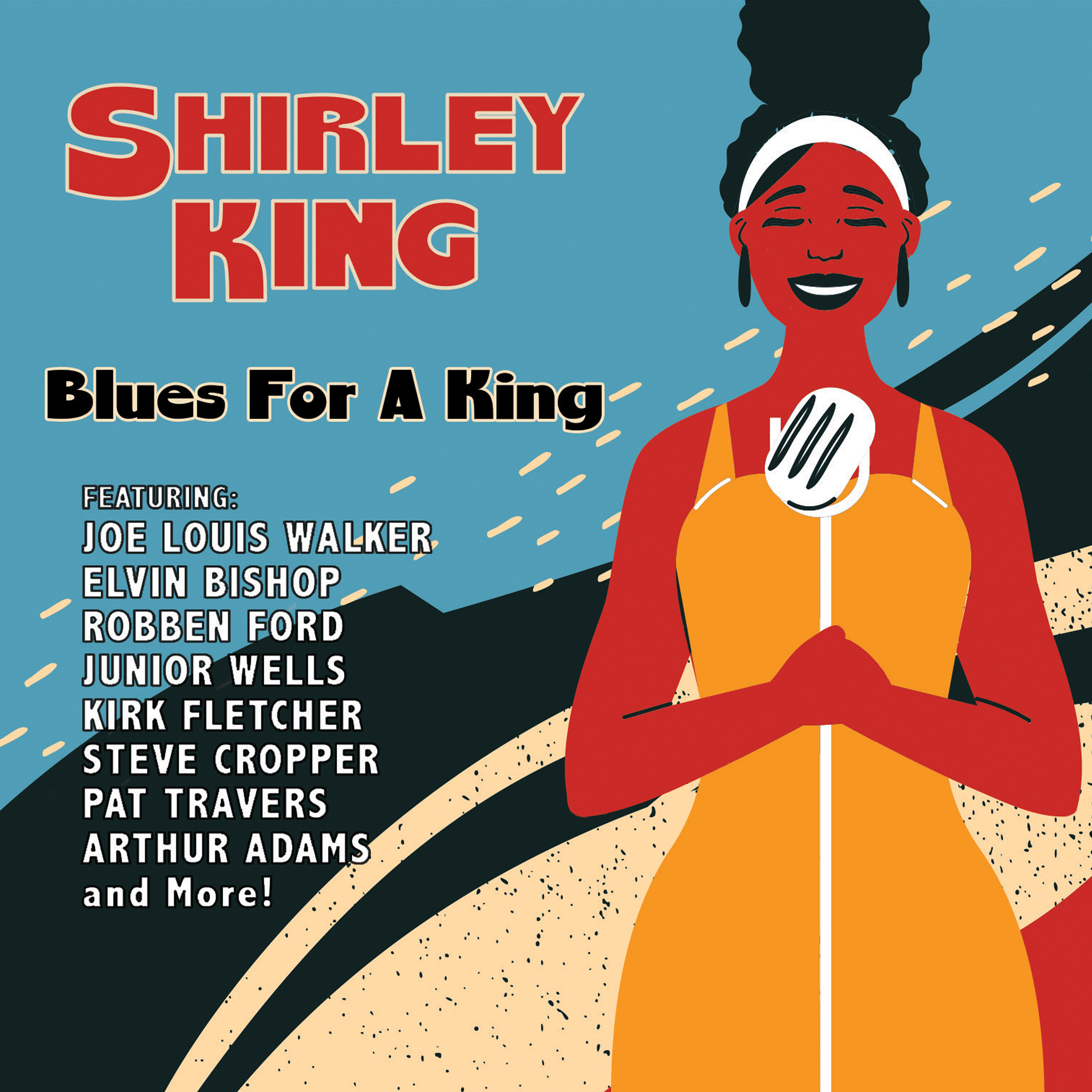 Parklife DC’s Ari Strauss had an opportunity to speak with Shirley by phone recently to discuss the new album, her career, and what it’s like to be the daughter of Blues royalty.

Ari Strauss: Shirley King, you’re a Blues singer like your father, but you’re not exclusively a Blues singer. So it would appear after previewing your new album, Blues for a King. I was expecting a pure Blues album but was blown away by the cross section of musical styles you covered. I’m thinking in particular about your rendition of one of my all-time favorite songs, Blind Faith’s “Can’t Find My Way Home.” You really jumped out of your comfort zone on this project. How did you go about selecting the songs you wanted to cover in this album?

Shirley King: Well, thank you. I sure would like to take credit for that, but the credit has to go to the project’s producer, John Lappen. John selected the songs and through his connections in the music industry, got all those great guitarists to play with me. I had nothing to do with nothing but singing. I went in the studio and when I saw the songs that they had selected for me, I started crying because I just didn’t see myself doing those songs. I mean, being a Blues singer, I was thinking they would give me Willie Dixon type songs and B.B. King songs. I looked at the list and told John, “If I hadn’t already gotten paid for doing this, I would’ve probably said, ‘No thank you.'” But I did it, and I’m so glad I did because the fear of not being able to think that was something I could pull off, I’m just amazed how it turned out.

[Editors note: John Lappen told Ari after his conversation with Shirley, “The label and I felt her voice is so powerful that she’d be able to sing a variety of types of songs. When listening to the Blind Faith song (Can’t Find My Way Home), we felt it would be a great song for her to do as [Eric] Clapton, [Ginger] Baker, [Steve] Winwood et al were obviously steeped in the Blues from early in their careers. We told Shirley to put her own soulful, bluesy spin on the song, and we think it turned out great. Great singers can sing just about anything and she’s a great singer!”]

John also said of the roster of guitarists on the album, “I’m fortunate to have relationships with a lot of great artists. All of the guitarists I chose for this album are not only great players, but they love the Blues and of course admire and respect B.B. King. So when I asked if they’d guest on Shirley’s album, they all said yes without reservation.”

Stream Blues for a King by Shirley King on Spotify:

AS: You’ve been involved in show business since the late 1960s, I read in your bio that you came to the Blues late, not until the 1990s, I believe. What were you doing up to that point?

SK: Well, I moved to Chicago in 1967 and that’s when it all took off for my career and I’ve been involved in show business since 1969. I knew back then I could sing, but I didn’t want to depend on singing to make a living because I didn’t know if I could be successful being that I would end up having to get a job. So, when I started dancing, I was a very good dancer and being B.B. King’s daughter, that worked good for people putting me on shows. So, eventually, I didn’t need his name to get the shows because as a dancer, that was my good talent that got me that.

So, I danced for 21 years, plus I had two kids and when I was dancing, I didn’t have to travel. I could stay right here in Chicago and work. That was the first reason I didn’t go into the Blues thing, but then after my kids grew up a little bit and I as I got tired of dancing after 21 years, I went and started hanging out on the Blues circuit, and since I didn’t want to get a regular day job, I saw Blues as a way of me making money and having fun, so that’s what I chose to do starting in 1990.

AS: What kind of dancing did you do for 21 years?

SK: Well, back in the day when Blues music — not Blues, but shows — I say shows because I never saw my dad on nothing but shows where there were emcees, dancers, comedians, and all that stuff. That’s the way our shows used to be. And so, when I came to Chicago, they were still doing it. Shows were classy here. You dress up really really good and you’d go into clubs and see performers, you would see dancers, actors; you would see anybody putting on a show. We didn’t just have a guitar player up there and “oh dee” all night. We actually had a variety in our shows and that gave me a chance to work. Plus, three was a man that was in charge of most of the shows here in Chicago who at the time was my dad’s manager, so my dad had him looking after me and keeping an eye out for me. Some people would like to call what I did [as being] a shake dancer, but I was told I was a contortionist because I did a performance and had a whole set during the show. 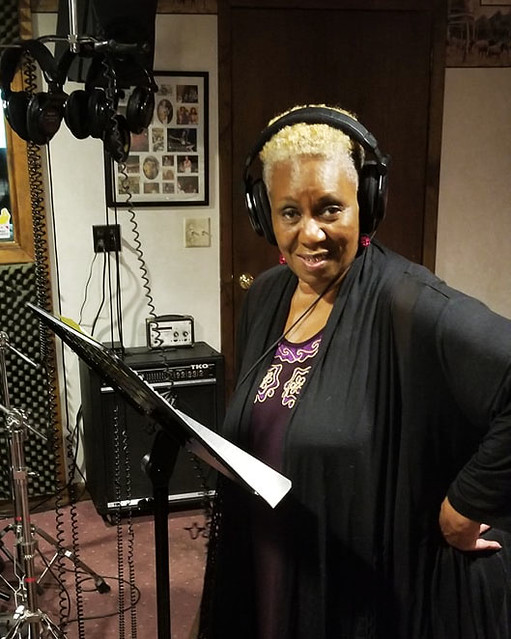 Shirley King poses in the studio during a break from recording her latest album, Blues for a King. (Photo provided by Shirley King)

AS: I have to imagine being a performer and a daughter of B.B. King has been both a blessing and a challenge. Can you talk a bit about how being B.B.’s daughter has been a blessing and how, maybe, it caused a challenge for you to get out beyond his shadow and make your own name?

SK:Well, from day one… it started out when I was a kid and my father was running around singing all the time. He was famous to a lot of people, but still, people didn’t get a chance to see him on TV and the radio during those early days so I had to go to school and be made fun of by kids that knew my father was famous and trying to figure out, “If your father is B.B. King, why don’t you live in Hollywood and have a limousine.” So, I started out in school defending myself for being B.B. King’s daughter.

AS: If not for the pandemic, did you have plans to be out on the road now to promote the album?

SK: So, we didn’t start recording this album until the end of September, and then they’ve been working on [the editing] for a while so I wouldn’t have been able to do anything until now anyway. Cleopatra had planned to release the album in May but couldn’t because of the pandemic, so they after the couldn’t do nothing else, they put it off until June the 19th, and I’m glad of that because its two days before Father’s Day and I’m honoring my father with this album. This is his Father’s Day present and its his present to me because I’m becoming who I am because of my dad and what he showed me and on Father’s Day I’m turning it back to him because I did what he told me to do.

AS: That’s really beautiful. I’m sure he’d be excited for you. Well, I hope things with the pandemic get better soon and you can get out on the road and perform. Have you played anywhere in DC in the past?

SK: Oh man, I was a regular act over at Madam’s Organ. That had so often as a regular I almost moved there. I mean, it was packed every time I played there — standing room only — teachers, politicians, and everybody was showing up in there because they were promoting it as B.B. King’s daughter. Then I did a tour once in all the states surrounding Washington DC, places like Falls Church, Virginia, and the like. I’ll have to pull out my old schedule and remember all the places. I got around a lot while my father was still living.

AS: Well, I hope you get out on the road again soon. I look forward to seeing you perform live. Thank you very much for your time today, Shirley.