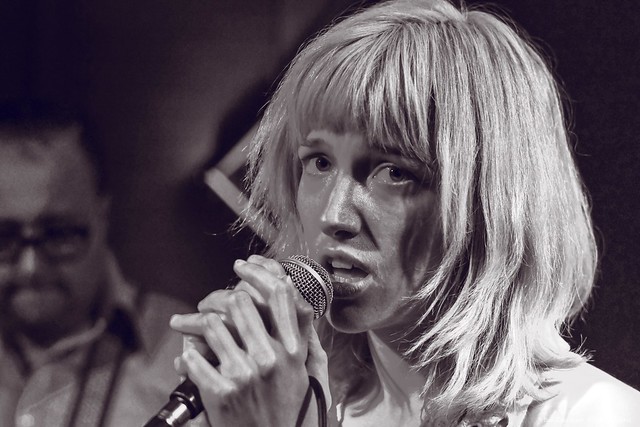 As you can hear from her recordings on Bandcamp, KAG fuses proto-industrial sounds with synthpop to create something very different from her former post-punk band.

Now based in Los Angeles, Katie Alice Greer has presented lo-fi electronic jams as KAG in the DC area prior to relocating. In March, she released two EPs — 3 Colors and No One Else on Earth.

The date was originally scheduled for July 3 but rescheduled due to technical difficulties. On Twitter at the time, Katie announced, “I will be live-streaming a musical. Performance on July 3rd… with We Fought the Big One. Maybe I can figure out how to play some new songs. I might clean my room. Don’t read my lyrics they are private.”

Stream No One Else on Earth by KAG on Bandcamp:

We Fought the Big One is DC’s highly unwieldy, Belgian-beer fueled celebration of left-of-center music for left-of-center people! Usually, WFTBO occurs on the first Friday of the month at the Marx Cafe with live music and djing as it explores the weird and wonderful world of DC’s underground music scene and beyond. You can expect John Peel-inspired DJ sets before and after Katie plays.

Join the party virtually for what promises to be a very memorable event!

Follow We Fought the Big One on Twitch and attend the show!

KAG
We Fought the Big One
Twitch
Friday, Aug. 7
Livestream begins at 10pm
KAG performs at 10:45pm
Free
All ages