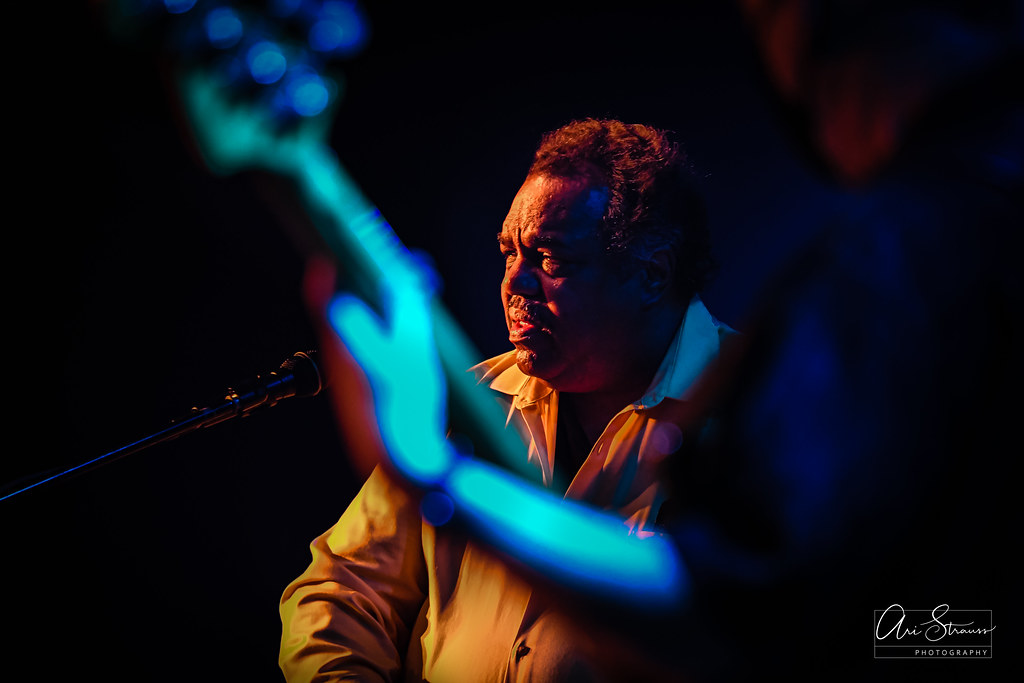 Daryl Davis and his band entertain music fans with a high-energy blues and rock & roll performance at The Birchmere in Alexandria, VA, July 11, 2020. (Photo by Ari Strauss)

A sight for sore eyes appeared on Mount Vernon Avenue in Alexandria, Virginia, this past weekend as the iconic Birchmere sign light up with news that it is once again open for business.

After a four-month hiatus since early March due to the COVID-19 pandemic, the legendary Northern Virginia music venue reopened recently at a limited capacity using enhanced health and safety measures set forth by the CDC and the Commonwealth of Virginia.

Parklife DC’s Ari Strauss went to see the Daryl Davis Band perform on July 11 and reviews his experience with photos of the performance. 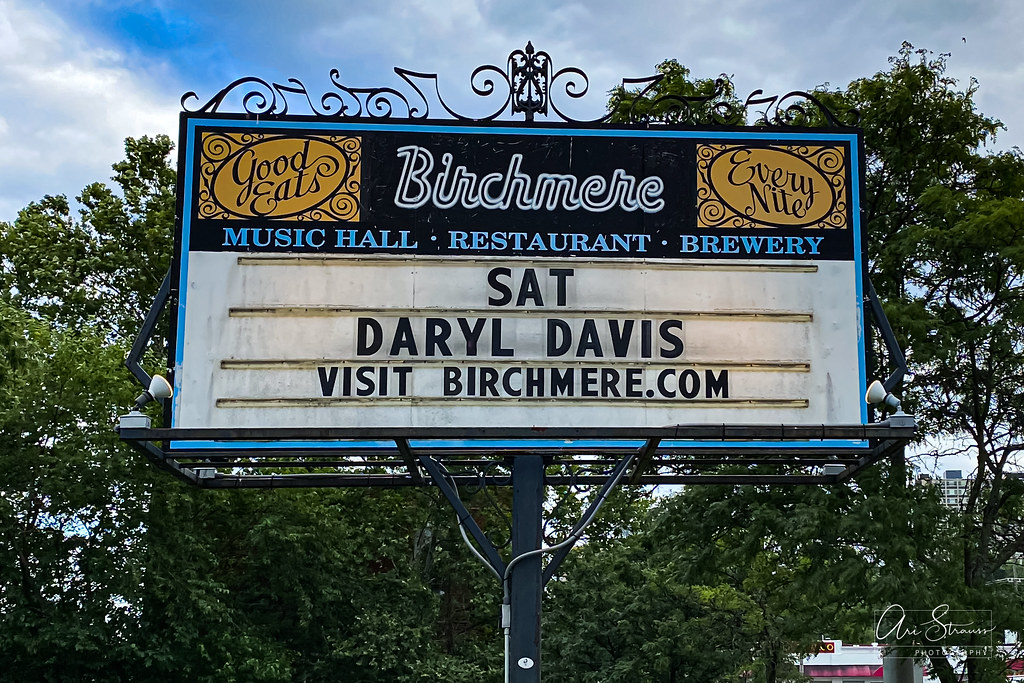 The Venue:
An institution in Northern Virginia, The Birchmere has been providing music fans with good food and live entertainment for the past 54 years. Now in its third location, The Birchmere consists of a supper club-style performance hall with seating for approximately 500 patrons, as well as an outer bar area with a standing room-only bandstand and dance floor. 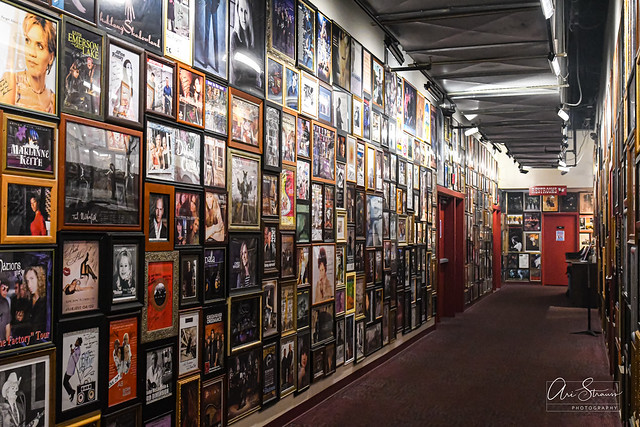 The foyer outside The Birchmere’s main music hall is lined from floor to ceiling with autographed photos of artists who’ve performed at the venue over the past 54 years. (Photo by Ari Strauss)

Once the Commonwealth of Virginia entered Phase 3 of its COVID-19 response, The Birchmere put out the word it was ready to reopen. Though operating at a much-reduced capacity, the venue announced to patrons via its website that it remains the “Same Old Birchmere,” providing free parking and requiring no minimum on food and beverage.

Seating in the main music hall is reduced by removing half the seats at each table and only seating patrons at every other table. The usable stage area is also reduced by several feet to ensure social distancing between the performers and the patrons seated in the first row of tables.

Everyone is required to undergo a temperature check upon entering the building and masks are required at all time when not seated at a table consuming food and beverage. 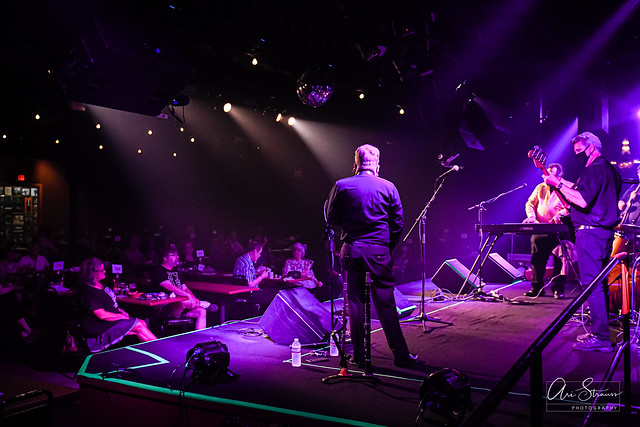 A view from stage-left as The Daryl Davis Band performs at The Birchmere, July 11, 2020. Note the inner green tape line reducing the stage area and ensuring proper social distancing between performers and patrons. (Photo by Ari Strauss)

Food/Beverage
While seating capacity is reduced, The Birchmere still offers a full menu of food, wine & beer, and soft drinks. I started with mozzarella sticks and had a black bean burger and fries as my entree.

Live Music
Daryl Davis is considered to be one of the greatest Blues, Boogie Woogie, and Rock ‘n’ Roll pianists of all time. In addition to leading his own band — The Daryl Davis Band — he’s played with The Legendary Blues Band (formerly the Muddy Waters band), Chuck Berry, B.B. King, Jerry Lee Lewis, John Lee Hooker, and Pinetop Perkins, to name a few.

But To know Daryl only as an exceptionally talented musician is to know just half of this extraordinary man’s story. I first met Daryl when he came to speak at my synagogue about his experience engaging with members of the Ku Klux Klan to improve race relations. You see, in his spare time when not playing music, Daryl befriends Klansmen and convinces them to leave and denounce the KKK.

Originally from Chicago, Daryl came to DC to study music at Howard University. Already a protege of legendary pianists Pinetop Perkins and Johnnie Johnson, Daryl has played with anyone and everyone in the soul/blues arena. He won a 2009 Washington Area Music Award (The Wammie) for “Best Traditional Blues/R&B Instrumentalist.”

For their Birchmere performance, Daryl’s band which consists of Zach Sweeney on guitar, Sam Goodall on base, Seth Kitbell on sax and clarinet, and Rob Howe on drums, played a cross section of rock, blues, and boogie woogie standards including Robert Johnson’s “Sweet Home Chicago,” Little Richard’s “Have Some Fun Tonight,” Chuck Berry’s “Johnny B Good,” and Johnny Cash’s “Folsom Prison.”

Daryl gave an impressive history lesson on the birth of the Blues and origins and technique of Boogie Woogie — left hand plays the boogie; right hand plays the woogie. He taught the crowd that every great boogie woogie pianist has their own unique “boogie” style and effortlessly rolled through them all with his left hand, “This is Fats Domino boogie, and this is Pinetop Perkins boogie, and this is Jerry Lee Lewis boogie…,” and so forth until concluding with, “and this is Daryl Davis boogie”

Ever the showman, Daryl showed off to the crowd by being able to play flawlessly with a large towel covering his keyboard. 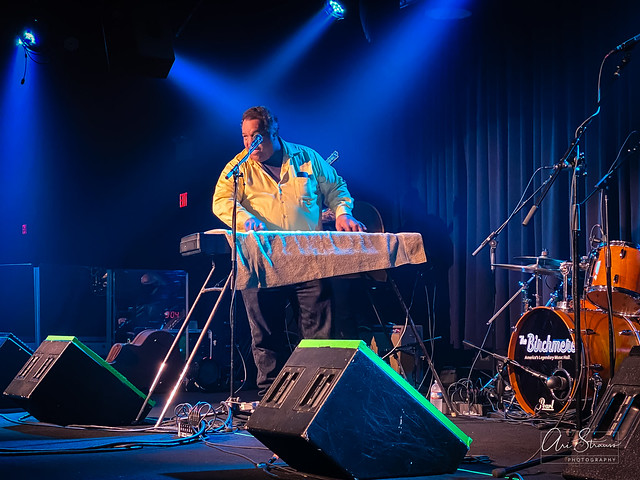 Daryl Davis impresses The Birchmere audience with his ability to play flawlessly while a towel covers his keyboard, July 11, 2020. (Photo by Ari Strauss)

The Birchmere has many other great local artists to perform in July and August. This weekend, come hear Skinny Wallace on Fri. July 17 and DC’s own Jumpin’ Jupiter on Sat. July 18.

Tickets for both shows are $15 and are available through Ticketmaster or at the Birchmere Box Office starting at 5pm on the day of the show.

Enjoy some additional photos of the Daryl Davis Band performance at The Birchmere on July 11, 2020. All photos copyright and courtesy of Ari Strauss. 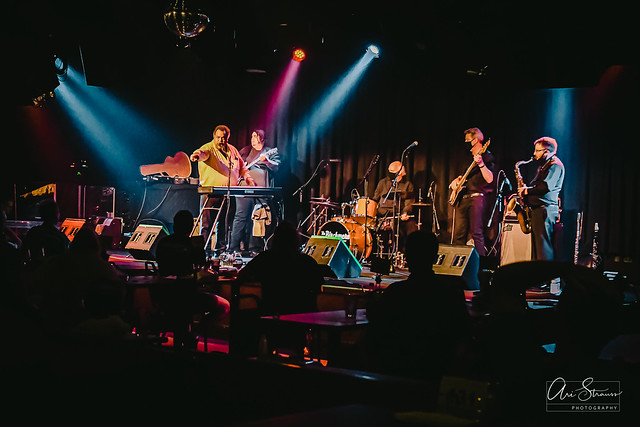 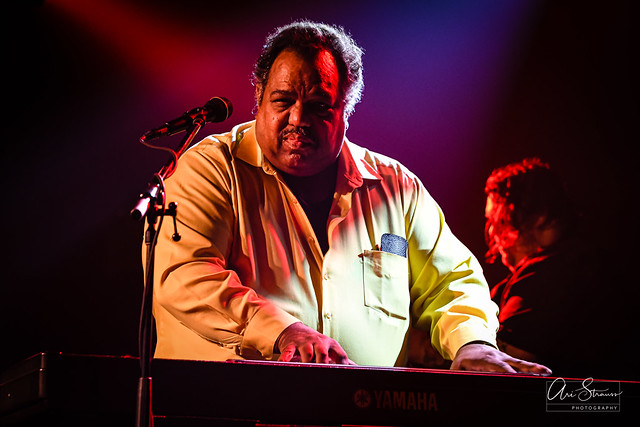 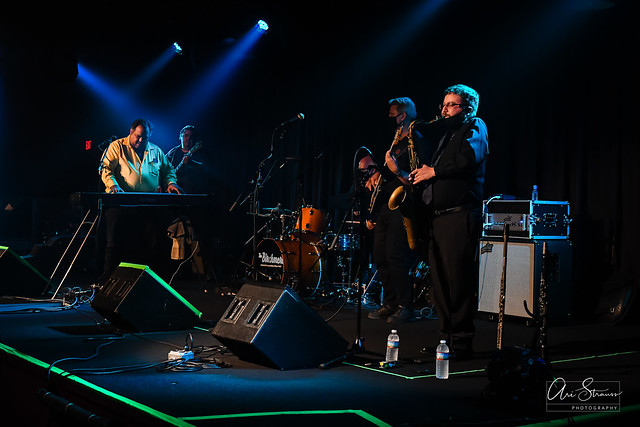 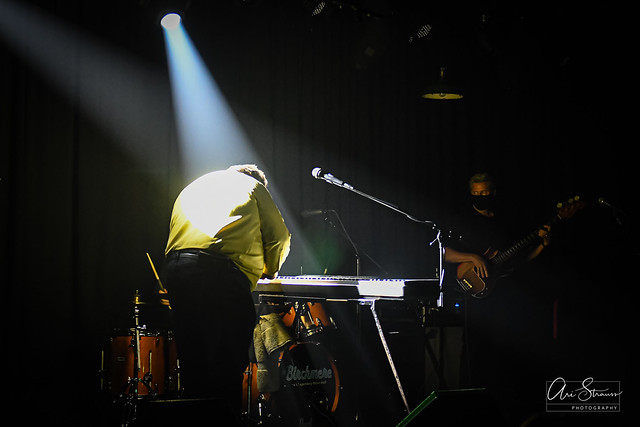 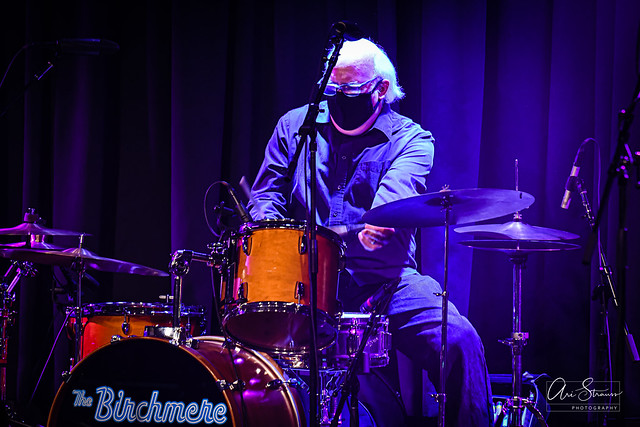 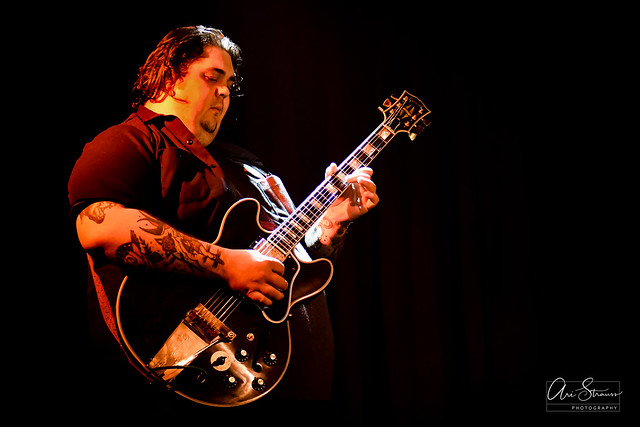 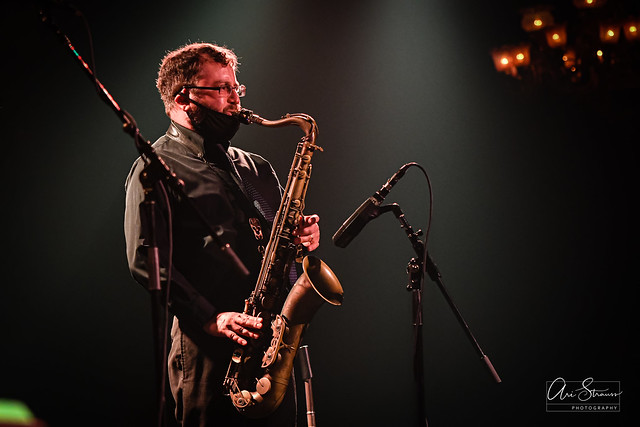 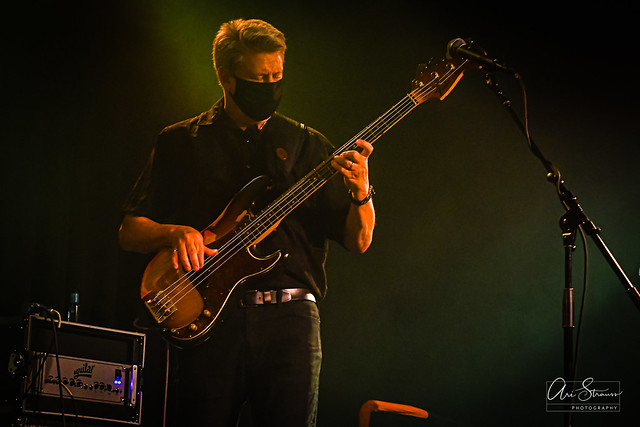 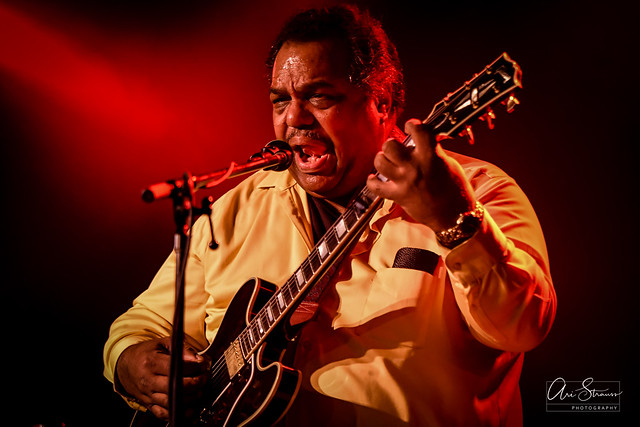