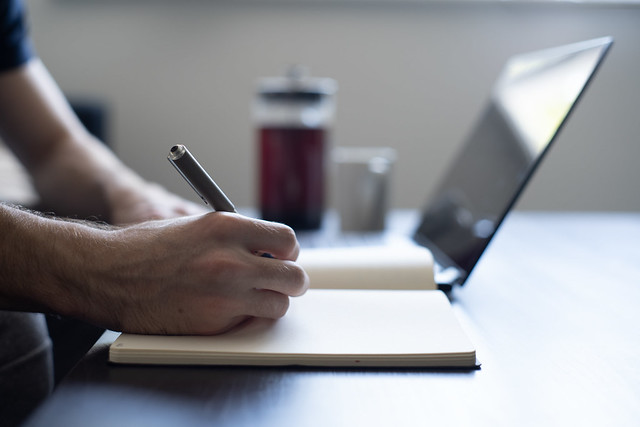 When I was just starting to write concert reviews, my editor advised me to find the story and tell it. That turned out to be great advice. A concert review should be more than just what happened. It should be unified, it should have a through-line. This is true for any narrative, fiction or non. In learning to tell the stories of concerts, I’ve become a better writer, not just of concert reviews, but of fiction.

There’s an old chestnut that the heart of a narrative is conflict. I can’t remember where she said it, but the great speculative fiction author Ursula Le Guin argued that change, rather than conflict, is the engine of narrative. Concerts, of course, don’t have conflict, except for the occasional rude interruption or heckling, but they do have change.

Capturing what changes is at the heart of a narrative about a concert. Switching instruments is change. Banter between songs is change. Different lighting is change.

The length of a review has more to do with the dynamism and change in the show than the length of a set. I’ve seen a band come out and do 30 songs, play for two-and-a-half hours — but there’s no stage banter, no instrument changes. As long as the set is, there’s just not much to say about it.

A set list is not a review. If you want to post a set list, there are sites for that. A review needs to capture the experience of the show. The audience, the sights and smells, the details that you can only get from being there.

I promised to explain how this relates to writing fiction. A story, as I emphasized, has to cohere. The writer has to pick the relevant details to build a scene. In no scene — fiction or non — are all the details relevant. Strictly speaking, it’s impossible to include all the details. It’s always a matter of choosing the right details to achieve a particular effect, a mood, or a certain impression.

Writing about concerts, I’ve become much more attuned to what those relevant details are in a scene. I’ve learned a lot about what is most salient in an experience, and how to capture that. I’ve also learned how to capture the subtle details that, while important, may go unnoticed or unremarked upon.

Like fictional stories, a concert (and a review of one) has characters. Some concerts are ensemble pieces, and others have clear main and supporting characters. Characters need to be developed and detailed in relation to their importance to the story. No matter how cool or interesting a supporting character is, they can’t receive too much attention.

It would be a mistake to say that a story or review should have a “point.” Narratives don’t naturally have points the way arguments or essays do. What they do have is unity. The writer pares away what doesn’t contribute to the unified effect.

In his essay, “Kill Your Darlings,” the author, critic, and teacher of creative writing John Crowley argues that that popular piece of advice is a mistake. As a technical writer by trade, I tend to cut to the very bone, and I’ve learned that in a narrative, this isn’t always a good idea. A narrative needs meaty, lush, engrossing detail. As Crowley argues, this thickness of description, while not strictly necessary to relating the story, is essential to making it enjoyable to read.

“Kill your darlings” should be replaced with the instruction to only include what is relevant. No matter how pared down, how bare the description, if a piece of information is irrelevant, it doesn’t belong. But, when something is relevant, sometimes a piece needs a wealth of description.

As a coda and a word of caution, I should mention that none of my fiction has actually been published (yet). Some of this is due to the share weirdness of it; I have a 2,200 word work-in-progress that involves Bugs Bunny, a hunchback, a vanilla ice cream bath, Jerry Lee Lewis, the Holocaust, space, back surgery, parachute pants, late-term abortion, Alice In Chains, rat mazes, M.C. Escher, The Myth of Sisyphus, bodily fluids, and Lyndsey Graham.

But I’m still sort of a “baby writer,” so I have hope.