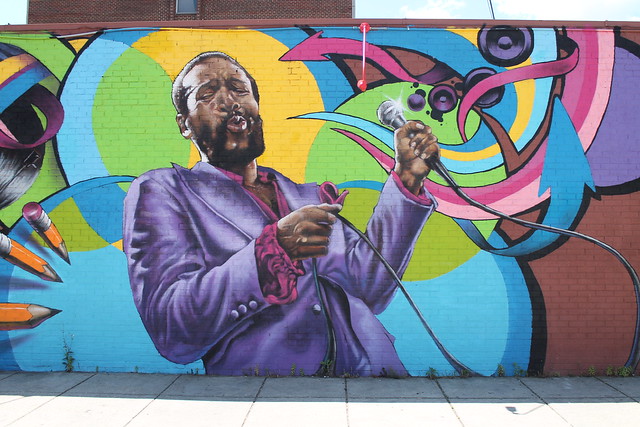 A Marvin Gaye mural by Aniekan Udofia in the 700 block of S Street, NW, DC (Photo by Elvert Barnes)

Recently, Rolling Stone released a new list of the 500 greatest albums of all time, releasing a wave of responses. These responses to the list largely focused on content of the list, on issues of representation and of the position of various genres in the canon of popular music. Almost nothing, however, has been said about the form and structure of the list.

I want to preface this discussion by introducing the concept of “social choice,” a term borrowed from political science and economics. “Social choice” deals with the formal problems involved in aggregating preferences in a group of people.

When there are more than two people and more than two options involved in a choice, it turns out that you can’t build a mechanism that guarantees that the most preferred option is chosen. The reasons for this are somewhat technical, but I can guarantee you that the mathematical proof of Arrow’s Impossibility Theorem is valid.

Why am I bringing this up? Because, while it doesn’t have the same implications as, say, an election, the selection of the Rolling Stone list is a collective action problem. There’s no way to aggregate the voting that guarantees a perfect ordering of preferences.

Rolling Stone allowed voters to list their 50 favorite albums. From these ballots, they listed the 500 highest-scoring albums. Here’s the problem with that method: Let’s say that, for all their disagreement on the top 50 albums, every voter agreed on No. 51.

Furthermore, suppose that, after working through all 300 ballots, slot 500 in the list came down to a single vote for an album in 50th place. One voter’s idiosyncratic choice would win out for the 500th slot over the preferences of all 300 for an album that would rank significantly higher if the ballots had an additional.

Some voters intuited this, and they voted strategically to take advantage of it. Stephen Thomas Erlewine has written that he didn’t vote for what were his 50 top albums, but rather for albums he hoped would make the list. He deliberately took advantage of the fact that, further down the last, idiosyncratic preferences become more and more influential.

It’s not that the system that Rolling Stone used to build the list is particularly flawed. Any way they did it would have introduced its own particular weaknesses. But it does mean that, the farther down the list you go, the less meaningful it becomes.