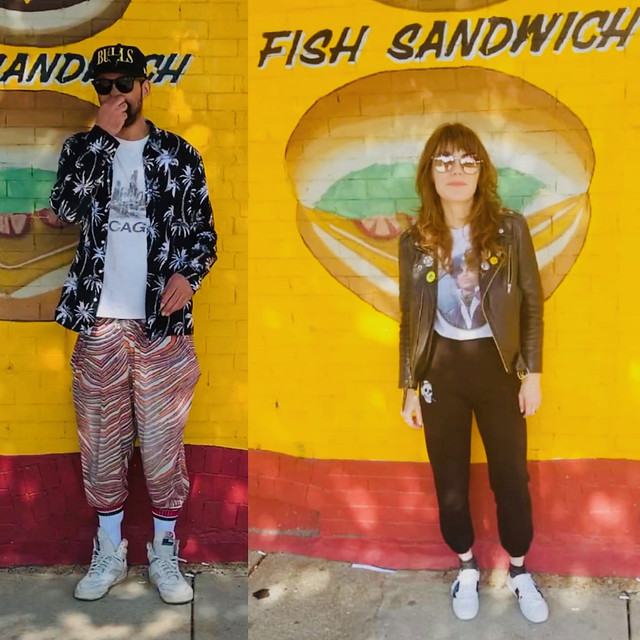 Jenny Lewis and Chicago-based rapper Serengeti (aka David Cohn) have announced an unexpected gift just ahead of the holiday season: “Unblu” – available now via Jenny’s own label Loves Way, with an accompanying video directed by Jenny.

“Unblu” was produced by Jenny and Andrew Broder.

In a note to fans, Jenny and Serengeti recall their fortuitous meeting and how their collaboration flourished despite quarantine lockdown:

Jenny met Dave down a long hallway in a former Communist Media Center in East Berlin during the People Festival of 2018. Dave asked Jenny to sing on a song about Tom Selleck passing on the part of Indiana Jones. Can you imagine a world where Tom Selleck is Indiana Jones?

A fast friendship was born as they skulked about, cracking jokes and chatting about their mutual love for boxing.

Jenny threw a show for Dave at Dino’s in East Nashville when they returned from Europe. The bartenders said it was the best show they ever had. Jenny was among the 9 fans that attended and danced their asses off.

To cap the torrid evening, Dave said “J, I need 7 tracks! Just piano or guitar or whatever!” Jenny inquired if one would do?

Then the world shut down and Jenny & Dave hunkered down in Los Angeles & Chicago, respectively. Jenny smoked weed every day and Dave stayed totally sober.

The result is five songs made on Jenny’s iPhone, for Dave. Beats, bass, drums, digital tanpura & topline, sent via text, ripe for Dave’s poetry. To accompany the music, Jenny made videos on her phone during the witching hours, editing while under the covers.

Then Jenny texted the tracks to another People alumnus — Andrew Broder in Minneapolis — who co-produced and mixed the songs, taking them from Garageband phone music to music that gently thumps you. Music to dance around your living room in a Day-Glo bathing suit to. Music to go bananas to while watching the news & Forensic Files on mute.

Thank you for reading this.

With the official music video for “Unblu” by Jenny Lewis and Serengeti on YouTube:

“Channeling Dolly Parton if she had been raised in Laurel Canyon, Lewis remains the master… As effortless as she manifested to begin the performance, that confidence left her audience thoroughly moved and entertained,” said the Austin Chronicle after a Jenny Lewis concert in 2019.