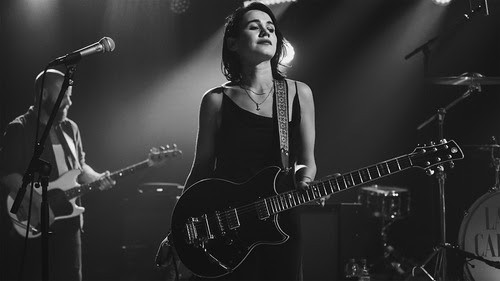 Berlin-based dark pop-rock songstress Laura Carbone released her third album, Laura Carbone – Live at Rockpalast on Dec. 4. The live recorded album was mixed by Scott von Ryper from The Jesus and Mary Chain and mastered by Phillip Wesling at Original Mastering in Hamburg, with no overdubs whatsoever, and reflects Laura’s unique brand of “Noisy Dreamadelica.”

After releasing the album’s lead single, Laura now follows up with “Cellophane Skin,” an empowering confession of sensitivity and a powerful statement on self-nurturing and on releasing rage and anger.

In a recent interview with Audiofemme, Laura explained how it was important for her to include the whole setlist on the album “to give the impression of being present at the show,” she said. “It’s so beautiful how we can feel when the band is warming up — I can hear it in my voice and how tense it was when we started — and I think it’s such a nice flow when the audience joins in and we start getting into the flow of the music.”

While everyone is missing the experience of attending live performances there’s no better time to witness Laura Carbone’s spellbinding talent, her arresting voice, silver-tongued lyrics, and her penchant for channeling 80s-90s dark wave pop than on this recording.

At the October 2019 show, “Cellophane Skin” was the first song of the encore, and the adrenaline is unmistakable. Laura and her band take the tribal tension of the original version from her celebrated 2018 album “Empty Sea” and infuse it with a caustic ferocity informed by dozens of shows in Europe and North America throughout 2019. The song undulates, throbs, detonates, withdraws, and then returns, building to do it all again to devastating effect.