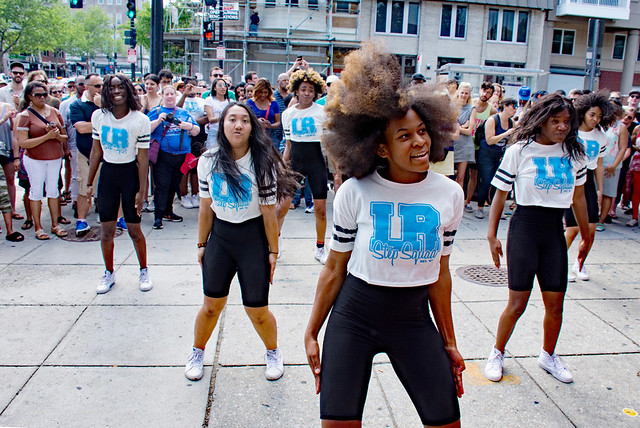 The Lady Raiders Step Squad perform at the DC Funk Parade on May 12, 2018. (Photo by Mark Caicedo)

After being forced to cancel the 2020 Funk Parade, The MusicianShip announced it is bringing the festival back for 2021 with a hybrid experience.

With a timeline for widespread vaccine access still uncertain, Funk Parade will forego its traditional Parade, Day Festival, and Night Festival in favor of virtual and smaller, socially-distanced events.

The 2021 Funk Parade festivities will center around celebrating the art, culture, history, and legacy of Black Broadway and will feature a Funk Parade-themed beer produced by Aslin Beer Co. Festival events will be delivered in partnership with entities including Ben’s Chili Bowl Foundation, Black Broadway on U, District Bridges, StreetMeetDC, Eaton Workshop, and more.

“While we’re disappointed we can’t bring Funk Parade back in its familiar format in 2021, we’re excited to work with our partners to showcase Black Broadway in fresh and innovative ways. We’re committed to keeping the funk alive and celebrating the rich history of the U Street Corridor with everyone in our community,” said Jeffery Tribble, Jr., Executive Director of The MusicianShip.

Watch Batalá Washington leading the DC Funk Parade on May 11, 2019, in this video by Marly Perez on YouTube!

More details about Funk Parade’s 2021 events and scheduling will be available soon.

Funk Parade programming is supported by The MusicianShip, a D.C.-based nonprofit that is focused on changing lives with music. Proceeds from the Funk Parade help support The MusicianShip’s free-of-charge music programs that serve over 1600 youth and continue to be a resource for local D.C. artists and musicians. In addition to Funk Parade, The MusicianShip is the home of the Wammie Awards and The Washington Youth Choir.

One thought on “Around Town: Funk Parade to Go Virtual in 2021”