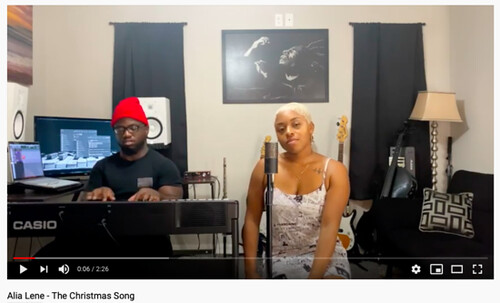 Alia Lene released a special version of “The Christmas Song” recently on YouTube. The track is taken from her Christmas Miracle EP released Dec. 11 on Contra Worldwide Recordings.

The EP sees a modern take on Christmas classics like “Santa Baby” and “Drummer Boy” and the title track is featured in the BET holiday movie ‘Twas The Chaos Before Christmas.

Alia Lene is poised to make her mark on the musical landscape. The Minneapolis-born singer songwriter has just six singles under her belt and is starting to see some impressive social media plays and radio spins across the country with the track ‘Morning’ seeing over 500k views on Facebook and over 250k streams on Spotify. Her current single ‘Die For You’ and her previous single, ‘You Ain’t Ready’ have both surpassed the 300k mark on Spotify. Her soulful voice and sharp production make her a stand out in the pack. Her creations are all her own, she is a multi-instrumentalist as well as a producer and engineer and people are already starting to take notice with some key placements: Her music can be heard in Tyler Perry’s hit comedy Sistas on BET, as well as their holiday movie ‘Twas the Chaos Before Christmas.’ Her debut album, expected in spring of 2021.