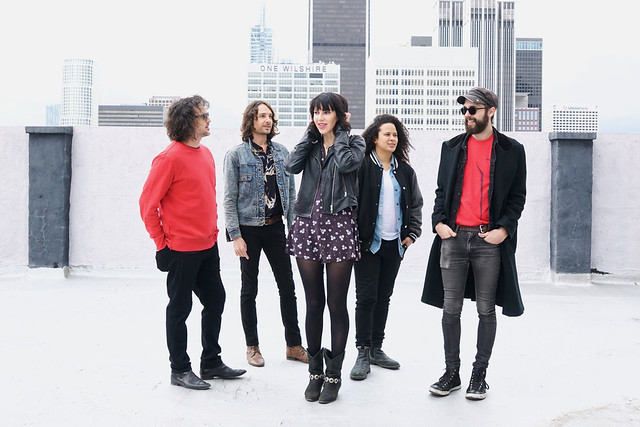 Lonely Archer Records and Los Angeles-based dream-pop quintet Nightjacket are pleased to present “Burn Through the Atmosphere,” the latest track to be lifted from the Friday, May 21 release of the band’s forthcoming EP, Following the Curves.

Representing a turning-of-the-page for the band, Following the Curves introduces its new vocalist, Canadian-born Andrea Wasse (Digital Daggers, DeadXLife). Recalling the haziness of ’80s and ’90s touchpoints such as The Cocteau Twins, Mazzy Star and The Sundays, Following The Curves is also a personal exercise in chemistry and musical partnership.

“Burn Through the Atmosphere” is a gorgeous, ’90s-inspired song about being at the point in a relationship when you can sense that the end is near (and realize that your time is fleeting). It’s about trying to let go of a once-shared dream with as little bitterness as possible, urging the former lover to just “fly on.”

Stream “Burn Through the Atmosphere” by Nightjacket on Spotify:

After hearing a few demos sent by guitarist Jordan Wiggins, Andrea zeroed in on what would become the song “Lonely Archer,” a channeling of idols such as Hope Sandoval and Neil Young when composing lyrics and melody. Upon meeting Wiggins and multi-instrumentalist Louie Schultz for the first time in person, Andrea recorded vocals for “Lonely Archer” that very day at Louie’s studio in Eagle Rock, California, and an instant partnership was born. Additional songs quickly followed, ranging from the psychedelic Americana of “Lucky” to the analog synth-fueled “Burn Through the Atmosphere” and the jangly, alternative pop of “Just a Little,” which will all be featured on the upcoming collection.