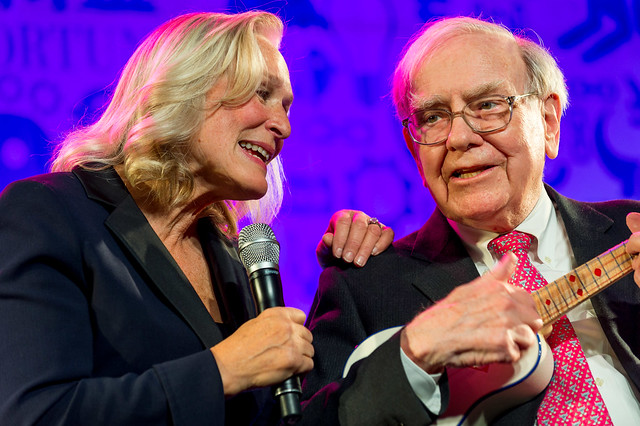 Glenn Close with Warren Buffett at Fortune The Most Powerful Women on Oct. 15, 2013, in DC. (Photo courtesy Fortune Live Media)

It was a scripted comedy routine at the 93th Annual Academy Awards, but it was still all kinds of awesome to see accomplished actress Glenn Close name-check go-go bands Experience Unlimited and Backyard Band at the Oscars ceremony on Sunday.

Yesterday, The Los Angeles Times reported that it “confirmed that Close’s twerk-tastic performance was part of a scripted bit designed for laughs.”

But it was still amazing to see Glenn, nominated as Best Supporting Actress for her role in Hillbilly Elegy, field a trivia question from comedian Lil Rel Howery, who engaged celebrities in a music trivia competition with some assistance from Questlove, himself a regular guest at DC-area venues.

Lil Red quizzed nominees on whether a song was an Oscar winner, simply an Oscar nominee, or not nominated at all. He asked Andra Day about Prince’s “Purple Rain,” and she correctly responded that it was not nominated for an Oscar. He then asked Daniel Kaluuya about Donna Summer’s “Last Dance,” and the actor wrongly guessed that it was merely a nominee (although to be fair, this was a scripted bit, right).

In what seamed a totally natural interruption, Glenn said Daniel would be too young to know Donna Summer, which prompted Lil Rel to hit her with a question about “Da Butt” by DC go-go stalwarts EU.

Watch the entire quiz routine ending with Glenn Close promoting go-go and the DMV during the Oscars on YouTube:

“It was a classic song by the great Washington, DC, go-go band EU. Shout-outs to Sugar Bear and the Backyard Band and the whole DMV.”

Glenn went on to explain that Spike Lee commissioned the song for his movie School Daze, and that it wasn’t nominated for an Oscar. In an then unscripted moment (as confirmed by her publicist), Glenn then danced to “Da Butt.”

Although it was a routine, we here at Parklife DC are big admirers of Glenn Close, the Oscars, and go-go music, so it was a terrific moment all around.