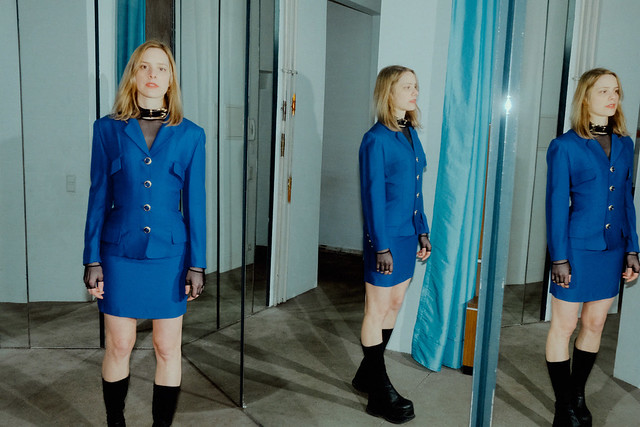 Anika — the project of Berlin-based musician Annika Henderson who is also a founding member of Exploded View — announces signing to Sacred Bones and returns with a new single/video, “Finger Pies.”

Released in collaboration with Invada Records, this is Anika’s first new piece of music in 8 years, following her 2010 cult-favorite Anika, and the 2013 Anika EP. “Finger Pies” presents Anika’s alluring voice, which switches between singing and speaking over bass, waning brass, drums, and blares of synth.

The accompanying video was co-directed by Anika with Sven Gutjahr (who has worked with Versace and Holly Herndon). The two had lived in the same apartment building in Neuköln, Berlin, during 2017 yet never met. Fate, and a bunch of people around a table 3,965 miles away brought them together for the video. It shows Anika effortlessly contemplating her adopted city with a cinematic coolness.

Watch the official music video for “Finger Pies” by Anika on YouTube:

Anika said, “A song that never had a name, like an artist that never had a face. Caught between roles, a jack of all trades, she slips between your fingers like a moment that never was, or was it? So many faces tailored to a myriad of occasions. Walls built between ourselves and the outside world. For protection. Passes grant access to another level. So where are you at? Those with all the keys, please remember, access comes with responsibility. Yet responsibility has been lost, like tissue paper in the rain, a battle without rules, to save face, exploit weakness, to save getting slayed, by the faceless generation. Welcome to the world of ‘Finger Pies.’”

When asked to describe the circumstances that influenced her beautifully fraught new work, Anika quickly articulated a set of feelings and unpredictable circumstances that are familiar to anyone who tried to make art — or simply tried to live through — the recent global pandemic. “It’s a moment caught in time,” she said.