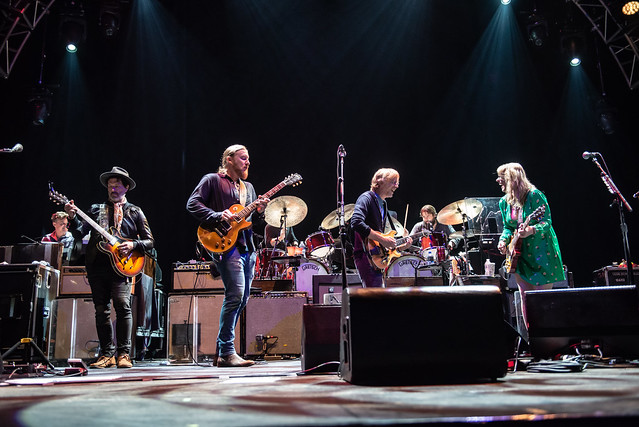 Tedeschi Trucks Band featuring Trey Anastasio share a smoldering live performance of the Derek & The Dominoes classic “Nobody Knows You When You’re Down and Out.”

With masterful solos from Derek Trucks, invaluable TTB collaborator Doyle Bramhall II, and Trey Anastasio — not to mention a smoky, passionate vocal from Susan Tedeschi — the track is exemplary of the fiery chemistry and intoxicating musicianship on display on Layla Revisited (Live At LOCKN’), the new TTB live album out July 16 on Fantasy Records.

Watch Tedeschi Trucks Band and Trey Anastasio perform “Nobody Knows You When You’re Down and Out” live at LOCKN’ Festival on YouTube:

Recorded on Aug. 24, 2019, at the LOCKN’ Festival in Arrington, VA, Layla Revisited (Live At LOCKN’) captures an enthralling surprise performance that finds the Tedeschi Trucks Band — with Anastasio and Bramhall in tow — paying tribute to Layla and Other Assorted Love Songs, the 1970 masterpiece that finds legendary guitarists Eric Clapton and Duane Allman in unparalleled form. The cosmic connections run deep: the original was not only released on the day of Susan Tedeschi’s birth, it inspired Chris and Debbie Trucks to name their firstborn son Derek.

Decades later, Derek Trucks would enjoy a fifteen-year tenure as a member of The Allman Brothers Band, and tour extensively with Clapton. The resulting album is pure kismet: A lively, adventurous interpretation of one of the 20th century’s most singular rock & roll recordings.