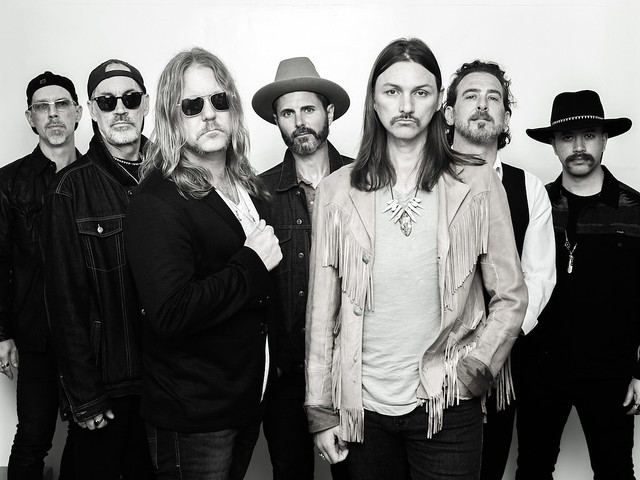 The Allman Betts Band are on the road, and they will perform at The Birchmere on Sunday, June 13!

This must-see fusing of impressive musical talent was fated before the band was even born. You see, bandmates Devon Allman, Duane Betts, and Berry Duane Oakley are the sons of their namesake founding members of the Allman Brothers Band ( — Gregg Allman, Dickey Betts, and Berry Oakley, that is).

When The Allman Betts Band released Down to the River in June 2019, the debut album represented not only the first time the group had recorded together, but, in fact, the first time the seven-piece ensemble had ever played together. If Down to the River was the sound of the band’s combustible sparks igniting, then Bless Your Heart is their bonfire, built for the summer of 2020 and beyond; a double-album follow-up fueled by road-forged camaraderie and telepathic musical intensity, vibrantly reflecting the individual and collective experiences of these seven, all drawing inspiration from the band’s symbolic hometown — a place Devon Allman calls “the United States of Americana.”

Watch the official music video for “Pale Horse Rider” by The Allman Betts Band on YouTube:

A conflagration of influences and invention, confidence and ambition, Bless Your Heart captures a vast, panoramic scope throughout a baker’s dozen of modern rock. Ragged and stomping. Heady and frayed. Soaring and scorching. Generational and genteel. West Coast scenes and Gulf Coast shores. Gateways of the Midwest and swamplands of Florida. Wyoming’s Big Sky. New York’s Big Apple. Chicago’s Broad Shoulders. Among the fiery set is “Magnolia Road,” a semi-autobiographical overview of Allman and Betts written, ironocally, by Vaughan alone, and a tie-dyed contender for summer festival favorite.

There is the album’s starter, “Pale Horse Rider,” ominously evolving into a dark and dense rumbler accentuated by an unbridled storm of guitars, evoking the spirit of Neil Young’s Crazy Horse and modern counterpart, My Morning Jacket. And “Ashes of My Lovers,” a mourning motif of romance and wreckage, inflected with trail-dusted harmonica complementing the cinematic Badlands spook. Or “Airboats & Cocaine,” with its tongue firmly in its cheek, telling the Southern Gothic tale of a girl born into the wrong family and her guy regretting his incidental associations with the underbelly of swampland contraband, wrapped up in a loose, mid-tempo stinger.