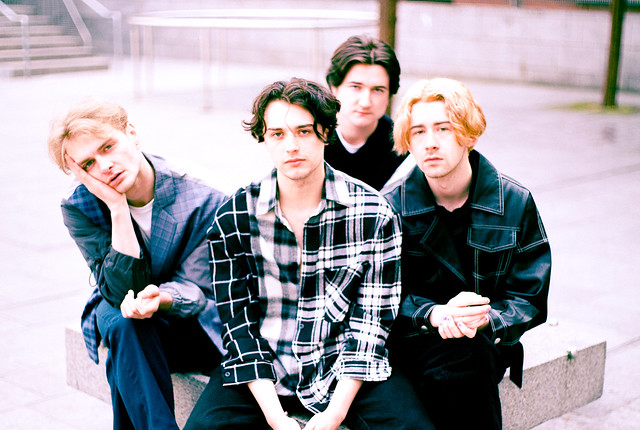 modernlove. are still figuring it out and that’s okay. Like their name suggests, the Irish four-piece explores the complexities of the modern lives of twenty-somethings. Even though their lives are still complicated, Barry, Cian, Danny and Graham of Drogheda have already nailed their sound; they deliver polished, indie-pop with a glossy ’90s sheen and intricate details.

Recently, the band announced their debut EP “monochrome blue” and shared the new single. “lmk (if you wanna see me)” along with a music video.

The band’s EP is due Sept. 1 on Akira Records (Henry Green, Zola Blood, Shura, CHINAH). Each of the six radio-ready tracks confronts issues like romance, rejection, 21st-century communication and the daily impact of all three.

Amid swirling synths, mechanical vocal effects, and rapid-fire percussion, “lmk (if you wanna see me)” evokes a feeling of being simultaneously overwhelmed and isolated. The accompanying video echoes the sense of detachment as the camera drifts in and out of focus on the lead singer sauntering then chasing something he’ll never reach.

The band say about the song: “‘lmk (if you wanna see me)’ is about a formative period of your life ending. We wrote it during lockdown which inspired the somber, detached feel of the song.”

Watch the official music video for “lmk (if you wanna see me)” by Modernlove on YouTube:

“lmk (if you wanna see me)” will be the third single on the EP, following on from “Liquorice” and “Bop,” both of which received strong playlist support, landing on NMF UK at Spotify, as well as Fresh Finds, Alt-Pop and The Pop List. Radio has come via 2FM, BBC Ulster, XS Manchester, Across the Line and Radio X. They have a BBC Introducing session plus interview coming with this release.