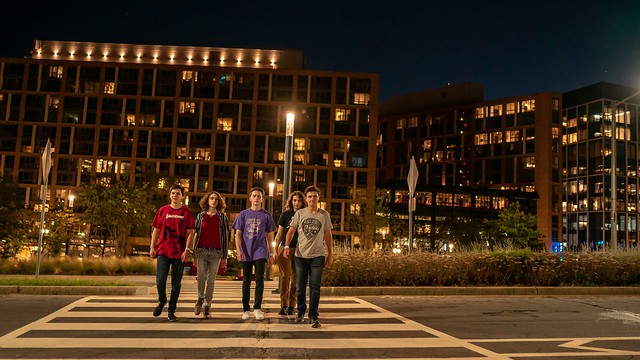 On Friday, Aug. 20, DC rockers One Way Out take their energetic live show to Union Stage. That same day, the band releases their sophomore full-length album The Sun, The Moon, The Truth!

After touring with Soraia of Steven Van Zandt’s Wicked Cool Records in 2019 and being nominated for Best Hard Rock Artist in D.C. alongside names like Clutch before most members had turned 18, One Way Out returned to the studio with producer Ben Green of Fairweather (Equal Vision) to record The Sun, The Moon, The Truth, which will be available to stream everywhere on Aug. 20.

The album combines the band’s eclectic influences including classic rock, punk, blues, jazz, neo-psychedelia, and hip hop to create one multifaceted work that never rests on one sound for too long before moving on to the next. Singles “Black Lungs (and a Broken Heart),” “Red,” and “Candy” — which was recently placed in the New York Times’ Summer 2021 Playlist — exemplify this, moving seamlessly from space rock freak out to bluesy pandemic anthem to gritty garage-punk madness respectively.

Last week, One Way Out released the album’s fourth single, “Slow Walk,” combining the mellowness of a piano ballad with the shrieking vocals and searing guitars that have become a staple of One Way Out’s sound. Lead singer and lyricist for the tune Josh Gaba delivers an intimate performance, setting a gloomy scene with the opening line “Slow walk / I can’t wait to be alone” before belting into the song’s hook, “I’ll wait for you.”

Stream “Slow Walk” by One Way Out on YouTube:

One Way Out is a young rock band from DC known for their eclectic style — a meld of classic and blues-inspired late ’60s/early ’70s rock with progressive elements inspired by metal, hard rock, and jazz. The band also takes on the aggression of punk emanating from the local DC scene and the philosophies of more modern acts, such as King Gizzard and the Lizard Wizard, Oh Sees, and Tame Impala. One Way Out has received six finalist nominations at the Wammies (Washington Area Music Awards) for Best Rock Album, Best Hard Rock Album, Best Hard Rock Artist, and Best Hard Rock Song.