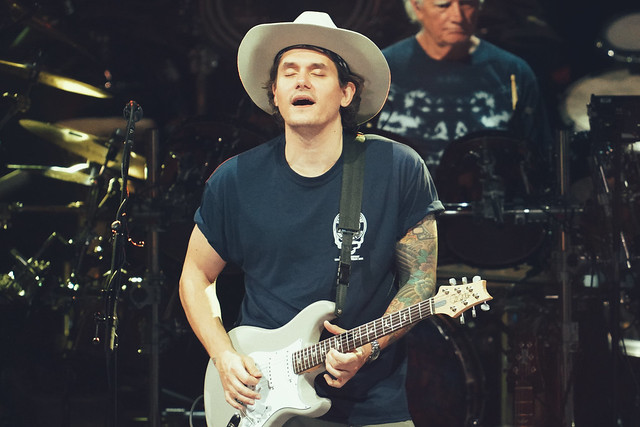 What’s not to be appreciated about a musical act — more so a community and now essentially a culture — that has stood the test of more than 55 years? Nearly six decades after a band calling itself The Warlocks randomly switched its name to Grateful Dead, the most current amalgamation of some of the group’s original members and carefully chosen friends can still draw thousands of people together for a kaleidoscopic celebration of music.

Dead & Company rolled into Bristow, Virginia, last week for a show at Jiffy Lube Live, their second stop of the current tour, and created two robust sets of songs that not only paid tribute to the large family of musicians and songwriters that is the Grateful Dead, but gave many of the band’s songs a refreshing new twist that brought out the best in the group gathered on stage.

Now featuring the at-one-point unthinkable presence of guitarist John Mayer, this version of the Dead needs to be appreciated for much more than just the song selection and execution — it’s so much more than that. Eventually formed in 2015 following a meeting between John and Bob Weir, a founding member of the Grateful Dead, Dead & Company has been touring every year since and they’ve had no problem packing large-capacity venues as was the case on Aug. 18 at Jiffy Lube Live.

Taking the crowd of all ages through what felt like a collection of adored Dead hits, the six-piece group produced a sound that was unique while still channeling the spirit of those who were once part of the band but have departed for the other side — including organist Pigpen McKernan, pianist Brent Mydland and, of course the legendary Jerry Garcia.

Garcia himself would likely show an enthusiastic sign of approval for John Mayer, who came over from a totally different realm of music to find his place among some of the most respected touring musicians on the globe.

But once any traditional Deadhead has accepted him, and most absolutely should have long ago, he stands out for what he really is — a like-minded, otherworldly talented guitar player who clearly has a love for this music, which is why he began practicing it religiously several years before Dead & Company was even formed.

That hard work shows, as the youngest member of the group is essentially its brightest star instrumentally. Seemingly a different version of the pop icon many have come to know, Mayer on stage with Dead & Company is on another wavelength with his guitar and that comes out in his wild and entertaining facial expressions, clearly putting himself right into the music and unashamed of the emotions that produces in him. His focus and mannerisms were that of a man who is inseparable from his instrument — only the planet’s most talented, most seasoned guitar players can do what Mayer does on a nightly basis with Dead & Company, and John had already put himself into the conversation with his solo work.

Mayer arguably looked his most at home during a take on “Don’t Ease Me In,” his playful demeanor and ability to slide into a honky-tonk persona — seems like his voice just wants to go there — add an energetic generosity to the stage that might have diminished in the Grateful Dead’s late years.

Watch the Grateful Dead perform “Don’t Ease Me In” live during the Festival Express tour in 1970 via YouTube:

As a guitar duo, John and Bobby showed some of their most powerful synergy during an 18-minute rendition of “Bird Song.” You didn’t have to stare at their interaction but just listen at any given moment to know there is something special between them. This song, which went directly into the next, and later “Sugar Magnolia,” also showcased Bobby’s distinguished, rustic voice that sounds like it careens out of the mountains or the valleys.

And Weir may be one of the most admirable men in music given all he has under his umbrella at the moment, and though he might not be as nimble as he once was, he is meticulous and crisp and his chords still have an unmistakably resounding quality, and that authenticity boosted many of the songs last Wednesday. Committed to his physical health (his social media accounts well document his workout routine), Bob carries on the Dead tradition not only with Dead & Company but also as a solo artist and his 2016 album Blue River is a truly beautiful offering.

Kreutzmann and Hart remain two machine-like veteran warriors of their craft, and they got to celebrate it with the “Space>Drums”, which whether you love a drum workout of that duration or not, turned the entire venue into an interstellar party bus the size of a small city, and this provided the opportunity to take in what was a masterful light show. Underneath it, pounding away — Bill and Mickey, two men who have spent more than 50 years at these kits, on these sort of tours, and their presence at Jiffy Lube was like two soothsayers or shamans orchestrating almost out of site at times given the monstrous setup each man had constructed around him.

Oteil Burbridge, who has played with the likes of countless high-profile musicians and bands, fits in naturally like Mayer. The jovial, rubbery fingered righty is like the prototypical bass player to handle long jams that bounce and groove through infinite space and back again. He is extremely fast, and his notes reverberate with a vigorous quality as he added a healthy, muscular presence to the mix on stage.

And finally, there was the under-appreciated Jeff Chimenti, who at times stole the show Wednesday night, but in subtle fashion from way over on the left side. He can flutter and go unnoticed and then his notes effortlessly find their way into the gaps, and they are truly gorgeous and timely.

And what might be most impressive about the Jiffy Lube Live show, and perhaps underappreciated today across live music in general, is the bang for the buck: this band played for almost three hours — on a school night. Dead & Company, after an incredible first set, including the likes of a “Cold Rain and Snow” opener followed by a 14-minute “Feel Like a Stranger,” delivered yet another complete, rewarding collection of tunes.

Watch a preview of Dead & Company’s opener at Jiffy Lube Live on YouTube:

Accelerating the second set, an ear-pleasing Cumberland Blues reminded why it is a quintessential Dead track, one that clearly stands out on the beloved Europe ’72 tour recordings. Anyone on hand in Bristow had to love this song, a track that starts on a boogie like it’s already knee-deep in jam, and that’s because it is. Even if the younger bucks were doing a lot of the heavy lifting for Dead & Company, it was still a remarkable sight to behold and the improvised sound, as well as the communal and triumphal atmosphere, translated to an unforgettable live experience.

Slowing the pace for a stunning, heartrending take on “He’s Gone,” a song written decades ago following the death of Pigpen, Bobby’s voice again comforted the crowd with a reminder of who they were watching. As John and the rest of the band joined in singing the famous line “steal your face right off your head,” the stage lit up in red, white and blue with the classic Grateful Dead “Stealie” logo for what was one of the most memorable and visually appealing moments of the night.

Here are photos of Dead & Company performing on Aug. 18, 2021, at Jiffy Lube Live in Bristow. All images are courtesy and copyright Casey Vock. 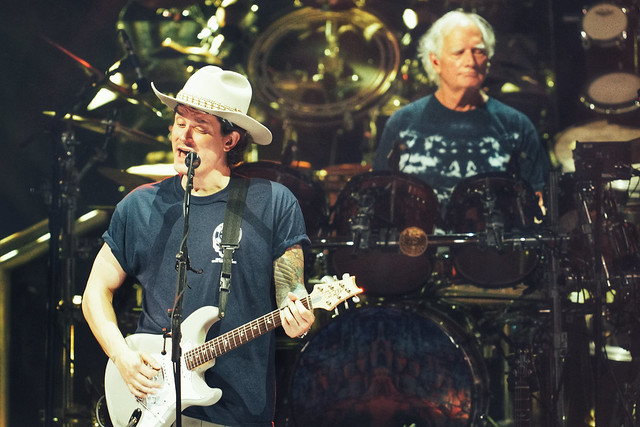 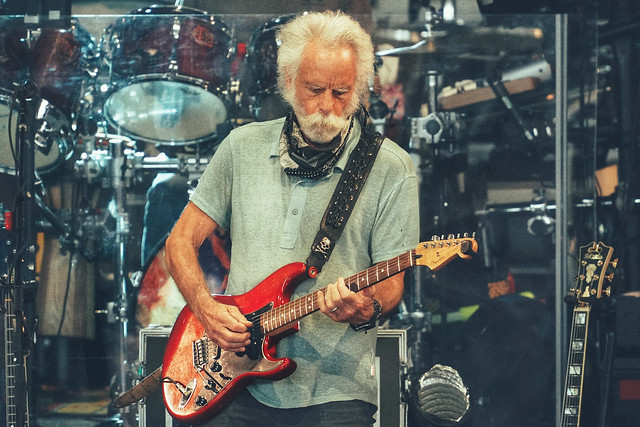 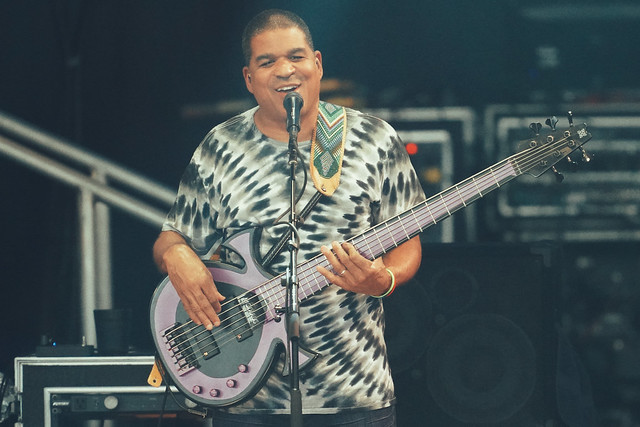 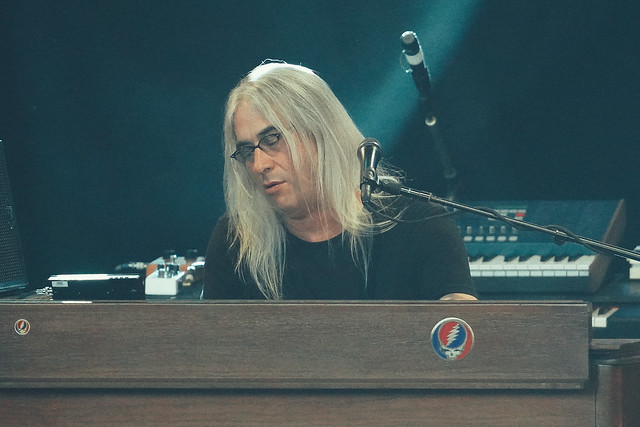 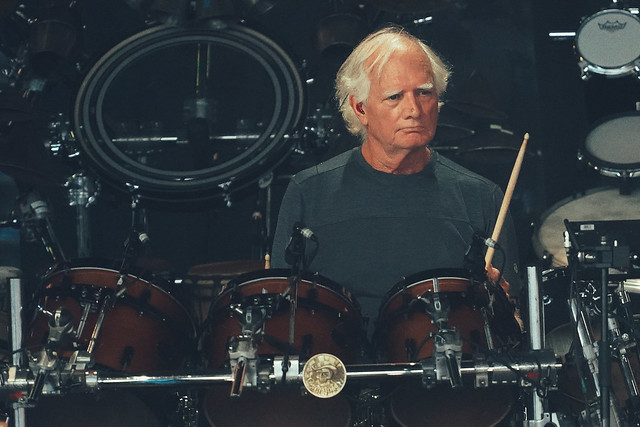 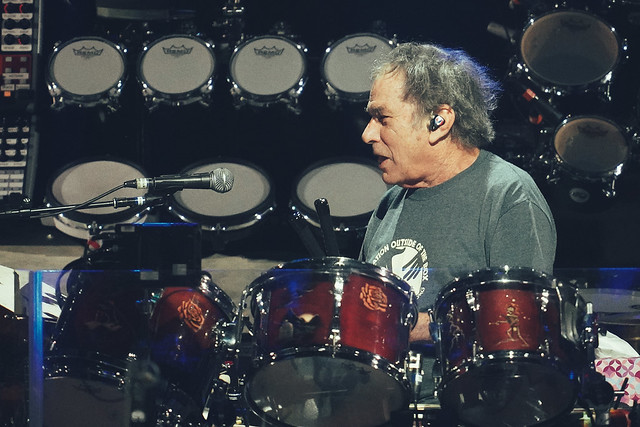 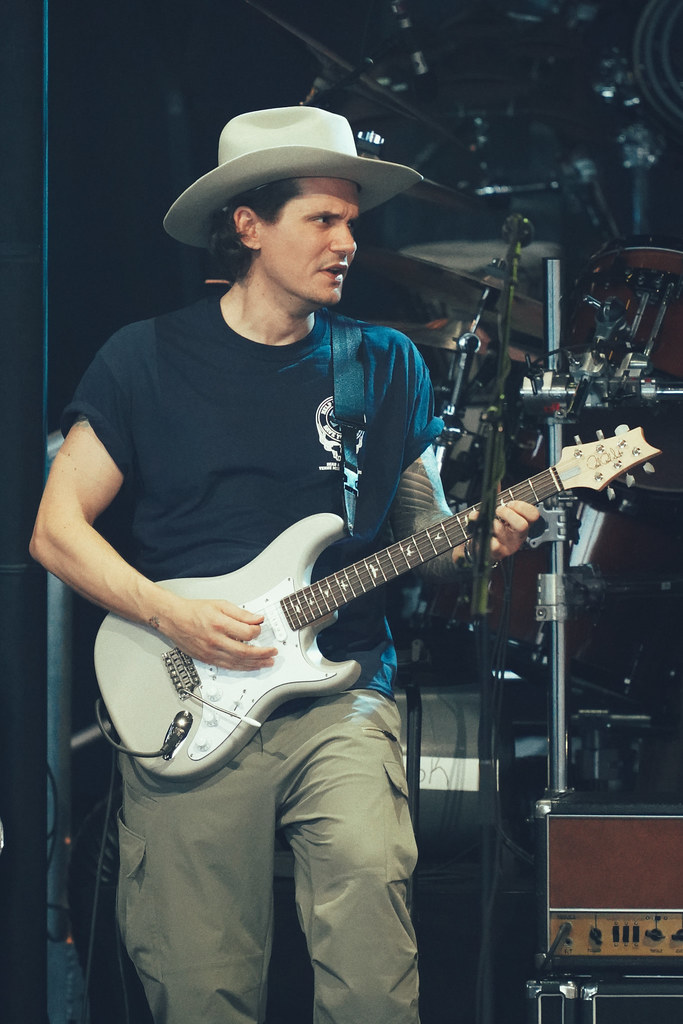 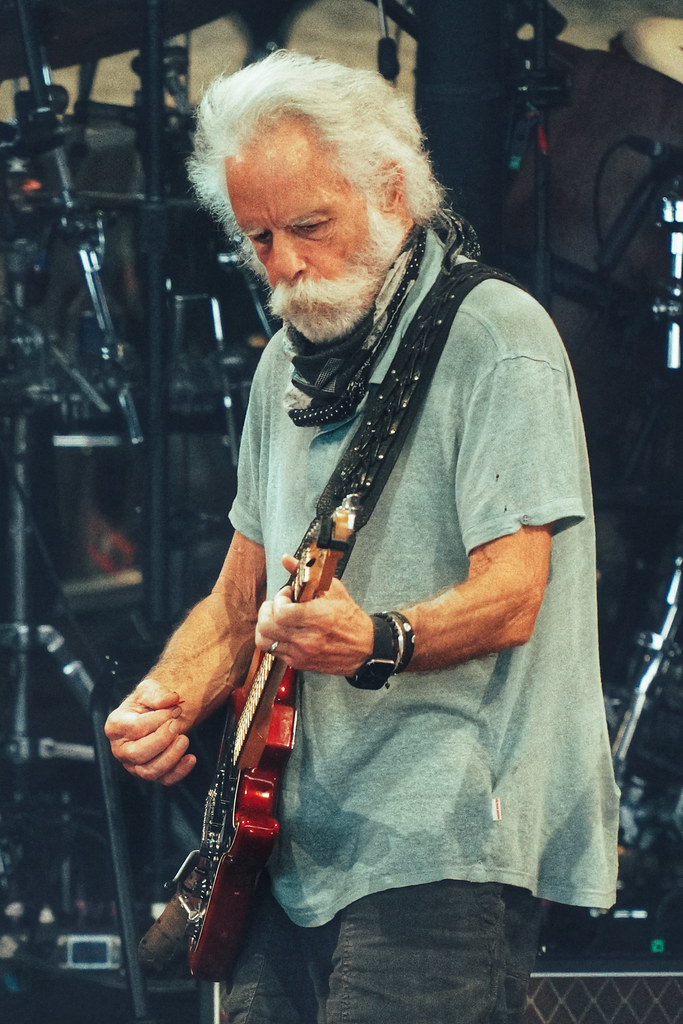 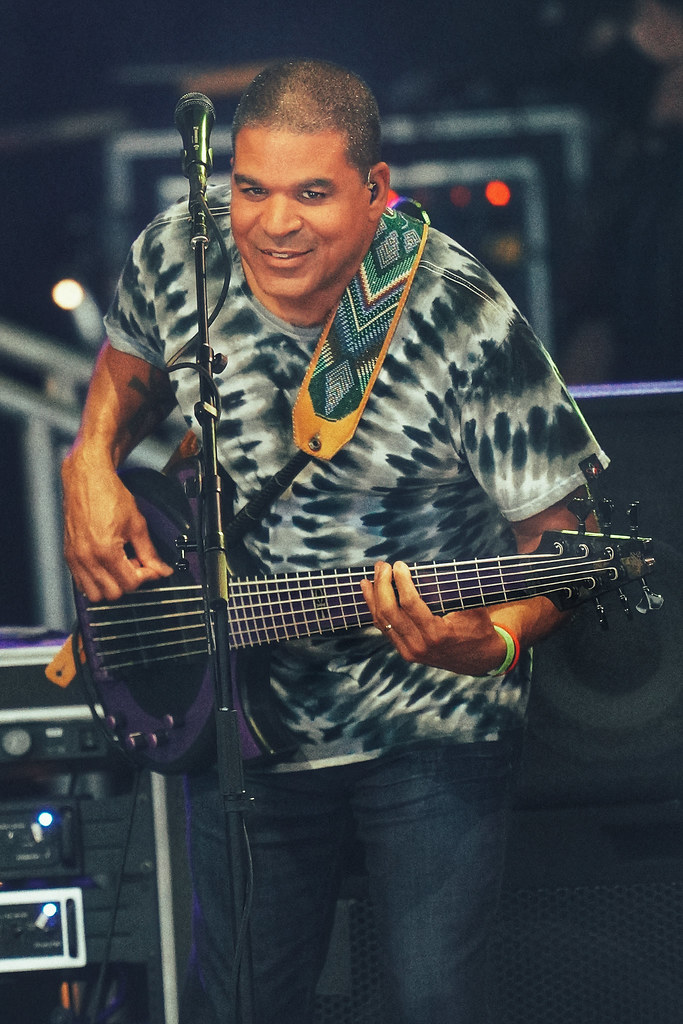 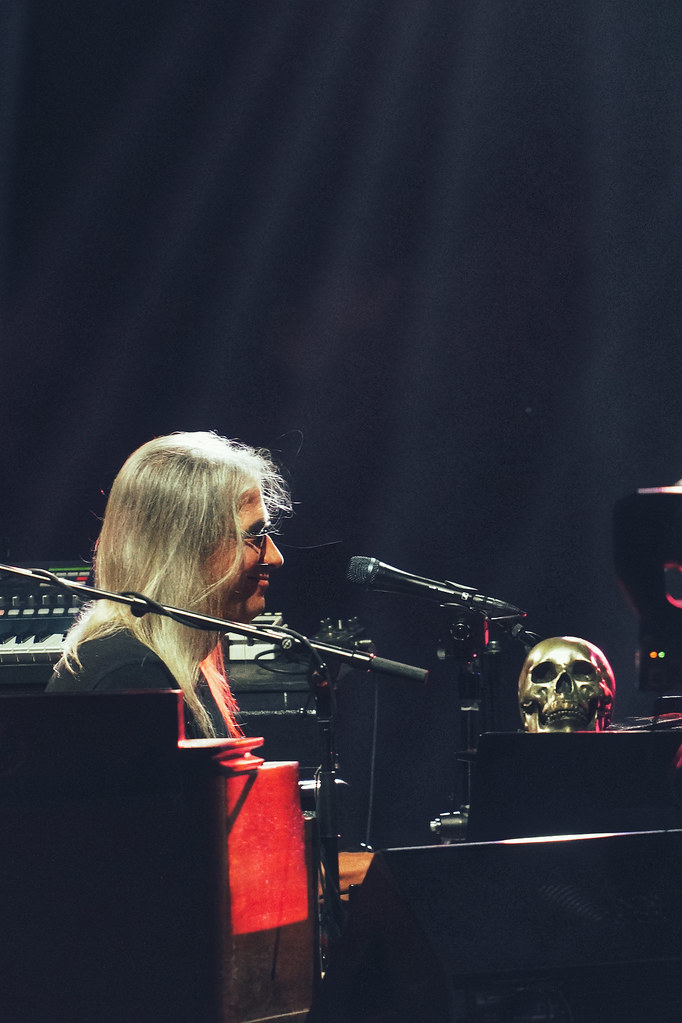 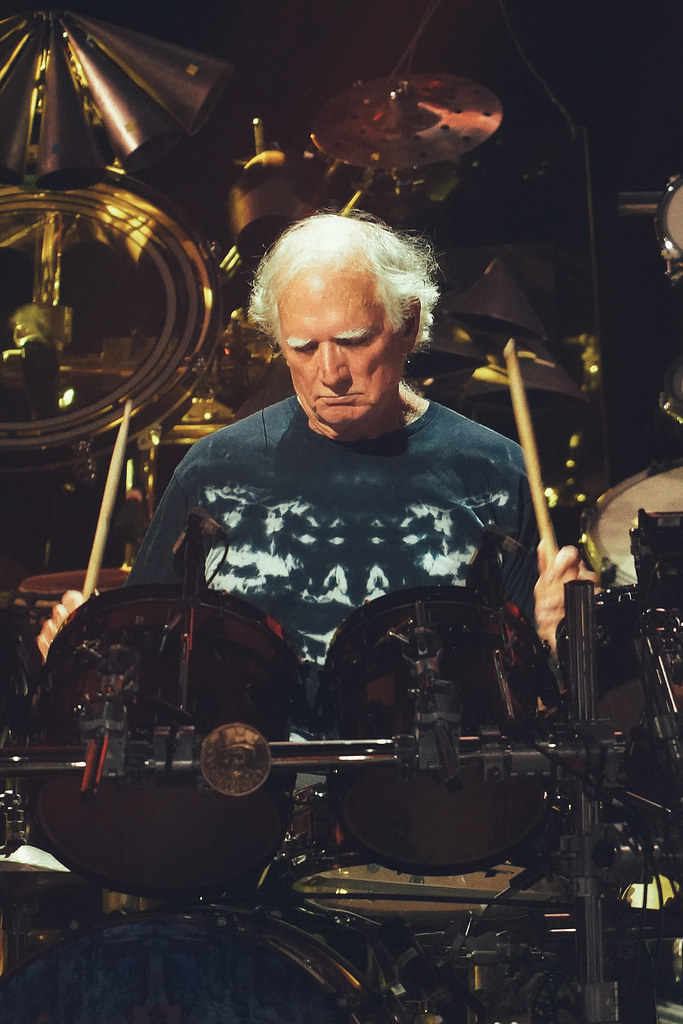 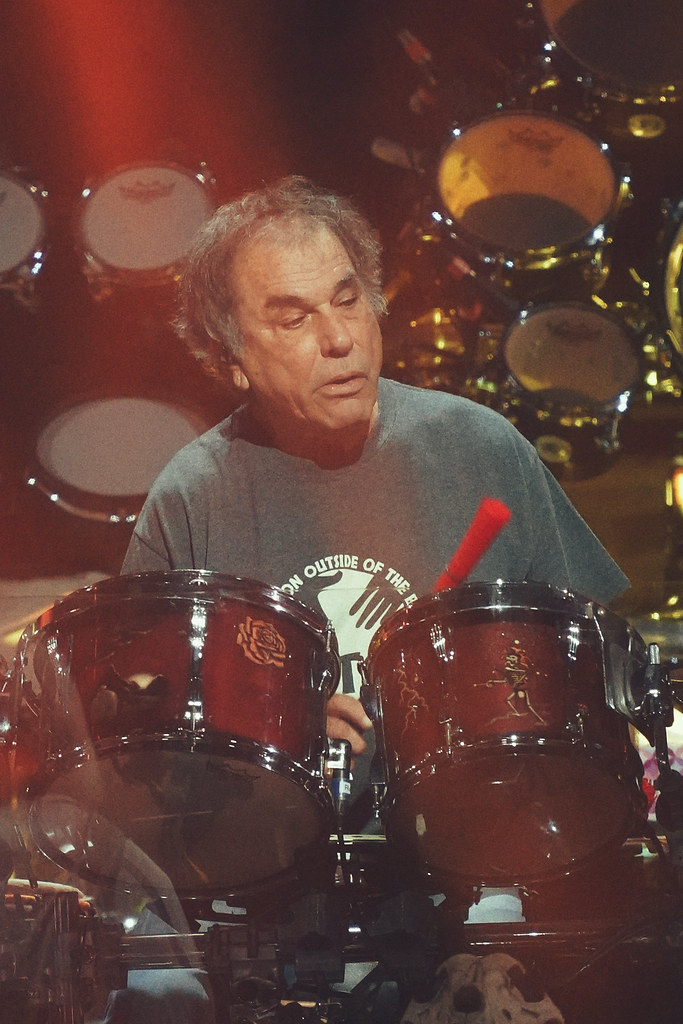 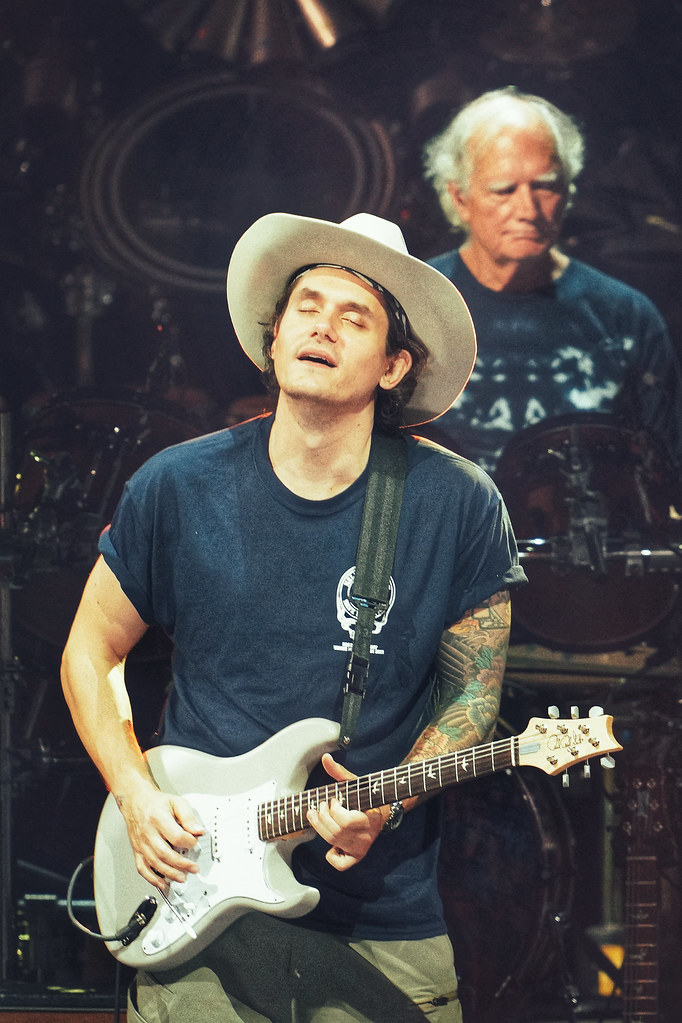 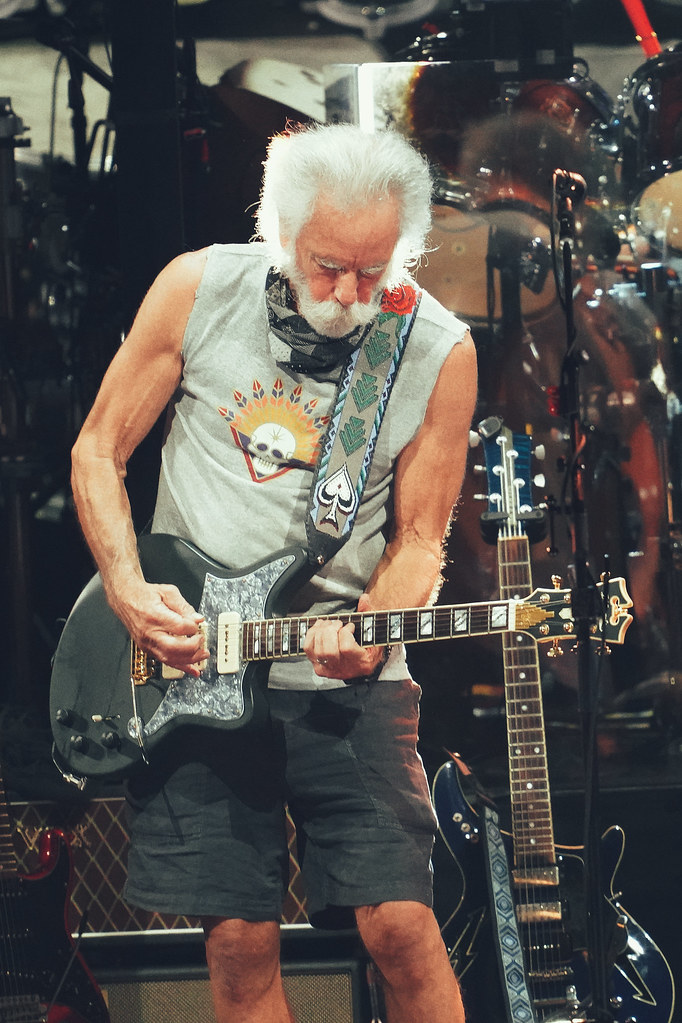 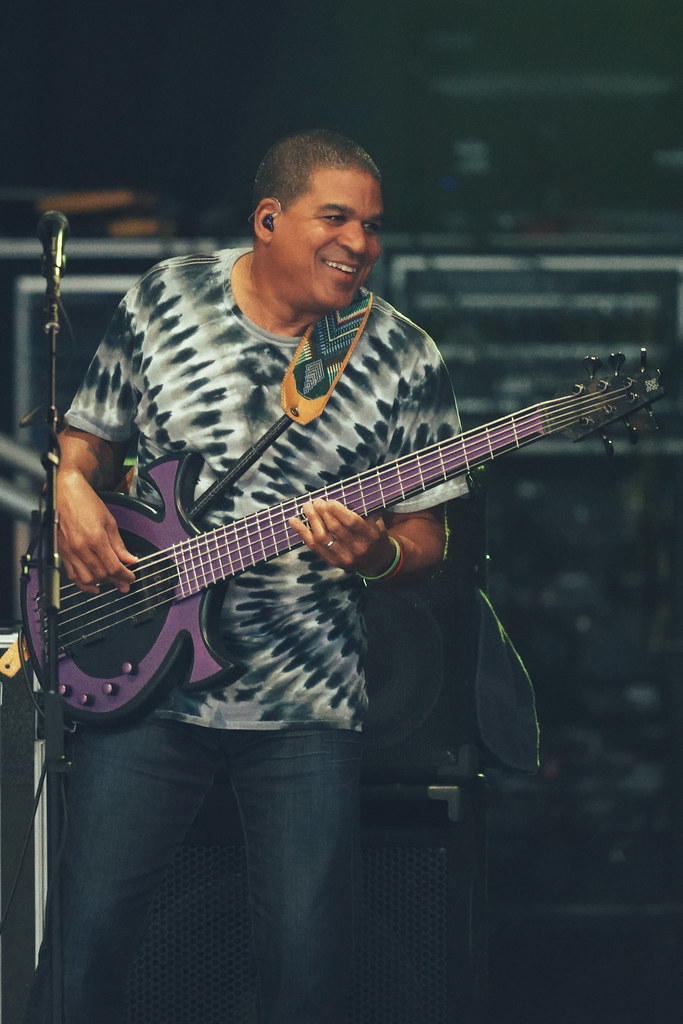 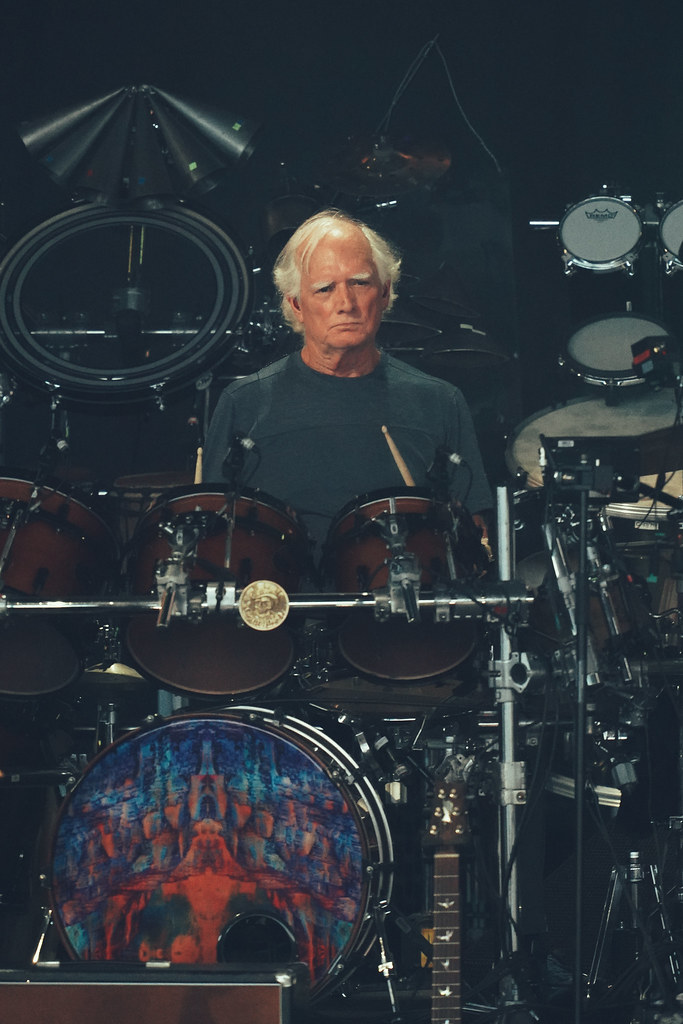 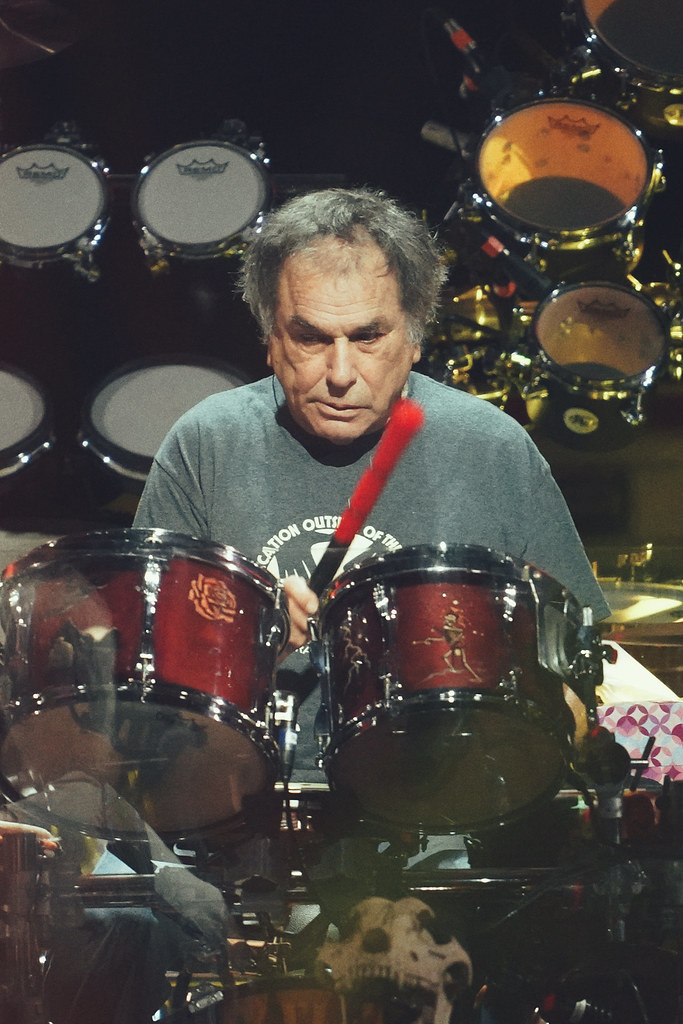 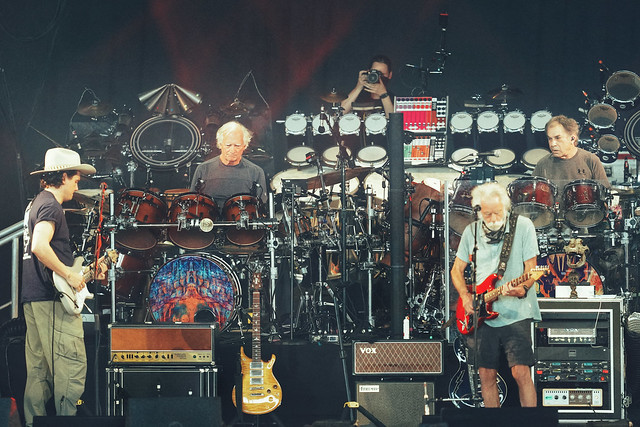 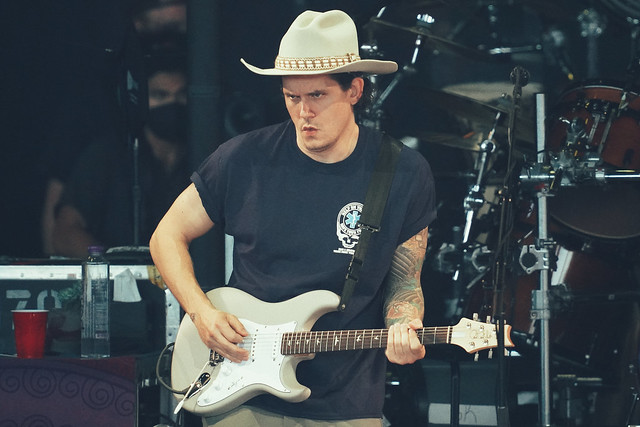 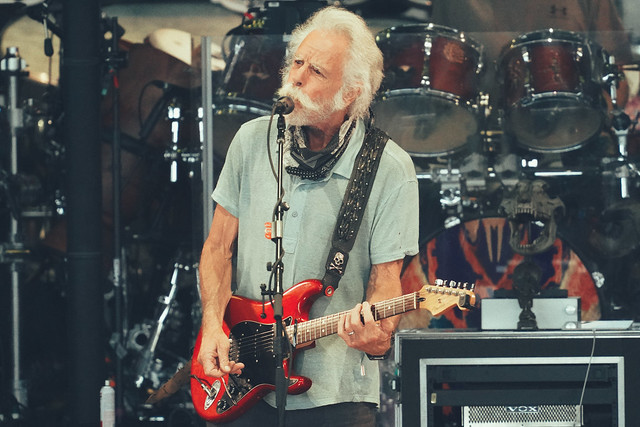 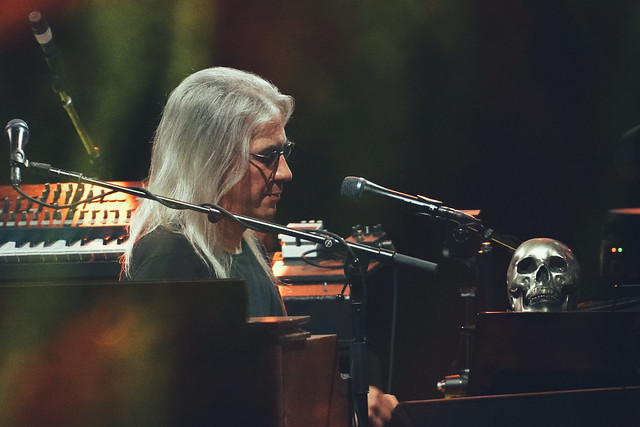 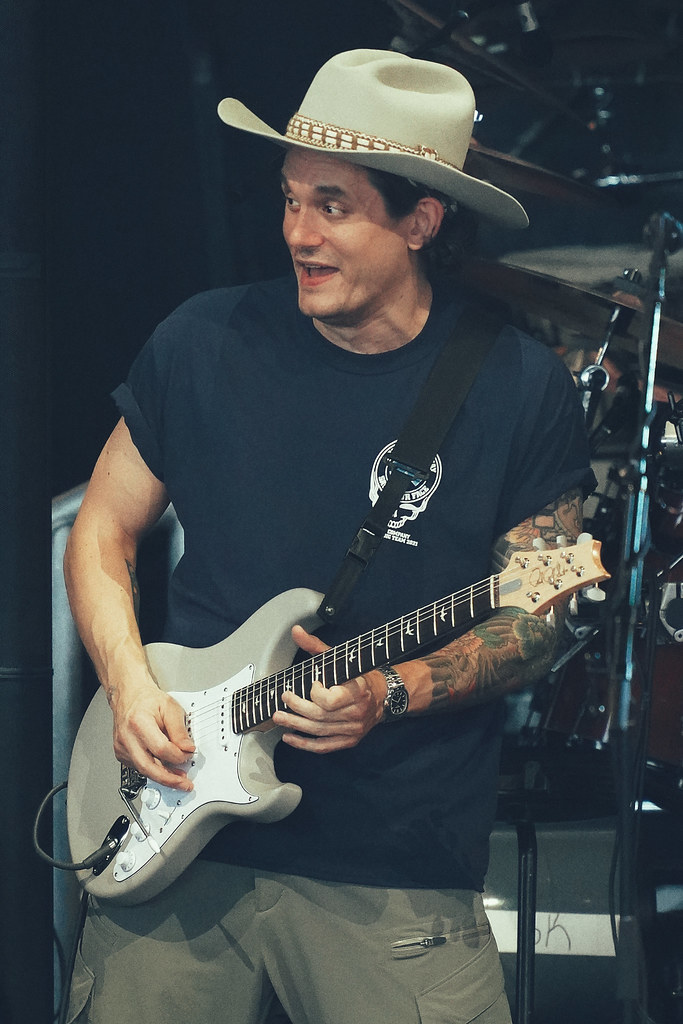 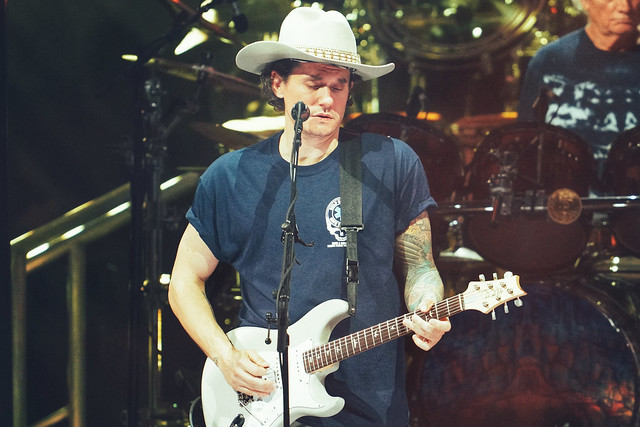 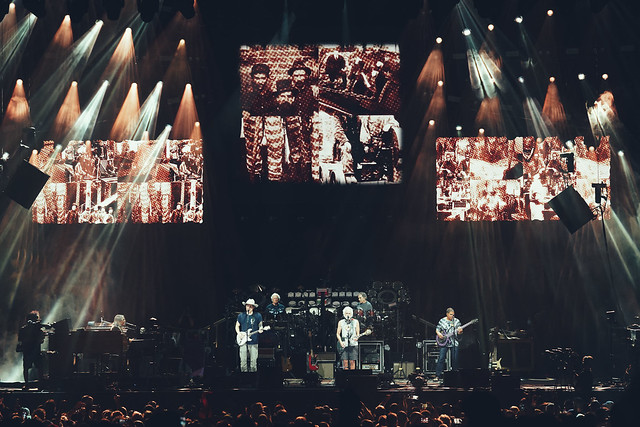