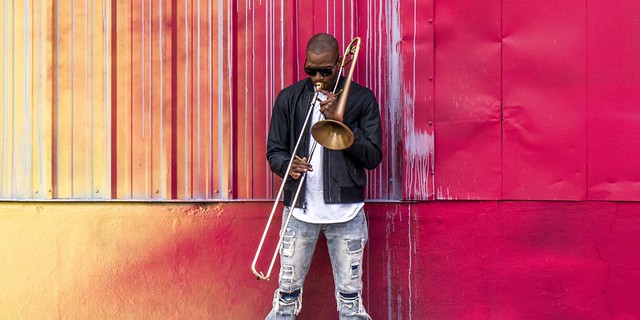 Experience an evening of good vibes with the funky jazz rhythms of Trombone Shorty & Orleans Avenue (“Hurricane Season,” “Tripped Out Slim”) and the high-energy, inspiring music of Michael Franti & Spearhead (“Say Hey (I Love You),” “The Sound of Sunshine”) at Wolf Trap on Tuesday, Aug. 24!

Part Jimi Hendrix, part James Brown and all New Orleans, Troy “Trombone Shorty” Andrews is the bandleader and frontman of Trombone Shorty & Orleans Avenue, a hard-edged funk band that employs brass-band beats, rock dynamics and improvisation in a jazz tradition. NPR hailed him as “New Orleans’ brightest new star in a generation,” and New York Magazine wrote that “Trombone Shorty takes in a century-plus worth of sounds—ragtime and jazz and gospel and soul and R&B and hip-hop—and attacks everything he plays with festive fervor.”

Trombone Shorty’s 2017 Blue Note debut Parking Lot Symphony is a 12-track tour de force produced by Chris Seefried (Fitz and the Tantrums, Andra Day) featuring 10 original songs along with covers of Allen Toussaint (“Here Come The Girls”) and The Meters (“It Ain’t No Use”). True to its title, the album contains multitudes of sound—from brass band blare and deep-groove funk to bluesy beauty and hip-hop/pop swagger.

Watch a trailer for Parking Lot Symphony by Trombone Shorty on YouTube:

Michael Franti is a globally recognized musician, humanitarian, activist and award-winning filmmaker revered for his high-energy live shows, inspiring music, devotion to health and wellness, worldwide philanthropic efforts and the power of optimism. Throughout his multi-decade career, Franti has earned three Billboard No. 1’s with triumphantly hopeful hits “Sound of Sunshine,” “Say Hey (I Love You)” and “I Got You,” as well as six Top 30 Hot AC singles, nine Top 25 AAA Singles and three Billboard Top 5 Rock Albums.

“I Got You,” lead single from his latest album Work Hard And Be Nice, marked Franti’s first No. 1 in nearly 10 years and landed on NPR’s “Most Popular Songs of 2020,” while the music video boasts over 1 million views since its release. Michael Franti & Spearhead recorded the 17-song album in studios in Nashville, Los Angeles, and San Francisco working with A-list writers and producers on what has been called their most diverse record yet.