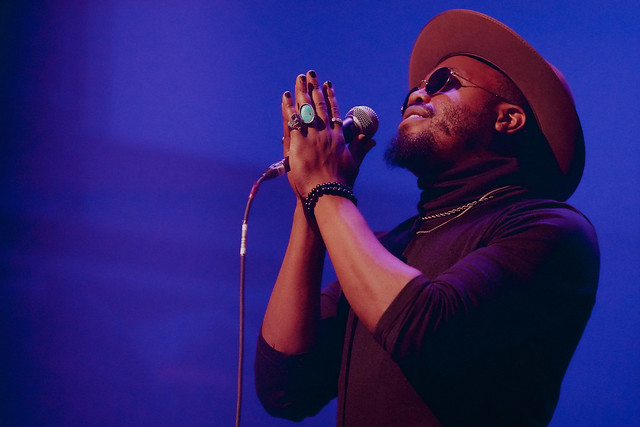 The line stretched around the corner and down the block from 9:30 Club the night of Sept. 11, and for good reason, as Durand Jones and the Indications came to town for one of the first major shows at the nationally recognized club since it recently began hosting shows in earnest and with safety protocols in place.

Shows had screeched to a halt last year in March, and the differences were quite obvious as you approached the door this past Saturday night — masks required, proof of vaccination necessary. But it would all be well worth it as Durand Jones and the Indications, a group formed in Bloomington, Indiana, in 2012, injected more than an ample dose of mind and spirit enrichment by way of the group’s enrapturing, everlasting sounds, rhythms, and vibes.

The capacity audience —one of the most dynamic the club has seen some time; it almost felt like the whole city was there — transported to another time and place via this group’s magical sounds of classical soul and R&B.

This band came to be in 2012 when Indiana University music students Aaron Frazer, the band’s drummer and ear-pleasing tenor voice, and Blake Rhein, the band’s guitarist, met up with Durand Jones, who was also in Bloomington and studying classical saxophone.

That relationship quickly blossomed and yielded a four-track recording that would serve as the basis for the first Durand Jones and the Indications album, which wasn’t released until 2016 after the group was essentially encouraged by an Ohio-based soul record label to capture the sounds they’d been creating in sessions and in one single show in 2014, squeezed in between the member’s other commitments.

Fortuitous in its genesis, the group demonstrated Saturday night exactly why it has quickly become a sensation, pumping wave after wave of soulful melodies through a crowd that couldn’t get enough of it, clearly deprived over the last year and a half of the precise enrichment this group has aimed to deliver with its three studio albums, the most recent being this year’s release, Private Space.

Listen to Durand Jones and the Indications’ newest album, Private Space, via Spotify:

Confident, vigorous and overflowing with zeal, front man Durand Jones wasted little time in grabbing control of the room with his charisma, his hot-strutting and his contagious smile.

Opening with “Don’t You Know” from the 2019 album, American Love Call, the group chose a song that highlighted its collective concerted effort on their second studio recording to become more of a vocal-heavy group. The resonance and alternating vocal arrangements of this track set the tone for a meaningful night, and also led seamlessly into “Circles,” the ensuing piece from second album and a track that showed off Durand’s ability to add an enticing, even sexy, texture to the group’s music.

Watch the official music video for Durand Jones and the Indications’ “Don’t You Know” on YouTube:

Breaking into some of the homerun tracks from the newest studio output, “Sea of Love” played out as a hyper groove thanks to remarkably rubbery bass lines from Ish Montgomery and unforgettably fetching piano from Steve Okinski — both wildly talented individuals who added so much Saturday to an already-world-class ensemble.

“Love Will Work It Out,” from Private Space, provided another opportunity for Durand to let his fantastic pipes ring clear and crisp, and it also allowed the group’s two backup singers — Kate Mattison and Lola Adanna from NYC-based band 79.5 that opened the night — to add an additional layer of tone, a layering of sound that the group has actively sought in the studio.

And speaking of tone — Aaron Frazer, who grew up in Baltimore, showed why he’s received praise far and wide for his unimaginatively gorgeous register. It’s that mesmerizing pitch that’s helped set Durand Jones and the Indications apart from anyone else attempting to create contemporary soul or R&B.

As the band moved deeper into some of the cuts from the 2021 album, it allowed Aaron — sitting back on his simple drum kit — to let loose. A voice that doesn’t even sound from this planet, he has a gift and shared that via songs like the title track from Private Space, where he exhibits his range.

“True Love” put the ball back in Durand’s court, and he let it fly from the heart and showing his dimension. He threw his head back, belted out “GIRL YOU KNOW I’M WAITING!” and it felt like the club walls were going to burst.

Later, Aaron took the mic back in the deep and heavy slow jam “How Can I Be Sure?,” where his voice turned nearly seductive as he guided the group on another journey through the challenges presented by human emotion and relationships.

And so much of the presentation benefitted from the careful dosing from the keyboard and synthesizer, creating an extraordinary aura to appropriately dress many of the impassioned lyrics of this group’s offerings—the kind of music some might have thought no one was making anymore.

Watch the official music video for Durand Jones and the Indications’ song “Witchoo” on YouTube:

Closing with the currently popular full-speed, dance-party hit “Witchoo” — fans were waiting for this one — Durand Jones and the Indications delivered to this anxious crowd looking for relief and a reason to let loose.

For their encore, the group chose a song that seemed to bring these two special voices, Durand and Aaron, together in harmony by way of the 2019 track “Too Many Tears.” And to close out the night: “Sexy Thang,” another adored selection from this year’s album, and a song that craftily blended instrumentation and vocalization, altered speeds throughout and had people grooving even on their way out the door.

Intro
Don’t You Know
Circles
Sea Of Love
Love Will Work It Out
Private Space
Morning In America
Sea Gets Hotter
Ride Or Die
More Than Ever
Cruising To The Park
Is It Any Wonder?
True Love
How Can I Be Sure?
Long Way Home
Can’t Keep My Cool
The Way That I Do
Witchoo

Encore
Too Many Tears
Sexy Thang

Here is Durand Jones and the Indications performing at 9:30 Club on Sept. 11, 2021. All images courtesy of and copyright Casey Vock. 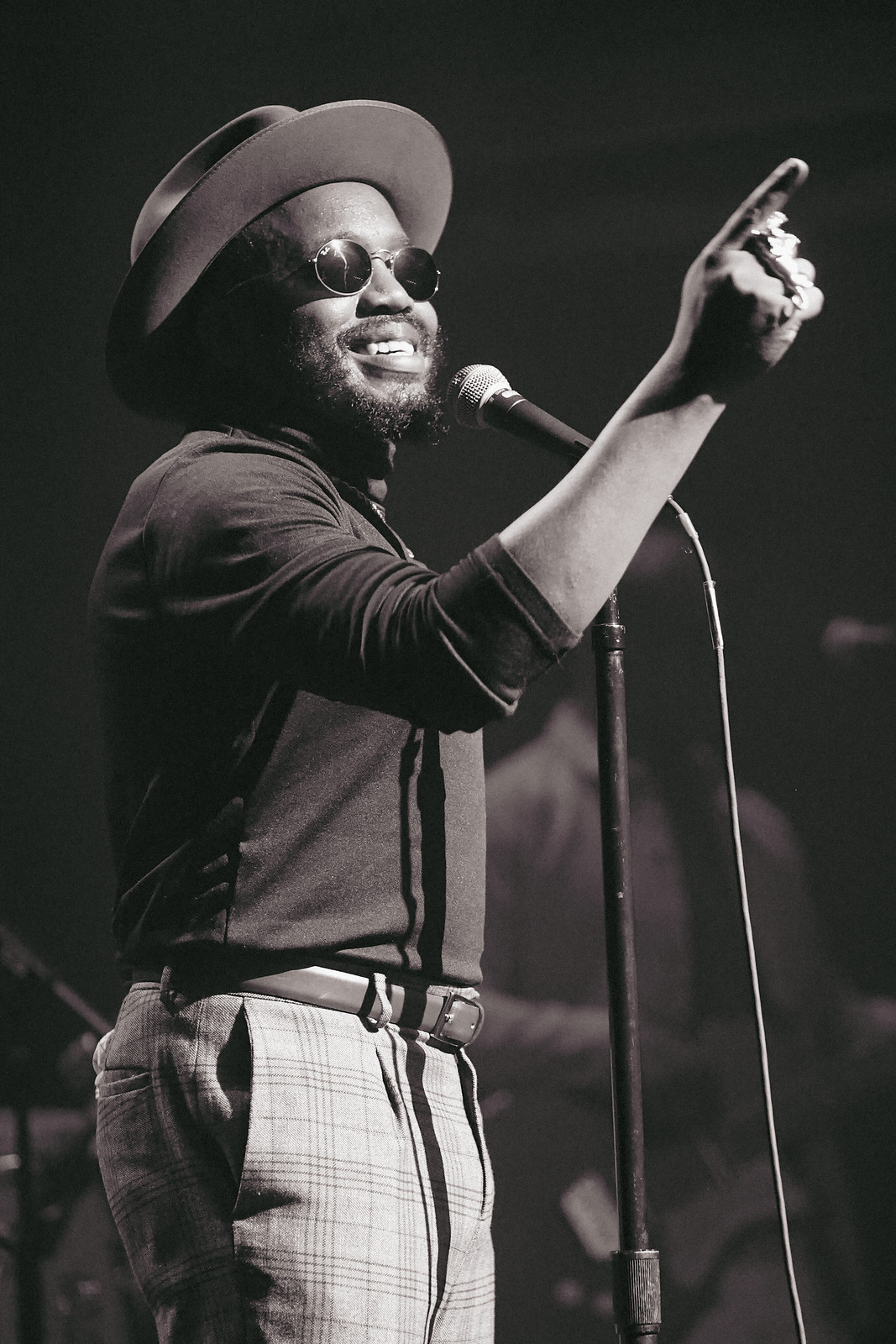 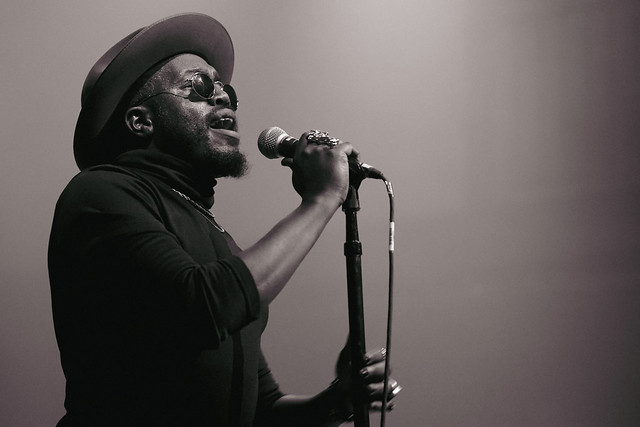 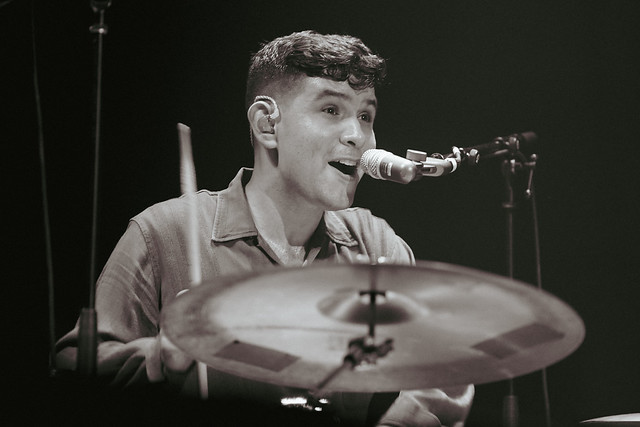 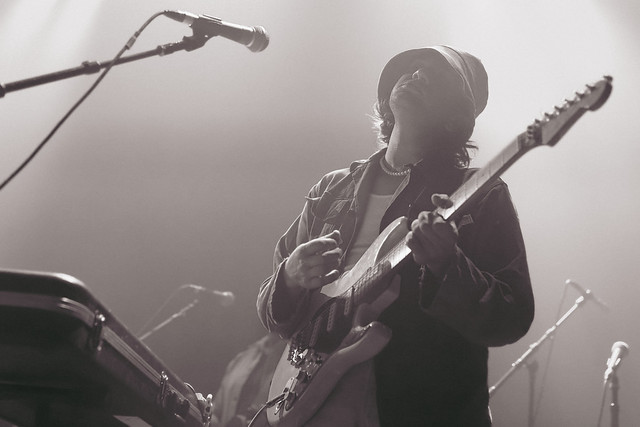 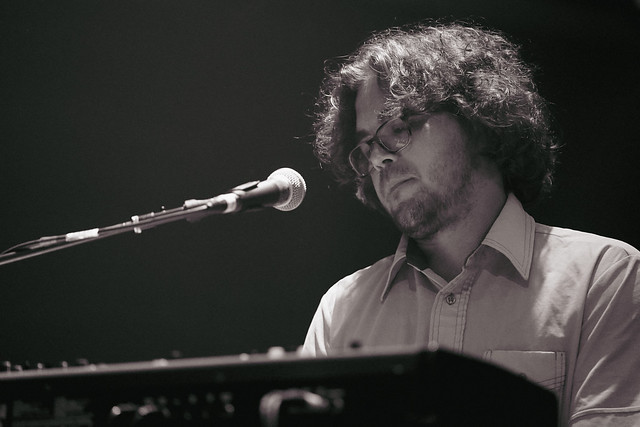 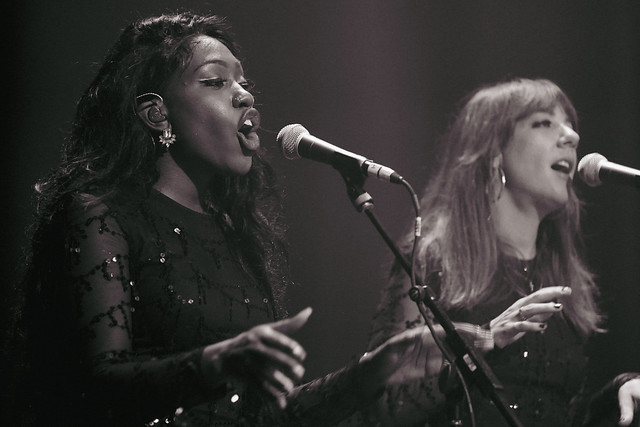 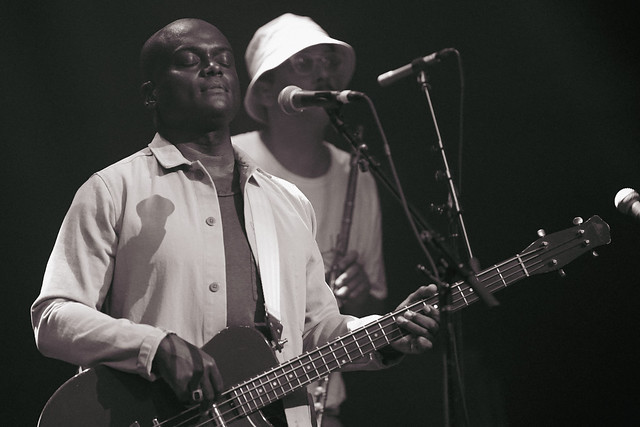 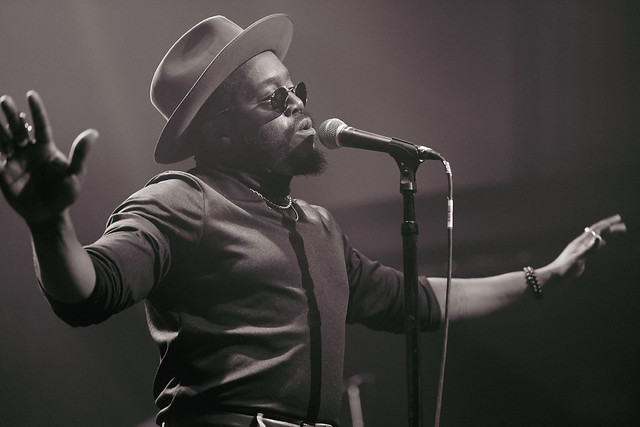 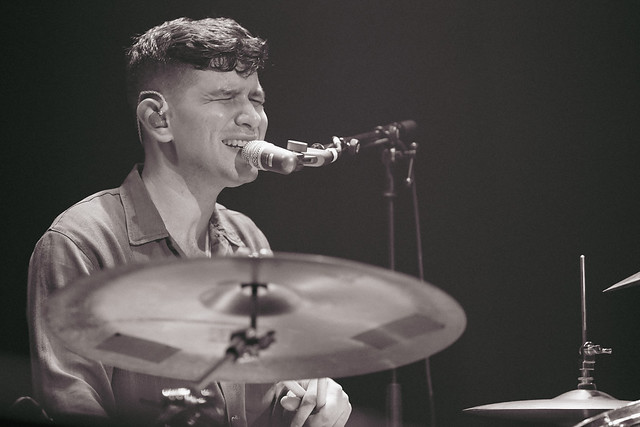 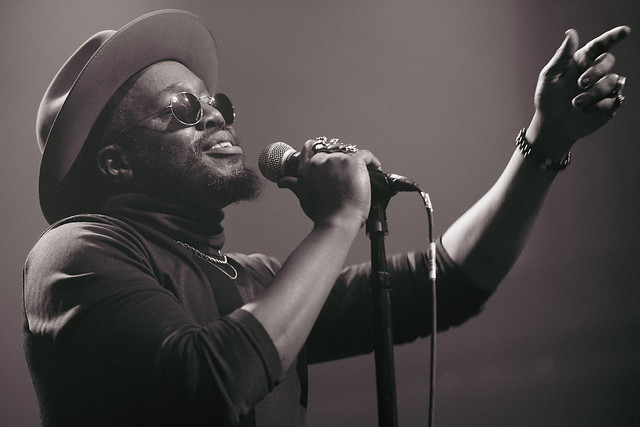 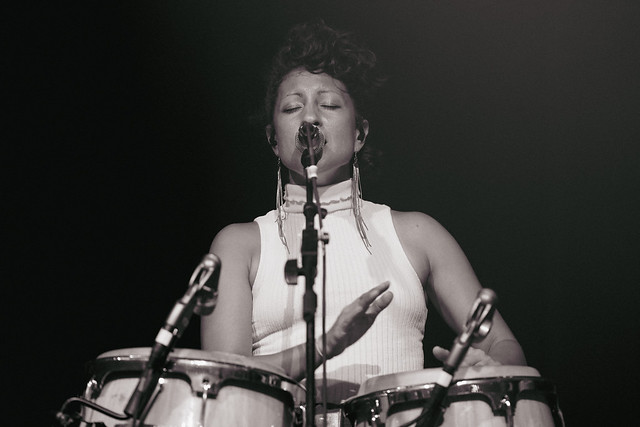 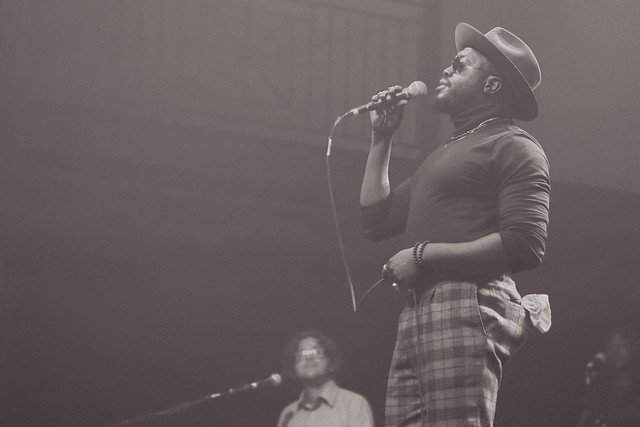 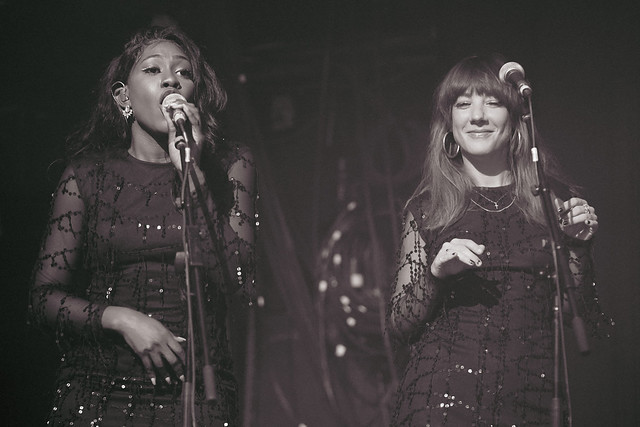 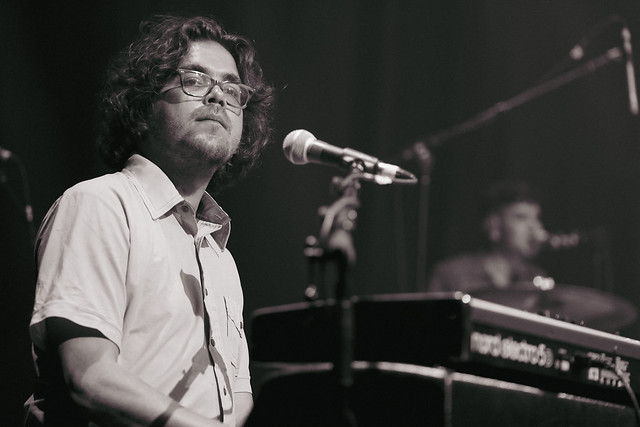 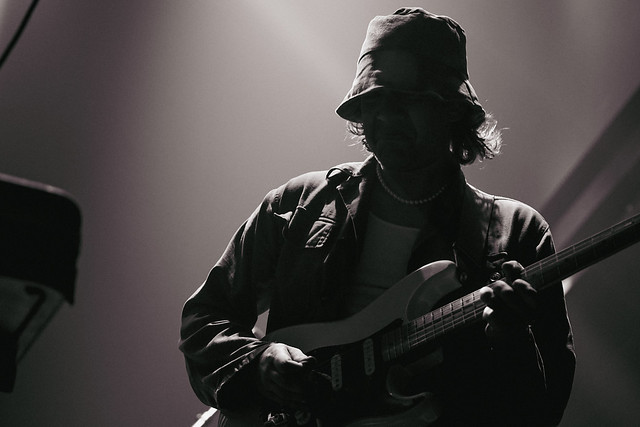 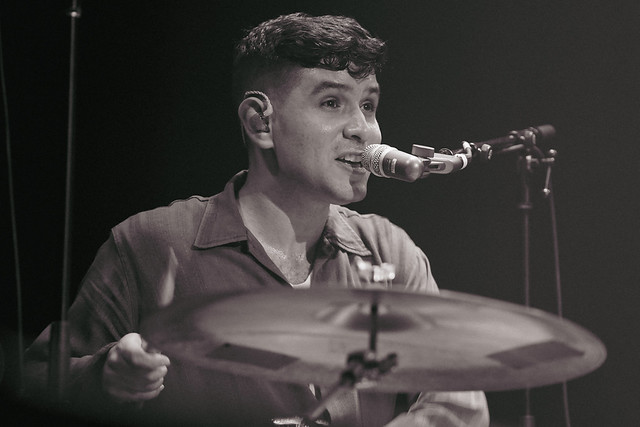 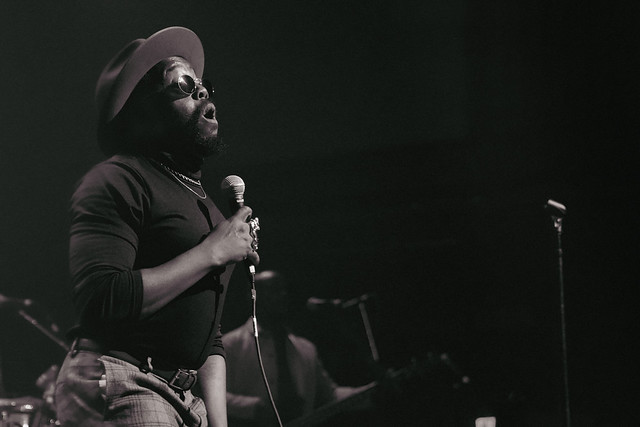 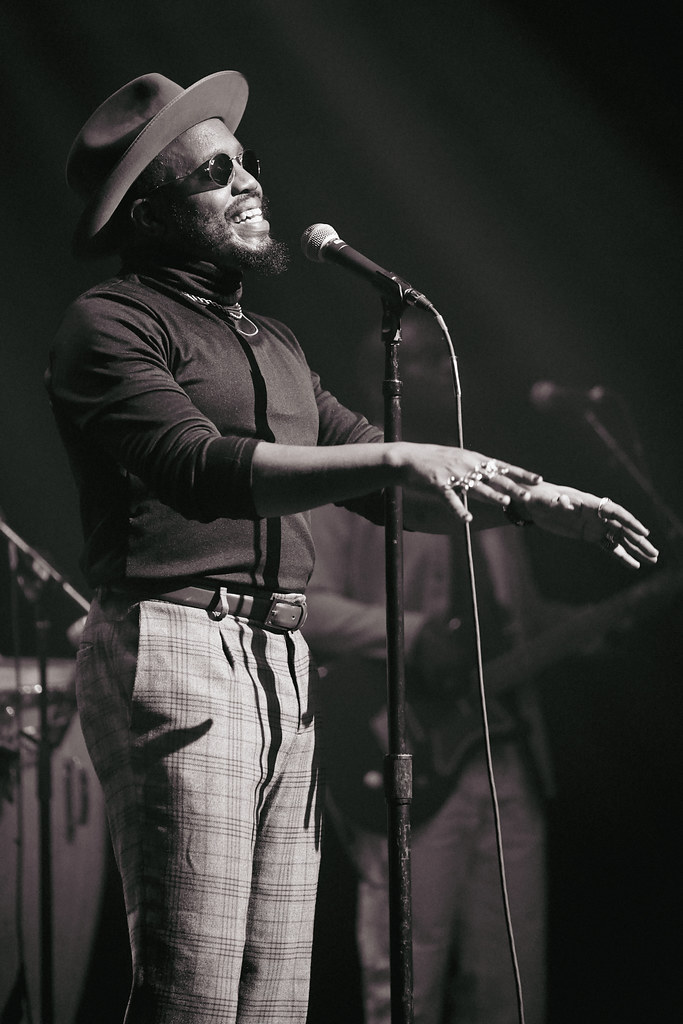