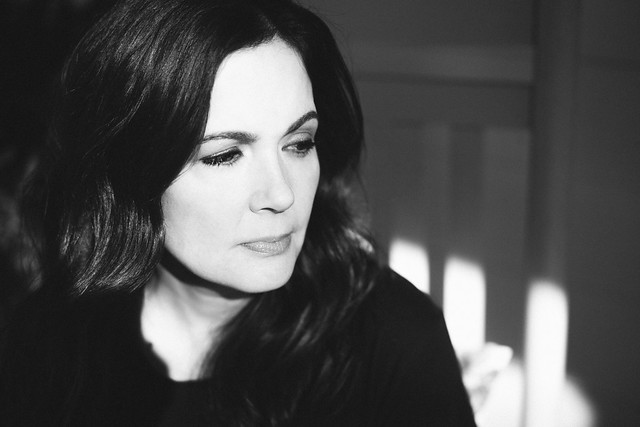 Lori McKenna is one of country music’s hit making songwriters, with songs covered by artists like Tim McGraw and Little Big Town. But she’s also an accomplished performer and recording artist in her own right, as she demonstrated recently at The Birchmere.

Mark Erelli opened the show at The Birchmere on Oct. 7, later joining McKenna’s band as guitarist. Erelli has been releasing records of his own for about two decades. As he told the audience, he considers Lori his “folk big sister,” and he credits her with keeping him in the music business. The two met in 1996, when they both competed in a songwriting contest. His real sister, he added, was in attendance.

Last year, Mark released his latest album, Blindsided. While the title cut is actually a romantic ballad, he pointed out that it would turn out to be a little too on the nose. He told the audience that there’s an implicit contract in songs; “they need,” he said, “a witness.” He played several songs from that new album, including the title, “The River Always Wins,” “Can’t Stand Myself,” “Lost in Translation,” and “Her Town Now.” “You’re Going to Want to Remember This” was co-written with Lori over the pandemic. He rounded out the set with an older song, “By Degrees.” Mark is a fine guitarist, singer, and songwriter, and he’ll be back in the area in on Nov. 7, when he performs at City Winery.

For all her success in penning hit songs, Lori McKenna was and is an incredibly grounded individual. A Massachusetts native, she’s never relocated to Nashville, as so many folks in the business do. She continues to live in Stoughton, where she and her husband have raised five kids, the oldest of whom is now 17. After she sang her tale of domestic turbulence, “The Bird and The Rifle,” (the title track of her 2016 album) a fan called out, “How’s Gene?” Not missing a beat, she replied, “Gene’s great, thanks. I’ll tell him you asked.”

Lori’s groundedness is evident in many of her hit songs, like “Humble and Kind,” which was taken to the top of the charts by Tim McGraw. In addition to composing on her own, Lori also writes with Hilary Lindsey and Liz Rose as the Love Junkies. (Liz’s daughter, Caitlin, is an accomplished American artist.) Little Big Town scored a hit with their “Girl Crush.” They also recorded “Sober” and “Happy People,” which she co-wrote with young songwriter Hailey Whitters, and which was Whitters’s first time having a song on country radio. That song appears on her excellent 2018 release, The Tree. Along with Natalie Hemby and Brandi Carlile, she wrote “Crowded Table,” which was performed by the all-female country supergroup The Highwomen.

Stream The Tree by Lori McKenna on Spotify:

While McKenna’s songs have seen much success on the country charts, her own style is more of a folk or Americana sound. She’s admitted to being self-conscious about her own voice, but has also acknowledged that it works well for the often sad songs that she writes. Last year, she, too released a new album, The Balladeer, and she opened with the title cut. The song “Uphill,” she said, “is for people whose friends are a little like mine. They need a little help, but don’t want to ask.” The album also includes a few co-writes with Rose and Lindsey, like “Two Birds,” from which she took the title of her current tour.

Family is a frequent source of inspiration and a topic of McKenna’s songs. Whenever her sister, Marie, attends one of her shows, Lori’s goal is to make her cry. She wrote a song named for her, and her sister was generous enough to giver her permission to sing and record it (also on The Balladeer). “She’s been a trooper,” Lori said. After “People Get Old,” (from 2018’s The Tree) she told the audience, “I don’t want anybody to take these personally. I wrote that song about my dad, and he was a pretty good sport about it.”

Many of Lori’s songs, like “The Old Woman,” deal with aging. She explained that she’d spent a lot of time writing during the pandemic, and that this song was inspired by looking at a 10-year-old picture of herself. “I hated myself in that picture,” she said. “But,” she added, “I looked pretty good in that photo, and I hate myself now.” I think we can all relate to hating how we look in photos! Lori also clarified that, while the song references wearing jeans, she did not, at any point during the last year and a half, wear them, preferring more comfortable attire. For her encore, she played another song about both aging and family, “When You’re My Age,” which she recorded for The Balladeer.

Lori’s set was rounded out by a number of songs from older albums. “Witness To Your Life,” which closed her main set, appeared on her major label debut, 2007’s Unglamorous. “The Lot Behind St. Mary’s” was another track from The Tree.

The variety of songs that Lori shared with the audience on Thursday only scratched the surface of her songbook. Steeped in the storytelling of the folk tradition, these songs are powerful, earthy tales that connect with just anyone’s experience. They’re deeply moving, and Lori knows exactly how to deliver them. For all the success she’s had a songwriter covered by big country stars, I enjoy even more her own work, which has a sincerity (I hate to say authenticity) and emotional depth that a writer brings to their own words. Though she but small — the members of her backing band all towered over her relatively diminutive frame — make no mistake: Lori McKenna is, indeed, mighty.