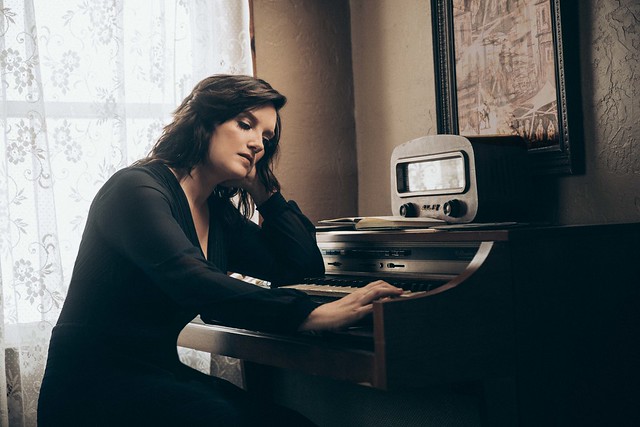 As a songwriter and a performer, Brandy Clark straddles the division between contemporary country and Americana music. Touring behind last year’s Your Life Is a Record, she appeared recently at The Birchmere with her band, where she treated the audience to some of the finest songs being made today.

A native of Morton, Washington, success has not come easily or quickly to Brandy Clark. Her story is one of hard work and persistence, with overwhelming talent eventually winning. Though she began playing guitar at the age of 9 and was writing songs from an early age, music wasn’t initially a focus for her. Rather, she concentrated on athletics, earning a basketball scholarship to Central Washington University. Becoming disenchanted with sports, she returned home, where she attended community college and began playing in local bands.

In 1998, Brandy moved to Nashville. She attended Belmont University’s music business program, and she worked on sharpening her songwriting. She told the audience that for many years she chased the “mirage” of success: she’d been in Music City for 11 years before her songs started getting placed on records in 2009. In 2010, Reba McEntire recorded her “Cry” and “The Day She Got Divorced.” The following year, several more artists covered her songs, including Ashton Shepherd (“Trying to Go to Church”), LeAnn Rimes (“Crazy Women”), and Miranda Lambert (“Mama’s Broken Heart,” which reached No. 2 on the charts). Introducing that last one in her encore, she said, “Miranda Lambert recorded this song, and the mirage became very real.”

Around the time she emerged as a songwriter of note, Clark also started making waves as a performer. In 2012, she opened for Sheryl Crow (a gig that highlighted her significant crossover appeal), debuted at the Ryman, and released an EP. Her solo debut, 12 Stories, came in 2013, and was critically lauded, as were her subsequent records. The album reached number 23 on the charts, and more importantly, it earned her a major label contract with Warner Brothers Records. Her sophomore album, Big Day In A Small Town, appeared in 2016. In the meantime, she’d become a go-to songwriter in Nashville, penning hits like “Follow Your Arrow” for Kacey Musgraves.

While Brandy’s work has its roots in classic country, she brings a thoroughly modern slant to it. “Follow Your Arrow,” for example, is notable for its plain statement of acceptance for attraction to members of the same sex (“Or kiss lots of girls / If that’s what you’re into.”) While Clark is an out lesbian, it’s hardly a preoccupation in her songwriting, which is just as notable for its understated feminism (“Crazy Women”) and discussion of marijuana use (“Get High”). She’s frank about sex in songs like “Girl Next Door,” where she takes aim at notions of purity, singing about the “Virgin Mary metaphor.”

Watch the official music video for “Girl Next Door” by Brandy Clark on YouTube:

“Bigger Boat,” which appears on her latest album, features a duet with Randy Newman, pointing to how she’s drawing from a myriad of reference points that extends well beyond the confines of her chosen genre. Introducing that song, she told the audience, “I think this city, more than any other city in American, can understand this.”

Songs about revenge, and, more specifically, women getting revenge, are major part of her wheelhouse, though she says she is not actually “an angry person.” She described “Daughter,” which appeared on Big Day In A Small Town, as being about “a kinder, sweeter, longer-lasting kind of revenge.” She told the audience that it’s one of her favorite songs to perform, and she dedicated it to “anyone who has a daughter.”

Par for the course for country music, Brandy’s set included its fair share of brokenhearted ballads like “Love Can Go To Hell” and “Can We Be Strangers.” During the solo portion of the set, she played “I’ll Be The Sad Song,” which was written in Santa Fe, New Mexico. “I don’t know that I’ve ever played this live,” she said.

The set began with several songs from her latest album: “Who You Thought I Was,” “Long Walk,” “Love Is A Fire,” and “Pawn,” before taking “a trip back in time to my previous record” for “Daughter.” She stayed with that previous record for “You Can Come Over” and “Love Can Go To Hell.”

Her band then left the stage, and she mentioned that she gets a lot of requests for songs online. She joked, “Your request will get fulfilled, but it might not be that night.” Later, she started her encore with “Bad Car,” prefacing it by saying, “I’m going to play that song they asked for in Minneapolis the other night.” She played the title cut from Big Day In A Small Town solo acoustic. After “I’ll Be The Sad Song,” while the rest of the band was returning to the stage, she mentioned that, during the shutdown, her bedtime became significantly earlier, which made touring the West Coast difficult. Being on Central Time, those shows were, effectively, at 10 o’clock at night for her, an experience which she compared to being in Europe.

With the band back on the stage, she introduced “Same Devil,” which was one of a few songs she recorded over zoom with Brandi Carlile. “Remember Me Beautiful” which she hasn’t recorded yet, was written to memorialize people we lost to Covid. Brandy rounded out the set with “Stripes,” “Hold My Hand,” and “Pray to Jesus,” which had the audience clapping along. She performed her encore solo, ending the night with a new song. She told the audience, “to me, it’s very hopeful. I feel like we could all use some hope.”

Brandy’s set was a real treat: This was some of the best music being made today, performed with real skill and emotion, and it was a highly memorable performance. I count myself lucky to have been able to see her play. Even if you’re someone who doesn’t normally listen to country music, Brandy is still someone you should pay attention to. Quite simply, she’s doing this at a higher level than almost anyone else today, and her musical palette is both broad and deep. Anyone who appreciates good writing will find that there’s a lot to love about Brandy Clark’s music.