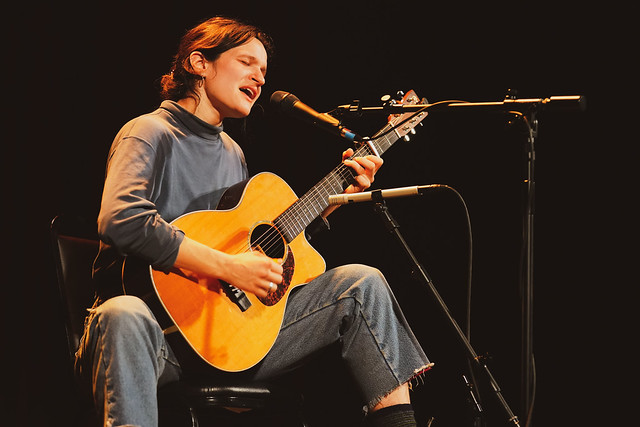 Adrianne Lenker must have been sent to this planet to share her music, a gift from the universe or whatever Creator might be conducting this whole thing.

The hallowed singer-songwriter has emerged as one of the most profound, indelible voices of our time, a pioneer at the front of the Brooklyn-based indie rock outfit Big Thief.

But long before Big Thief put out its first album in 2016, Adrianne was making music. In fact, she was writing songs as a little kid. As she’s discussed in past interviews, Adrianne was born in Indianapolis when her parent were members of a religious sect, and after they abandoned it, Lenker would live out a van and in 14 different rented homes before ending up in downtown Minneapolis about the time her parents separated.

There, Adrianne grew up even faster. Her father had her on a path to what he hoped would make her a child pop star, teaching her everything he knew about guitar and songwriting, taking her to bars to play gigs, and essentially managing her the through the recording of two albums, neither of which she considers part of her professional catalogue — but still formative experiences, nonetheless.

She struggled in school and wanted to get away, to be her own musician, and after earning her GED, that’s what she did. Ultimately earning a scholarship provided by Susan Tedeschi to attend the Berklee School of Music, she got the space she needed, asserted control over her own life, worrying less about her career and more about making songs and forging relationships with other creative people. So, by the time she met the musicians with whom she’d form Big Thief, Adrianne had already overcome daunting, calamitous scenarios to find herself.

Maybe that’s why at only 30 years old, her aura is that of the wisest, most seasoned songwriting veterans. She is humble, speaks delicately and her presence alone is somehow moving. And, if her much anticipated solo appearance at DC’s Lincoln Theater on Nov. 13 is any indication, she’s just now coming into her own as a songwriter and performer.

A coffee mug in hand, with a bit of reticence and curiosity, Adrianne walked onto the stage, seated herself in the single chair at the center of it and, after a careful tune of her acoustic guitar, she began what turned into a heartrending, enduring set of songs pulled from her own catalogue and some she’s written with Big Thief, including a handful of still-unreleased tracks.

What might be underappreciated about Adrianne, who has endless mystique even within a modest appeal, is her finesse and wherewithal as a guitarist. Utilizing a clutched plucking style almost like banjoist, her hands deftly calculated a trademark sylvan surface, and with her words almost pitiful in their virtue, Lenker opened with a haunting, stark take on “not a lot, just forever.”

Released on her fall 2020 and most recent album, Songs, this track established the night’s mood at Lincoln Theater—reflective, meditative, earnest, avowing. While Adrianne’s voice was timid, at times muttering, her lyrics carried immense weight within songs culled from her own experiences and emotions, and the audience at Lincoln Theater was essentially granted a window to her mind:

With the news surfacing just days after her DC appearance that Big Thief would be releasing a new album in 2022, the crowd — possibly unaware at the time — was treated to what was likely the first ever performance of “The Only Place,” a track released in the past week and set to appear on the forthcoming record, which will feature 20 songs and be titled Dragon New Warm Mountain.

As Big Thief has become a household name for folk and indie rock fans, some of Adrianne’s tunes on the album Songs have totaled millions of streams on Spotify. One of those, a track called “ingydar,” translated to a pensive, bittersweet sound with a wonderfully light and circular groove. That round design is surely no coincidence—Adrianne’s non-linear view on life and relationships is a theme for her on and off stage.

Played as the third song of the night, enthusiastic audience members were by this time moving in their seats, some already singing along out of habit. Coloring it with imagery from her childhood, like the death of her great aunt’s horse (the song’s eponym), Lenker shows her propensity for inventive, stimulating songwriting:

You are as far from me as memory
With fixtures fracture varyingly
The juice of dark cherries cover my skin
Six years in, no baby

Everything eats and is eaten.”

Though she’s a human more seasoned than her years might suggest, Adrianne has not bid farewell to her youthful spirit — she transmits a purity that makes her recordings and performances that much more remarkable. Possibly muffled and definitely controlled by the adults who were pulling her strings when she was a teenager, Lenker retains a provocative, inspirative well that nourishes her songwriting.

In between songs Saturday night, she caught a bit of feedback from a floor speaker, and her eyes widened in surprise and entertainment.

“I feel like there there’s something that wants to come back in my wedge,” she said, blowing and humming into the mic, cracking up at herself. “I could be imagining it. OK, I’m going to stop now.”

Adrianne used an eerie, rich opening on the guitar to deliver a distressing version of the 2020 release “half return,” and then she slowed her pace down to a crawl, performing “Terminal Paradise,” an austere, meandering dark folk number from her 2018 album, abysskiss.

Pulling another Big Thief track, Adrianne offered an eye-watering, nuanced “Wolf” from the band’s 2019 record Big Hands. The resonation off her Martin celestial and gracious, it gradually culminated with her otherworldly howl that faded off as her fingers stayed swift on the strings— a sophisticated presentation on par with some of the most famed musicians to ever take the Lincoln Theater stage.

“You rock!” an audience member screamed.

“You river,” she grinned back, taking a sip from her green mug.

Following a couple more from her own latest album, Lenker gifted the room with an entire series of additional still-unreleased Big Thief songs, including “Dried Roses,” “Time Escaping” (released in the last week), “Spud Infinity” and “Blue Lightning.”

And after concocting an angelic version of “zombie girl,” she injected pop and fervor into the title track of the upcoming Big Thief album, “Dragon New Warm Mountain I Believe In You.” While most of these songs were performed by the full group on the fall tour, Adrianne’s unadorned, organic telling of these tales made the night that much more special and boded well for what will be a busy spring for her and her bandmates, including Buck Meek, who recently performed locally at Jammin’ Java.

After closing her lengthy set with two more Big Thief tracks, including an energized, strident “Cattails,” Adrianna appeared to be riding powerful emotions, clearly moved from the embrace she’d received.

As she stood to thank the crowd, a fan ran down an aisle and tossed a bouquet of roses onto the stage. Adrianne’s mouth dropped—she picked up the flowers and held them close, the beginnings of what looked like tears in the corners of her eyes.

When she returned to the stage for her encore, she was still clutching the rose bundle tight to her body.

With her eternally lilting expression and some of the loveliest tones you could hear today, she performed an unforgettable, desirous version of “anything,” with the entire audience chiming in to sing along with her, word for word:

“Grocery store list, now you get this
Brunch, had calls and messages
I don’t wanna be the owner of your fantasy
I just wanna be a part of your family

Offering therapy, reprieve and even hope, Adrianne is courageously and selflessly imparting her words and accents to the world at a time when it could use them most.

Here are images of Adrianne Lenker, as well as the night’s opening act Lutalo Jones, performing at Lincoln Theater in Washington DC on Nov. 13, 2021. 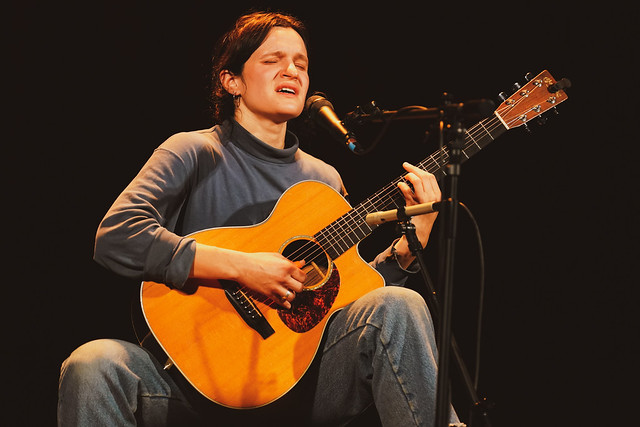 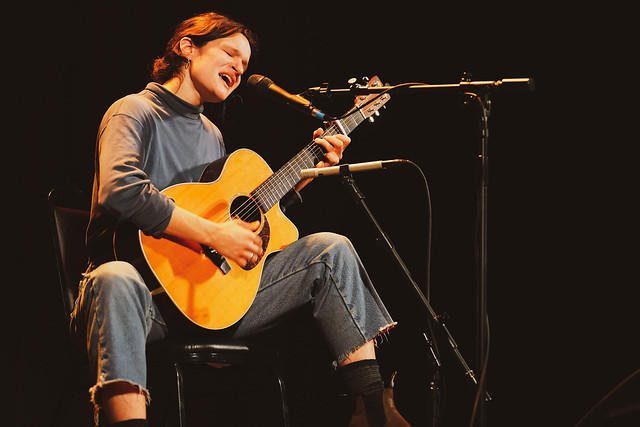 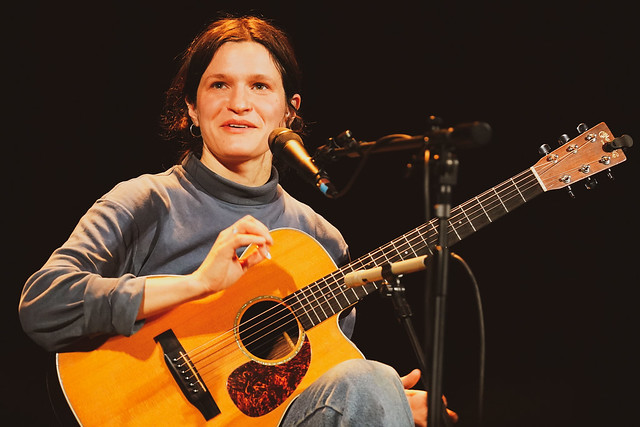 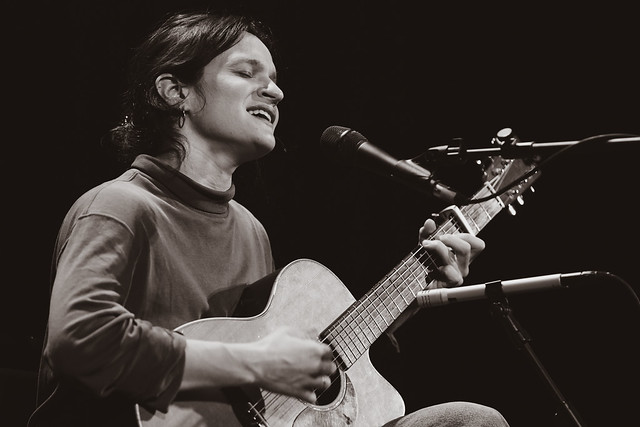 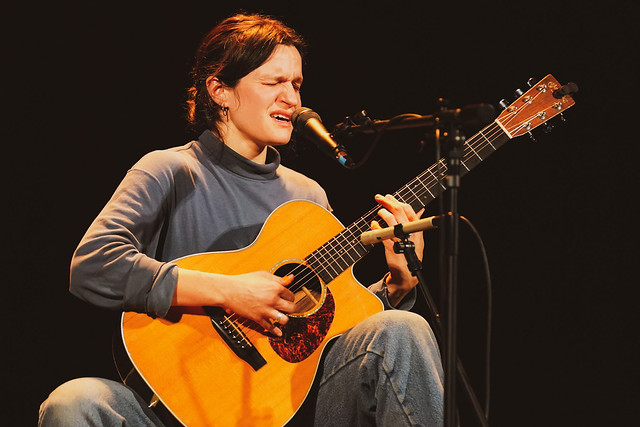 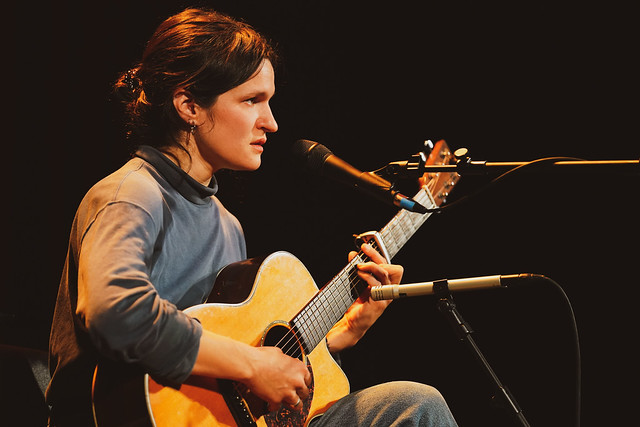 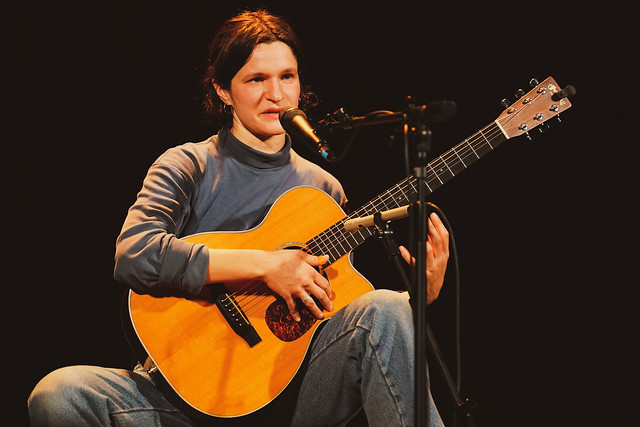 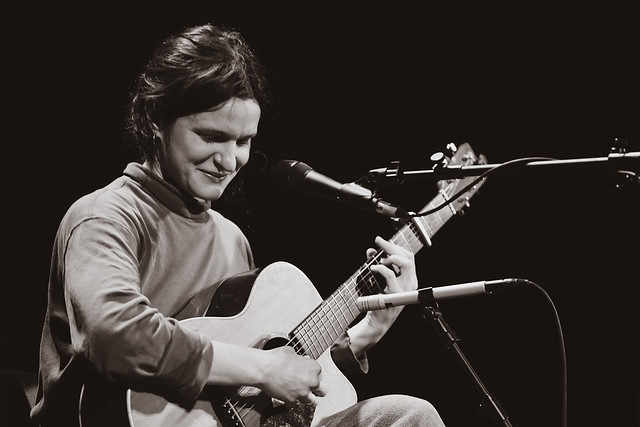 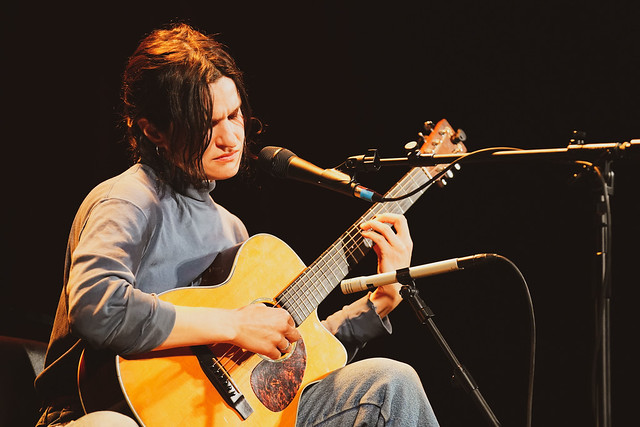 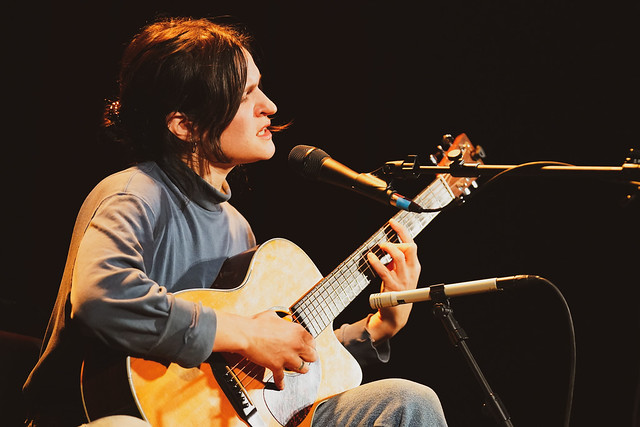 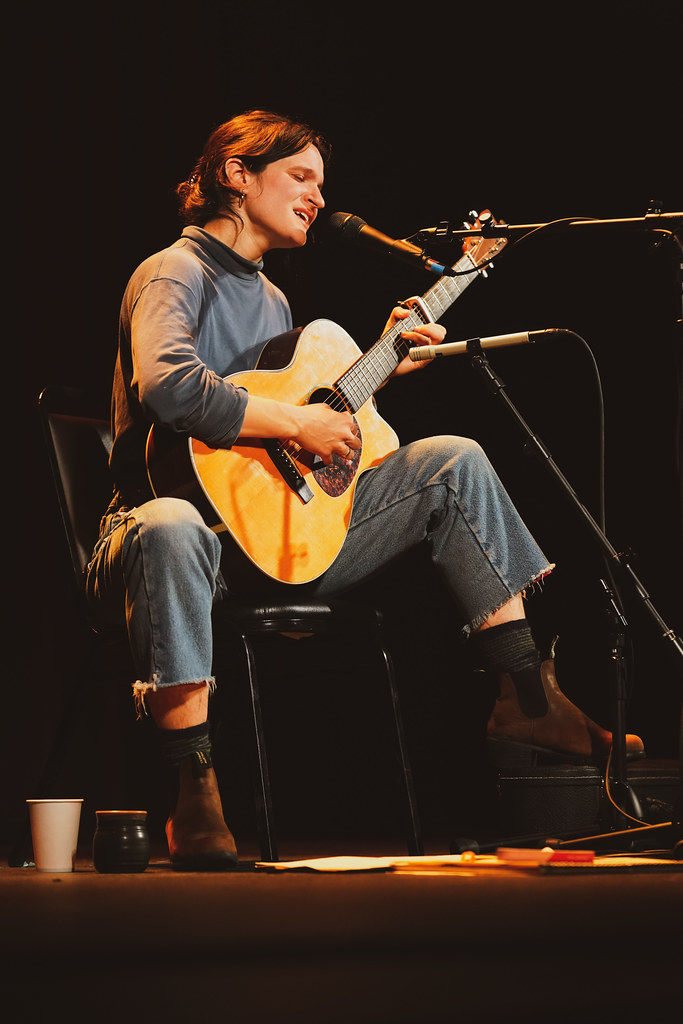 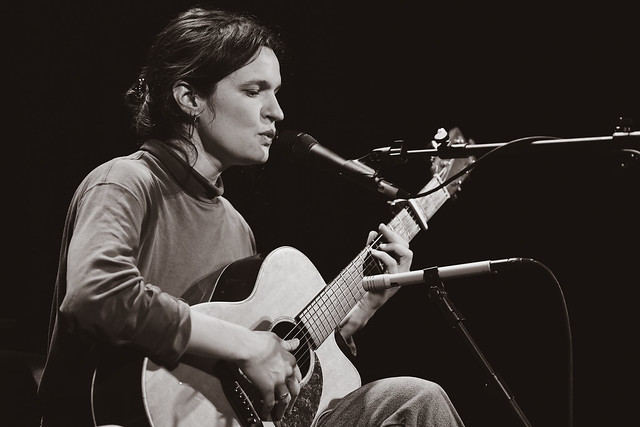 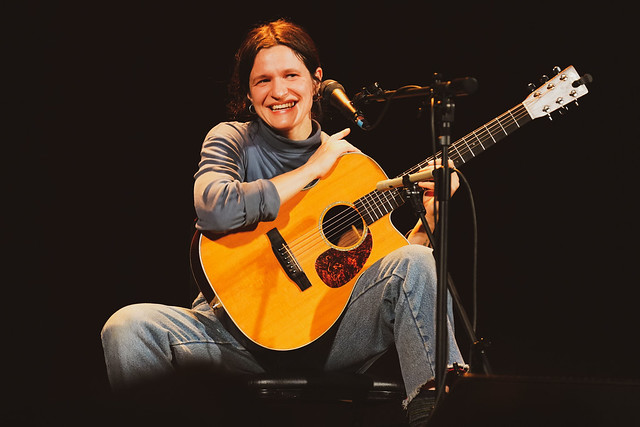 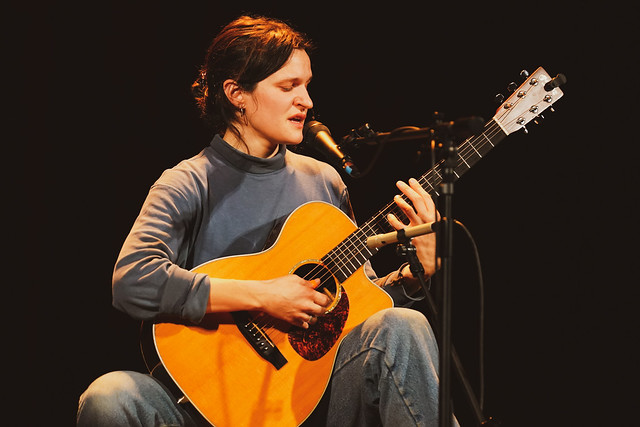 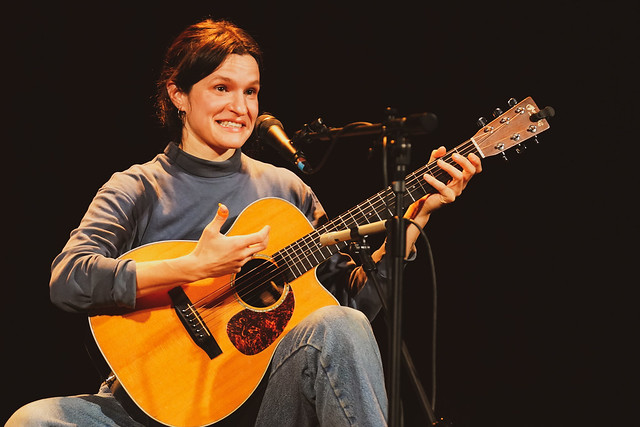 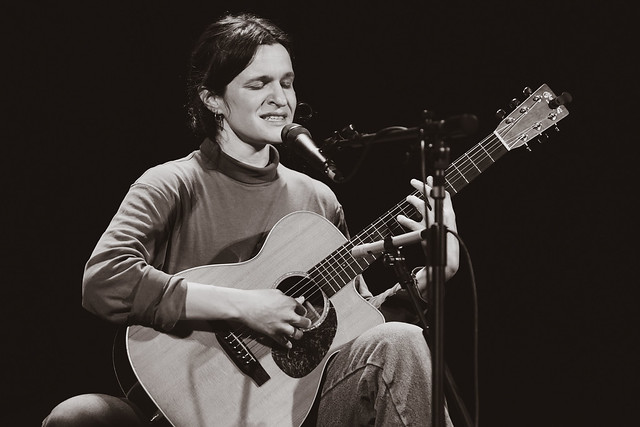 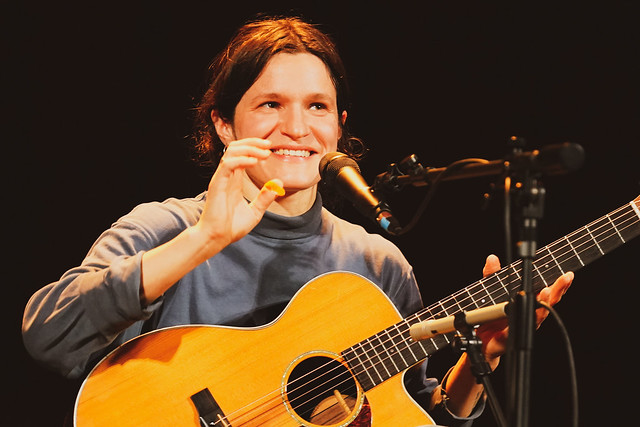 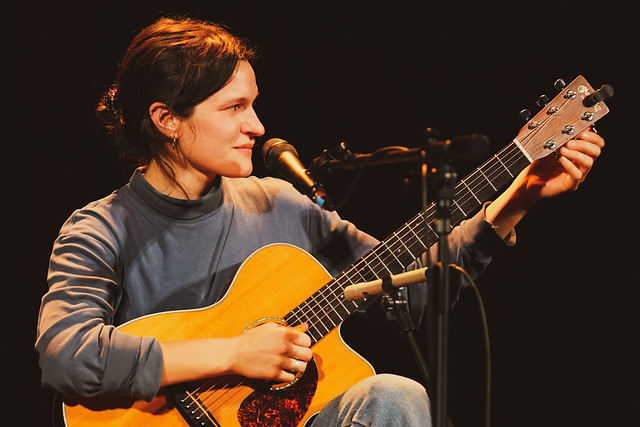 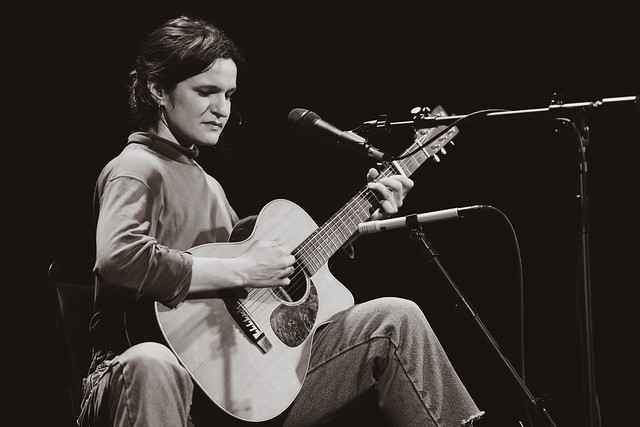 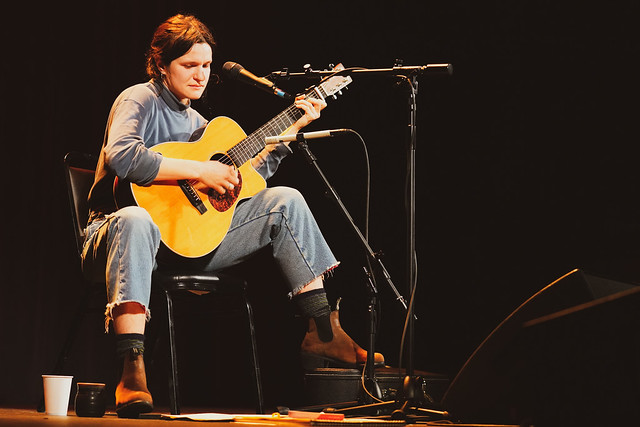 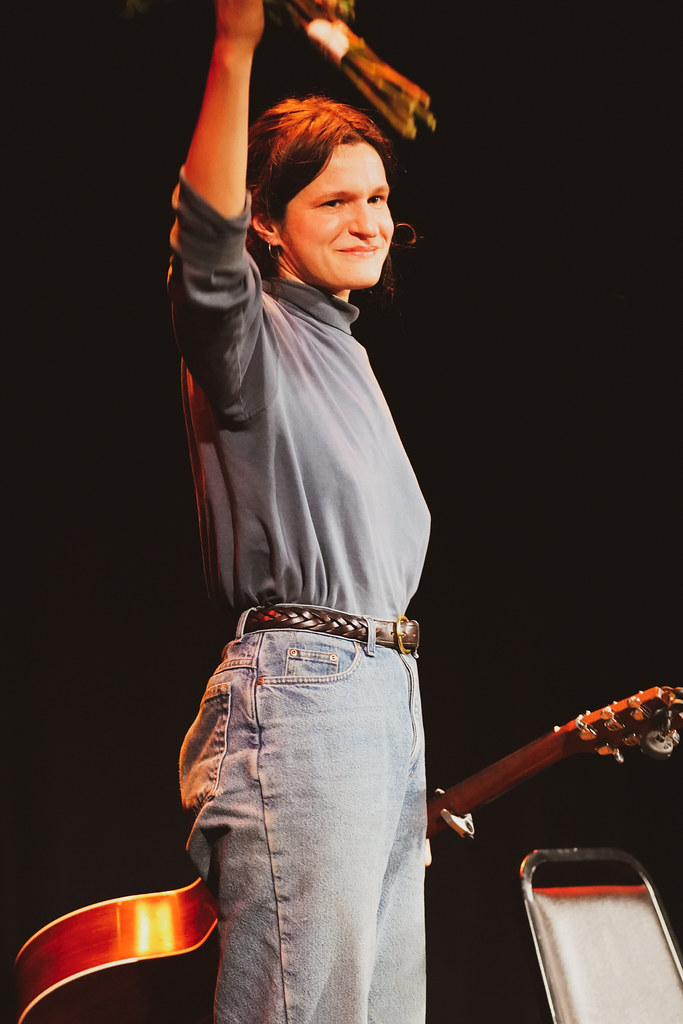 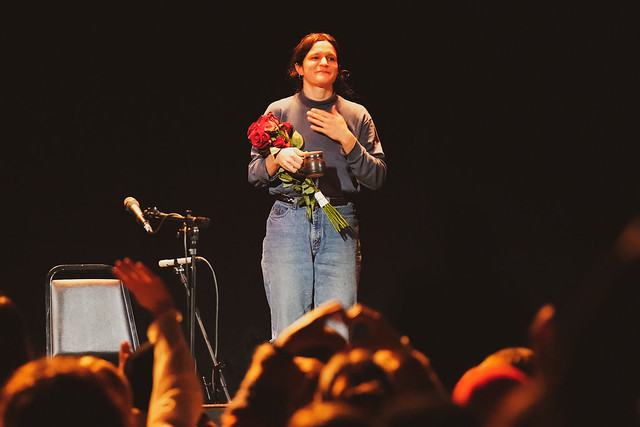 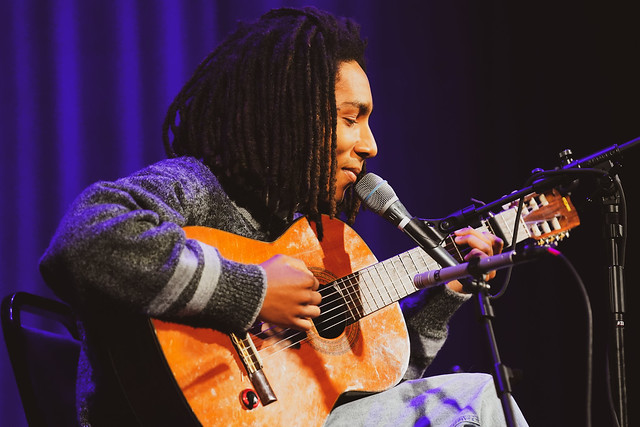 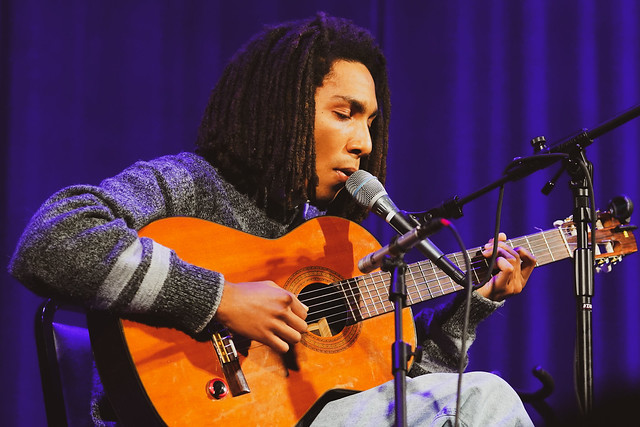 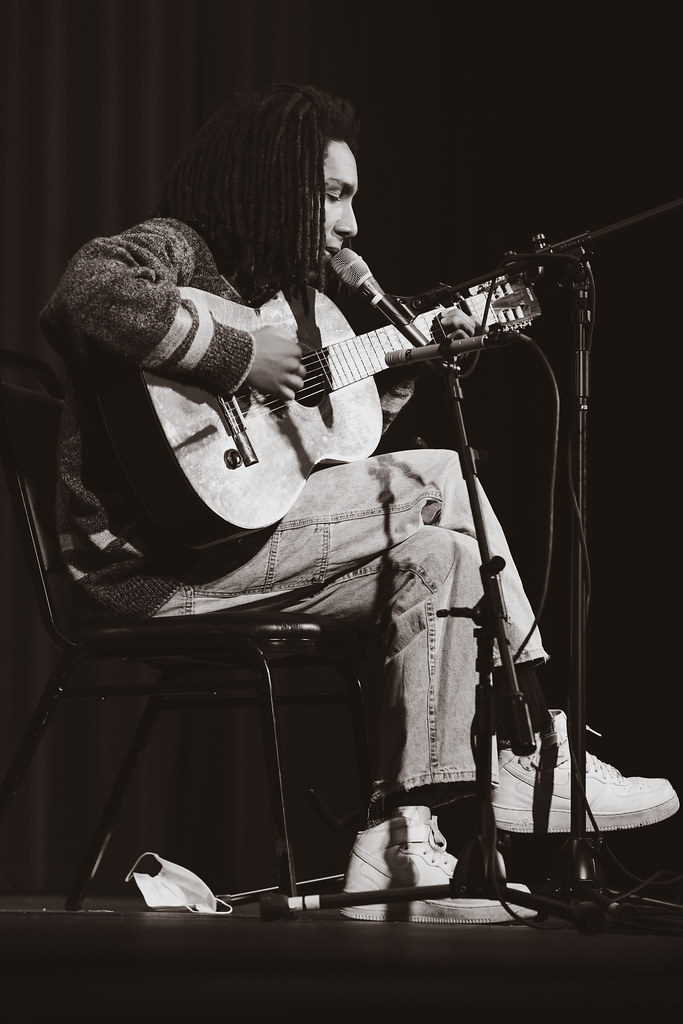 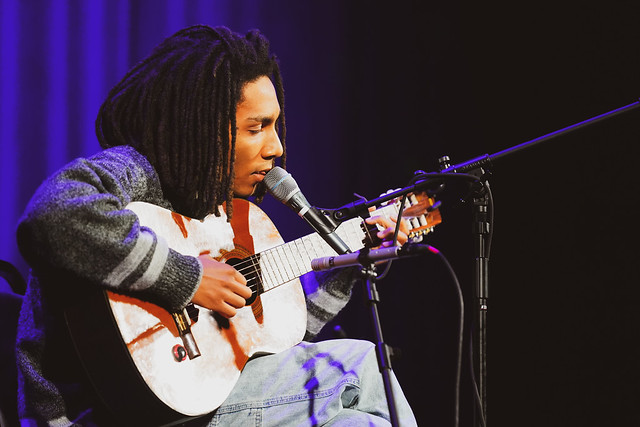 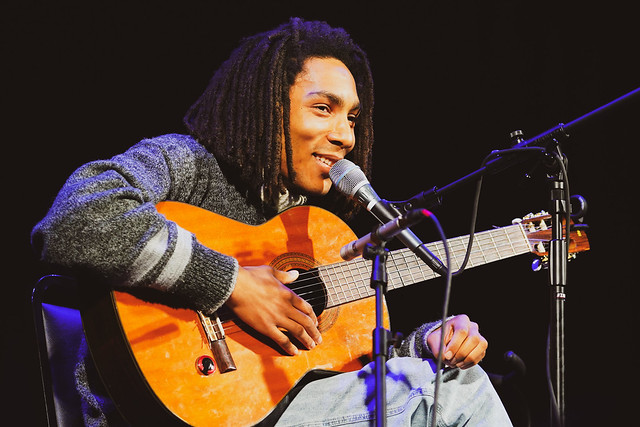