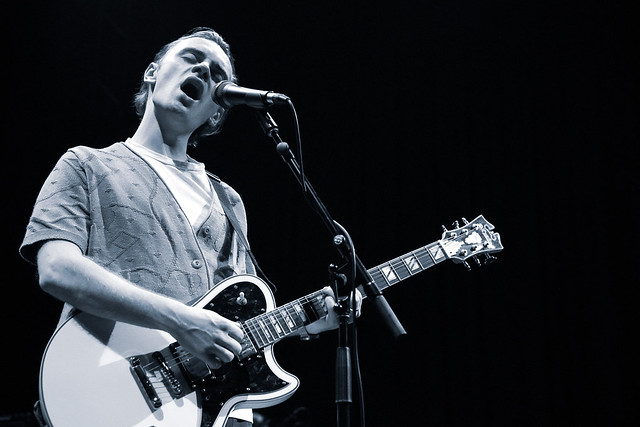 Jacob Allen leads Puma Blue in a performance at the Miracle Theater in DC on Nov. 20, 2021. (Photo by Casey Vock)

Musicians have such an arsenal of effective ways to reach potential supporters these days that genres and categorization become afterthoughts. And today’s resources are empowering a tremendous wave of artists who set out with no intention of adhering to any sort of conventions in the pursuit of their own organic sound.

London-bred singer songwriter Jacob Allen found his through making recordings in his bedroom, and he didn’t even need to leave the comfortable space to create a following. Since cutting and sharing a track called “Only Trying 2 Tell U” on SoundCloud back in 2014, he’s been able to steadily build that fanbase via his musical vehicle known as Puma Blue.

Tagged on Bandcamp as “dream soul,” “gothic R&B” and the perplexing “voicemail ballads,” and branded with a curious name, Puma Blue is intriguing before the first stream.

An outfit now spreading its time between London and Atlanta, Puma Blue made a stop last Saturday night at DC’s Miracle Theatre in a showcase of the group’s unusual articulation and quixotic fabric.

Graceful in mannerism and supple in mood, Jacob has concocted a particularly hypnotic realm where his sensual and saturated words are suspended amid a rich blend of imperfect melodies ranging from smooth jazz to electronica, from hypnagogic pop to far-out experimental rock. The evening of Nov. 20 at Miracle Theater, the stage’s dim fluorescent glow invited Jacob and his band to greet an audience that had packed around the stage to enjoy the music.

Watch the official video for Puma Blue’s “Opiate” single from the album In Praise of Shadows via the group’s official YouTube page:

“So happy just to be playing music,” Allen told the crowd, his pearl D’Angelico in hand, his thick accent hinting at where he might hail from. The Nov. 20 appearance was part of a North American fall tour supporting In Praise of Shadows, his first full-length studio album which was released in February and garnered positive commentary from the likes of The Fader, Billboard and more.

“It’s nice to have a while here (in DC),” he said. “We see so many cities and normally we have to be in and out. Today we had the whole day, and it was really cool. It’s a good place. Met so many good dogs today.”

Packing more punch than one might expect after a casual listen on Spotify, where Allen has well over 600,000 monthly listeners, Puma Blue owned the Miracle Theater stage with creamy, casual confidence in presenting a fetching assortment of uncommon compositions.

The audience was right underneath Jacob’s closed eyes as he rolled out chords both lively and downcast from one of his two electric guitars, the other a Fender Telecaster with a photo of his girlfriend, Liv, affixed to the body. Forging lightly warped, but warm vacillation with his hands, and crooning with the inmost heartache, Jacob’s instinctual groove carried into the second song of the night, “Cherished,” one that benefitted from Grant’s delicacy on the piano keys midway through a rippling serenade.

A single released in 2018, Lust — like several of Puma Blue’s songs with millions of streams — is not yet recorded to an album, but offered up in its live form was an engulfing freefall into desire, pulling the bodies in the room into a sway as Jacob conceded to the primitive wants he might never actualize:

“’Cause it’s you
I’m spiraling down into
Falling away to blue
Fading away too soon
And I’ll fade into a perfect shade of grey
Falling in lust again
Dreaming you into my bed.”

Standing up from the keyboard, Grant took to the saxophone, and his air — and stamina — turned this track into a winding journey into eroticism.

Allen allured throughout the night, his songs arranged to give his balmy expression time and space that invites an inevitably arresting puncture from his band, a group that expanded and augmented Puma Blue’s recorded abduction into something that didn’t just grab the listener but moved them as well.

Jacob was selfless in giving that credit where it was due, introducing these gentlemen and their impressive skillsets. He particularly praised Grant, whom he said had become a hit on this current tour with his “sexy looks.” Grant — eyes locked, barely flinching throughout the night — gave in and cracked a wry grin.

“Harvey’s got more fans than me,” said Allen, who himself demonstrated admirable patience throughout the night by bearing with a couple of fans who couldn’t control the volume of their own voices, turning what might have been frustration into comical eye contact with his bandmates.

“It’s really scary playing in a place you’ve never played before,” he shared. “I’ve never played in a cinema before. … I saw the Clifford (The Big Red Dog) poster. … That’s a tough act to follow.”
Addressing fears more gravid than venue concerns and challenges, Allen continued through the 16-song set, which included a good portion of the music released via In Praise of Shadows.

A track that might catch the ear of the contemporary film score and soundtrack fanatic, Puma Blue’s “Sheets” samples a short but recognizable piece from Jon Brion titled “Phone Call,” which was written for the film Eternal Sunshine of the Spotless Mind. He noted the stress of waiting for Brion’s permission and the official clearance — it took a year, with the payoff well worth it.

“This is about my girlfriend,” he said of a cut that seems to naturally weave his painful, helpless lyrics within a lasting lo-fi acoustic guitar and string arrangement that, if you’ve seen the movie or heard Brion’s music set to it, invokes wide nostalgia, even a longing. While it’s brief, this track’s lyrics were some of Jacob’s most striking of the night:

“Sinking into one
She blossoms between my fingertips
We become
Unraveling, undone

She has let me breathe
I came from the sea, saying
“What can I offer?”
She told me, “Just forgive yourself”

Her skin lets me sleep”

Shining light on Jacob’s contemporary hip-hop influences, “Bath House” is one of several standouts from his full-length album, with a pensive meter, perfectly layered vocals and followed by a magical, floating extension from Harvey who again seamlessly slid the saxophone into the groove, creating an infinitely euphoric sensation that trailed off tenderly.

“That’s my favorite song, bro! You killed it,” a young fan barked from feet away from Jacob.

Giving both Dawson and Dupuy a platform to shine, “Moon Down Undah” is another of Puma Blue’s singles put out in 2018, is an illustration of Allen’s vision, one driven by infectious, fat bass lines and jiving beats from the drum kit. This track exhibited slight deformities in the guitar and keys — it swelled and swirled, burned out and reignited again, all while Jacob’s spirit emitted unequivocal, agonizing poetry through his microphone.

“Oh moon under water
You could not know what to do if I fell
And took you to the blue
So don’t speak, don’t explain
How you could bleed this boy
He is numb, so in love, with a sexy little thing

Oh, moon
With all of your grief
Won’t you set these seas aside for me
So I may lay eyes upon my sweet, sweet moon

In what was only his second appearance in the nation’s capital, Allen validated the diligence and sweat he’s put into the Puma Blue outfit — allaying, provocative, a departure from reality where you can toil over your most lascivious urges and mull whatever it is that stands in their way.

With a growing fanbase, a talented posse of instrumentalists who’ve bought in and a commitment to an authentic style, Puma Blue will no doubt make its way back to DC as Allen and his crew continue to pioneer new aural terrain.

Here are images of Puma Blue performing at Miracle Theater on Nov. 20, 2021. All photos copyright and courtesy of Casey Vock. 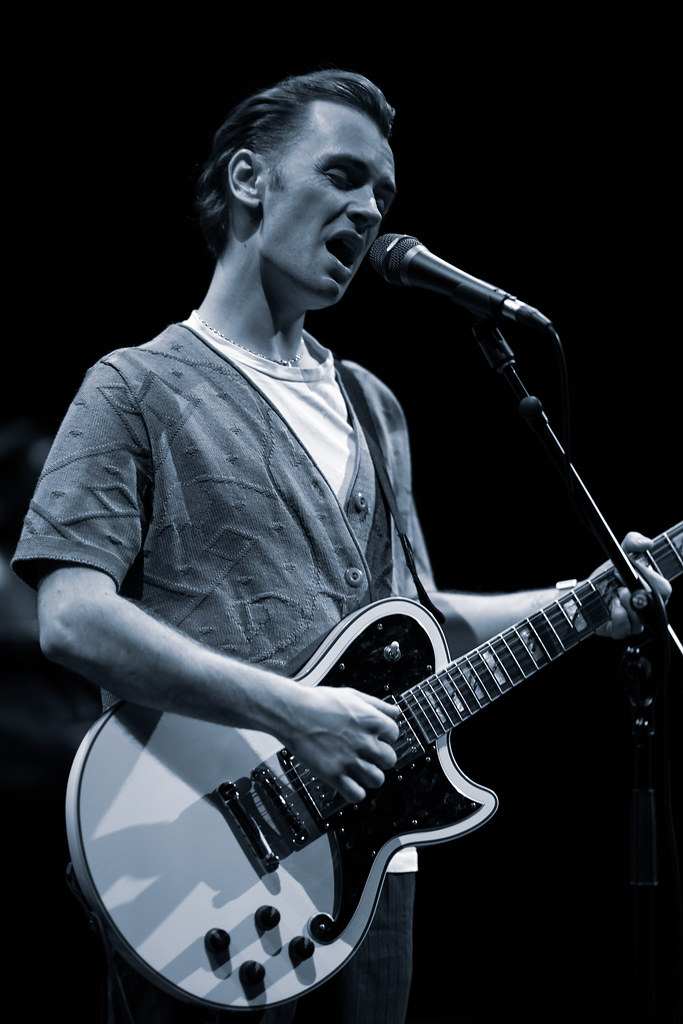 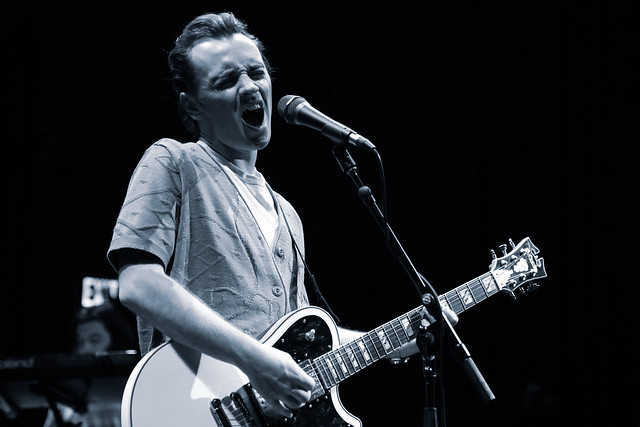 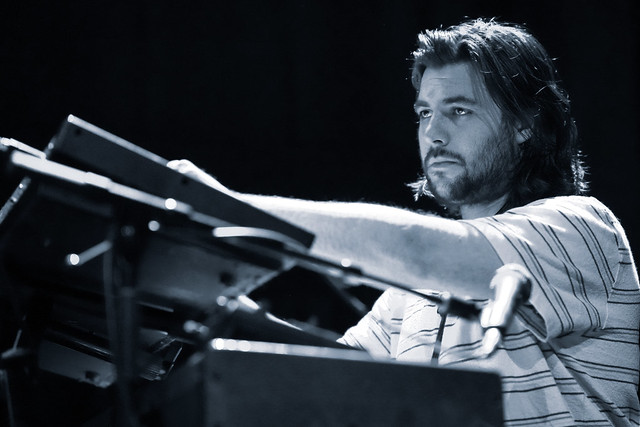 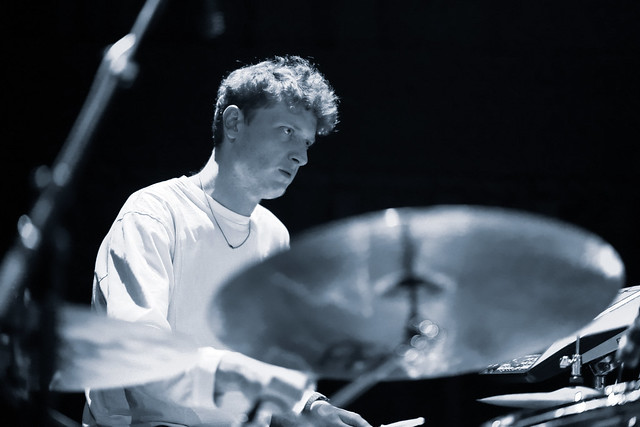 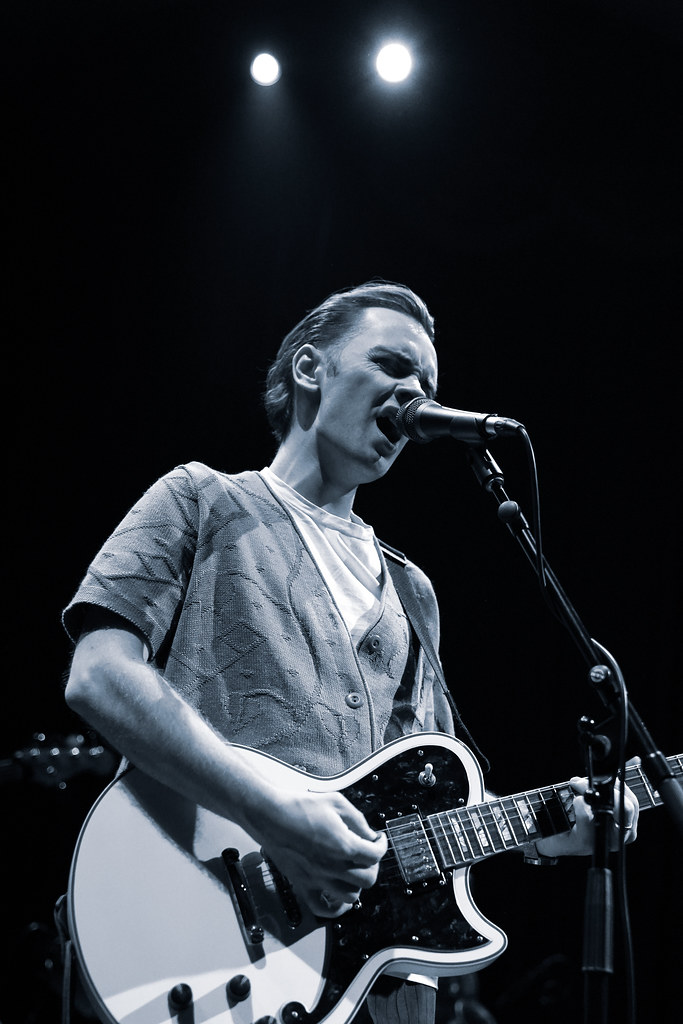 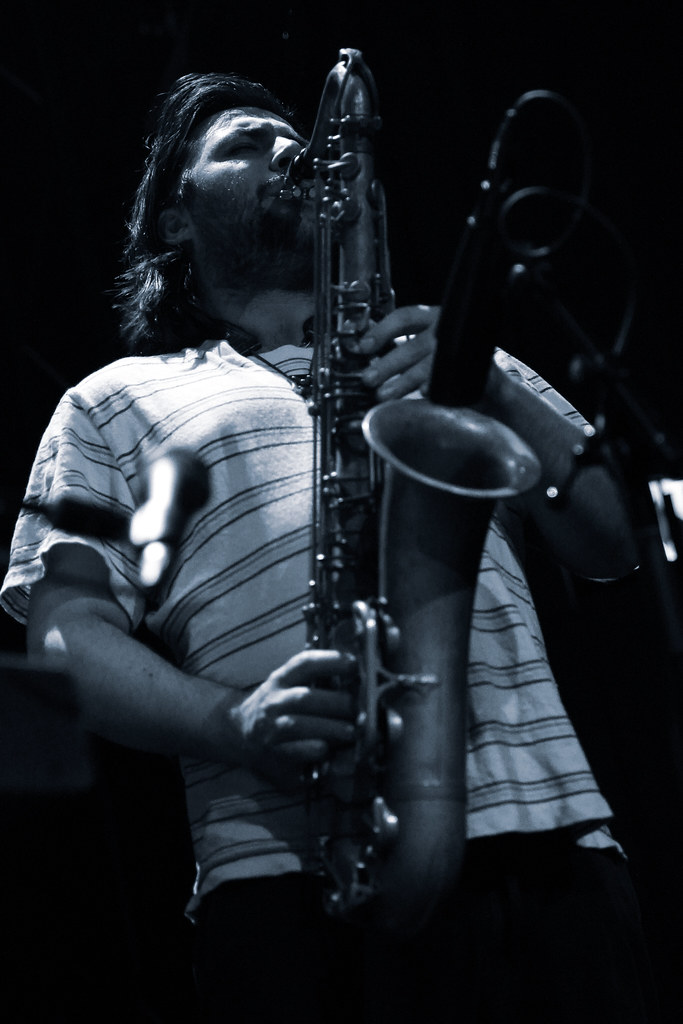 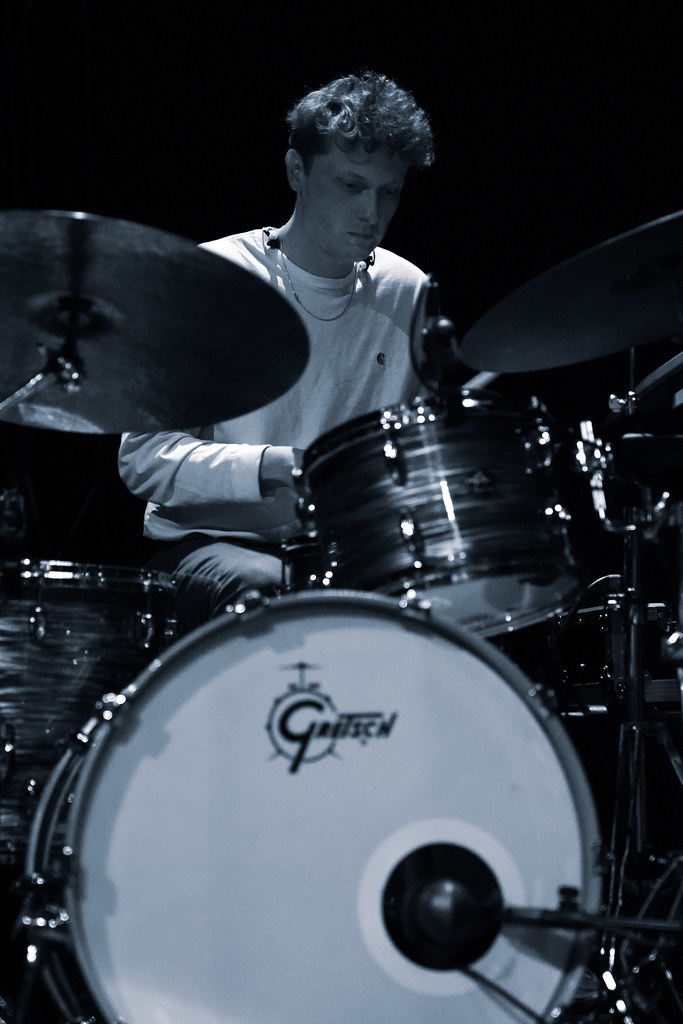 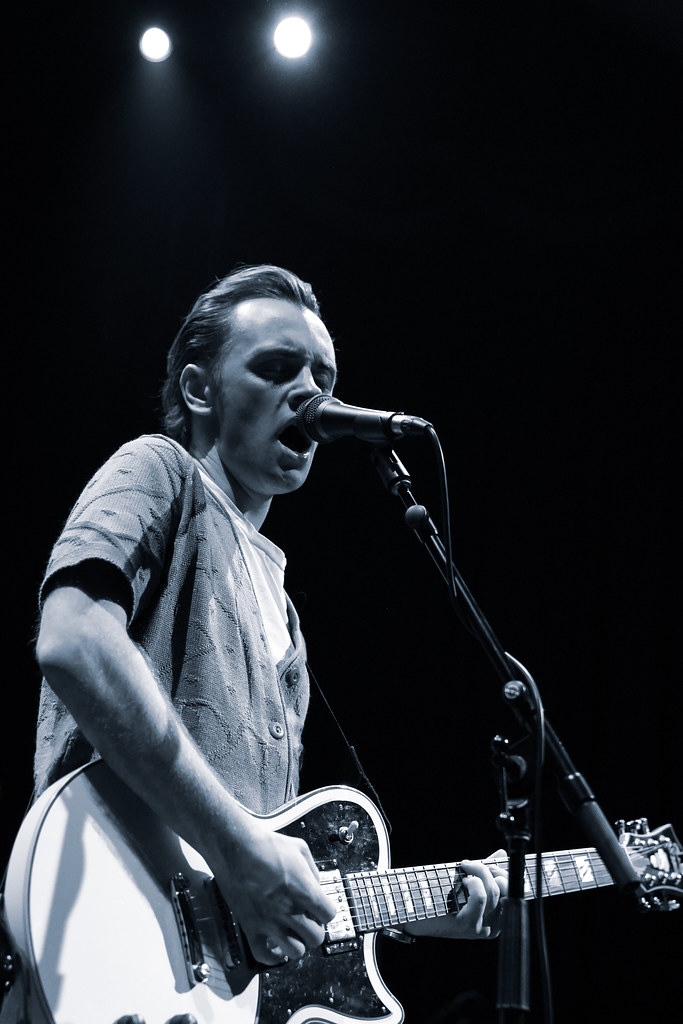 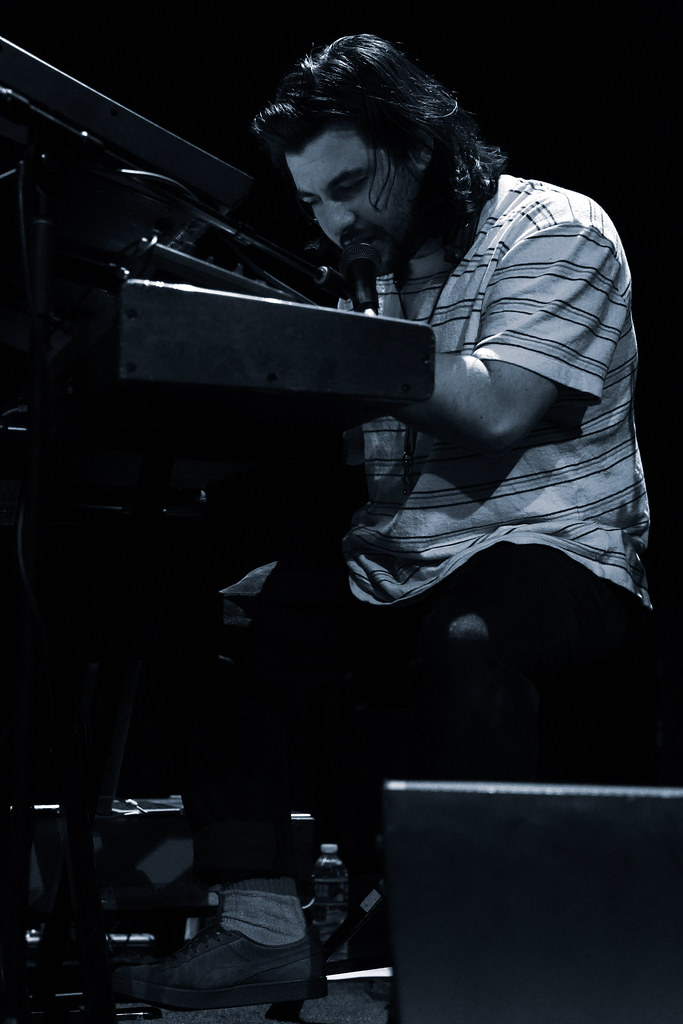 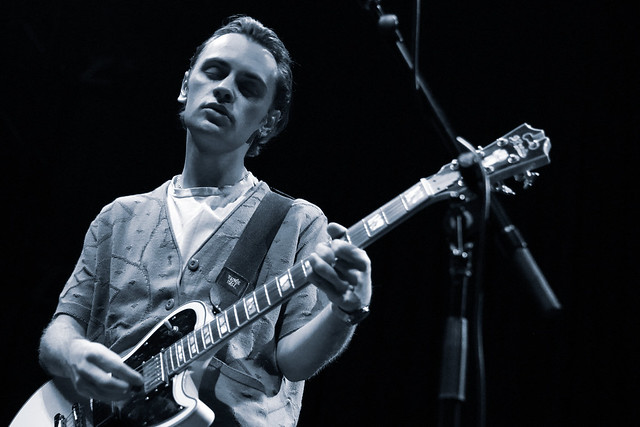 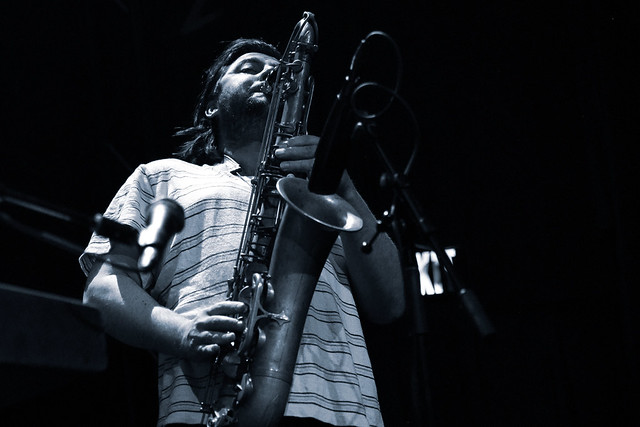 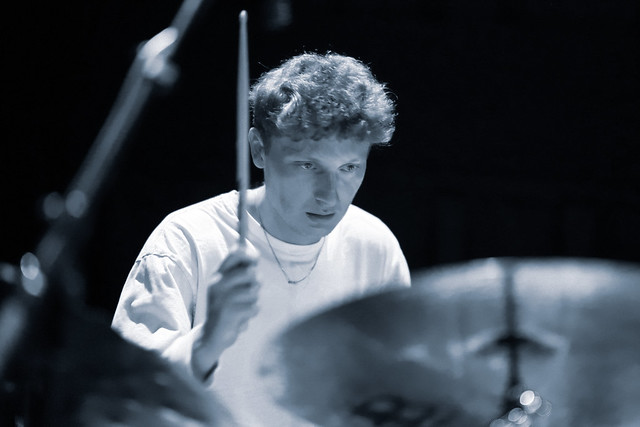 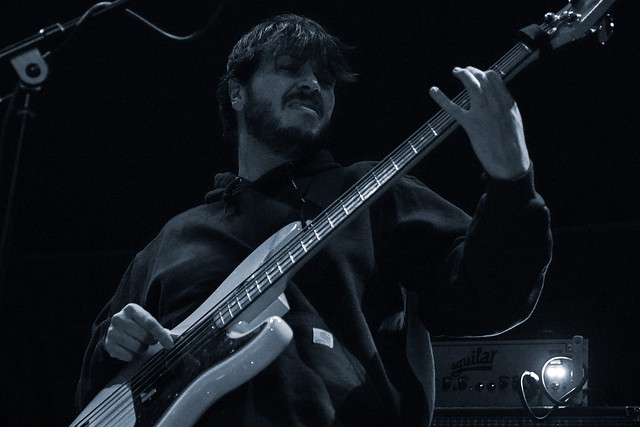 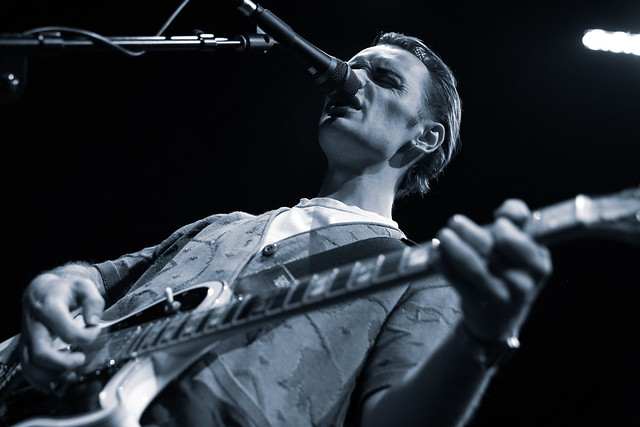 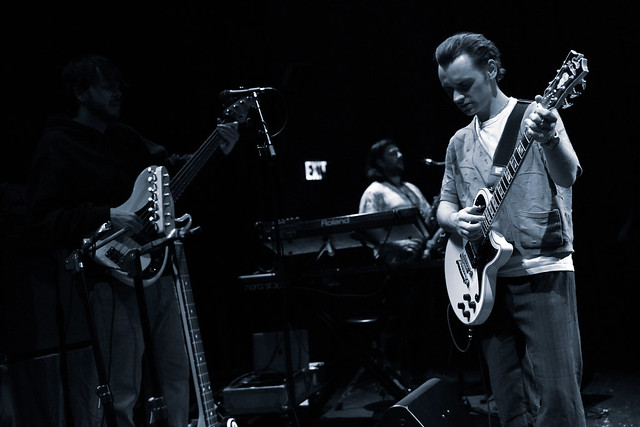 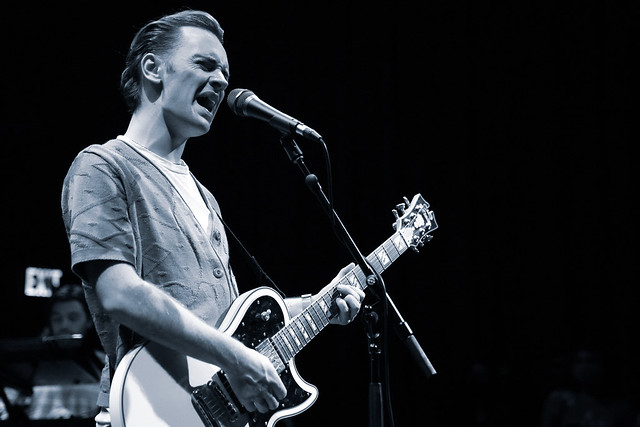 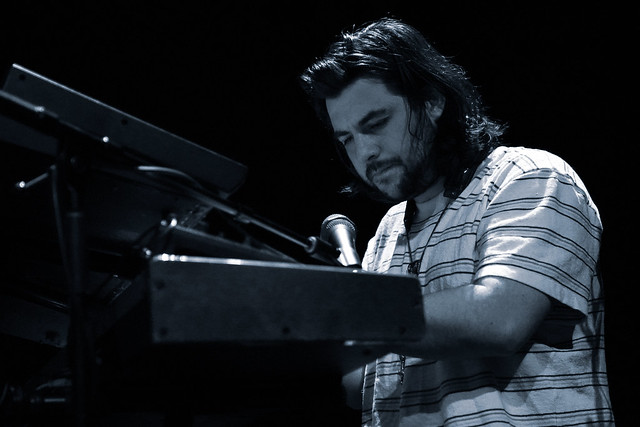 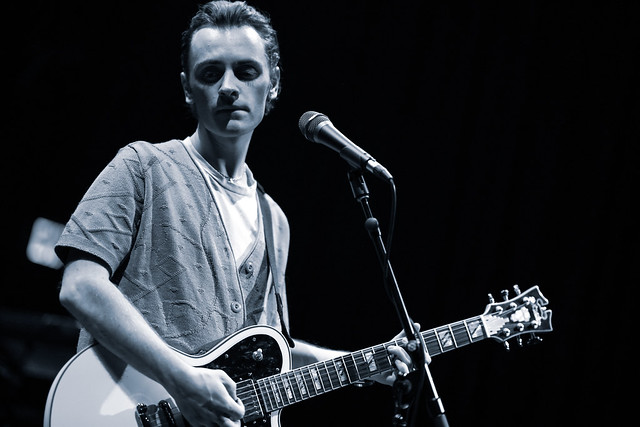 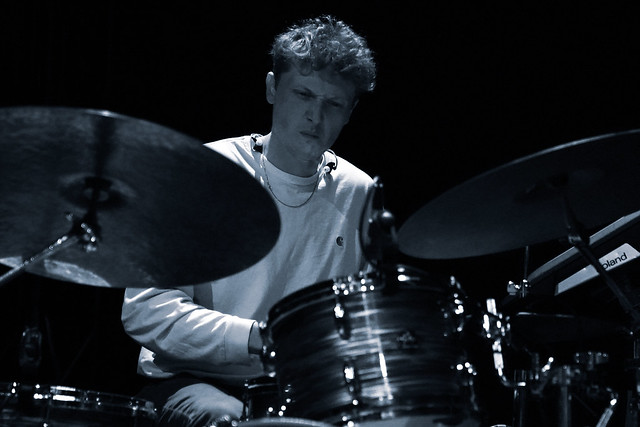 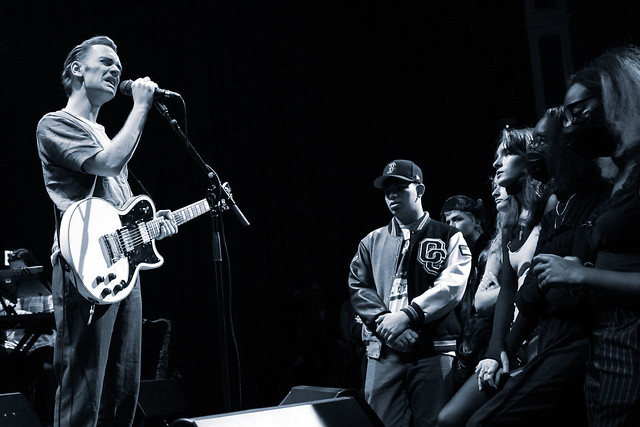 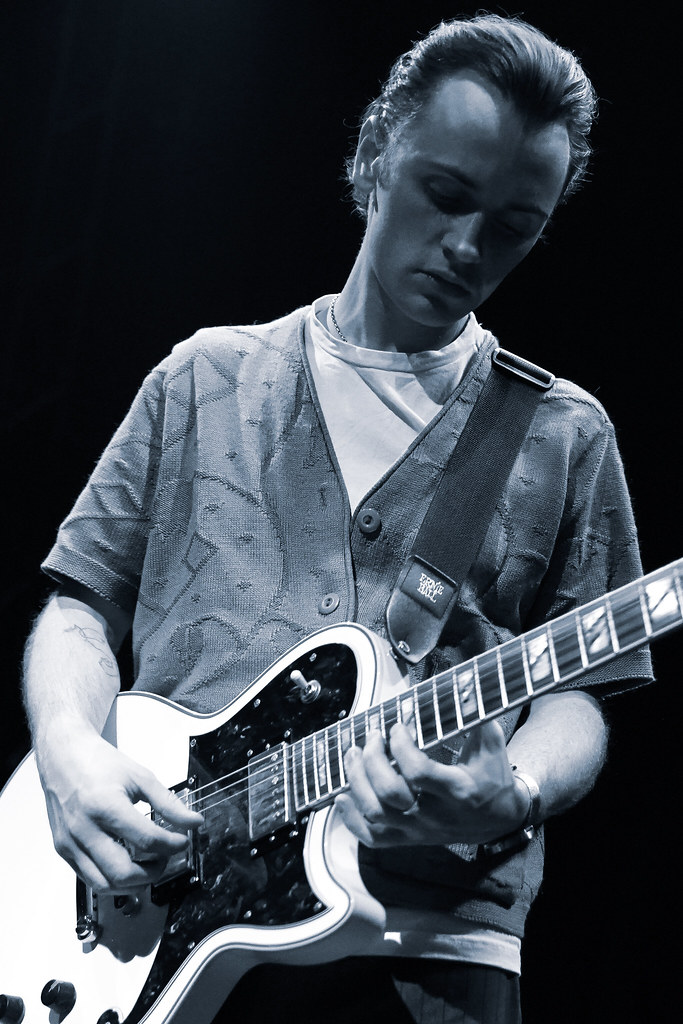 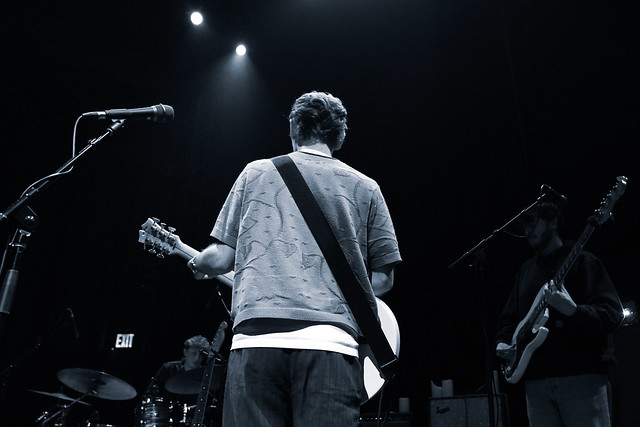