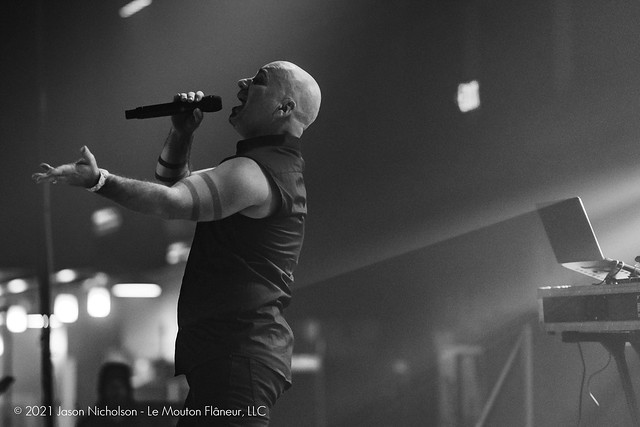 Nitzer Ebb lead singer and cofounder Doug McCarthy was “being admitted to hospital [the previous night in Florida] and is now stable and undergoing continued treatment and observation suffering from complications from a pre-existing, non-Covid medical condition,” according to a press release.

“Doug expressed his wish that the tour continue with Bon [Harris] stepping in to perform lead vocals,” said the release — and that Bon did! Despite Doug’s absence, Nitzer Ebb amazed at Baltimore Soundstage recently.

Taking frontstage and leading everyone in the packed filled Baltimore Soundstage to “Join in the Chant” on Nov. 20, Bon was joined on this tour with original cofounder and drummer David Gooday, who took over programming synthesizers — typically the duties of Vaughan “Bon” Harris. Confused? No need to be! Everyone joined in the throbbing beat of an evening filled with some of the best Electronic Body Music conceived by one of the pioneering bands of that music genre.

Stream That Total Age by Nitzer Ebb on Bandcamp:

Parklife wishes Doug McCarthy a speedy recovery, and we look forward to seeing him on Nitzer Ebb’s next tour

Opening up for Nitzer Ebb was a Baltimore local darkwave band Aertex lead by local area favorite Josephine Olivia on vocals, Chris Moore on drums, and Pat Vogel on guitar.

Stream “Superstition” by Aertex on Bandcamp:

Following them was Stoneburner, the solo project from Steven Archer, which combines self-described “tribal fusion electronic dance music with experimental sounds.” Steven a multifaceted musician, artist, and writer, led the evening wearing a wolf’s headpiece, circling the stage like a predator hunting for flesh. Steven was joined by drummers Hemlock and Nathan.

Via email, Steven commented that his mask, which he made, embodied a character from the new Stoneborner song, “Apex Predator.”

“The mask has a ton of RED ultra bright LEDs in it. The eyes are 1000-watt LED floods. It’s made of foam core, sculpture foam, bondo, painted and lacquered to hell and back,” he wrote. “The second mask has two layers. The top layer is thin sheet metal with sculpture foam over it. The bottom is foam core built up with bondo, copious amounts of gorilla tape, and the mirrors.”

Here are some photos of Nitzer Ebb, Aertex, and Stoneburner performing at Baltimore Soundstage on Nov. 20, 2021. All photos copyright and courtesy of Jason Nicholson. 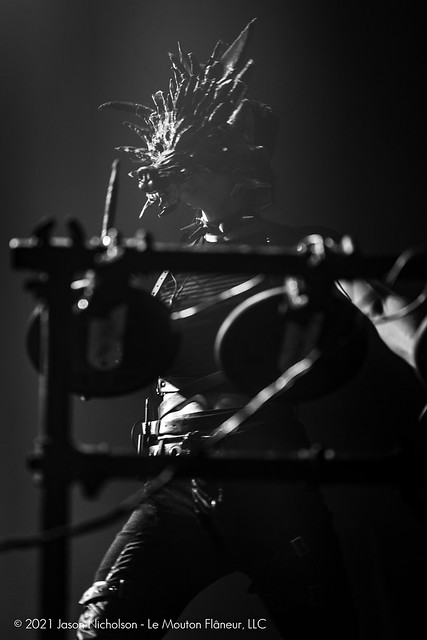 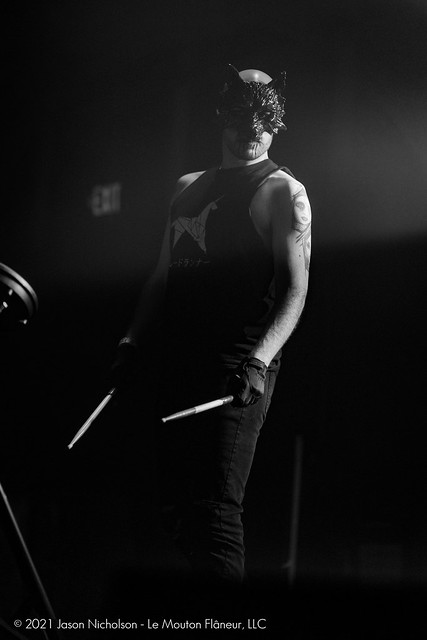 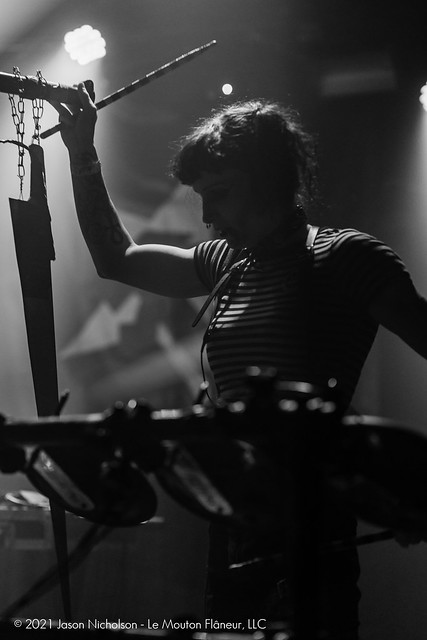 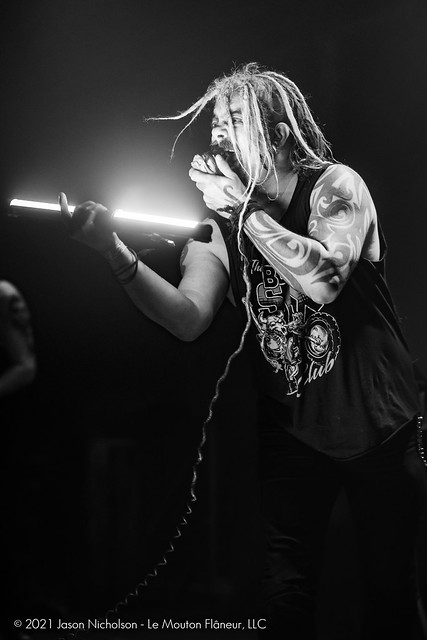 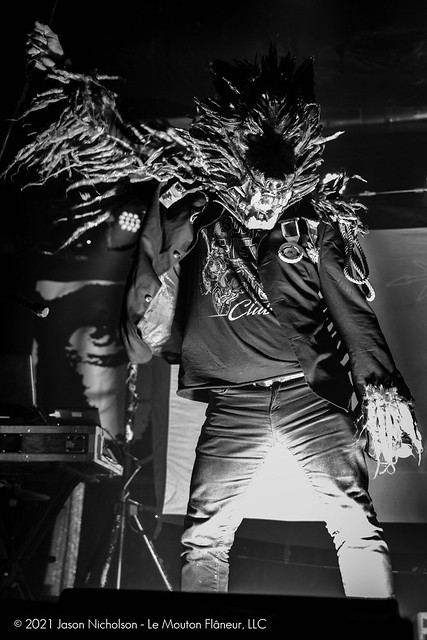 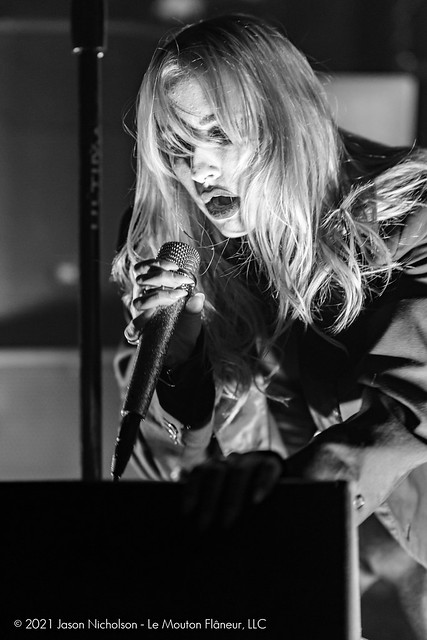 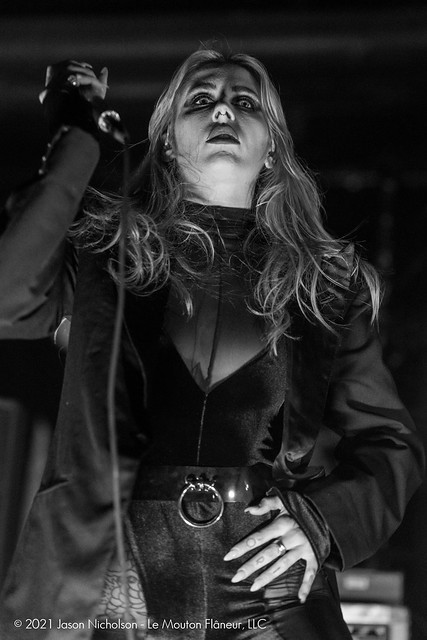 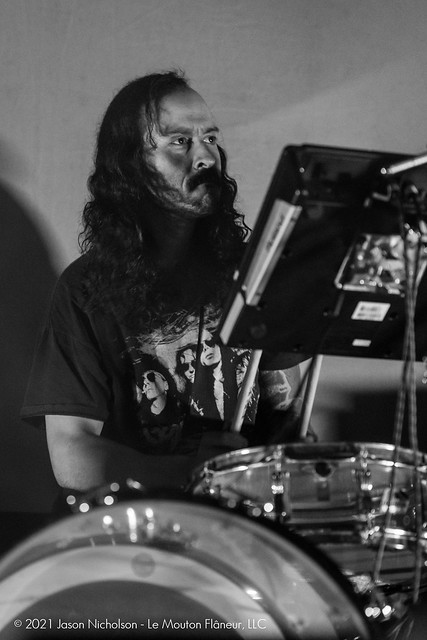 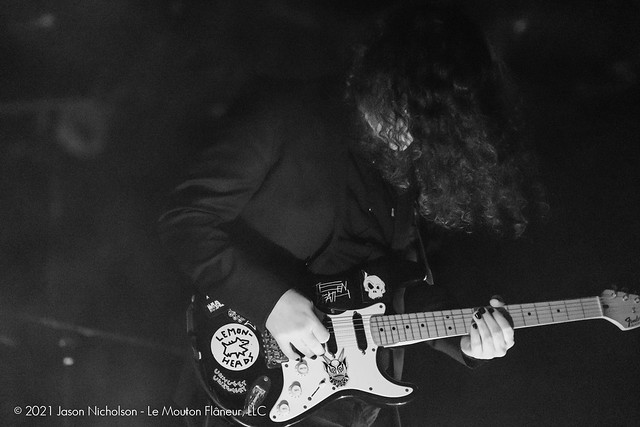 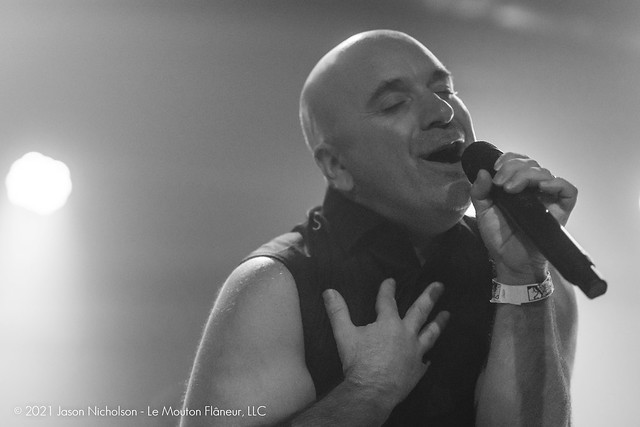 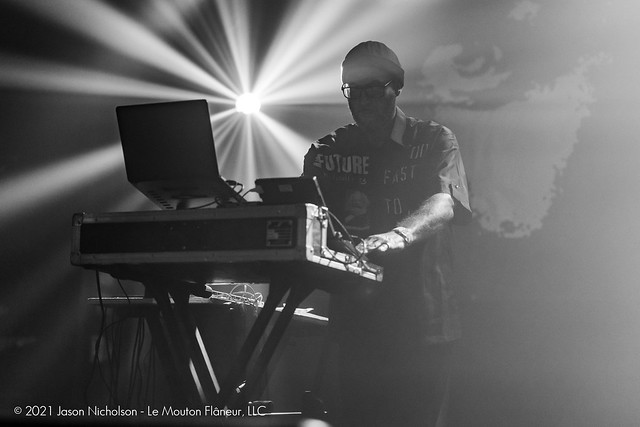 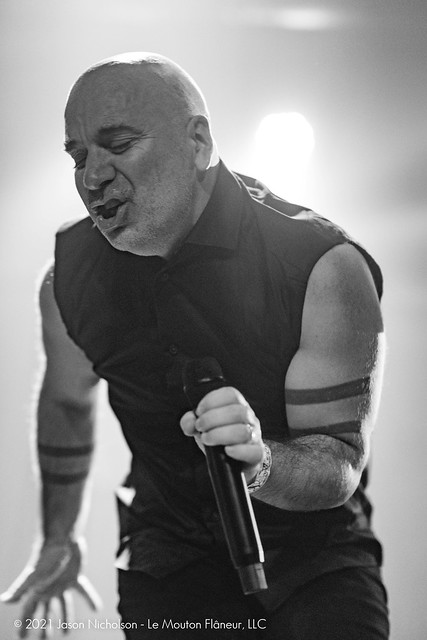 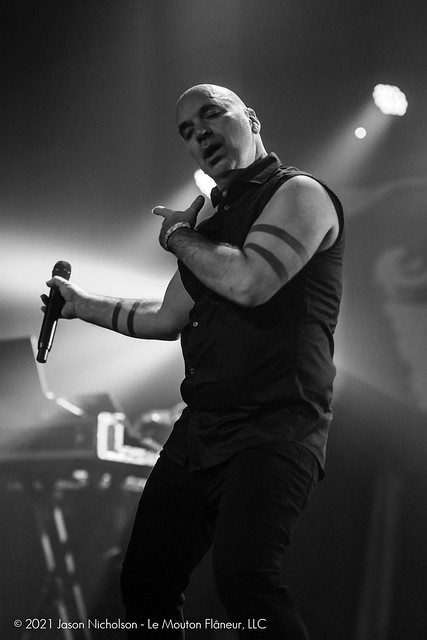 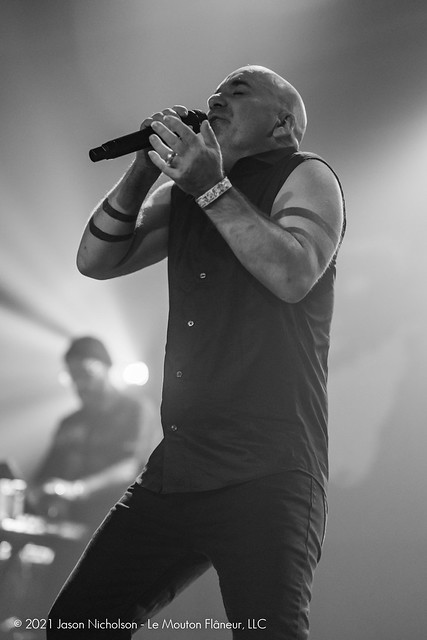 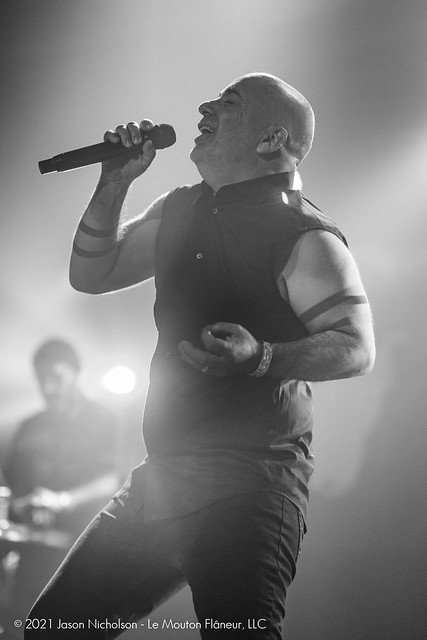 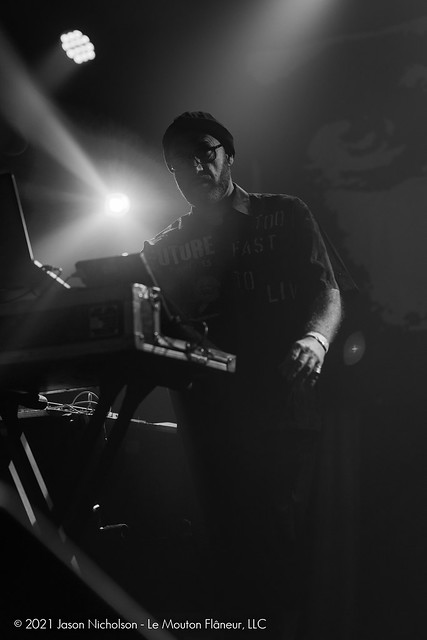 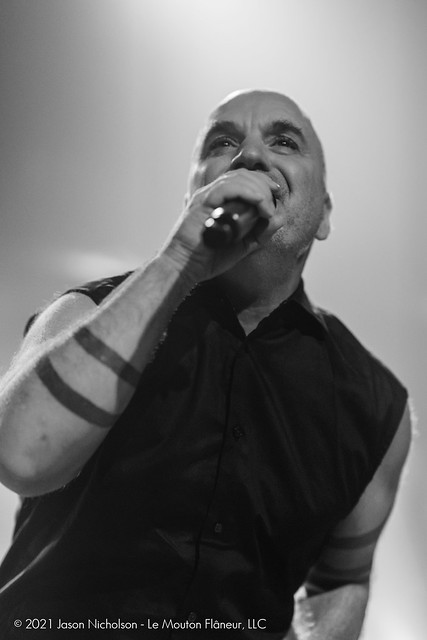 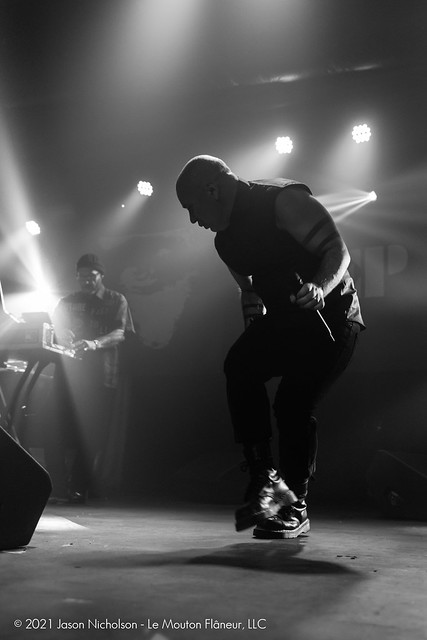 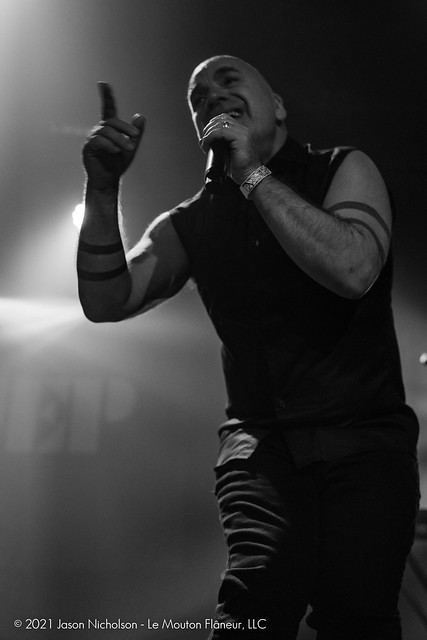 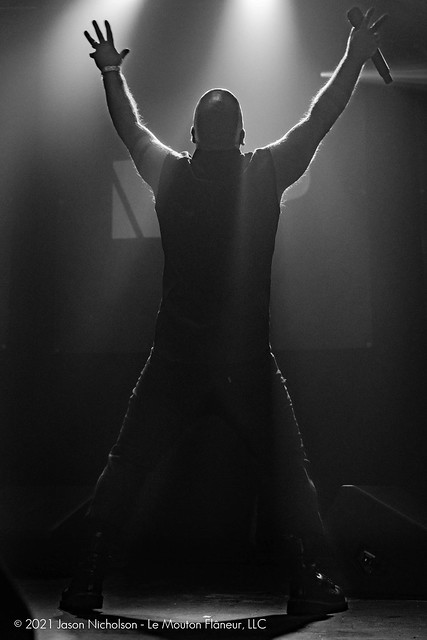 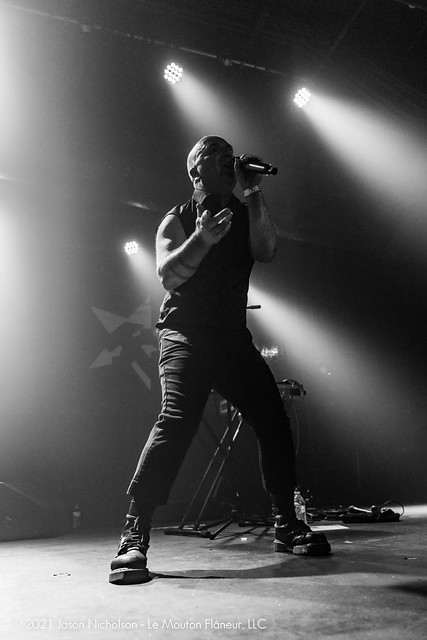 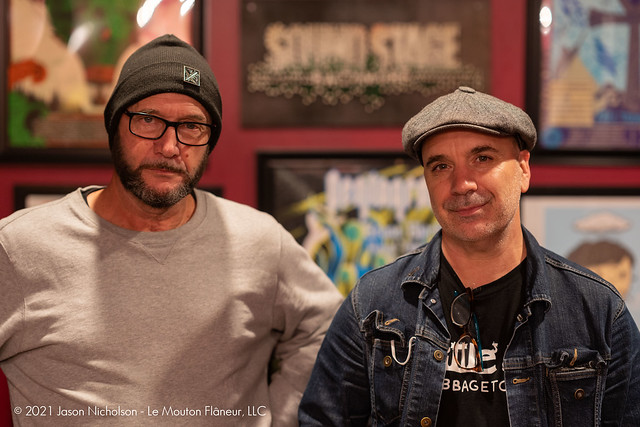