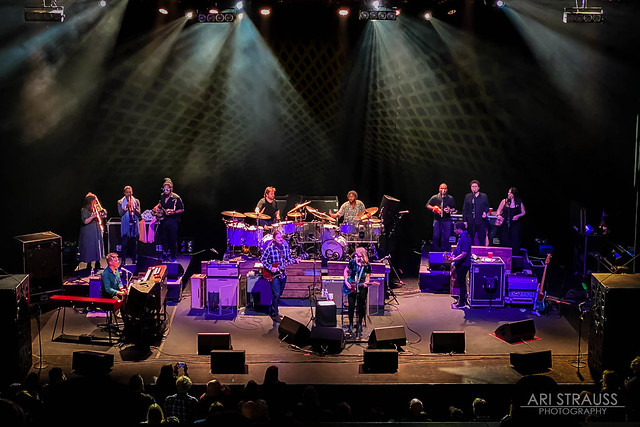 Tedeschi Trucks Band performs the second of six shows in their 2022 residency at the Warner Theatre in DC, Feb. 4, 2022. (Photo by Ari Strauss)

Tedeschi Trucks Band, affectionately known to its fans as simply, “TTB,” is back in DC for its annual residency at Warner Theatre, with six concert dates. The 2022 tour dates are the band’s first at the historic DC venue since the days immediately preceding the COVID-19 pandemic in 2020. This lucky correspondent was able to attend and cover the second of six performances.

TTB still puts out the same 12-piece blues-driven big-band sound that has made it one of the most acclaimed live acts of the past decade. However, there are a few notable evolutions since its previous visit to the Warner in 2020.

Most noteworthy, drummer Isaac Eady joined the band’s fulltime lineup in August 2021 following the departure of JJ Johnson who moved on to pursue other artistic opportunities after a decade with TTB. The band’s other drummer, Tyler Greenwell, has switched drum position and now plays from the kit toward stage right, formerly occupied by J.J. Johnson, and Isaac takes Tyler’s old spot at the kit closest to stage left.

Also changing stage positions, bassist Brandon Boone is now down front, to Susan’s left, swapping spaces with the horn section who are now on a riser behind keyboardist, Gabe Dixon. This new setup started during the band’s first pandemic performances as a 12-piece at LOCKN’ 2021. They found it offers a better layout on stage and a more balanced sound, so they’ve stuck with it.

Speaking of LOCKN’, TTB’s most recent album release is a live recording of its LOCKIN’ 2019 appearance with Trey Anastasio to perform a full-album cover of Derek and the Dominos seminal 1970 album, Layla and other Assorted Love Songs.

I noticed there appeared to be an effort in the Feb. 4 show to spread around lead vocal opportunities. Harmony vocalist Mike Mattison came down front multiple times to take lead vocals on “Until You Remember,” “Right on Time,” “Gin House Blues,” and “I wish I Knew.” Keyboardist Gabe Dixon knocked it out of the park with the lead vocals on cover of The Allman Brothers Band, “Dreams.”

My original notion was that the sharing of lead vocal duties was a byproduct of the fact that Susan Tedeschi (lead vocals) was nursing a sore leg and spent a considerable time seated during the show. (Susan mentioned at the start of the second set that she needs surgery on her knee but cannot do it until a break in the tour in March.) However, in speaking with people in the know after the show, it seems that It just depends on that night’s set list.

Some songs in the band’s catalog are written or cowritten by Mike, and he tends to take lead vocals on them. He also takes lead on songs like “I Wish I Knew,”  which were in the repertoire of one of TTB’s predecessor bands, The Derek Trucks Band, which featured Mike on lead vocals. There are also certain songs that Gabe always takes lead on like “Dreams,” which was included in the second set.

There appeared to be more featured solos spread throughout the show. In addition to Derek’s masterful guitar solos throughout the show and the obligatory improvisational dueling drum solo on “Misunderstood,” Gabe put on two extraordinary solos on keys during, “Until You Remember,” and “Gin House Blues.” Kebbi Williams (sax) shifted the band from blues to hard bop jazz with a John Coltrane-esque tenor sax solo on “Don’t Know What It Means. Ephraim Owens (trumpet) channeled his inner Miles Davis with a cool jazz solo on the closing number, “I Wish I Knew,” which also contained vocal solos by harmony singers, Mark Rivers and Alecia Chakour.

The final show on Feb. 19 is sold out. Limited seating remains for the shows on Feb. 17 and 18, so act fast! Visit the Warner Theatre website for more information.

Enjoy some photos from Tedeschi Trucks Band’s Feb. 4 performance at Warner Theatre.  All photos copyright and courtesy of Ari Strauss. 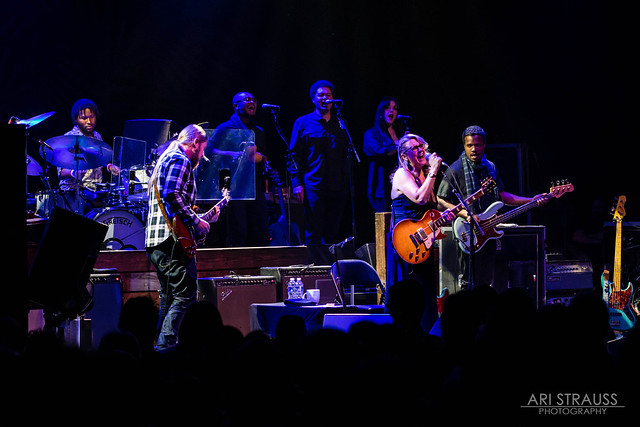 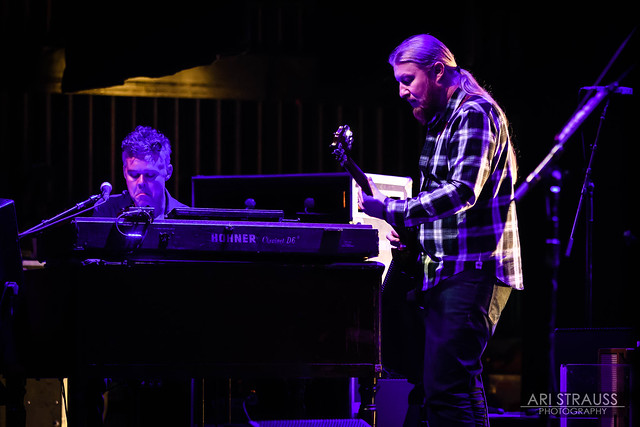 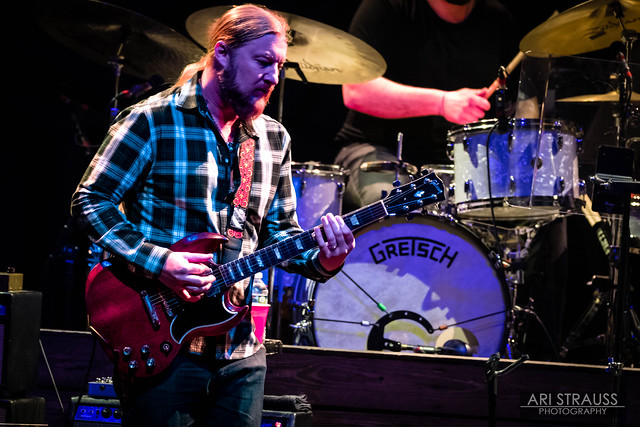 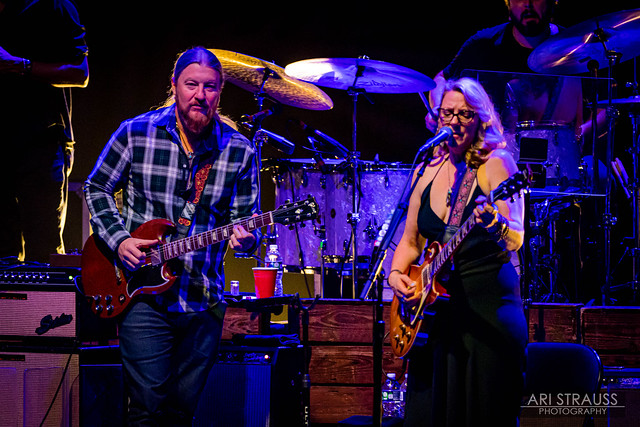 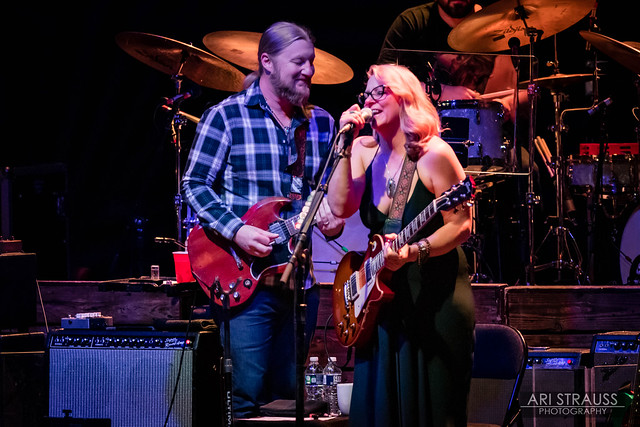 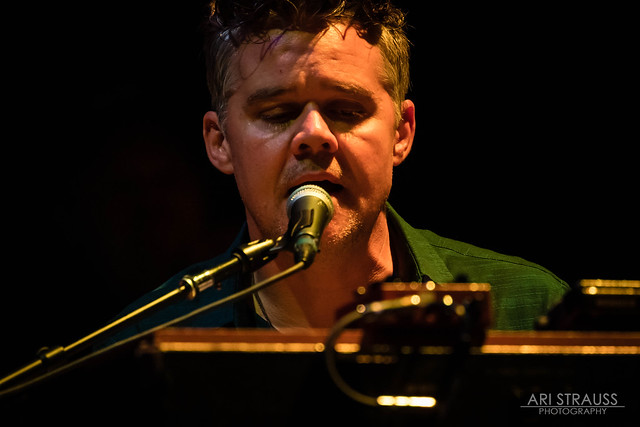 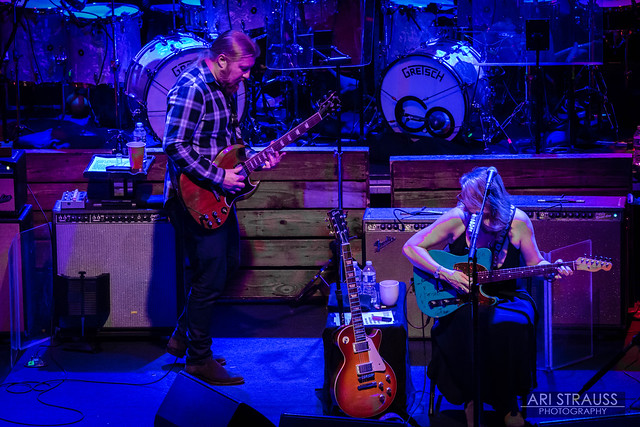 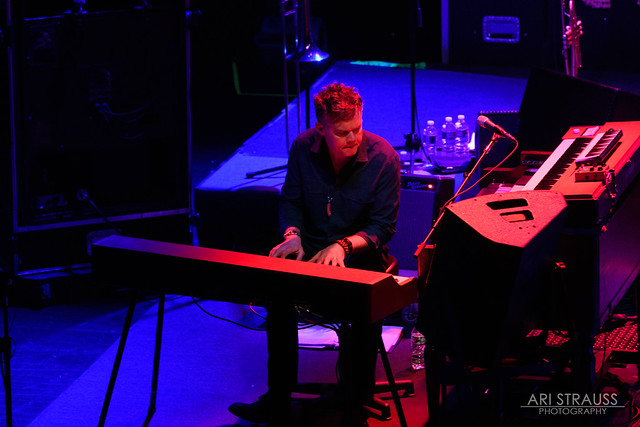 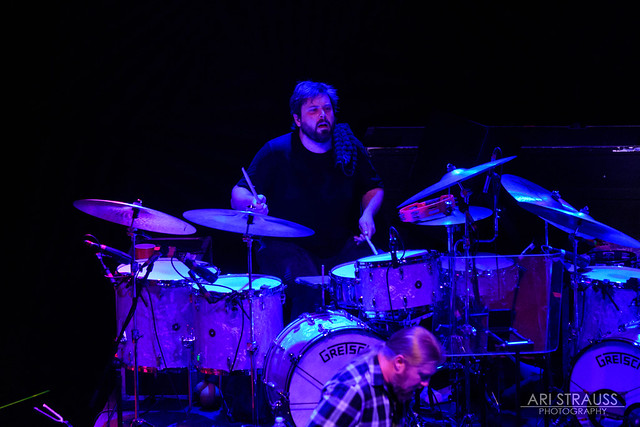 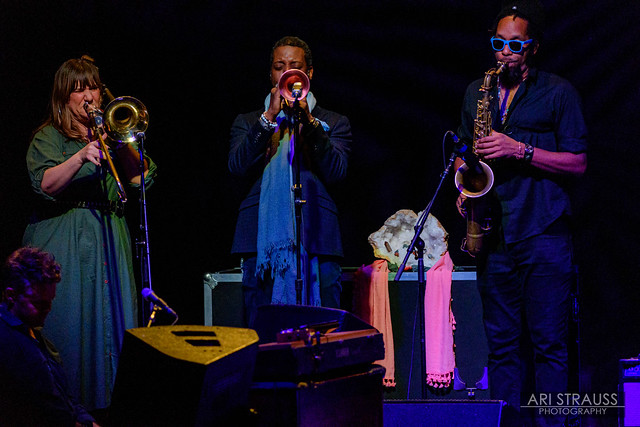 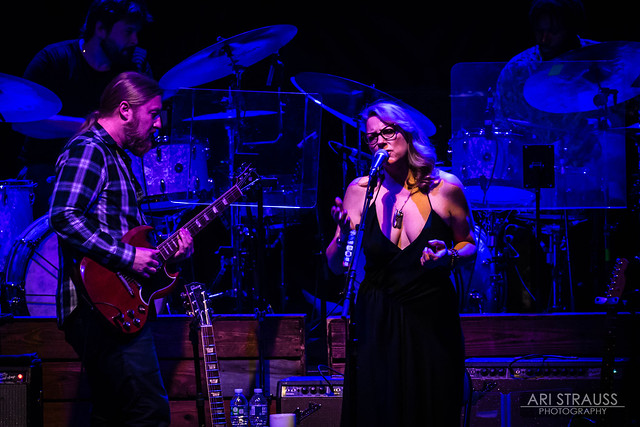 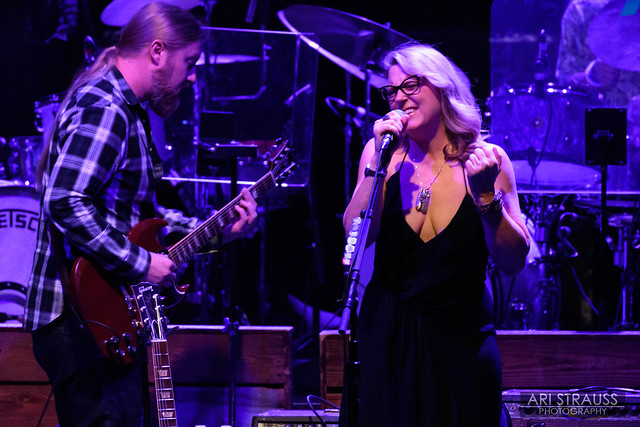 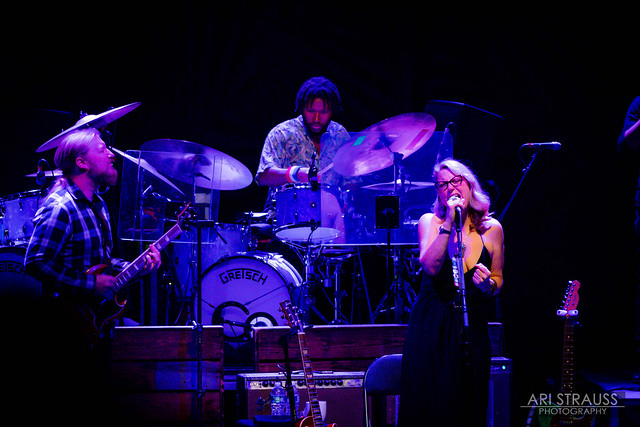 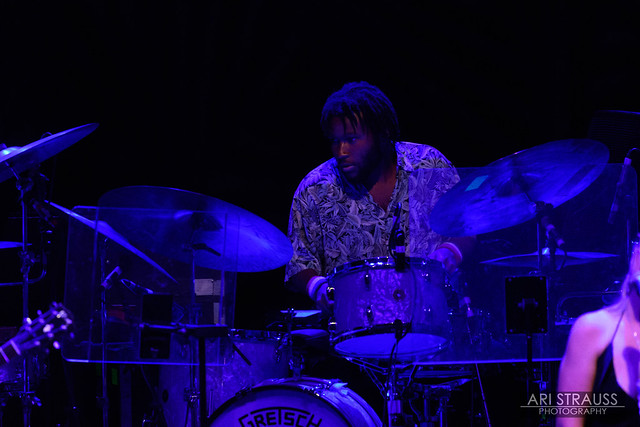 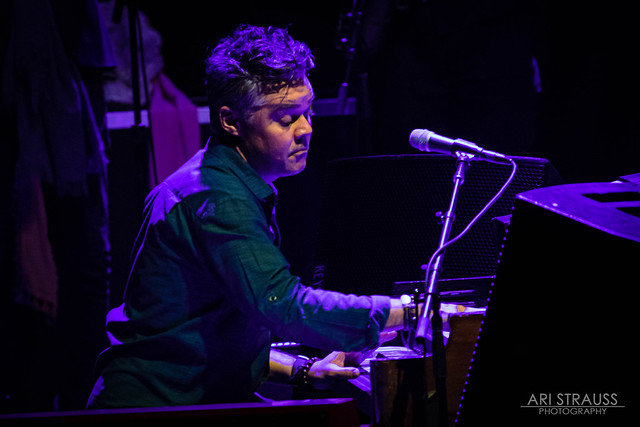 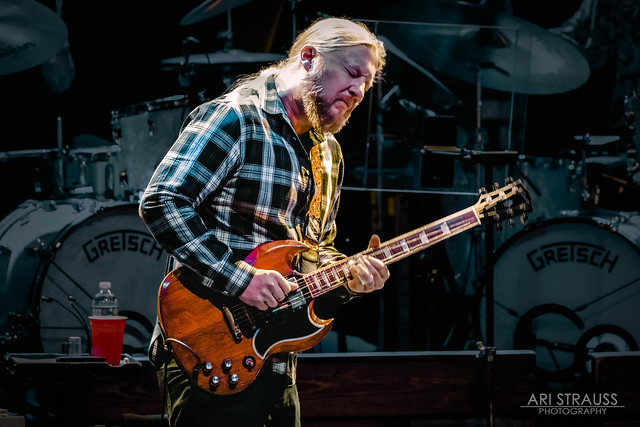 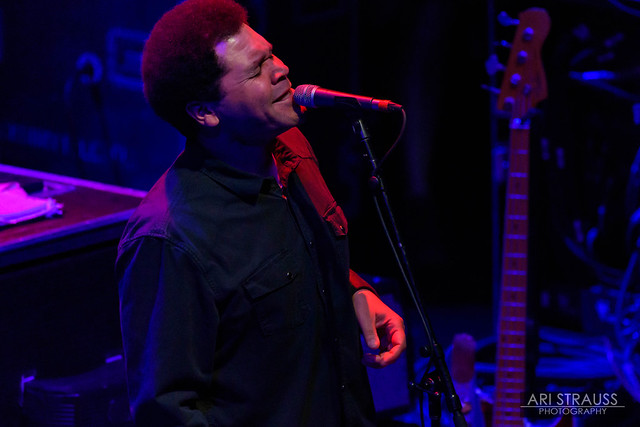 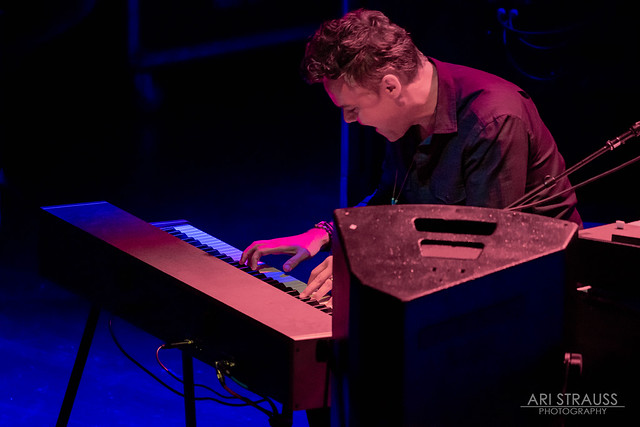 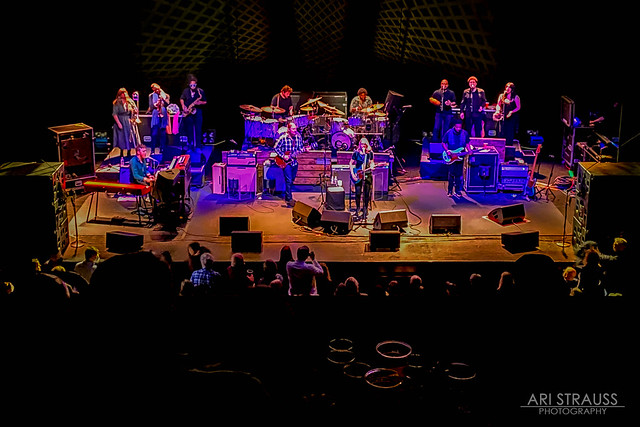 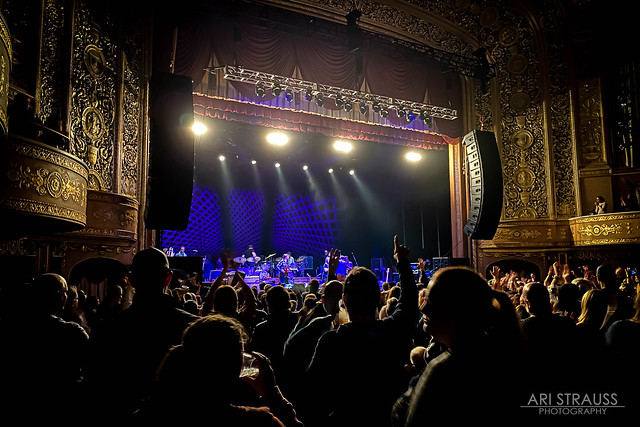 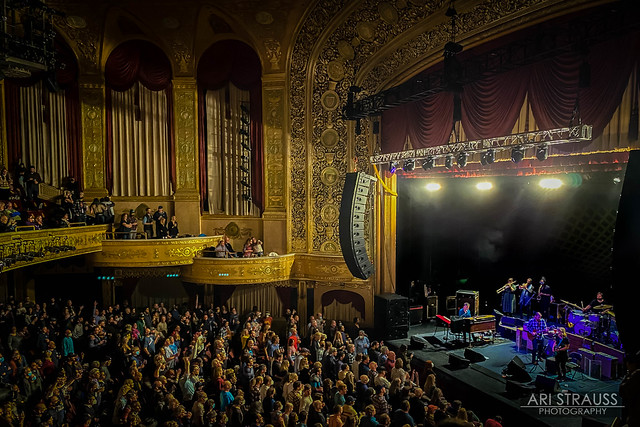