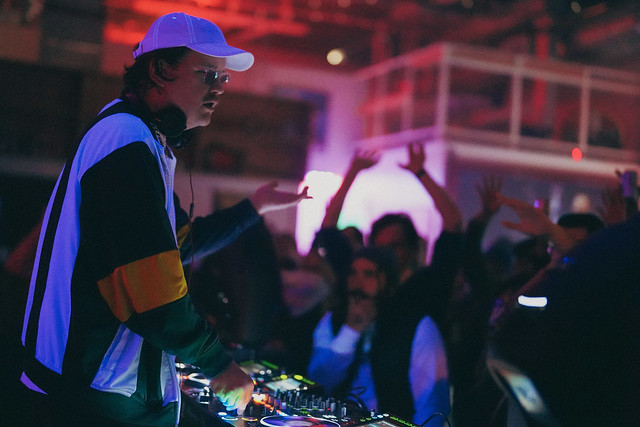 If ever there was a time when America needed to get up off its collective ass and dance, it’s probably now.

And who better to coax us into the groove than one of the most exciting electronic dance artists out of Paris?

A DJ, producer, and sound engineer who hails from Lille in Northern France, Myd is a musician with skyrocketing popularity and an expanding network of collaborators. Myd, who’s actual name is Quentin Lepoutre, began making sound his life alongside three like-minded musicians when the group met while studying the famed La Femis, and they burst onto the scene in 2012 as Club Cheval.

The group — comprised of Myd, Sam Tiba, Canblaster, and Panteros666 — gained early notoriety by way of composing songs that featured the likes of Kanye West and Jesse Boykins III and were included on the rapper Theophilus London’s 2014 albums Vibes. It wasn’t before long that the group’s individual members were moving in different directions as they pursued their solo endeavors and other projects.

Visionary, prolific, and both endeared to and greatly respected by his growing network of associates, Myd had already been making music beyond the work he was putting in with Club Cheval. He forged relationships with DJs, rappers, and producers from all over the map. Eventually, he co-composed music with Alonzo, SCH, Kore, French musicians with massive followings.

And all the while, Quentin stayed busy as a solo artist, working his way to more prominent label affiliations as he released an EP every two years beginning in 2011 with Octodip. With a style said to be influenced by French house music, or “French touch,” and indie rock, Myd’s sound continued to catch the attention of analytical listeners. After releasing his 2015 EP Numero Uno on the Bromance label, that company folded and he would release his next two on the widely regarded Ed Banger Records.

Watch the official music video for Myd’s title track to his 2021 album Born a Loser via his YouTube channel:

Finding himself in the graces of Pedro Winter, who was the longtime manager of Daft Punk before founding Ed Banger, Myd’s popularity has exploded. And it culminated last year with the release of his first full album, Born a Loser, a brilliant party-starter that sees a number of high-profile guests join Lepoutre, including Mac Demarco for the track “Moving Men” and English indie rock musician Bakar, who joins him on “We Found It.”

To support the album, which is being released as a deluxe edition, he’s released several inventive music videos that, like much of his content, has been aggressively consumed by his sprawling fan base — represented by his 3 million-plus current monthly listeners on the Spotify platform.

Currently in the United States for his anticipated opening tour, Myd made the first stop Songbyrd Music House in DC, where on Feb. 17 he led an elating, triumphant set of music that gave an enthusiastic audience a heavy dose not only of his hooking sounds, but also his winsome, affable temperament to provide extra propulsion for everyone to let loose all night long.

Just as the opening set from Virginia-based DJ Stevedreez was winding down, Myd emerged from the stage door, jumped down to the floor, then hopped up on the DJ stand before thanking his supporting act and casually taking over the table centered on the Songbyrd dance floor.

Dancing in place at the gear-smothered table, Myd appetizingly arranged songs from his newest release along with some of his older cuts and a variety of stimulating mixes, including numerous from fellow Ed Banger artists. With the room already in motion from the opening set, Myd stirred the venue space with inexplicable energy and a casual swagger as if he was in his own bubble — so quick to find his own groove on the stand, his arms swinging, feet chugging, eyes adventurous behind a pair of tinted glasses, at times mischievous underneath the usual plain white baseball cap.

Reportedly battling through long, exhausting flight delays to get himself over the pond, Myd showed for two frolicking hours why he’s considered one of the most promising electronic dance musicians today. Through his mastery of and appreciation for rich, nuanced, repetitive sound, Myd reminding his listeners how enjoyable it is to let go and get down. At Songbyrd last Thursday night, he pulled some of the best from Born a Loser, including the sumptuous, thumping favorite “The Sun” — some in the crowd scream-pled to hear it a second time — and a captivating, heavy take on “Together We Stand.”

Other standouts at Songbyrd included the 2020 nit Remix of “Superdiscoteca” — a whirling, glamorous track that slammed and aerodynamically lifted back up to augment its sound over and over again. Not a single human within earshot remained still. Myd did his best to fight off oncoming shots of booze from so many fans happy to be in his presence, but he could only resist so long and a full-blown celebration it did become. He’d eventually let the music play as he got off his stand to embrace fans, pose for selfies and take a breath after a successfully starting a tour he’d originally planned prior to the pandemic.

In an interview published by DJ Life Mag the day of the show, Lepoutre emphasized just how thrilled he was to be in the states, as well as offering insight into his favorite producers/remixers and DJs, his gear and his influences — names like Fatboy Slim, The Prodigy, and Chemical Brothers come up. The cancellation of that tour spawned his YouTube channel morning show, dubbed “CoMyd-19,” but it also put in him a notable determination to return to the States with a burst.

And that was gloriously plain to see for anyone on hand Thursday night, as Myd would immerse himself in the music just as intently as the supporters packed around him. Arms flailed, hips boogied and the sweat drenched just about everyone in the place, as no one could resist the waves of thick, persistent, audacious sounds that he so seamlessly wove together to make every turn wildly satisfying to the ear. Working as hard as any on-stage musician you’ll see, hands turning dials, pushing buttons, all the magic — Myd set the tone for each song with his own playful body language and the authentic fulfillment that could be culled from his every expression.

Watch the official music video for Myd’s track “Together We Stand” via his YouTube channel.

Parklife DC, in attempt to be resourceful, kept the Shazam app handy throughout the night to try to identify different tracks or mixes fused into the set. And that effort itself was fruitful in shining bright the wide-ranging, remarkably rich sounds that Myd is making himself or with other leading-edge artists, or that he’s deciphering and reinterpreting for the good of those who love to dance.

Here are images of Myd leading the party — presented by Nu Androids — at Songbyrd the night of Feb. 17, 2022. All photos copyright and courtesy of Casey Vock. 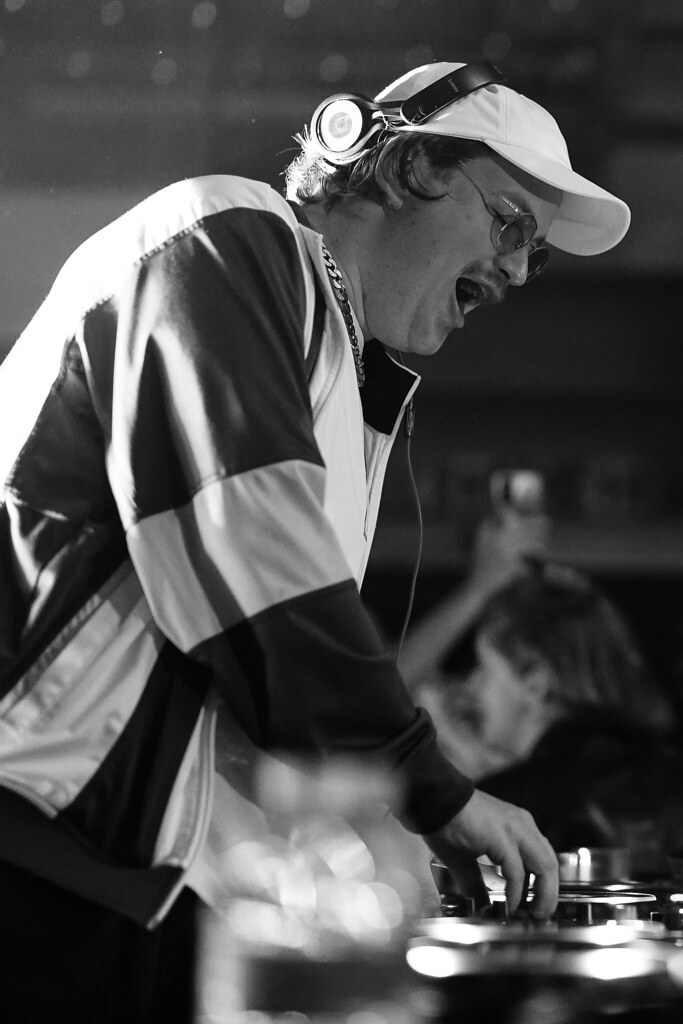 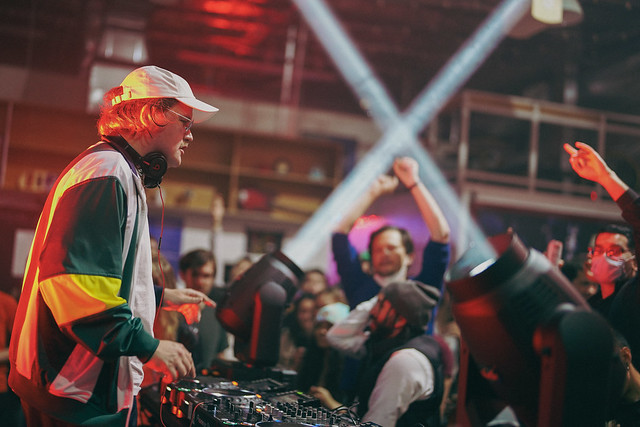 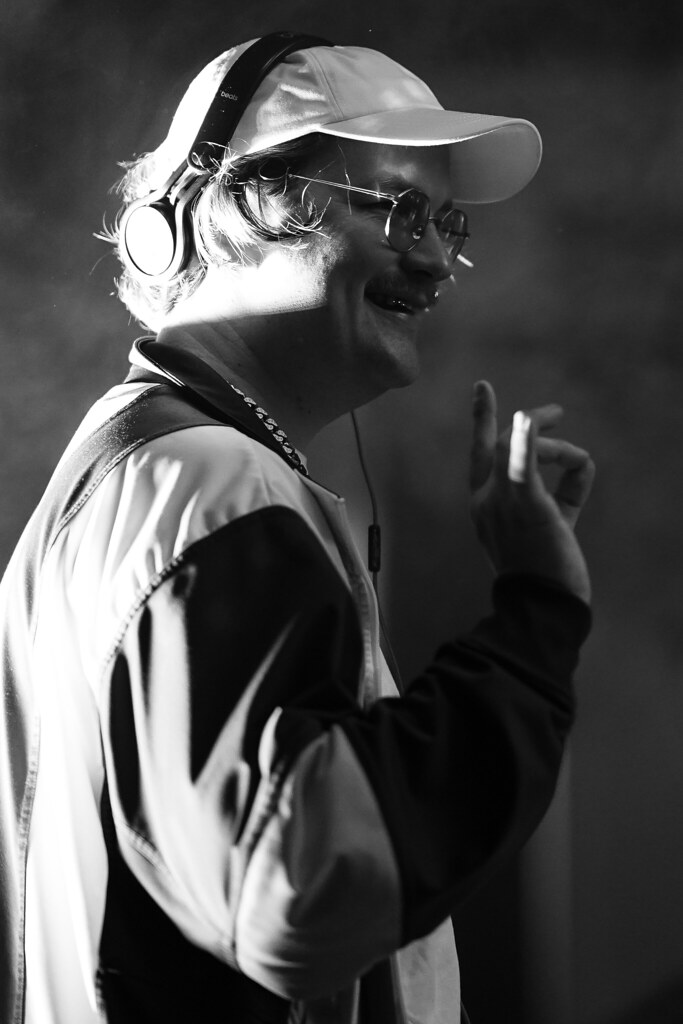 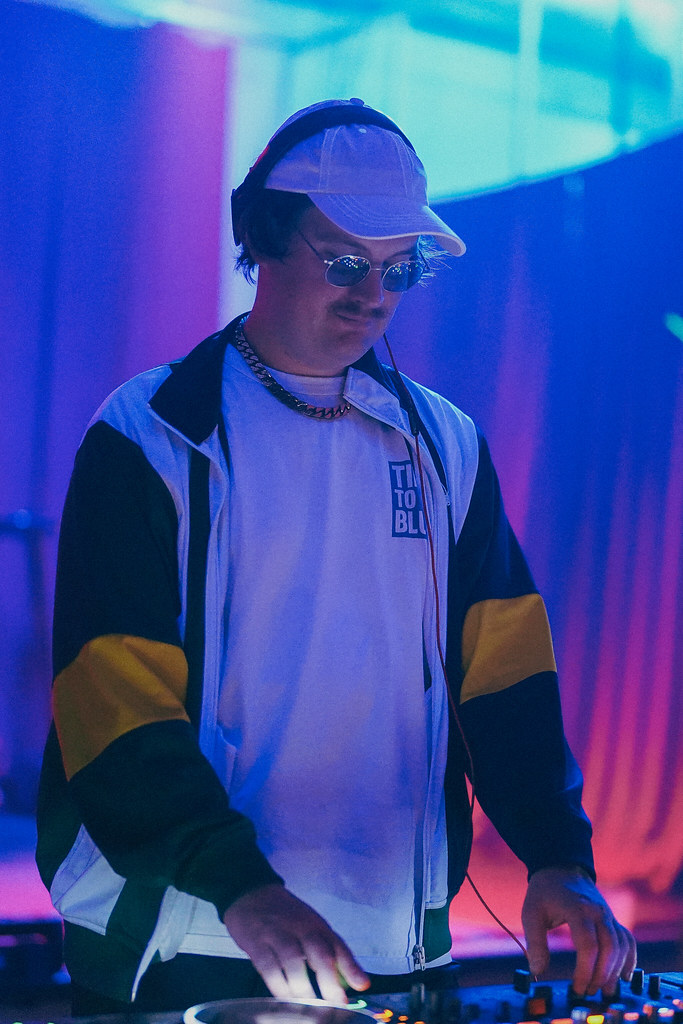 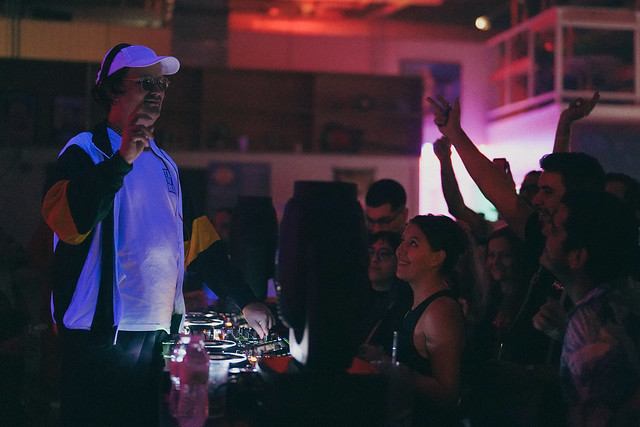 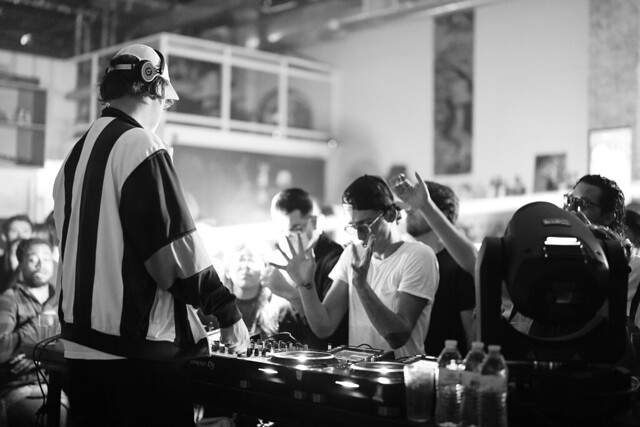 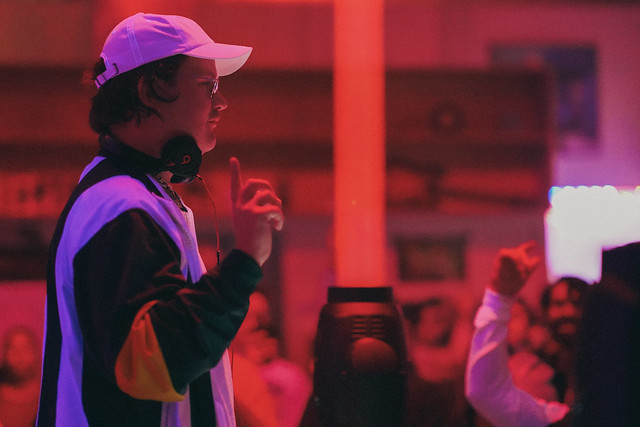 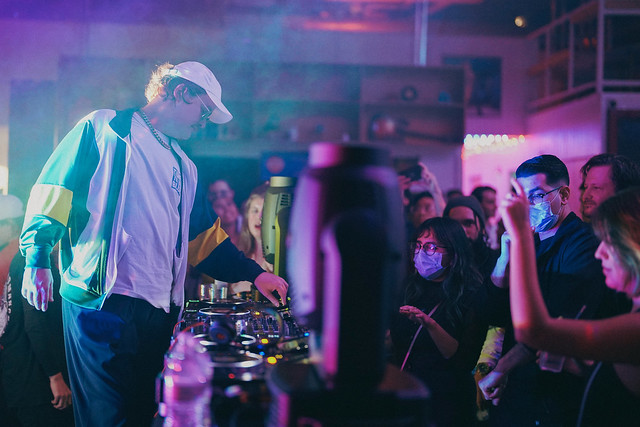 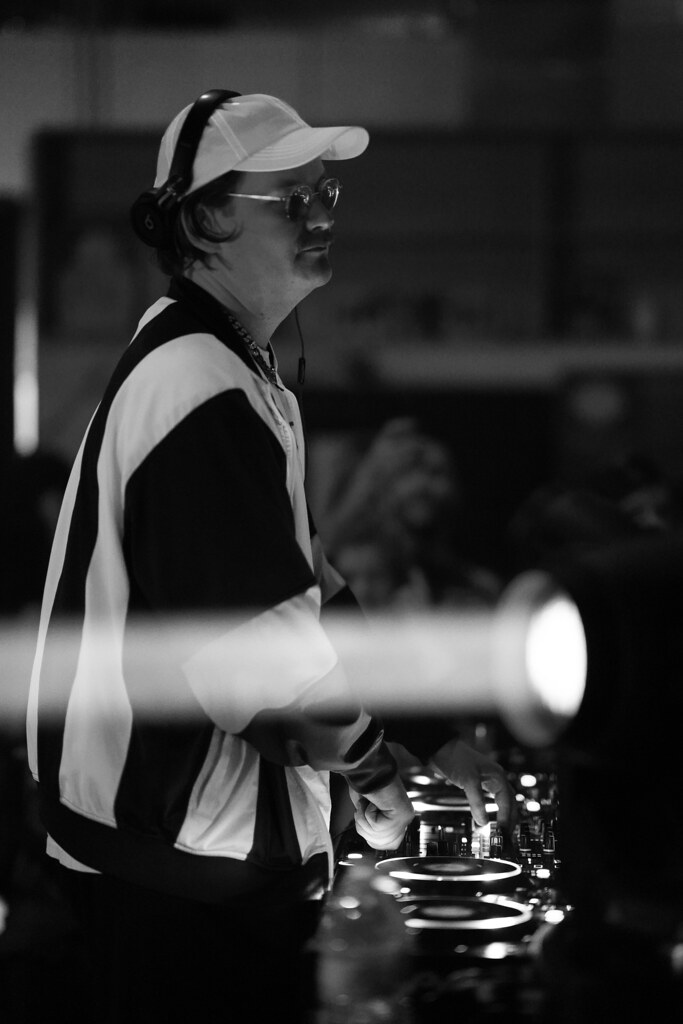 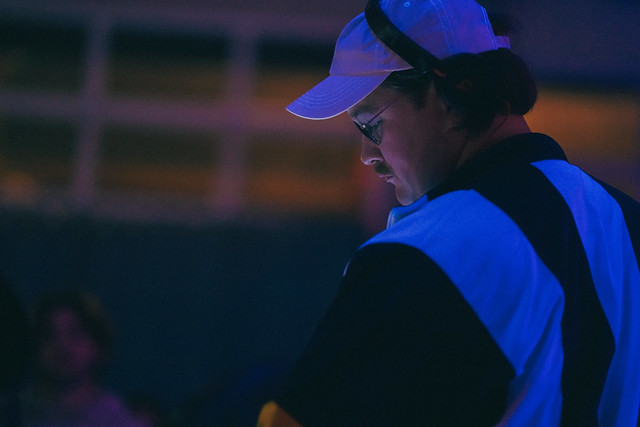 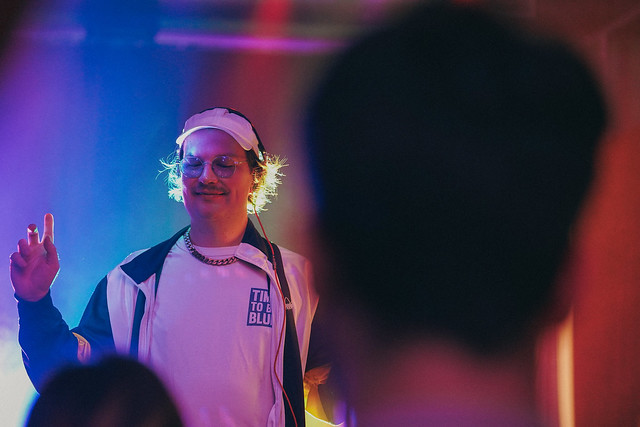 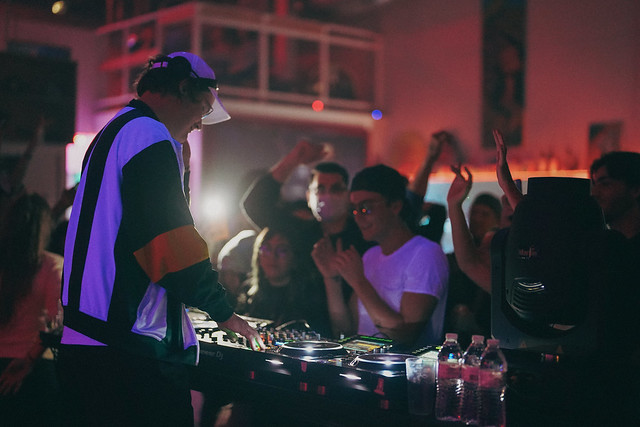 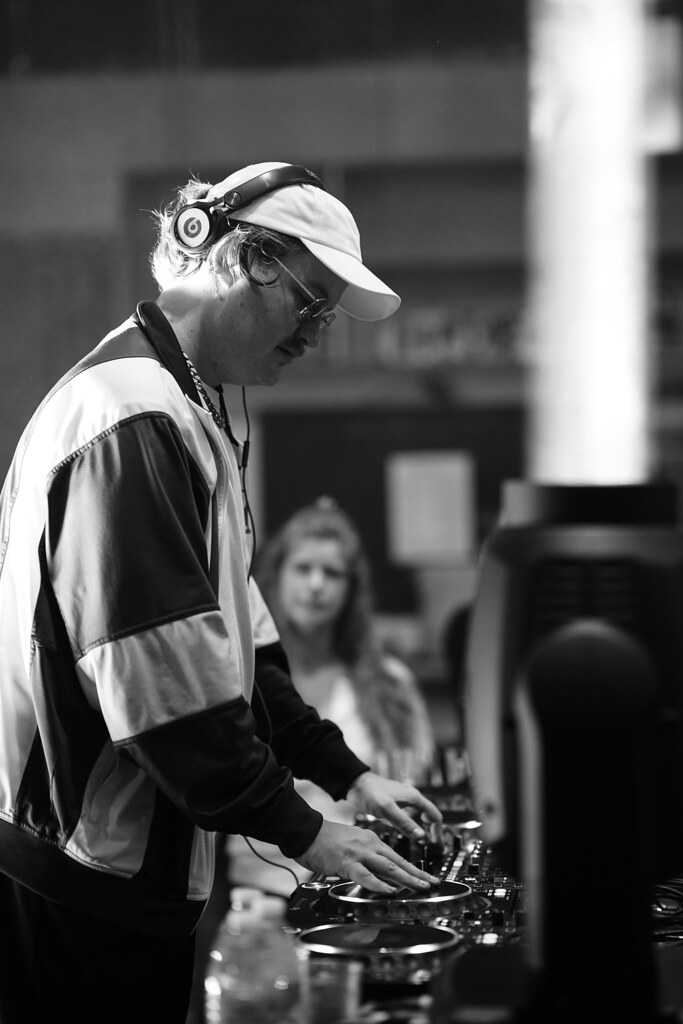 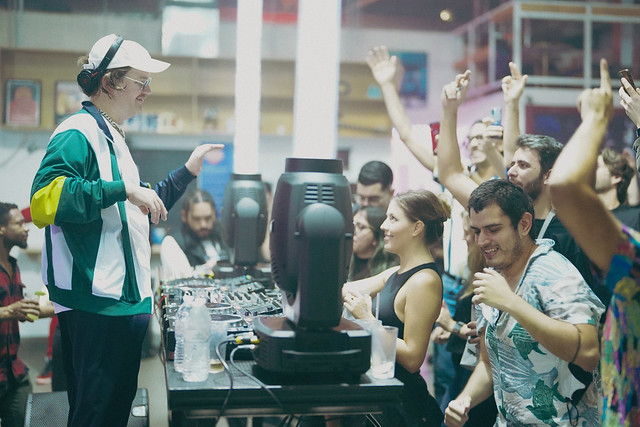 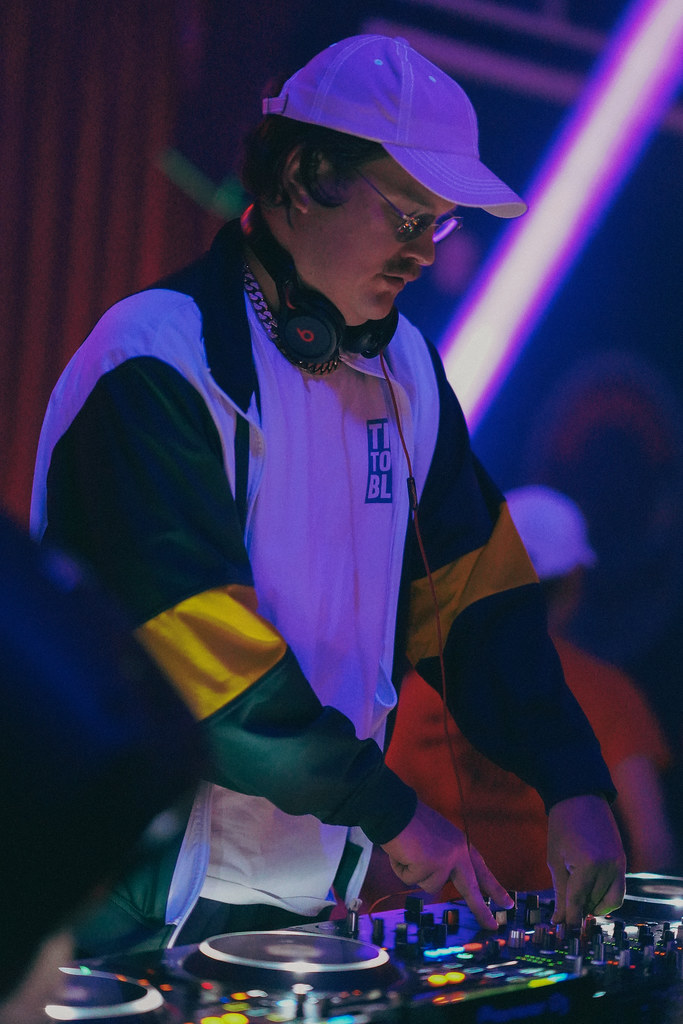 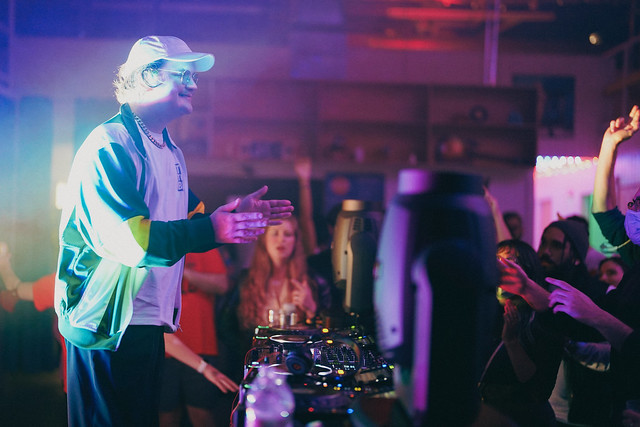 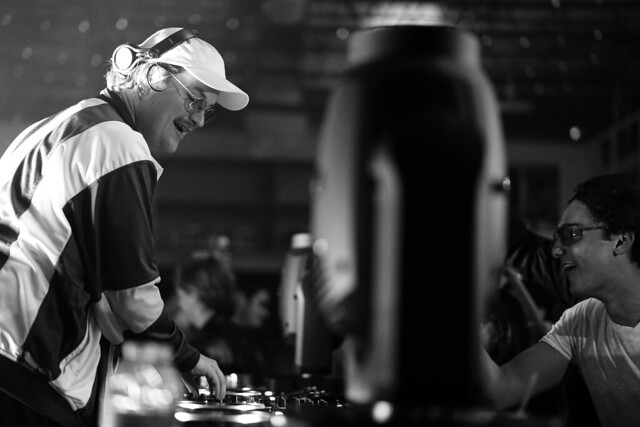 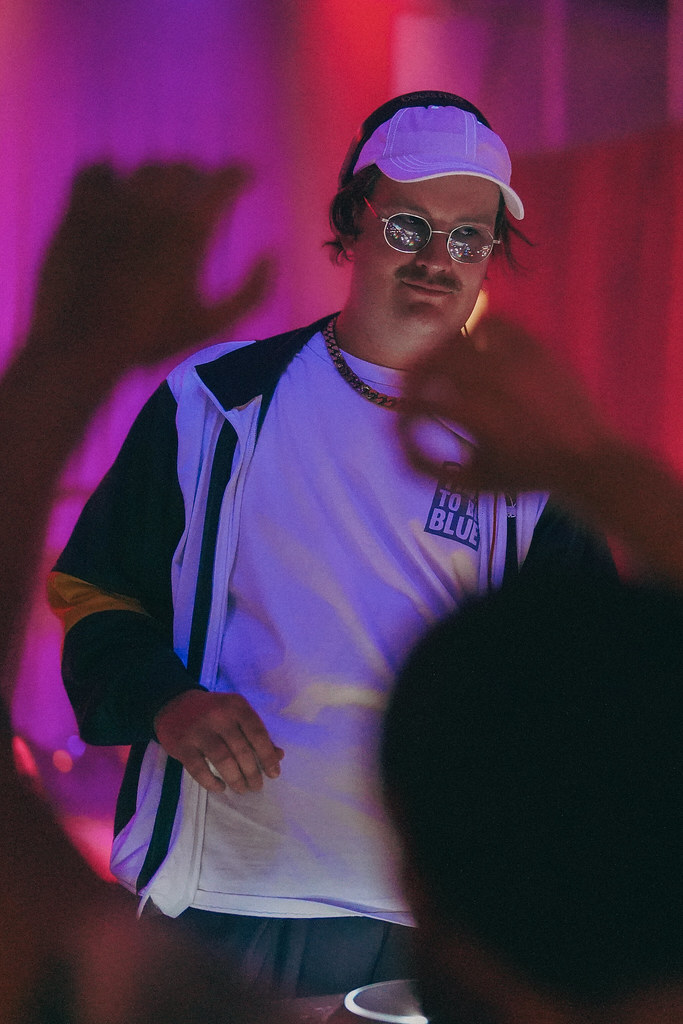 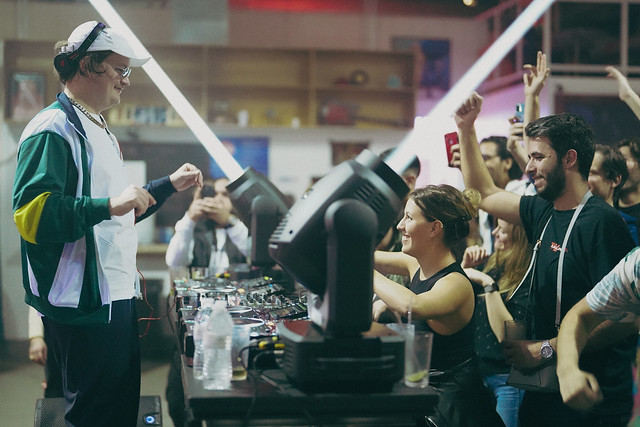 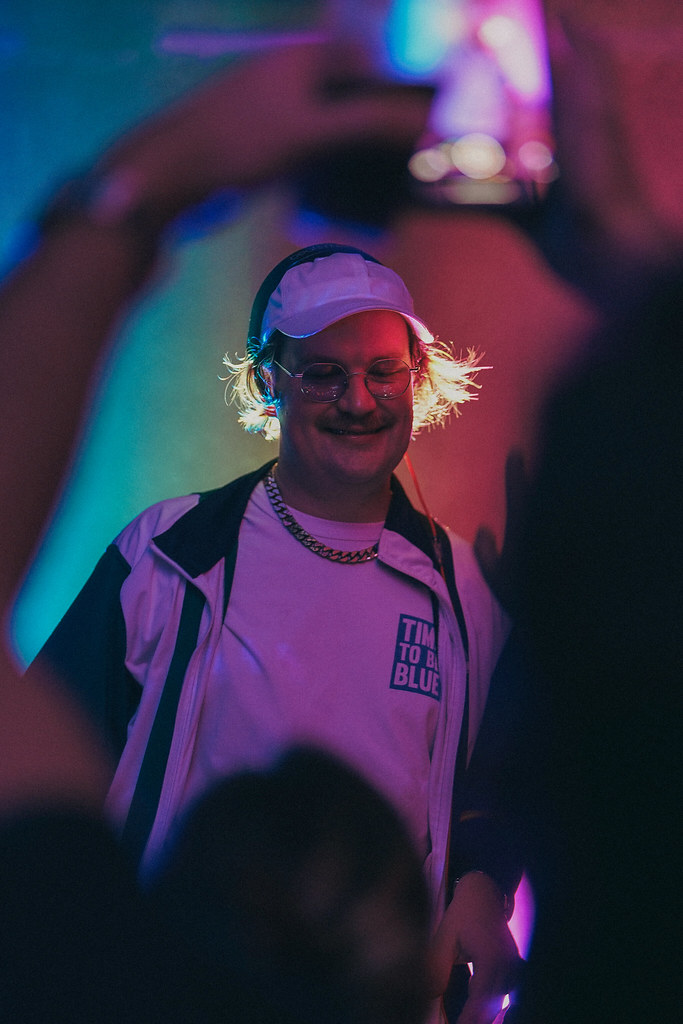 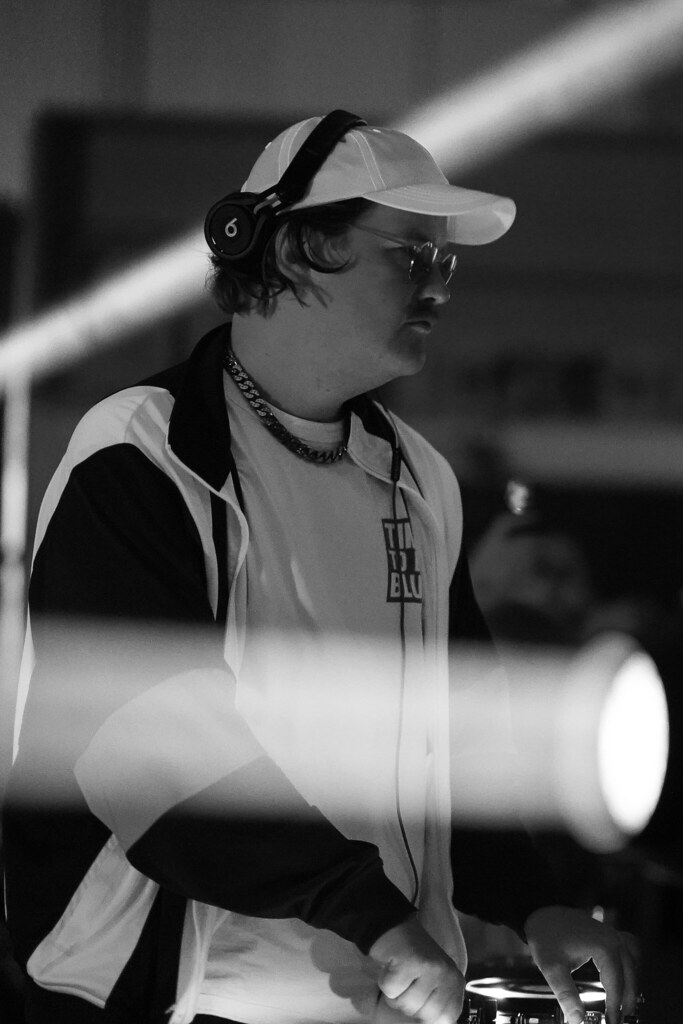 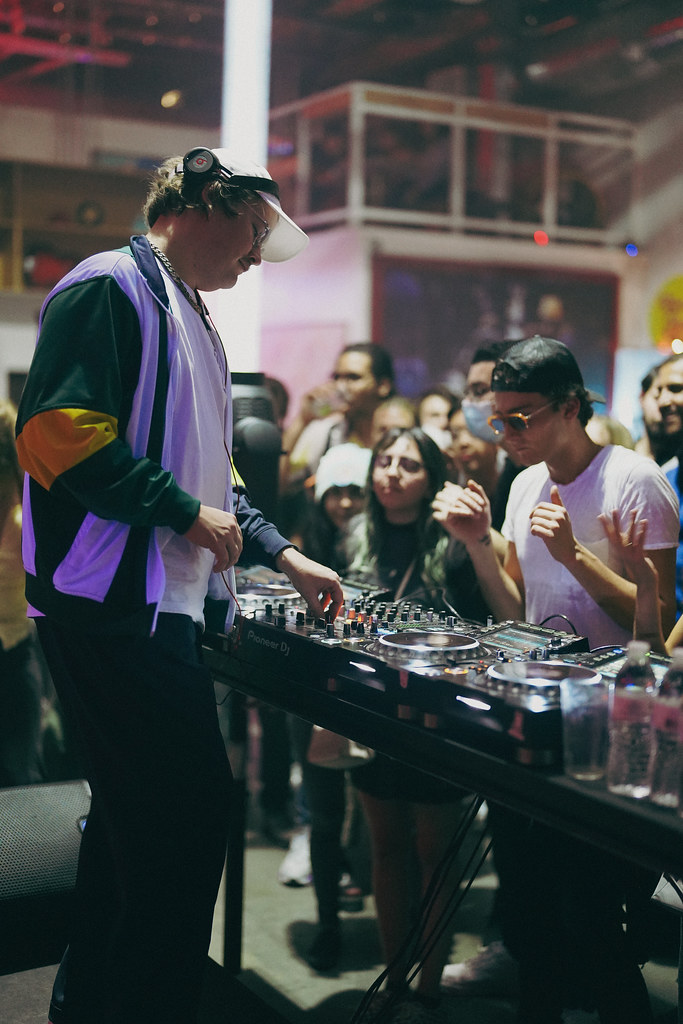 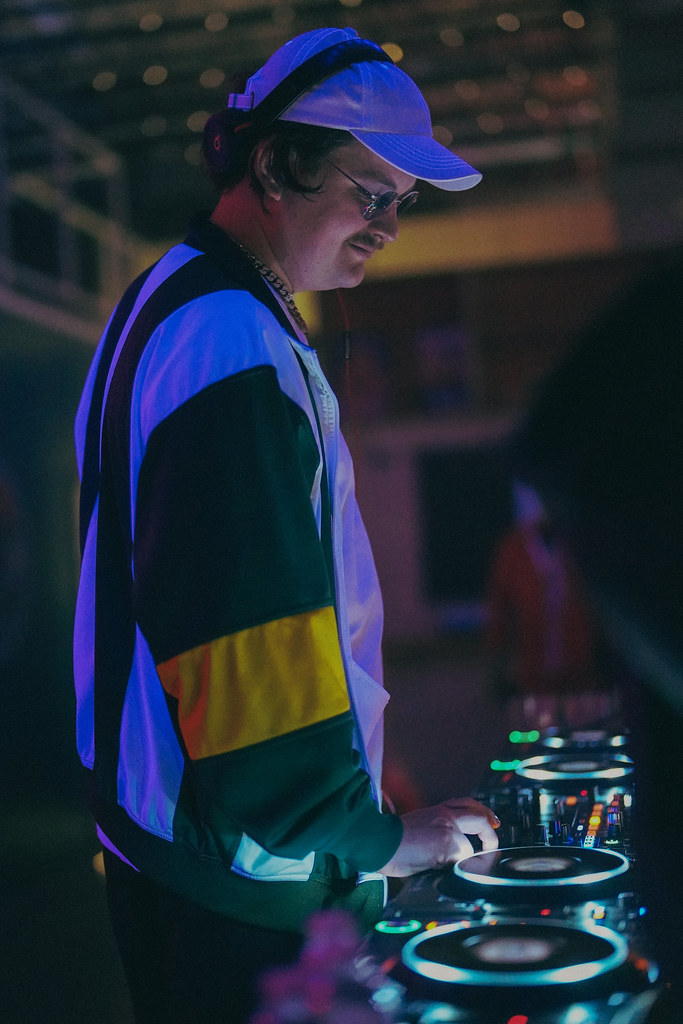 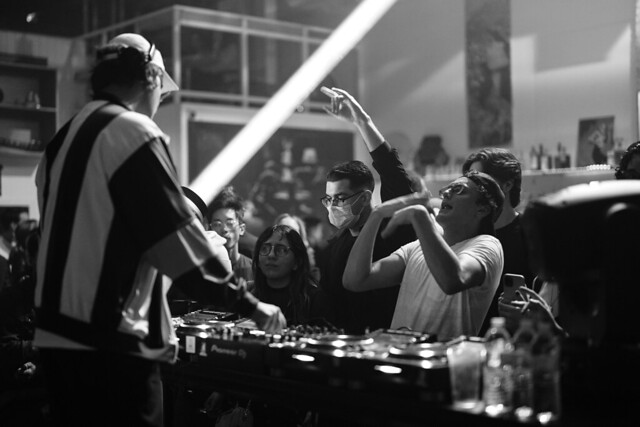