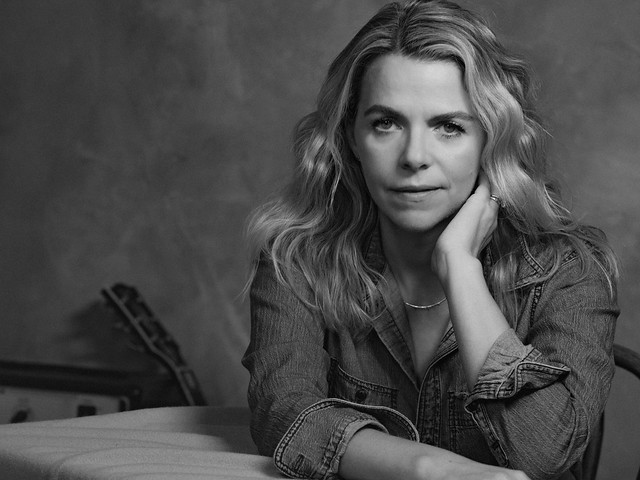 Singer-songwriter Aoife O’Donovan may have achieved her greatest visibility through her collaborative projects: the bluegrass groups Sometimes Why and Crooked Still, and the all-female Americana supergroup I’m With Her (with Sarah Jarosz and Sara Watkins). She’s been making critically acclaimed Americana records and performing as a solo artist for a decade now, however, and she is a compelling artist in her own right, a gifted writer and a talented performer and interpreter with a beautiful voice and a passion for classic folk songs and great songwriters.

Aoife’s recent appearance at The Kennedy Center was therefore must-see viewing for fans of American and folks music.

The Terrace Theater at the Kennedy Center was a perfect setting to catch her set on Feb. 25. It’s a gorgeous, elegant room, and the acoustics and sound system are second to none; if you’re thinking about taking in a show there, I cannot recommend the experience highly enough. The room is large enough that it doesn’t feel small, while still allowing the audience to feel a sense of intimacy with the performer. The kind of music that Aoife plays, which hovers between singer-songwriter and sparse folk-Americana (Aoife played acoustic guitar and was backed by a three-piece unit of guitar, bass, and drums) requires that sense of intimacy and connection for a performance to succeed; I can say without hesitation that Aoife’s show was a success.

Since she last appeared in the area at Wolf Trap in July, O’Donovan has released a new album, her fourth solo release, The Age of Apathy. Joe Henry produced the record, cowriting some of the material, like “Town of Mercy.” She also worked with noted folk and bluegrass musician Tim O’Brien; together, over a period of years, they co-wrote the song “Prodigal Daughter.”

Stream The Age of Apathy by Aoife O’Donovan on Spotify:

The songs, Aoife explained,  were written over the last 23 months, and they cover a diverse range of topics. She opened the set with a couple that addressed nature themes, “Sister Starling” and “Phoenix.” “B-61,” she told the audience, “was written musing over bus rides in Brooklyn,” where she resided, until recently, before relocating to central Florida. (Her husband is a classical music conductor, and he took a position with an orchestra in Orlando.) She added that she rode the DC bus with her daughter earlier in the day.

“Elevators” is “a song about not knowing if the Walmart out the window is the same Walmart [you’ve been seeing].” She added that one of the things she loves about DC is how “you can leave the Kennedy Center and, in 2 miles, you’re in the woods.” (Aoife, as noted in No Depression, is a regular long-distance runner.)

Aoife introduced “What Do You Want From Yourself?” as a question she had been asking herself. (My answer: To venture into the slipstream and return to you with fantastic verbal portraits, that you may bear witness to witness to my words and weep. To be respected by my peers and those for whom I have respect, and the relatable desire to be hated, loathed, and feared in the wicked, hardened, faithless hearts of my enemies. Also, a monster cookie from 7-Eleven.) “Galahad” was inspired by the poem by Alfred Lord Tennyson (check it out, it’s a banger). Other songs from the album included “Lucky Star,” “King of All Birds,” and “Blue Light,” and the set closed with “Passengers.”

Interspersed with the new material, Aoife delivered a handful of old favorites, including the title cut of her second solo release, In The Magic Hour, and “Red and White and Blue and Gold,” from her debut, Fossils. The band took a break late in the set in the set, and she did a solo acoustic performance of the folk song “Lakes of Ponchatrain.”

While Bruce Springsteen’s work doesn’t quite fall into the “Americana” tent, his influence on the genre is indisputable. He’s influenced and is regularly covered by any number of roots music artists, everyone from Amy Helm to Steve Earle to Patty Griffin. About 10 years ago, Aoife performed his album Nebraska, in its entirety, and she did so again for a livestream in May 2020. For her set Friday, she covered “Open All Night” by Springsteen. After she finished, she commented on how the song has “so many words, but there are no words you can skip” and how it is hard to breathe during the song. If it were easy, Springsteen wouldn’t be The Boss, would he?

For the encore, the band was joined by opener Yasmin Williams in performing the title track from the new record. Aoife offered a few words of explanation, saying, “So much seems so hopeless,” and she encouraged everyone to “look around and try to take in the things that make you happy and make it worth it.”

Speaking of Yasmin, this was my second time catching her, and both times she has been great. She as innovative, instrumental acoustic guitarist who is doing really innovative work, playing with a unique style, incorporating elements of African music, and even the influences of video games like Rock Band. One of the innovations she makes is in the in the use of the kalimba, a traditional instrument, which she takes to her guitar. The gaming influence comes through in the her playing lap-style, which allows to perform what she calls “karate chop” moves.

Yasmin has a really engaging stage presence, getting the crowd involved. She doesn’t sing, which can make her songs more mysterious, so she gives some context for the songs, which really helps the listening experience. “I Wonder,” which she composed during the 2018 midterm elections, is about politics “On a Friday Night,” she explained, was written while she was a freshman in college and, while it sounds happy and upbeat, it’s actually about her lack of a social life. (I can totally relate — first year was hard!) In college, she was a theory and composition major, and she had to study cello; from that, she took away the use of the bow, which she employs on her guitar on “Restless Heart.” Yasmin is super talented, and she’s also an area local, so turn out to show your support!

Aoife will be back at the Kennedy Center as part of the all-star tribute Love: A Joni Mitchell Songbook, along with Renee Fleming, Moses Fleming, Lalah Hathaway, and Moses Sumney. and the concert will be led by six-time Grammy winner (and 25-time nominee) Vince Mendoza. It’s sure to be a fantastic show, and you can catch in on May 25 or 26.

Read more about Love: A Joni Mitchell Songbook on The Kennedy Center’s website.