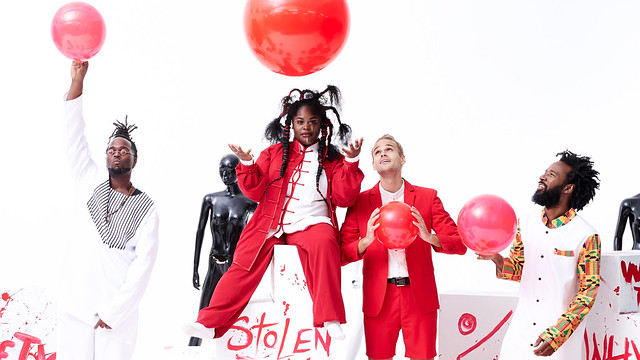 Tank and the Bangas (Photo by Jeremy Tauriac)

New Orleands funk collective Tank and the Bangas are set to release their third studio album, Red Balloon, on May 13 via Verve Forecast. They have already launched a North American tour that will bring them to 9:30 Club on Monday, March 21.

Of the new music, frontwoman and lead vocalist Tarriona “Tank” Ball says, “‘Stolen Fruit’ is basically about the slave trade. There’s ‘Strange Fruit,’ and I call this one ‘Stolen Fruit,’ because not only were the fruit strange, but they were also stolen. They weren’t from here.”

Watch the official music video for “Stolen Fruit” by Tank and the Bangas on YouTube:

Red Balloon was born out of a pandemic-ordered break from the band’s rigorous touring schedule. The hiatus gave the band space to breathe and double down on who they are as artists, allowing them to reunite as a more unified group. The new work has evolved and pushes the band to a new level, shedding light on their unique observations and songwriting reflecting on the ills of America while also celebrating the beauty of Black life.

In addition, the band have embarked on an extensive run of 2022 tour dates with Big Freedia, Trombone Shorty, and Cory Henry. Catch them at 9:30 Club on March 21 with Cory Henry!