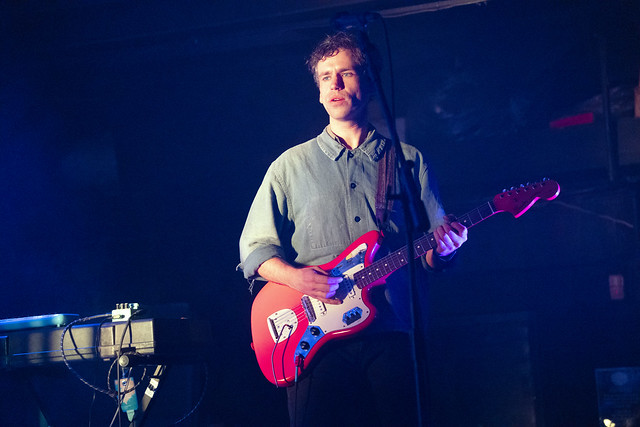 Colored lights strobed across Parquet Courts as they performed at 9:30 Club recently, and the effect was akin to an artist splashing paints across a canvas, allowing subjects to emerge from pastoral hues rather than appear fully formed from the outset.

The lighting suited the Brooklyn quartet, who have become increasingly psychedelic with their new album Sympathy for Life, released last fall via Rough Trade, in an effort to capture the essence of late-night dance clubs and perhaps also the sense of solitary souls coming together within a city’s communal space.

Parquet Courts opened their set at 9:30 Club on April 4 with “Application/Apparatus” from the new album, 100 percent setting the mood for the show. Multi-instrumental wizard Austin Brown hovered over an impressive electronic bank of synthesizers and sequencers at stage right, looking like a slightly crazed musical alchemist as his hands tuned knobs to generate some glorious fuzz. Andrew Savage, his fellow frontman, stood to stage left and delivered the lyrics of “Application/Apparatus” in a monotone that would have pleased Lou Reed.

All the while, purple or yellow spotlights swirled around the band. Bassist Sean Yeaton stood smack in the middle of the stage, banging his head to the band’s driving beats while drummer Max Savage droned away behind him. The beat dropped about halfway through the song, and Andrew tripped along in an increasingly singsong manner, dashing through the words as Sean became more frenetic. Austin kneeled to create more fuzz. The lights rippled around them, and Andrew barked the final lyrics.

It was glorious, transporting, and affecting. If somehow you entered the sold-out 9:30 Club not knowing that Parquet Courts were an urban band, you would immediately peg them as one as only someone who thrives in the city environment could capture the quiet frenzy of municipal streets so effectively.

Watch the official music video for “Application/ Apparatus” by Parquet Courts on YouTube:

Well, I for one was immediately hooked. But then Parquet Courts threw the audience into a different kind of solitary state with a surprise early performance of the title track to their 2016 album Human Performance. This incredibly melodic and emotional tune played like a Western theme song where the gunslinger faces off with himself, leaving his opponent to carry a self-inflicted wound that will pain him until the end of his days. As breakup songs go, I have never heard one that more eloquently captures the feeling of loneliness and regret echoed in “Human Performance,” and Andrew’s plaintive rendering of the song live made it all that much more powerful.

Sticking with the excellent Human Performance, Parquet Courts also played “Dust” from that album, lightening the mood a little bit but more importantly demonstrating how the foursome really come together in service of a memorable and rhythmic number. This particular performance of “Dust” received an extended psychedelic treatment rooted in Parquet Courts’ new temperament, and it really suited the song.

As much as I love that fifth studio album by Parquet Courts, their seventh and most recent truly took the spotlight, particularly as the band played its splendid “Marathon of Anger.” The band wrote the song during the Black Lives Matter protests during the summer of 2020 in New York City. The song’s thick, hazy guitar struck me as flavored by ’60s psychedelia augmented by the urgency of modern protest music. Soon, Austin took lead vocals for “Sympathy for Life,” the title track, and they immediately got funkier, squishier, and brighter. Thematically, the songs remained connected through a sense of responding to people around you and owning your space rather than tuning out and closing yourself off.

Watch the official music video for “Sympathy for Life” by Parquet Courts on YouTube:

Parquet Courts later kept the excellent energy high with the new album’s “Walking at a Downtown Pace,” which synchronized the movements of the four players on the stage as one groovy whole. Andrew and Austin attacked the song with twin guitar power and the band gained extra percussive punch with the addition of a second drummer on stage. Notably, Austin and Sean seam visibly shaggier in appearance for this tour, eliciting thoughts of a life of burning the candle at both ends — where perhaps they have immersed themselves in the nightlife culture that inspired many of the new songs only to awaken and hit the road hard. The Savage brothers, by contrast, appeared as trim and neatly groomed as ever. But by the time they play “Walking at a Downtown Pace,” they have merged entirely into one visual continuum of Parquet Courts.

To the delight of the crowd, Parquet Courts’ breakthrough album Light Up Gold dominated the last half of the show as the Brooklynites showcased four songs from it, tossing yet another selection from the record onto the pile as the show spiked toward the end. The punchy buoyancy of “Borrowed Time” in the final few numbers particularly recalled the band’s traditional taste for vivid, jaunty guitar licks. The straightforward and rapid clip of the song served as a fantastic mental break, where the crowd lost itself in a polite, carefree version of slam dancing in place.

Parquet Courts have paused touring for a bit, but they resume with a sweep of the US West Coast at the end of the month, and then they move on to conquer Europe in May. The gents are in excellent form, still bursting with plenty of social commentary and wry observations on human existence. You assuredly want to be part of it and live as one of the solitary souls in their crowded human cityscape.

Here are some pictures of Parquet Courts performing at 9:30 Club on Monday, April 4. All photos copyright Parklife DC. 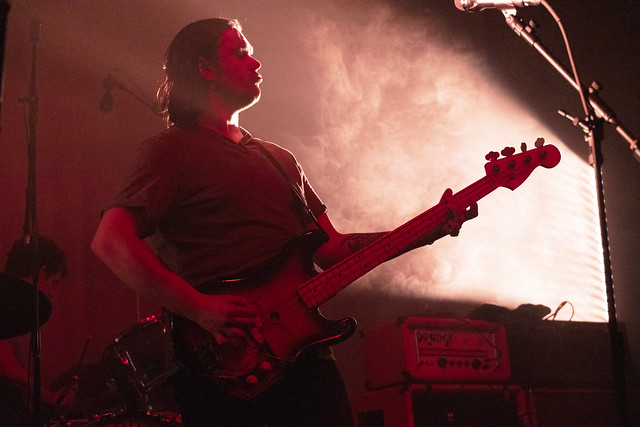 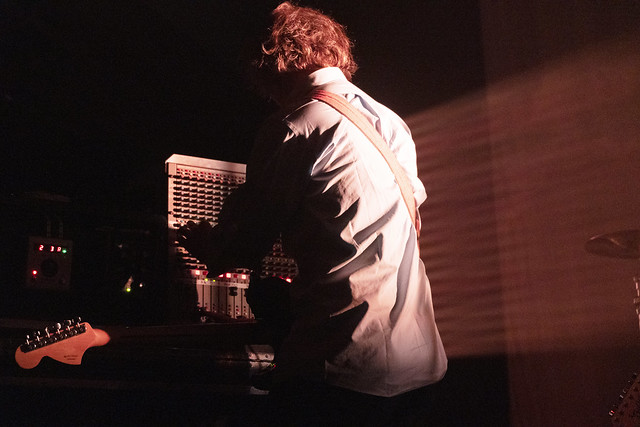 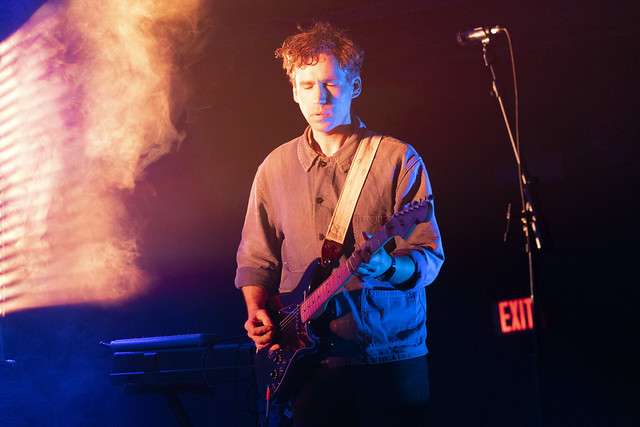 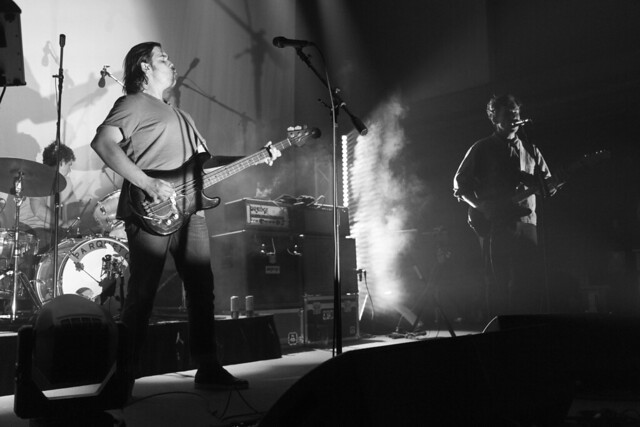 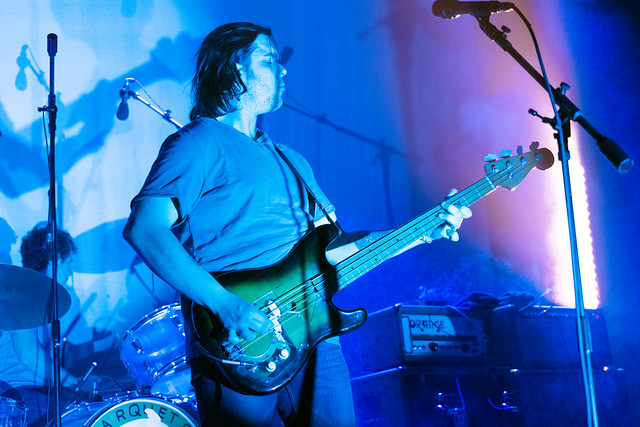 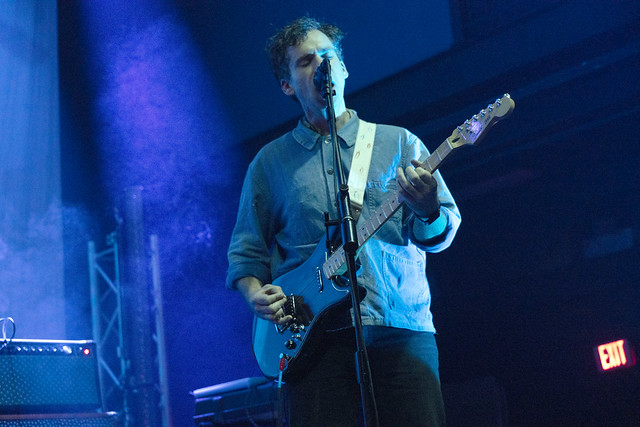 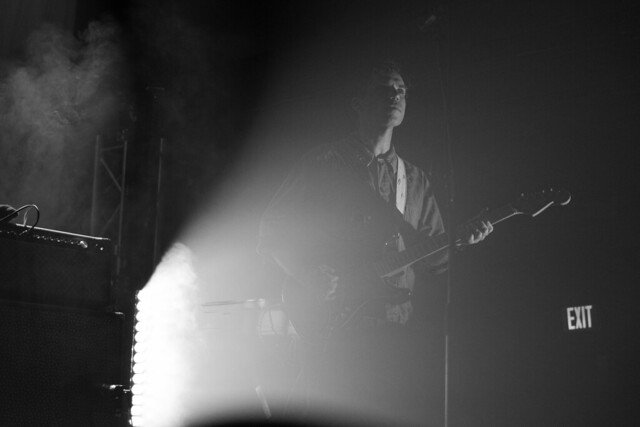 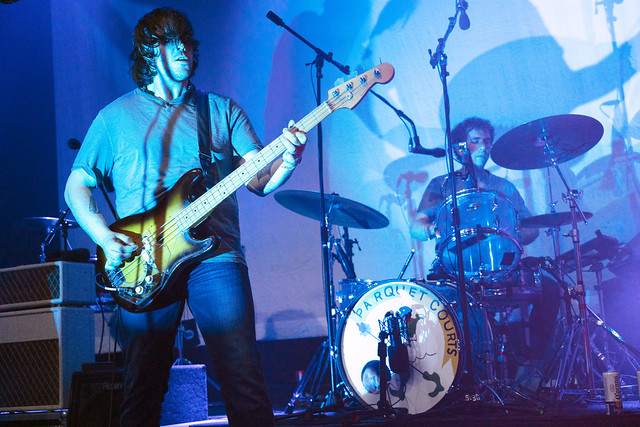 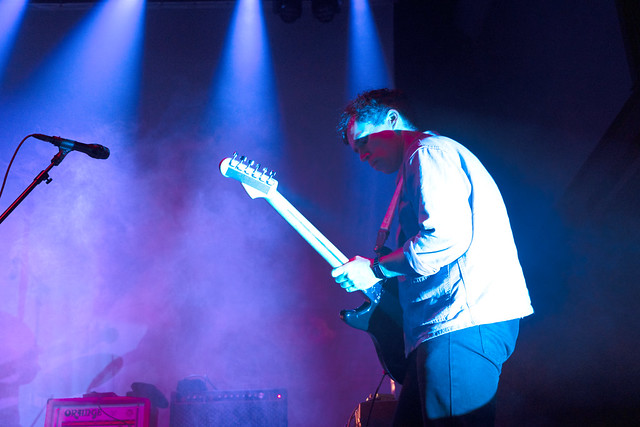 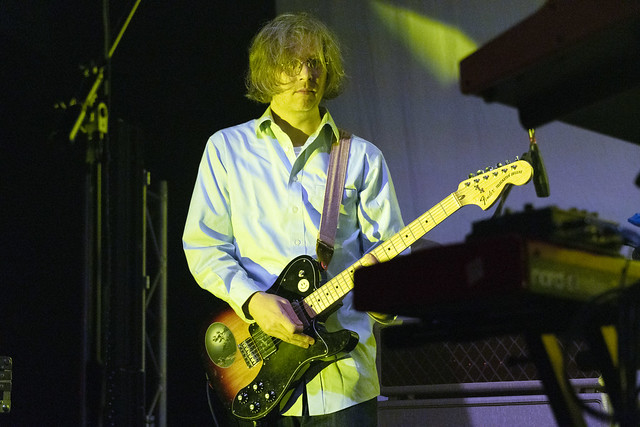 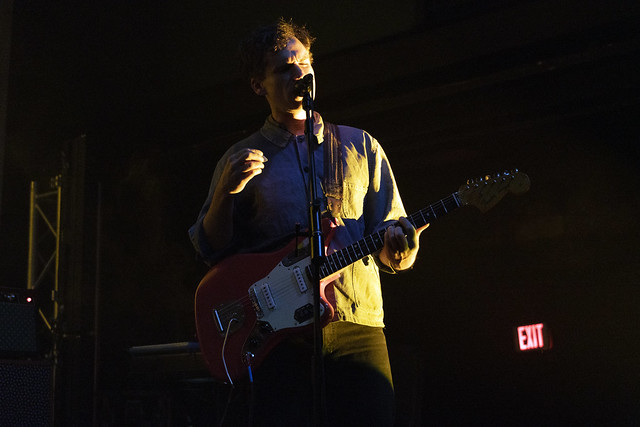 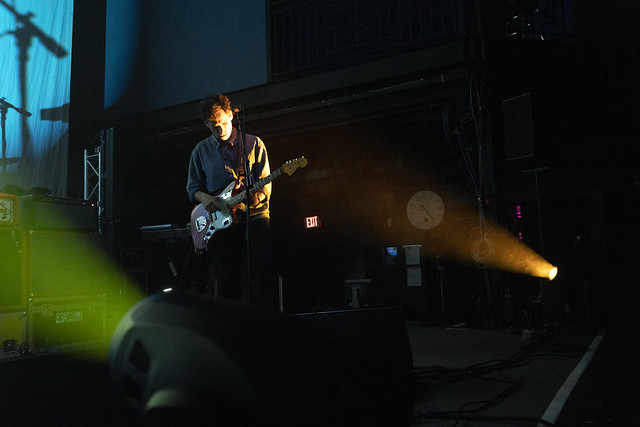 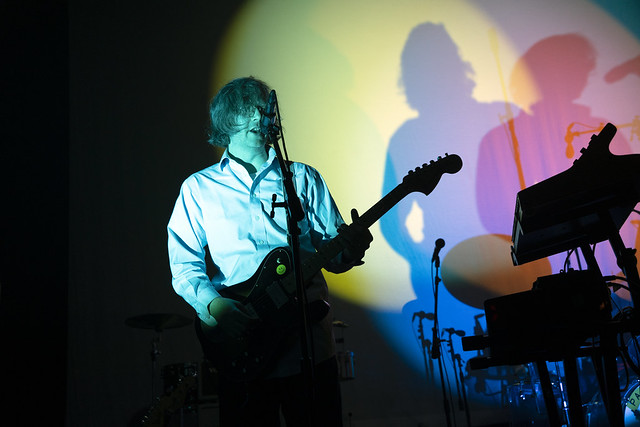 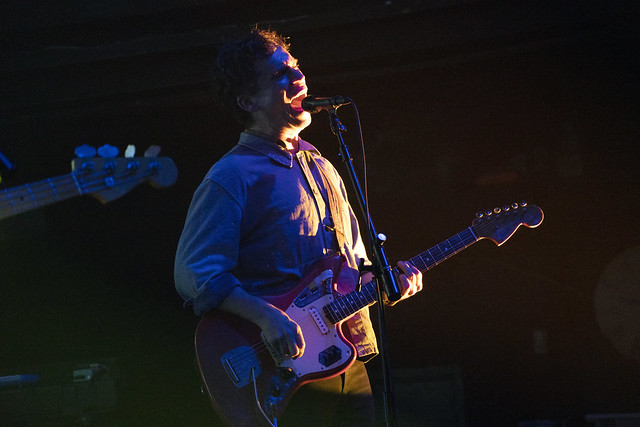 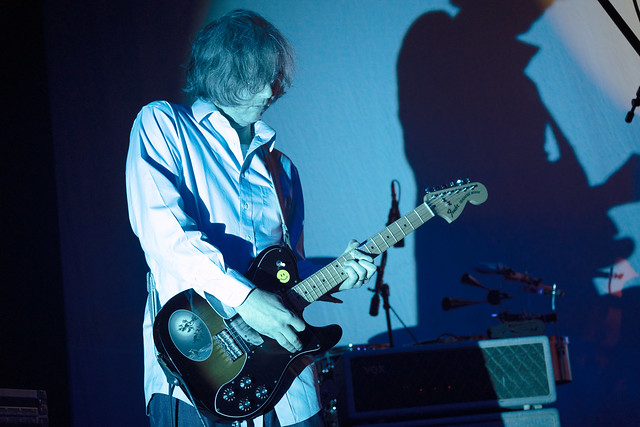 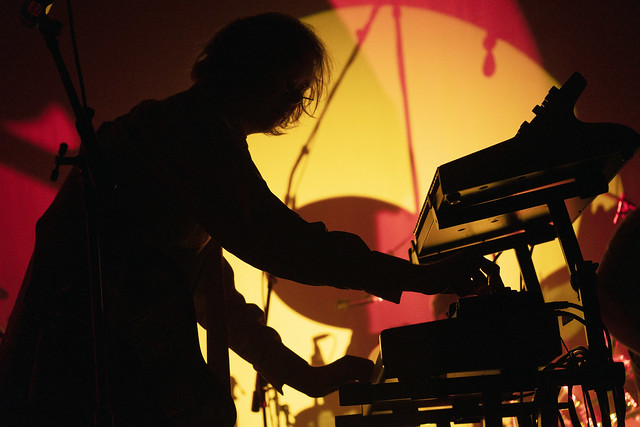 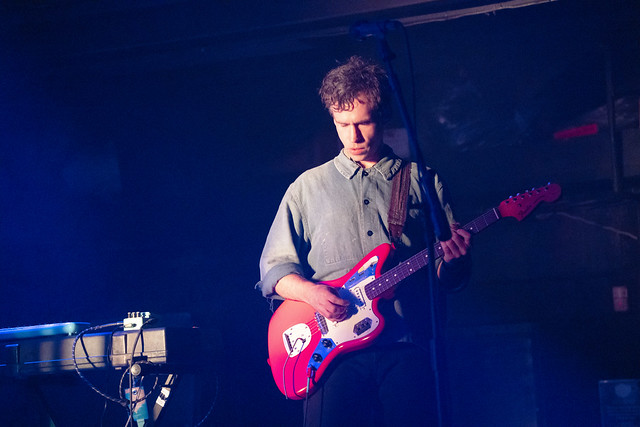 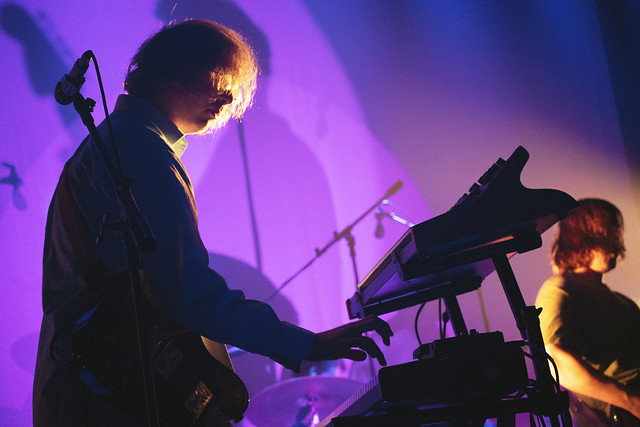 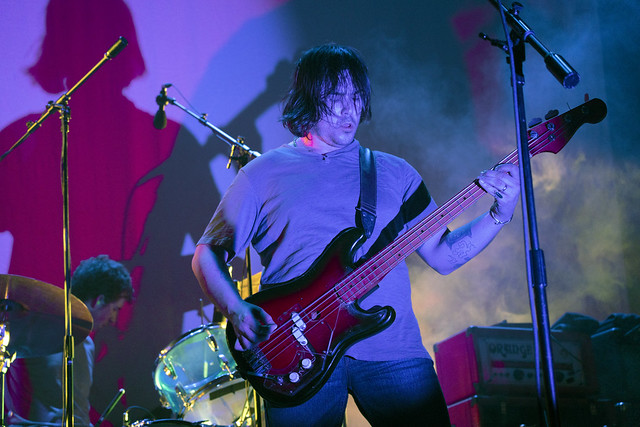 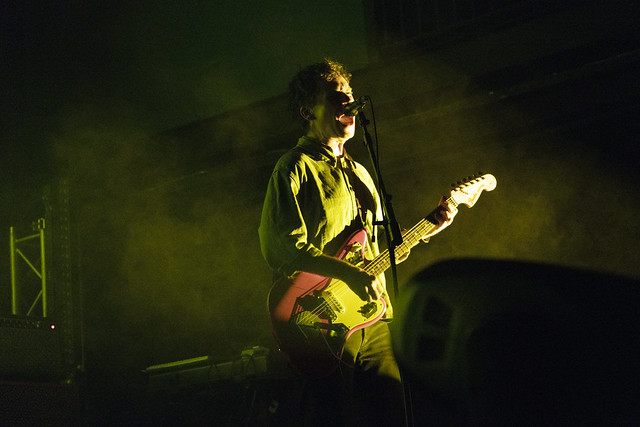