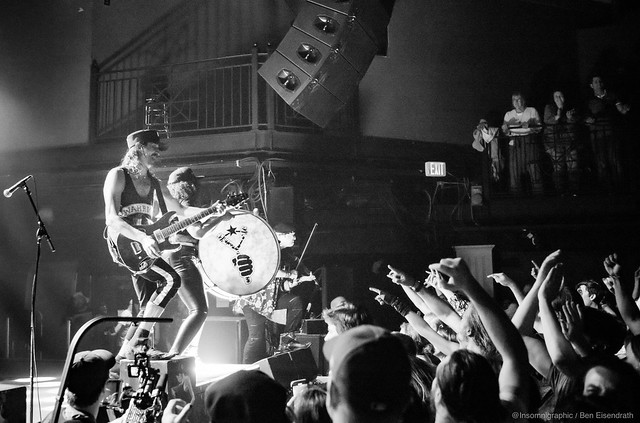 Gogol Bordello performs at 9:30 Club on May 7, 2022. (Photo by Ben Eisendrath/ Instagram: @insomnigraphic)

This is not your babushka’s polka.

In normal times, when you’re about to catch an infamously party-centric, rambunctious act of the likes of Gogol Bordello, your headspace is filled with thoughts of dancing, drinking, and living life to the fullest. You’re not necessarily worried about the geopolitical machinations that insidiously weave its way into the fabric of everyday existence; indeed, performance art is often a means of escape from those quotidien worries.

But, as we are all too well aware, these are not normal times. Strolling up to the venerable 9:30 Club on a cold, wet night in May, I was surreptitiously conscious of the significance of this concert.

Ukrainian-born Eugene Hütz and his band Gogol Bordello, who have not shied away from criticizing Russia’s invasion of a sovereign nation, are playing DC for the first time since Vladimir Putin unleashed the latest wave of militaristic terror on  the Ukranian people: a full-scale war on their country. How does a crowd-pleasing performer such as Hütz reconcile his art and livelihood to the intimate hurt that he faces every day?

From my vantage point, it seemed to come to him in the most natural and positive way possible. While the backdrop — a blue-and-yellow fist on top of a hardcore logo showing support to Kyiv — didn’t leave much to the imagination, the band’s energetic performance highlighted a remarkably indifferent defiance at 9:30 Club on May 7. “So what, Putin?” their set seemed to say…”we’re here as we always have been, and your atrocious actions don’t change that.”

True to lore bestowed upon the Manhattan-based gypsy punk band, these rad motherfuckers came out to shock and awe. Dressed and groomed in what can only be described as a hipster’s wet dream (i.e. striped capris, trucker hat, unkempt shoulder-length hair, and a handlebar mustache to die for), frontman Hütz sang, strummed, strobed, shimmied, and generally ShamWow’d the shit out of us.

His familiar gruff, hard-worked melodies led the vanguard through a collection of tunes the crowd so obviously knew, and responded to. Rounding out the line-up were two drummers (with one, Ecuadorian Pedro Erazo, also taking on emcee duties), a back-up singer, bass, guitar, and the legendary, Russian-born Sergey Ryabtsev on electronic violin. With the second longest tenure in the band, behind only Hütz, and the prominent role that violin has in their melodic make-up, Ryabtsev is a core component to Gogol Bordello. His raw talent and commanding stage presence, in my opinion, puts the perma-smiling, rascal-y Rusky in the same tier of player as Warren Ellis (of Nick Cave & The Bad Seeds’ fame).

The boisterous troubadours’ live performance tonight certainly lived up to its storied reputation of gorgeously weaved, unfiltered folly. Their songs mostly build off traditional folk and polka rhythms and scales, while adopting a modern grittiness and aggressiveness found in today’s hard rock and punk acts. Anchored by a tight, pulsing rhythm section (remember…2 drummers!), the songs lean heavily into melodic hooks provided by Ryabtsev’s violin runs and Hütz’s impressive vocal cords (which, after over two decades of constant touring, must be torn to shreds by now).

The band’s material lends itself perfectly to a live setting, featuring a great deal of sing-along chorus chants, melodic improvisation and long rhythmic breaks. Although tempos were all over the place from song to song, the band speeding up or slowing down on the drop of a (trucker) hat, each tune shared consistently fluid rhythmic and harmonic characteristics.  When Gogol broke into fan favorites like “Wanderlust King” and “Immigrant Punk”, the crowd went ballistic. And their execution of “Alcohol,” in this form an 8+ minute meandering sing-along featuring an elongated drum break and jarring tempo changes, was a goddam master class in how to modernize polka.

Check out Gogol Bordello’s “Alcohol” off their 2007 album Super Taranta! on YouTube:

And the stage presence. My god, Gogol Bordello’s stage presence! The interplay between the band, and energetic antics performed masterfully by every single member as they goaded the crowd, resulted in a sea of bobbing, sweaty, slovenly human beings. The mosh pit was wide reaching and lively, consisting mostly of bouncing and flowing with a side of light shoving; although the pit did descend into more aggressive, two-step territory during Gogol’s faster and weightier songs like “Immigraniada”. Frontman Hütz deftly orchestrated the entire performance, effortlessly flowing from song to song, roaming the stage, and engaging with the crowd all through the night.

Now, despite the focus on pulling off an electric performance, that’s not to say that Gogol Bordello didn’t do everything in their power to maximize their support and contribution to the ongoing plight in Ukraine…a big portion of proceeds from this Solidaratine tour are going to Ukraine’s battle for democracy, and will end up directly with human rights organizations providing relief to the war-ravaged country. The performance also often lingered into more somber reflections and calls to action. And, in fact, one of the loudest moments of the set came as a reaction to a crowd-surfer proudly draped in Ukraine’s flag.

And so, as I walked back to my car quietly humming a medley of catchy-ass Gogol Bordello tunes, I was somewhat surprised to realize that the night had indeed been as much a referendum on what’s going on in Ukraine as it was a gypsy punk party. That loveable maniac Eugene Hütz managed to pull it off, perfectly! It was a powerful experience, and it struck me that a man so strongly inspired by Roma culture, one who has spent so many years writing and singing about the nomad lifestyle, suddenly found himself defending his home country. The crisis in Ukraine has certainly given Gogol Bordello new purpose, and through their grassroots efforts, I do believe they are living up to the moment.

Oh, Vladimir Putin? I know you’re not a huge fan of free press, but if by chance you are reading this…Пу́тин — хуйло́!

Here some photos of Gogol Bordello performing at 9:30 Club on May 7, 2022. All pictures copyright and courtesy of Ben Eisendrath/ Instagram: @insomnigraphic. 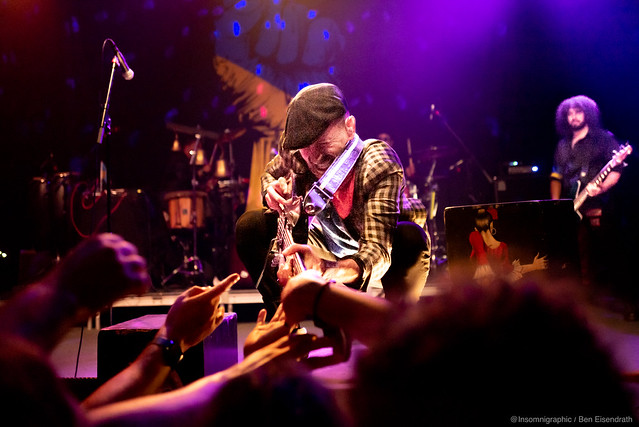 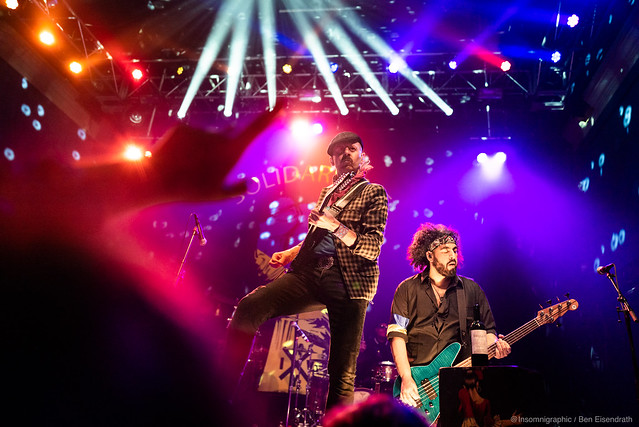 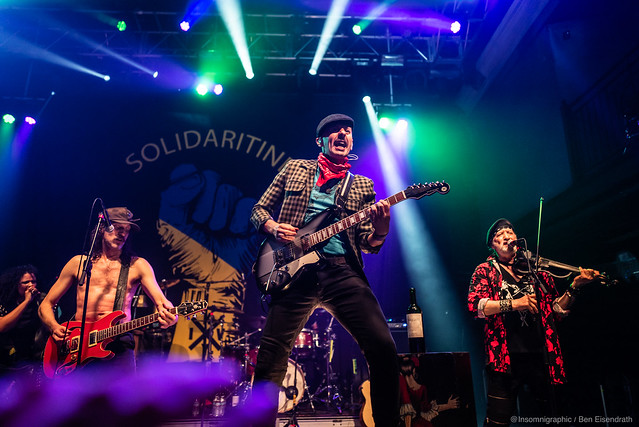 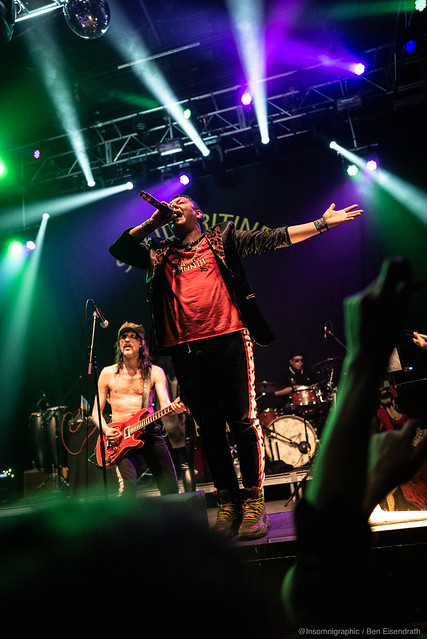 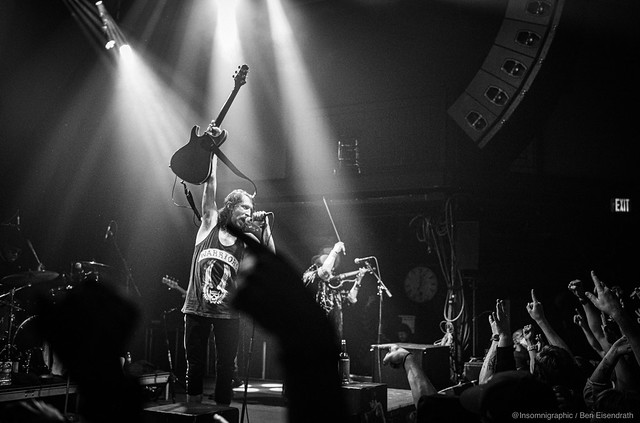 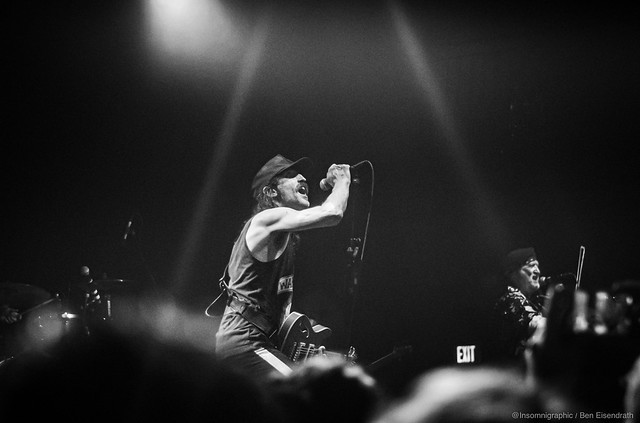 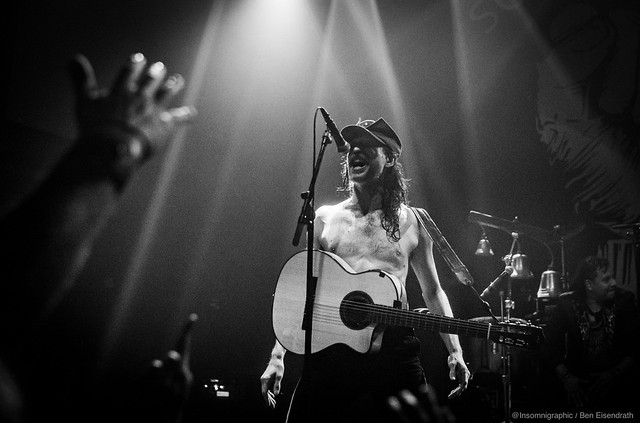 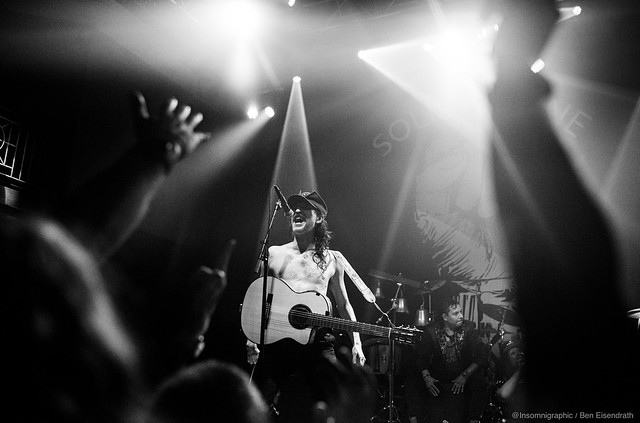 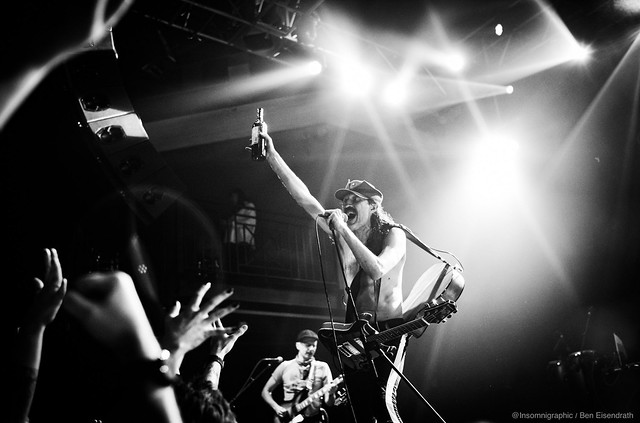 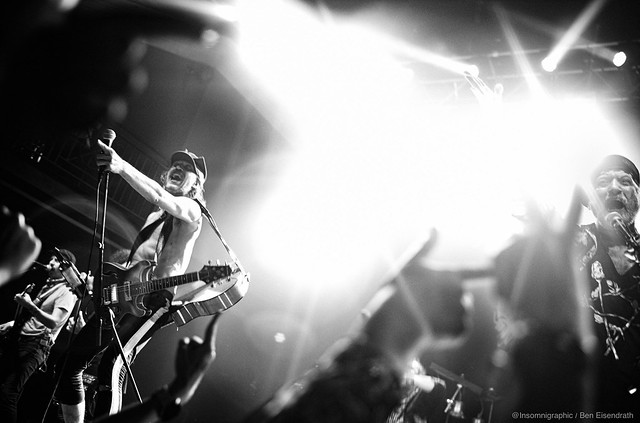 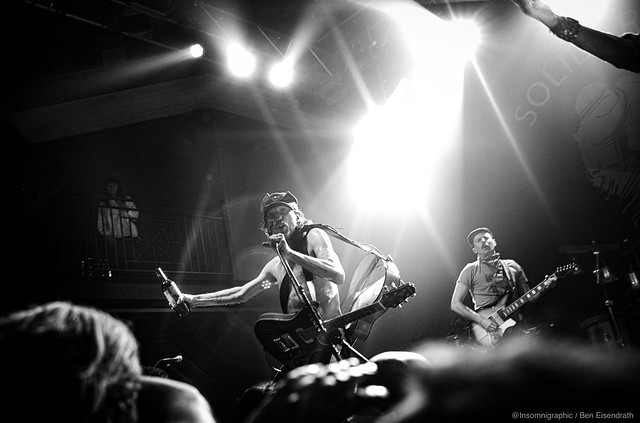 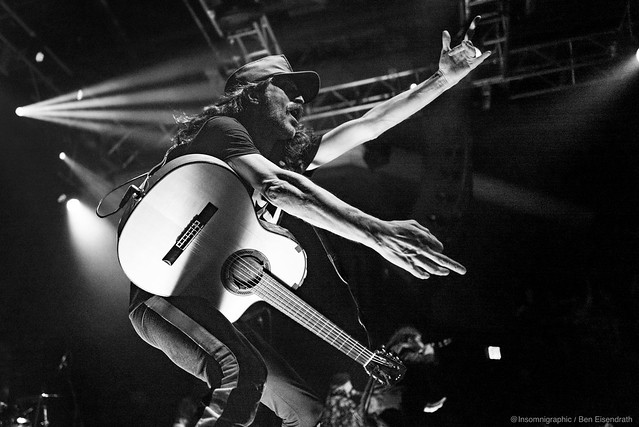 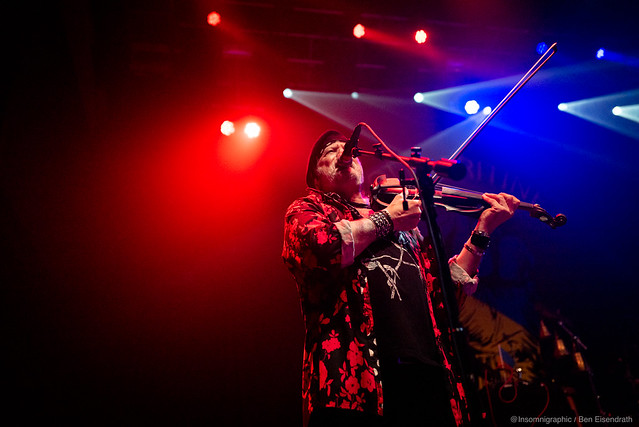 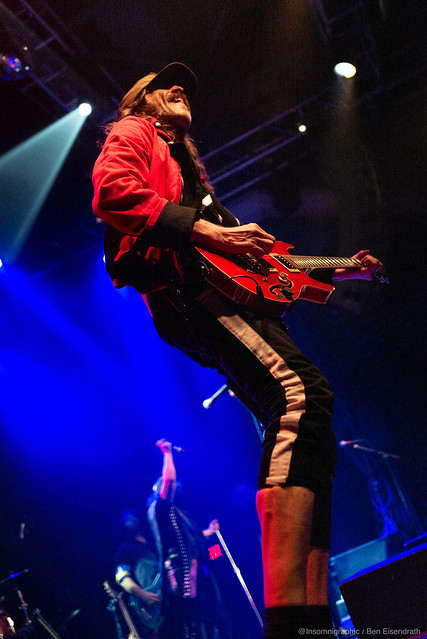 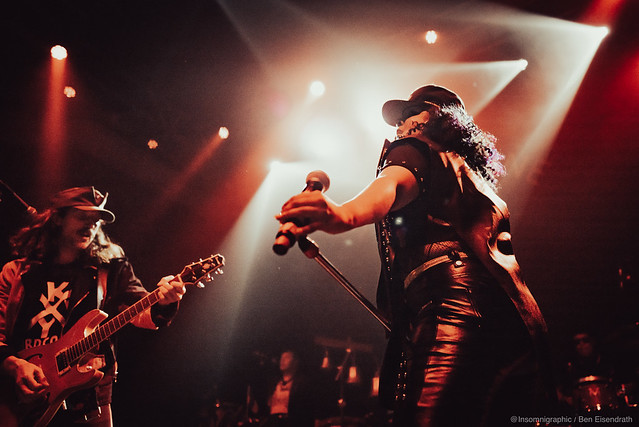 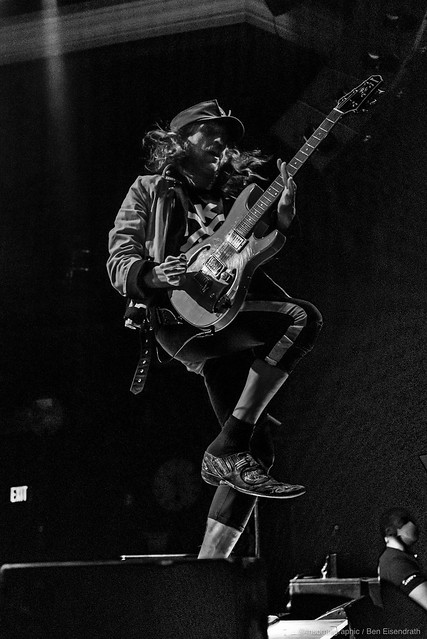 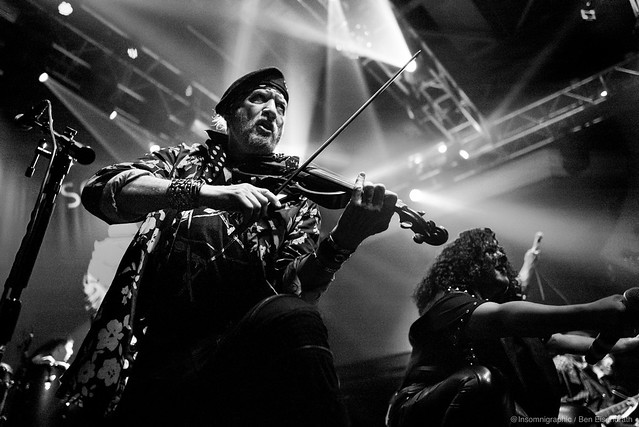 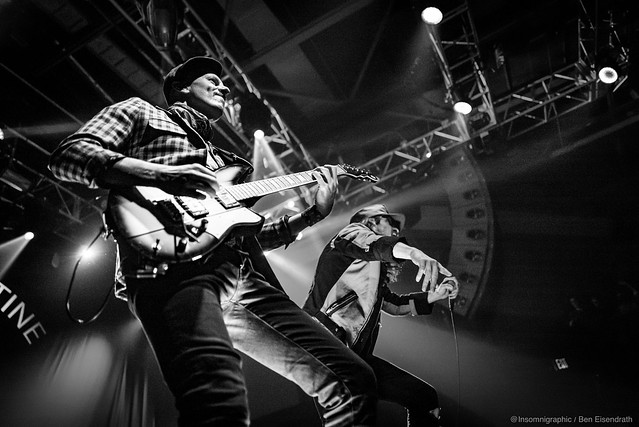 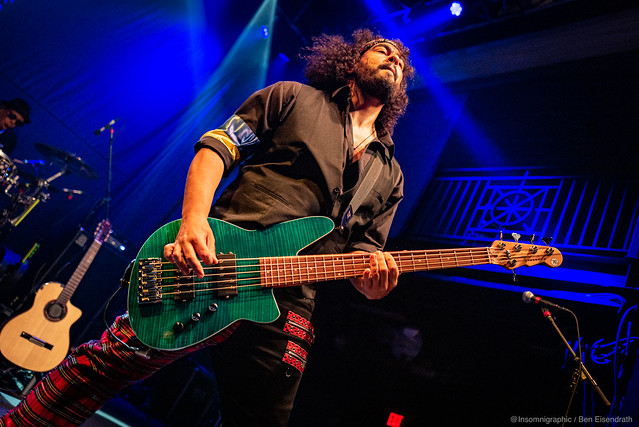 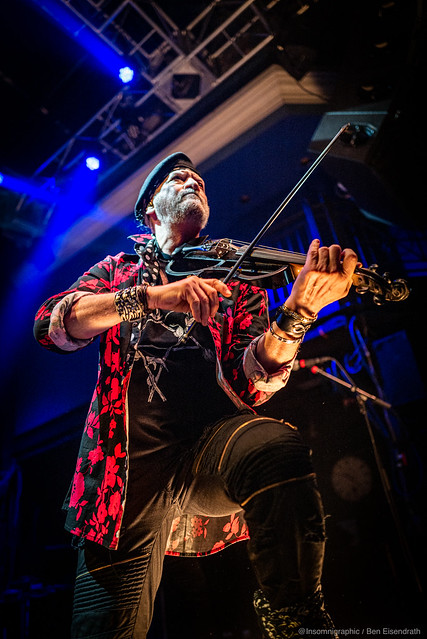 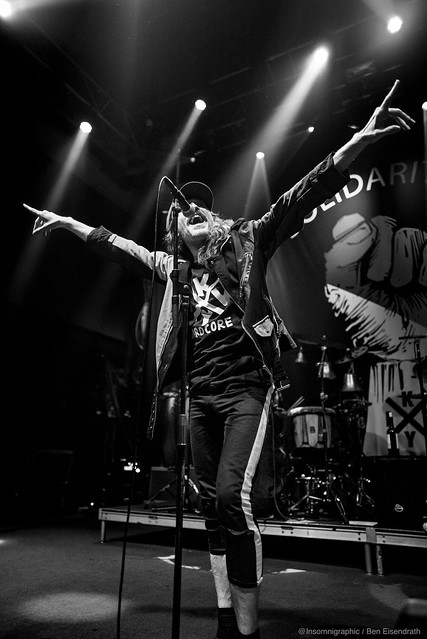 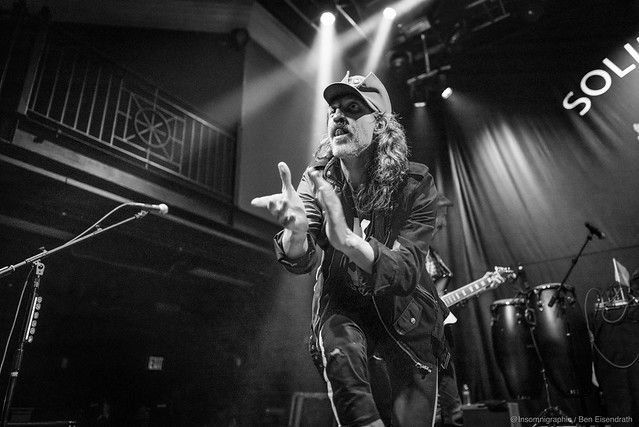 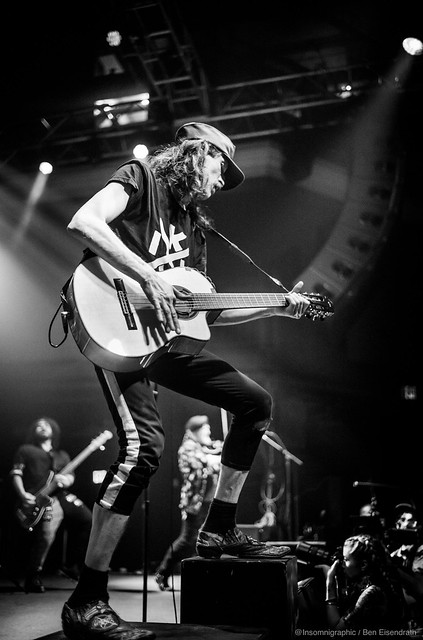 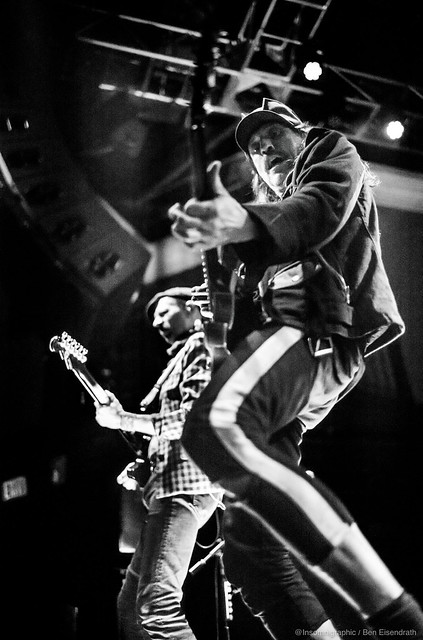 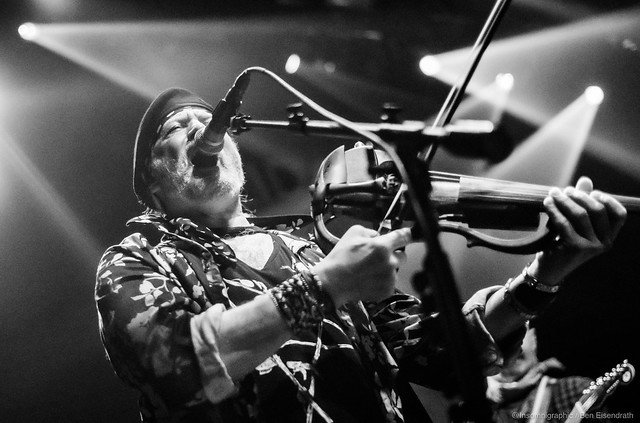 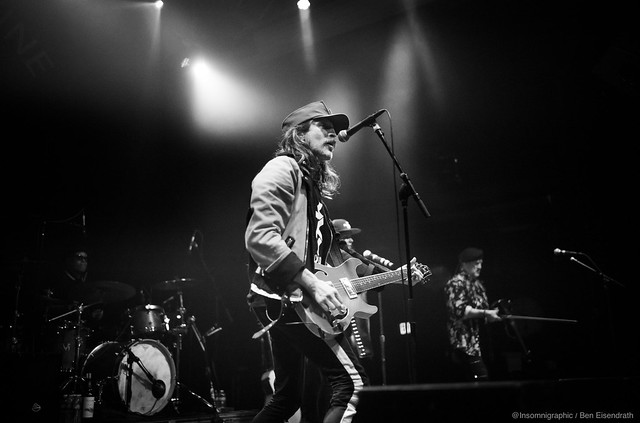 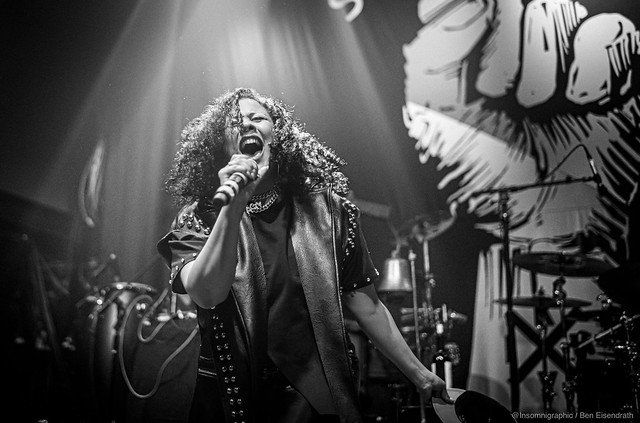 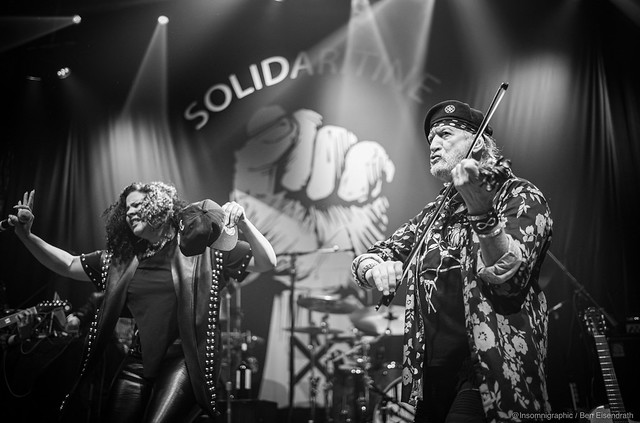 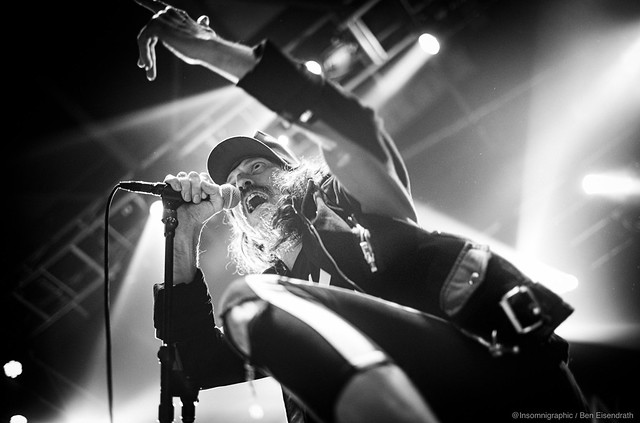