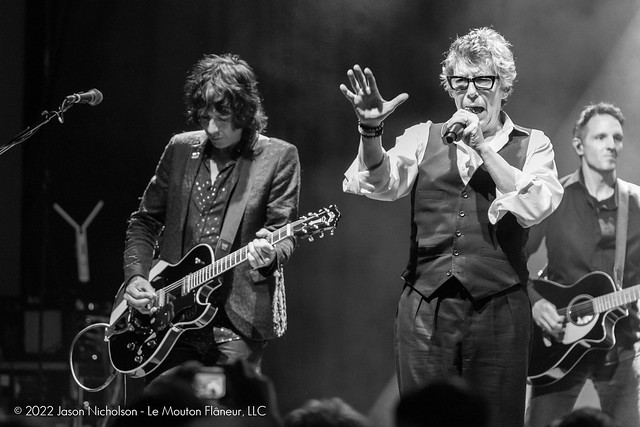 The Psychedelic Furs perform at The Fillmore Silver Spring on July 17, 2022. (Photos by Jason Nicholson; Words by Mickey McCarter)

The music of The Psychedelic Furs is the haze of a muggy summer day. It hangs in the air, and you can see wafting up it as you move through it. Their music is the gentle breeze that breaks through that haze, and it’s the downpour that happens when the humidity becomes too much to bear. The cool air that follows is also the music of The Psychedelic Furs — crisp and refreshing.

The sweet relief does not come without a bit of unpleasantness, and that is a key ingredient of The Psychedelic Furs’ compositions. We were reminded of such on a particular muggy day recently when The Psychedelic Furs showered The Fillmore Silver Spring with fuzzy earworms, wrought in extraordinary confidence and competence.

Such confidence and competence came as no surprise at The Fillmore Silver Spring on July 17. The Brothers Butler — Richard and Tim — have been doing this since 1977, and their confidence in their craft is justified by the extraordinarily memorable songs they create. Four other members of a band that has been a touring machine for years added layers of formidable competence to the ensemble.

The Psychedelic Furs went into the recording studio for the first time in nearly 30 years to produce a 2020 album called Made of Rain, which again speaks to comparing the band’s music to a summer squall. This then was the Made of Rain Tour, and the latest album constituted about a third of the 17-song setlist. The beginning of the show featured most of these, as The Psychedelic Furs performed “You’ll Be Mine,” “The Boy That Invented Rock & Roll,” and “Wrong Train” early in the concert.

Watch a lyric video for “You’ll Be Mine” by The Psychedelic Furs on YouTube:

The very full concert hall listened attentively to the new material and clearly welcomed it although the songs have not yet reached the iconic status of music released by The Psychedelic Furs in the 1980s. That was very plain when The Furs performed “Pretty in Pink” a little after the show’s midpoint, and the admirers sang along in a hushed manner, clearly transfixed by a song that has been a part of their cultural consciousness for more than 35 years. The sting of the song was famously refashioned into a tune of fond remembrance to herald the movie of the same name, but man has it withstood the test of time.

That any band should release so many songs that have made such an indelible impression on so many remains a remarkable achievement, and The Psychedelic Furs did not leave the audience wanting when it came to their much-admired neo-psychedelic gems. Consider: So strong are these tunes that The Psychedelic Furs built a touring juggernaut on the back of the best six of them, performing constantly around the globe and regularly selling out venues still, and all of that prior to the release of Made of Rain, only their eighth studio album to date.

And so Richard gleefully threw open his arms to sing those songs we always want to hear: “The Ghost in You,” “President Gas,” “Love My Way,” and “Heaven” in the main set. Tim beamed widely as he gripped his bass tightly. The two brothers made good use of the expansive stage of The Fillmore Silver Spring, pacing to the sides and front and converging to share a moment such as at the end of “Heaven” when Tim leaned into the audience (well, as much as possible with the stage barrier). And quickly The Psychedelic Furs returned for an encore of “Heartbreak Beat” and “India.”

Watch the official music video for “Heartbreak Beat” by The Psychedelic Furs on YouTube:

“Heartbreak Beat” was again demonstrative of the greatness of The Psychedelic Furs. Saxophonist Mars Williams, one of the best saxes in the rock business, introduced the song with its signature notes. Guitarist Rich Good (who received songwriting credits for a number songs on Made of Rain) chugged along to generate the song’s distinctive guitar riffs. Keyboardist Amanda Kramer subtly added the neo to the psychedelia of this song and others while drummer Zack Alford (a very new member) crashed on his high hats as if distant thunder to give the chorus its distinctive percussive smacks.

The distant sound of thunder — indeed! Brimming full of passion and energy, The Psychedelic Furs stay the course as a friendly tempest. Never threatening but reminding us still that into every life some rain must fall, and that this is a good thing.

Speaking of good things, Los Angeles punk rockers X opened the show, and the audience was really there for it! The Fillmore Silver Spring filled up quickly for X, who unwound a long set of 18 songs on July 17. What a legendary group! Exene Cervenka, John Doe, Billy Zoom, and DJ Bonebrake rocked, rolled, and rattled through a clutch of well known favorites, particularly from debut album Los Angeles — the title track of course and “The World’s a Mess, It’s in My Kiss” early in the set and “Your Phone’s Off the Hook But You’re Not” later in the set.

X too came with a fresh studio album. ALPHABETLAND was released in 2020, marking the band’s first studio record in nearly 30 years (sounds familiar!), and X performed four songs from the record. The new songs were great, and X was tight. Exene’s familiar voice alternated between biting and bewitching. John Doe blistered through the rhythmic throes of the undeniably catchy X catalog. The Indefatigable Mr. Doe cut one of rock’s most impressive figures — an extremely talented instrumentalist and singer whose kindly weathered face commands your attention. Although seated for much of the show, Billy Zoom was a true showman, bestowing unparalleled class to his guitars. Drummer DJ Bonebrake put some real muscle into X’s percussive-heavy missives, and the team was complete!

Watch the official music video for “ALPHABETLAND” by X on YouTube:

This was quite a show!

Should you be at all tempted to see the always touring Psychedelic Furs, then seeing them with X is surely the way to go.

Here are some photos of X performing at The Fillmore Silver Spring on July 17, 2022. All pictures copyright and courtesy of Jason Nicholson. 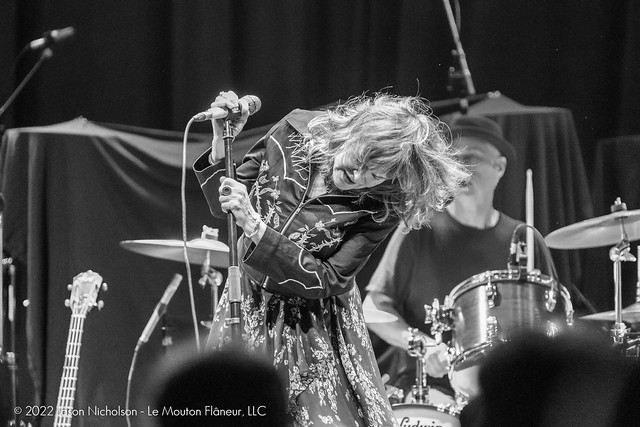 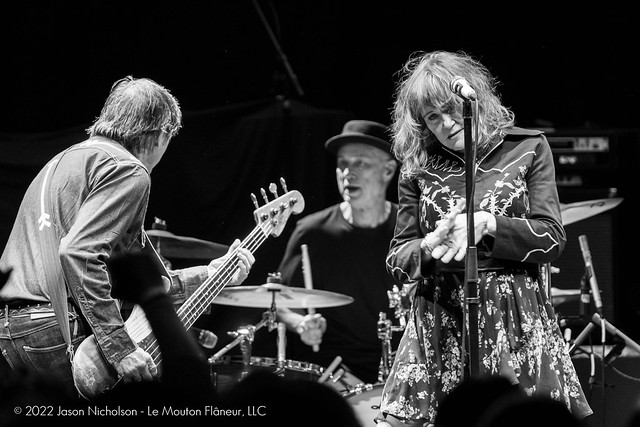 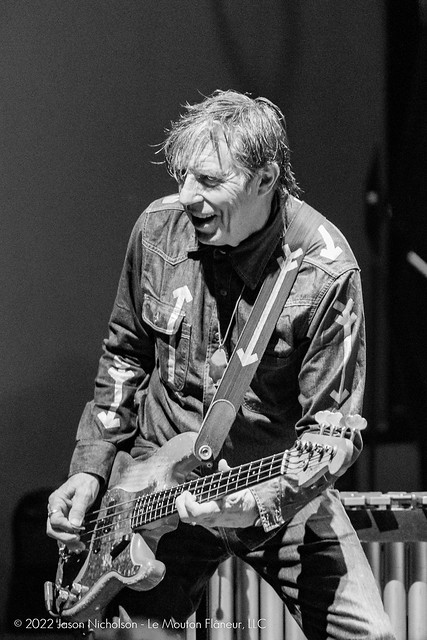 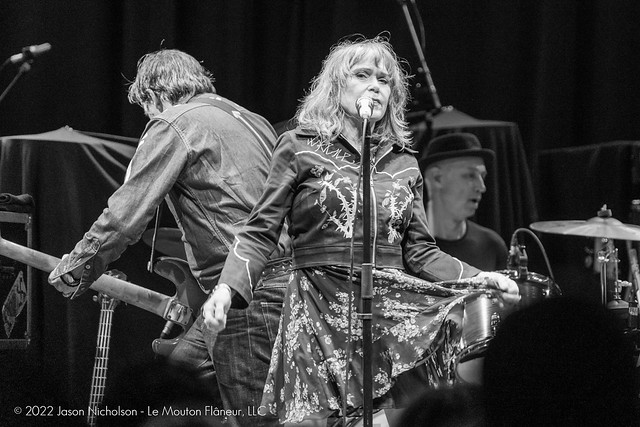 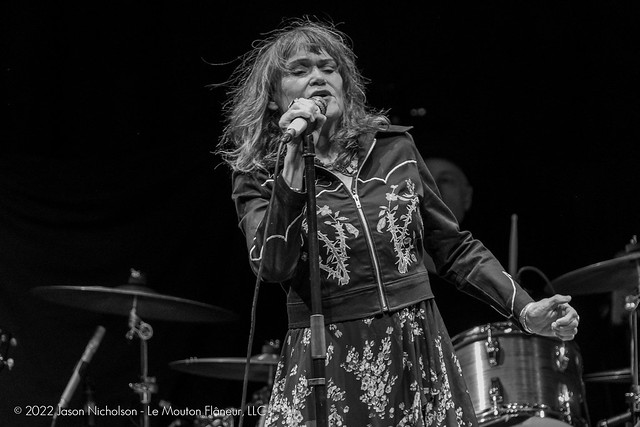 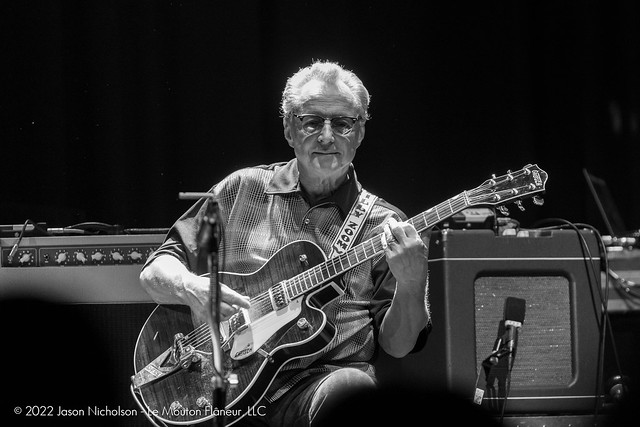 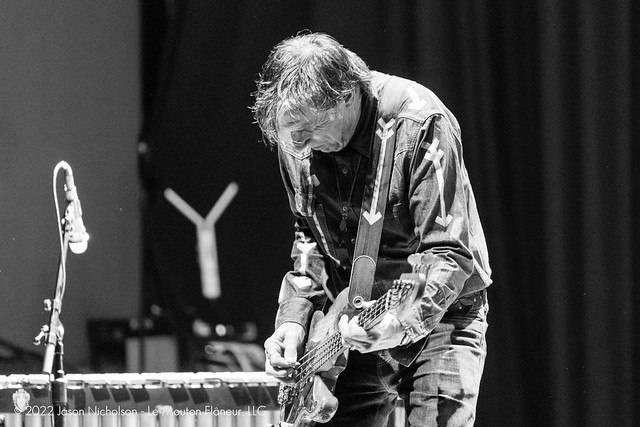 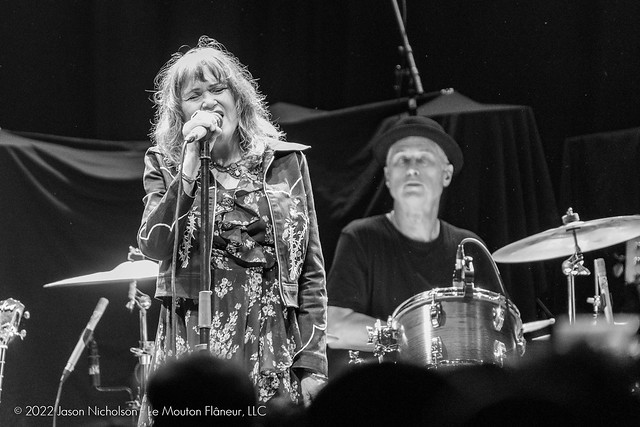 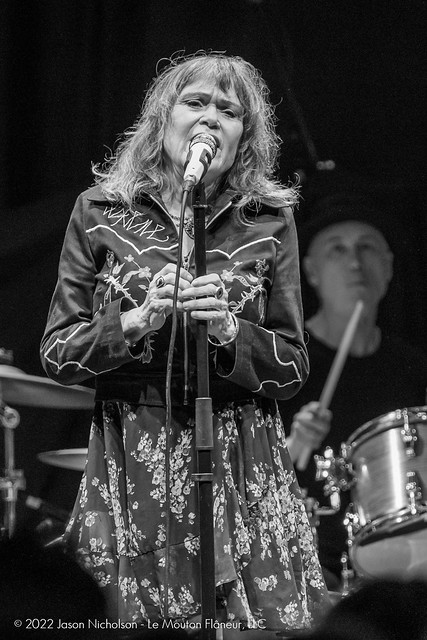 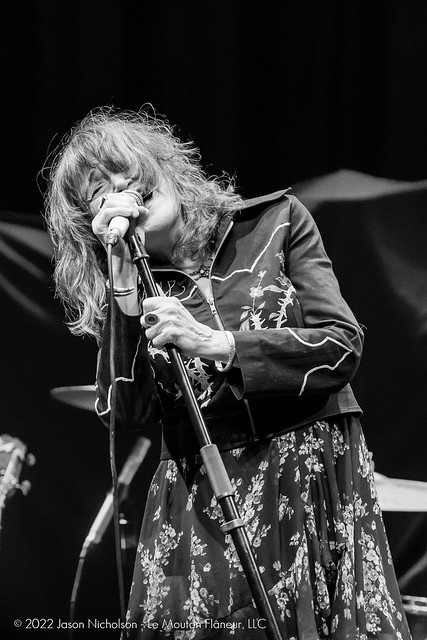 Here are some photos of The Psychedelic Furs performing at The Fillmore Silver Spring on July 17, 2022. All pictures copyright and courtesy of Jason Nicholson. 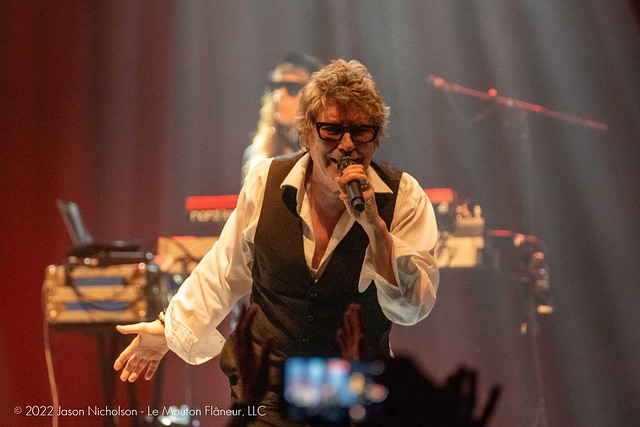 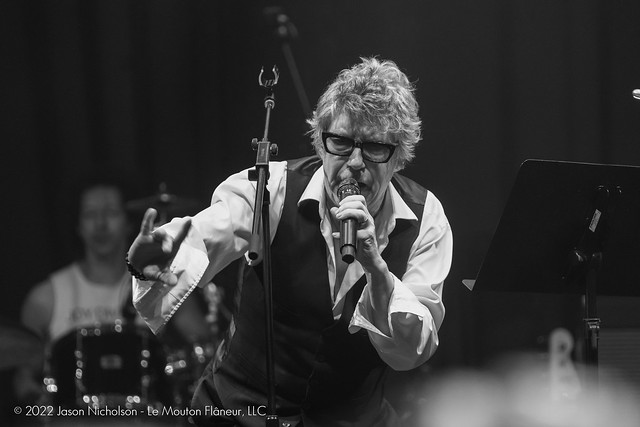 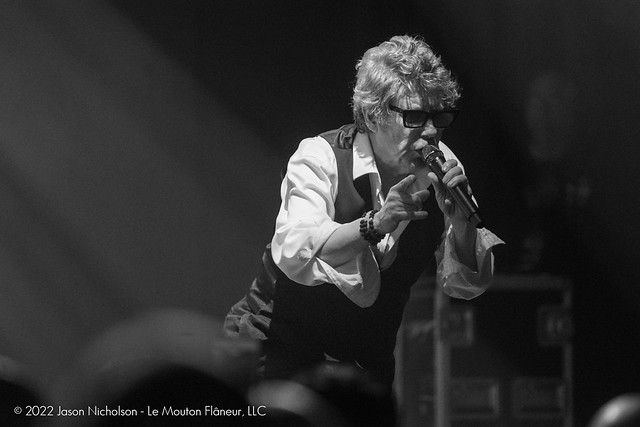 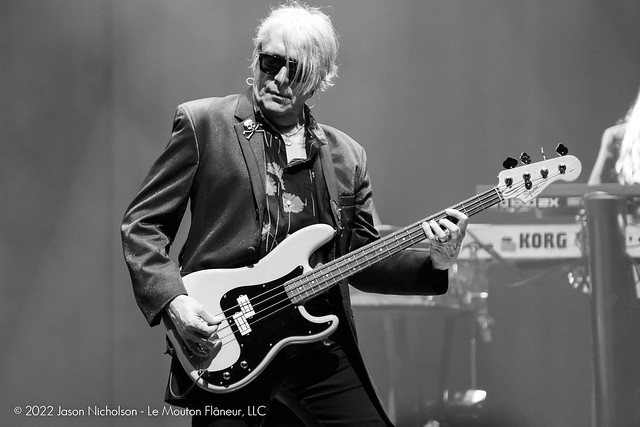 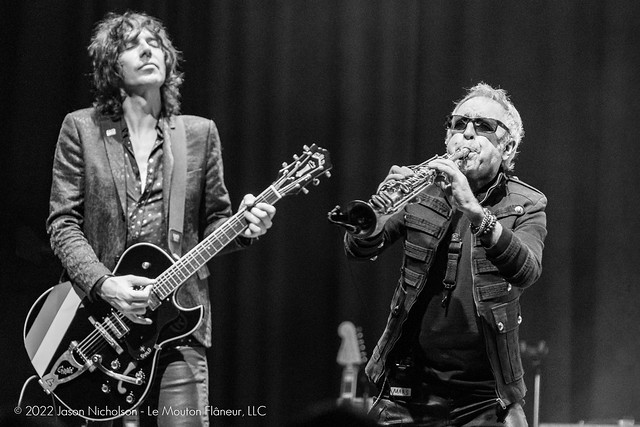 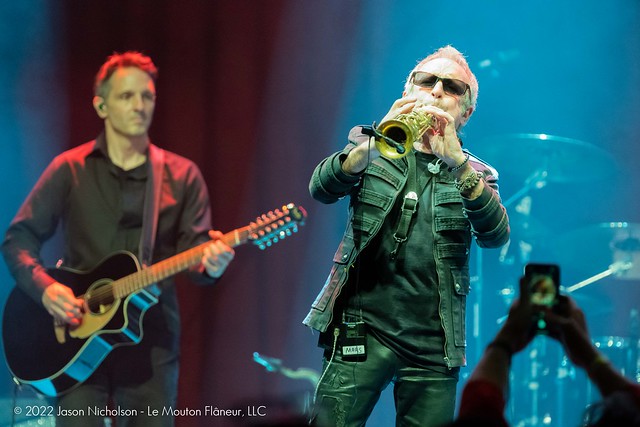 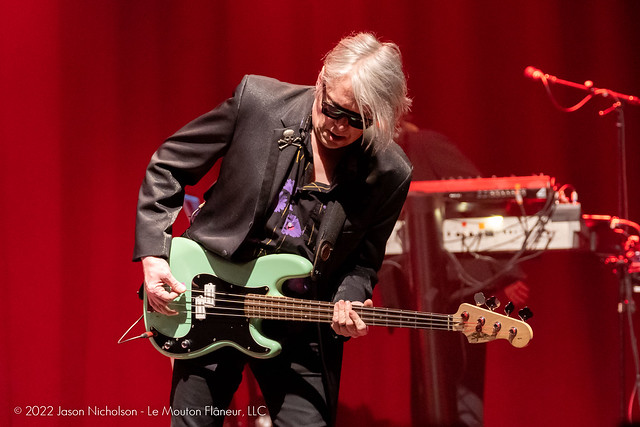 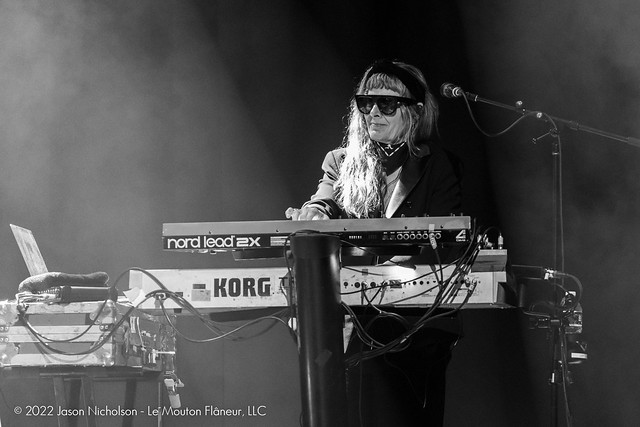 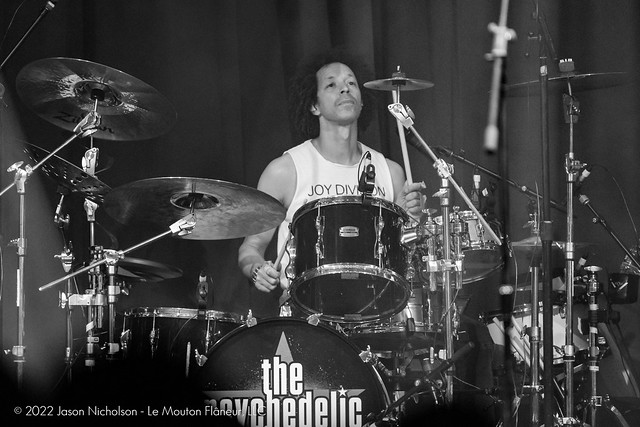 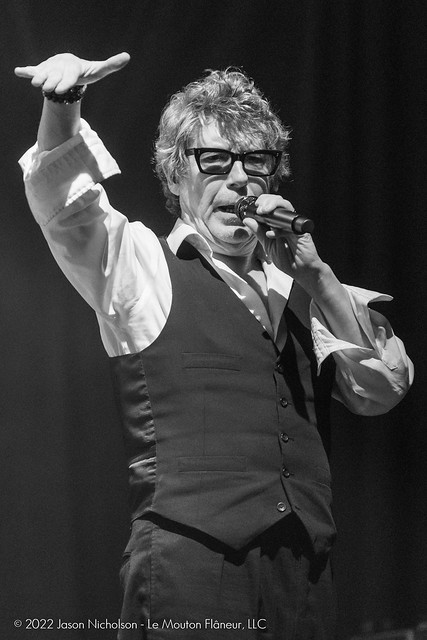 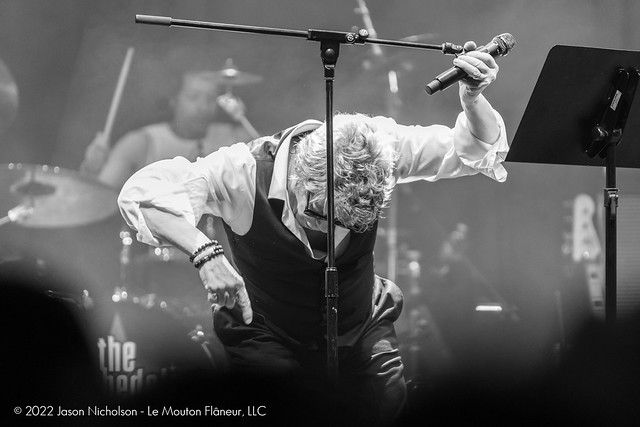 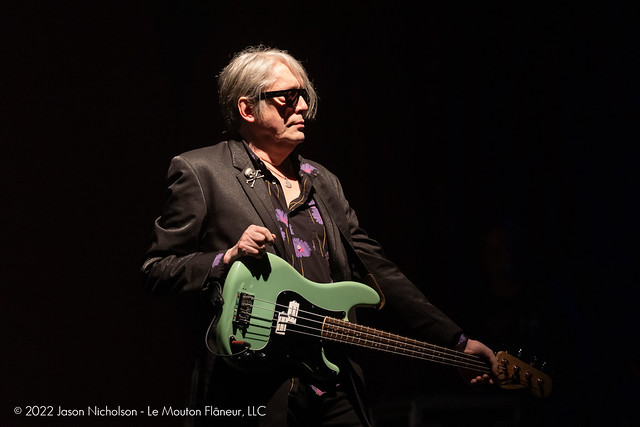