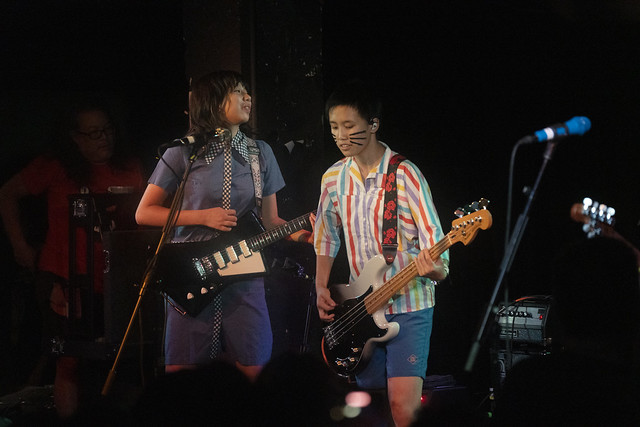 The Linda Lindas perform at Black Cat on July 27, 2022. (Photo by Mickey McCarter)

Probably the youngest band ever I’ll see in a commerical concert venue, The Linda Lindas proved they certainly have the chops to rock in their recent appearance at Black Cat in DC.

The day before I went to see the rising quartet, I received a press release about their cover of “Tonite” by The Go-Go’s. Those familiar with The Linda Lindas, based in Los Angeles, would not be surprised by the news that they recorded a studio version of the track from The Go-Go’s debut record, Beauty and the Beat, but I am still even now learning about The Linda Lindas and what makes them tick. The Go-Go’s, long one of my favorite bands and Los Angeles legends, are fundamental to understanding The Linda Lindas.

You see, the girls formed their band initially for a performance organized by Kristin Kontrol. They stayed together and honed their skills by playing covers. Those covers often were songs by The Go-Go’s, which isn’t surprising as that all-female quartet stormed the charts in 1982 from their base in Los Angeles. As for recording “Tonite,” The Linda Lindas say, “Because the cover is such a hit at shows, we decided to record a studio version to pay tribute to the greatest all-female rock band of all time, a crucial part of the LA punk scene, and our heroes.”

At Black Cat on July 27, The Linda Lindas performed “Tonite” near the end of their show, and drummer Mila de la Garza took lead vocals from her drumkit. At stage right, her sister, Lucia de la Garza, swung her guitar with joyful abandon. This teen can really play and she struck her strings with rapid rhythm. In the middle of the stage, Eloise Wong, painted as if cat whiskers adorned her face, fiercely clawed at her bass. On stage left, guitarist Bela Salazar lost herself in the music.

The cover was really great; it was raw, spikey, triumphant, exhilirating. But you don’t need my endorsement. The Linda Lindas already have performed the song with The Go-Go’s drummer Gina Schock, so that’s all the endorsement you really need.

Stream The Go-Go’s song “Tonite” by The Linda Lindas on YouTube:

The Linda Lindas have high-profile supporters in their creative space, for sure, and they also enjoy a leg-up with a Grammy-Award winning dad — Carlos de la Garza, who has engineered prize-winning albums for Ziggy Marley, Paramore, Wolf Alice, and others. Father to Lucia and Mila, Carlos produced The Linda Lindas’ debut record, Growing Up, a worthy and affecting first album released this year by Epitaph Records. Hell, it would be a terrific debut for a band twice the age of The Linda Lindas.

The Black Cat setlist drew heavily from that debut record, of course, along with two tracks from a self-titled EP dating to 2020. The band started the show with the “Growing Up” title track, thrashing about the stage in true punk style. Lucia provided vocals on the song, which was minimal but powerful, and Eloise and Bela stomped in time during the tune’s very catchy refrain.

For their second song, The Linda Lindas stepped back to “Missing You” from that self-titled EP, and Eloise sang lead. Befitting her whiskers makeup, Eloise roared and growled through the spitfire song. They stuck with the EP for “Monica” next, and Bela sang the lead, explaining the song is about one of her cats. It’s a fun song, easy to pogo along to, and Bela is probably the best singer of the group.

I clip through those first three songs for a reason: A different member of The Linda Lindas sang lead on each. As a band, these young ladies truly worked as a collective, and it was really impressive to watch.

Watch the official music video for “Growing Up” by The Linda Lindas on YouTube:

If you hadn’t yet heard The Linda Lindas for any other reason, their song “Racist, Sexist Boy” caught attention earlier this year, and it appears as the last track on Growing Up. The song, which The Linda Lindas played as the next to last song in their set, serves as a mission statement for the girls: Calling out the rude and uncivilized. The song burnt its “jerkface” target, who shoots off his mouth and closes his mind. Eloise stormed through the lead vocal, and the entire band physically threw their whole beings into their shared condemnation.

At the very end of the show, The Linda Lindas tapped another influence, Bikini Kill, for a raucous cover of “Rebel Girl,” during which they were joined on stage by openers Bacchae, a DC power pop band that was clearly overjoyed to travel and perform with these young breakouts.

The Linda Lindas have a lot yet to say and do, and they most certainly will return soon. Make it a priority to feel some earnest girl power they next time they play.

Here are some photos of The Linda Lindas performing at Black Cat on July 27, 2022. All photos copyright Parklife DC. 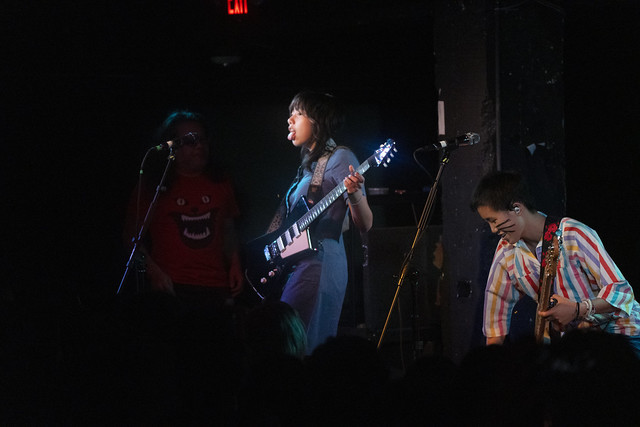 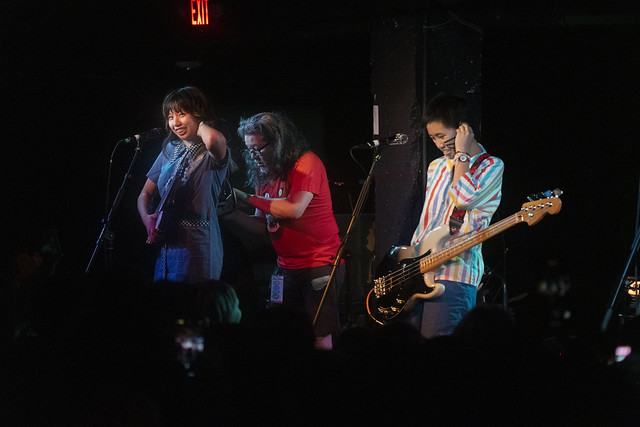 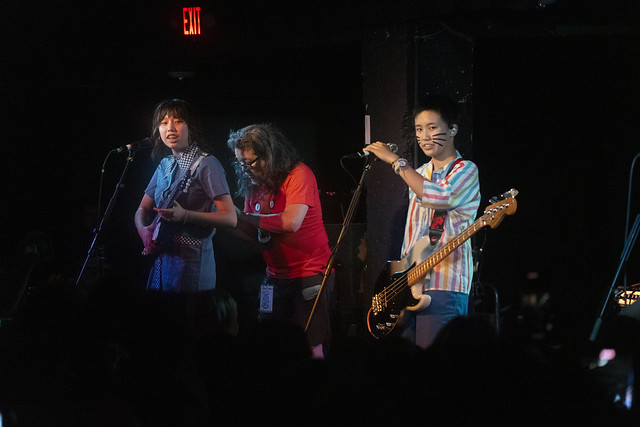 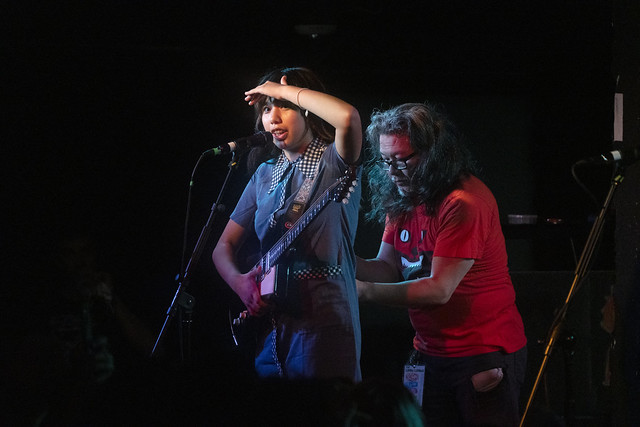 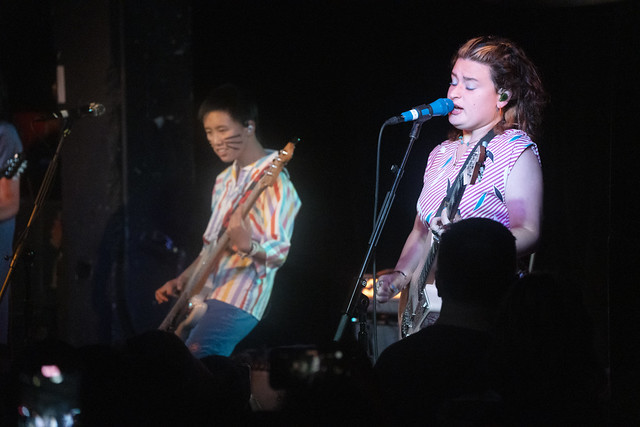 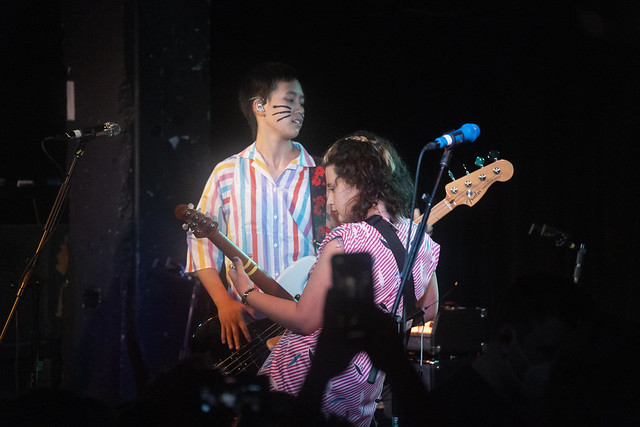 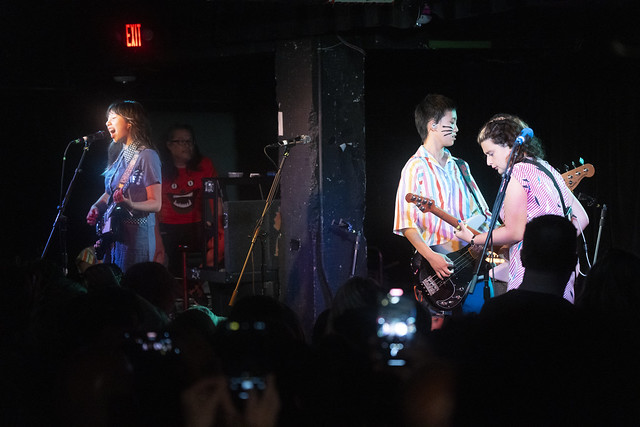 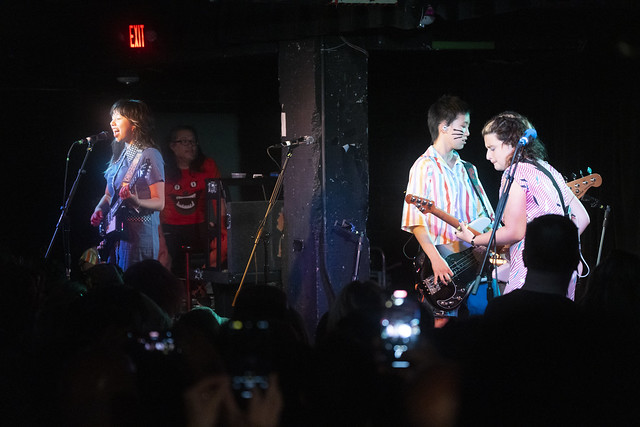 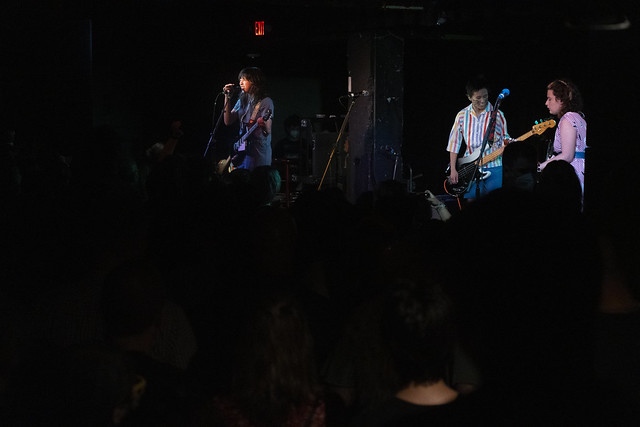 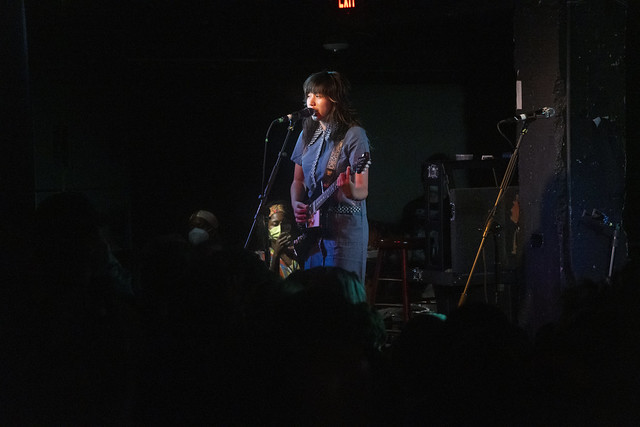 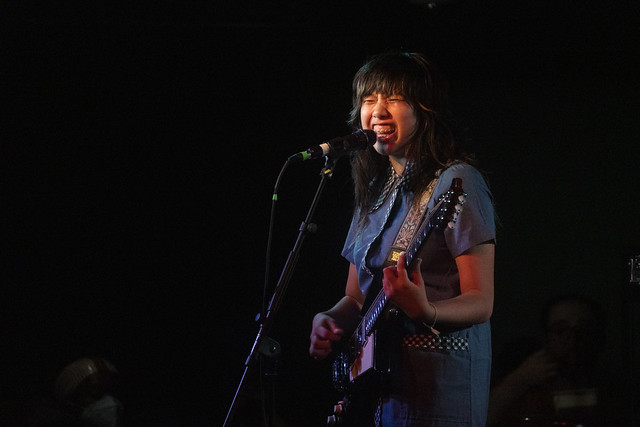 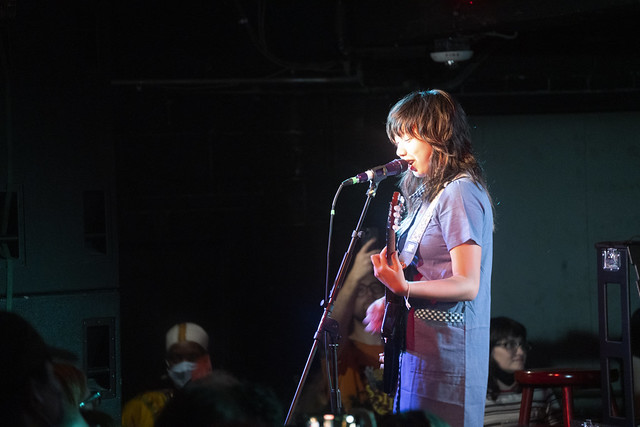 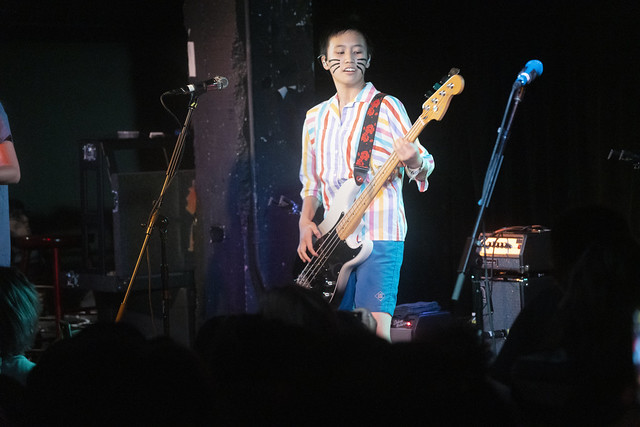 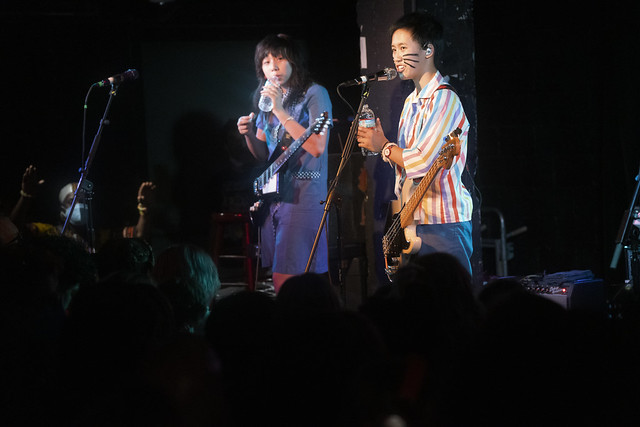 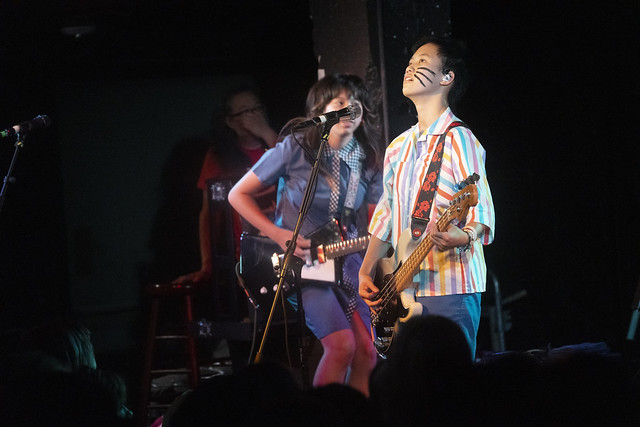 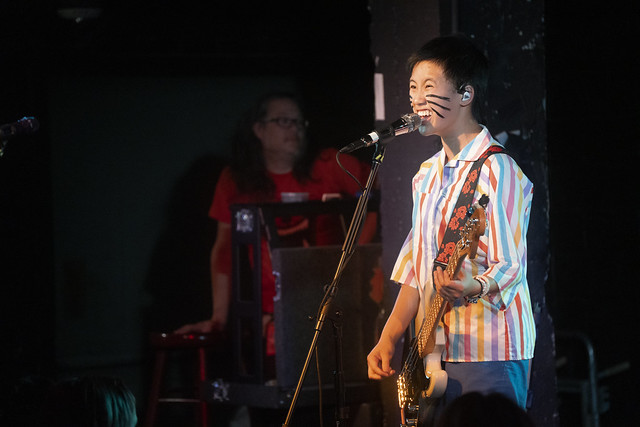 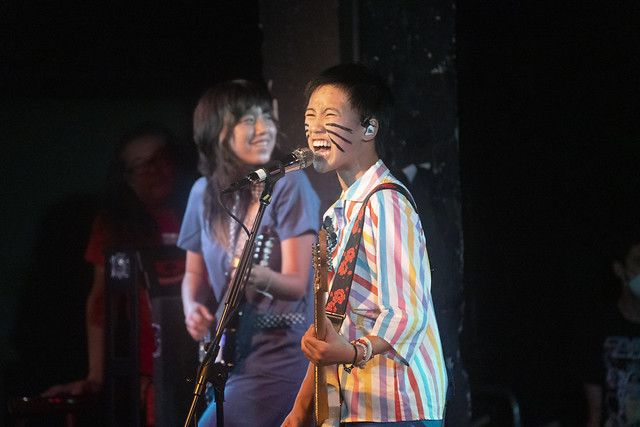 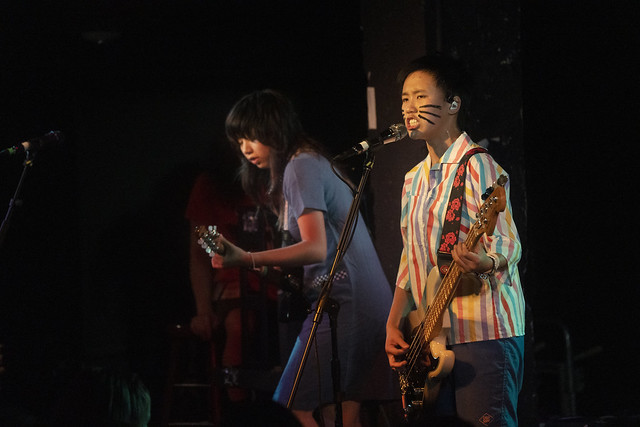