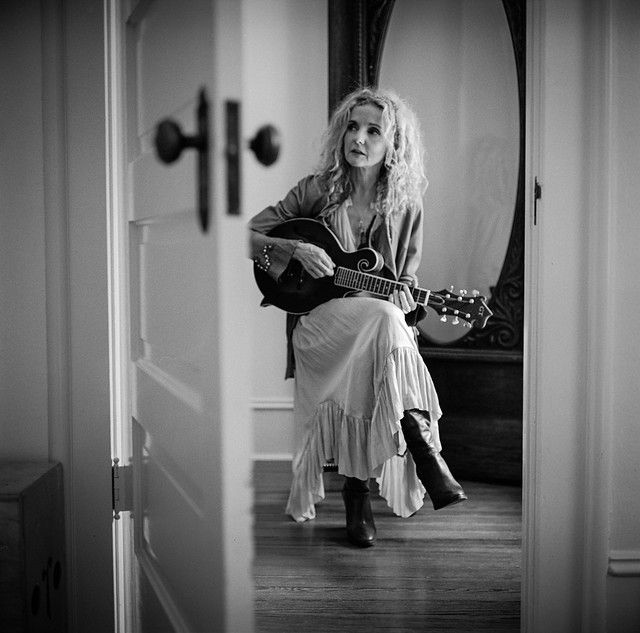 Neko Case and Patty Griffin have long admired each other’s work, but hadn’t shared a stage before a recent double bill at Wolf Trap. Griffin, who played first, let the audience know how excited she was to see Case. Case, for her part, talked about coming up in the ’90s and said, “Forget about Townes Van Zandt, I wanted to know about Patty Griffin.”

That comment might be a dig at journalists’ attempts to pin Case’s influences, a game which is typically not found amusing by the artists themselves.

Though both are fiery redheads with incredible voices who emerged in the mid-to-late ’90s to become two of the most acclaimed singer-songwriters of the new millenium, Case and Griffin came from very different backgrounds.  A native of New England, Griffin said, “I waited tables for a thousand years, but I became homicidal.” She then became a switchboard operator at Harvard from 1992-1994. She spoke some real truth about the abilities the job requires — remembering “thousands of numbers.” It was during this period, when she was already past 30, that Griffin was just starting to explore music and write songs. “One day I wrote this one,” she said, and she accompanist David Pulkingham launched into the title cut of her 2015 album Servant of Love.

Case comes from the opposite coast — she considers Tacoma, Washington, her hometown. Her musical development happened at an earlier age, and in a different context. Griffin played solo in the open mics around Boston; Case played  drums in several bands. Her emergence as a singer came later, first with the New Pornographers, then her solo career. She’s been, she emphasized, in a lot of bands — she’s worked with Her Boyfriends and the Sadies, I can’t name them all — and “Calling Cards” is “a love letter to all my bandmates.”

It was, Case shared, her first time at Wolf Trap on Sept. 9, and she told the audience she’d try not be overcome and start crying. This was part of some very characteristic, very charming stage patter which is hard to capture, but which definitely had to something to do with abortion, and which breathlessly led into a banger to start her set, “Moon Song.”

Stream “I Wish I Was the Moon” by Neko Case on YouTube:

Griffin had been to Wolf Trap before, the last time as an opening act for John Prine.  Getting a full slot allowed her to break out the song “Bluebeard,” which doesn’t work well in the opening sets she’s been doing for acts like The Chicks lately. The song, she said, scares people off. It’s based on an early Modern French folktale about a wealthy man in the habit of murdering of his wives. As Griffin put it, “There are things you know you know, but you’re having too good a time.”

If there was a similarly bleak point in Case’s set, it came with “Never Turn Your Back On Mother Earth.” “I love nature,” she said, “and it doesn’t give a shit about us.” Rather than anxiety or sadness, this is actually a source of comfort for her, that, ultimately, she is small and rather insignificant.

Case may have made the most pointed political comment, but Griffin was not far beyond her in song. Her “250,000 Miles,” which she cited as “roughly the distance between the Earth and the Moon,” prefigured the first song in Case’s set. It was also “an immigrant story, about ending up in strange places.” Griffin mentioned that the moon is one of her favorite subjects to write about. Griffin also brought up the issue of “choice,” and sent out “Be Careful” to “all the girls.”

If the moon is a favorite subject for Griffin, animals occupy a similar place in Case’s heart. Her set included a number of songs that worked this territory: “I’m An Animal,” “Last Lion of Albion,” and “Maybe Sparrow,” which closed the main set. When she told the crowd that the previous day was her birthday, someone in the audience shouted something back, and she said, “I thought I heard I you say, ‘I have a dog for you!'” Case doesn’t really need any more animals; she lives with a menagerie on a farm in rural Vermont, while Griffin has now lived in Austin, Texas for the past couple decades. (I first saw her perform live at the Austin City Limits Festival in 2004.)

The crowd got more boisterous during Case’s set, though it wasn’t out of control. Someone shrilly screamed, “Neko, I want to be you when I grow up!” and she snappily responded, “I’ve never heard that combination of sounds before.” Her replies come incredibly fast, and she’s whip-smart; it’s impressive to watch her do it. Griffin is no pushover either, but the her audiences treat her sets more like a folk show.

Griffin’s set featured many of her fans’ — and my — favorite songs: the title cut of her second album, Flaming Red; “Luminous Places” and “Where I Come From,” from her Grammy-winning self-titled LP; the joyous “Oh Heavenly Day” and the paean to struggle, “(When It Don’t) Come Easy,”; “Shine A Different Way,” a celebration of each person’s unique light; and the set ended with a prayer for “No Bad News.”

Case’s set also delivered heavily on crowd pleasers, like “This Tornado Loves You;” the title cut of her latest original LP, Hell-On; the lyrical and intricate “Deep Red Bells;” “Margaret vs. Pauline’s” tale of two women in conflict; the mystery of “The Pharaohs” and the deeply personal “Hold On, Hold On;” and the original track “Oh, Shadowless” from compilation Wild Creatures (which she promised will be out on vinyl). For her encore, Case performed “Vengeance Is Sleeping,” “Halls of Sarah,” and “Star Witness.”

Both artists were in top form. It was a real treat for fans, and Griffin and Case were clearly excited about getting to finally work together. These two are always a good show, and they didn’t disappoint.