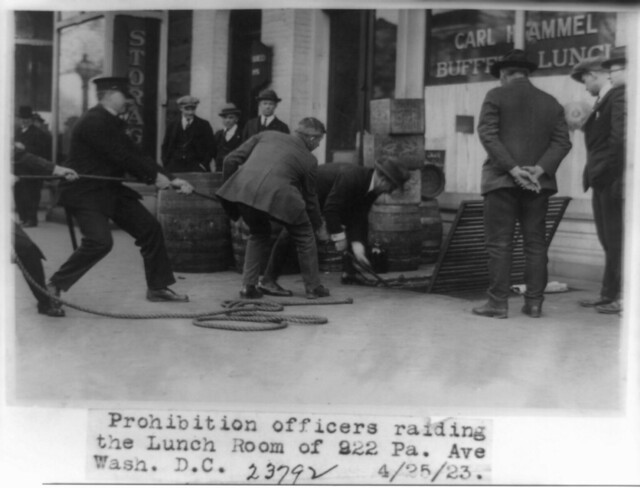 On Jan. 16, 1919, Congress amended the Constitution to outlaw alcohol in the United States under the 18th Amendment.

The ensuing Prohibition lasted for 13 years, during which alcohol remained available through underground and criminal operations.

Franklin D. Roosevelt vowed to repeal Prohibition. On Dec. 5, 1933 Utah became the last state to vote in favor of a repeal, giving the United States the three-quarters majority required to overturn Prohibition as federal law. (However, alcohol sales did not resume in DC until March 1, 1934!)

In DC, our cocktail crowd observed Repeal Day with an impressive zeal each year. This year, the biggest Repeal Day party likely will be found today at Jack Rose Dining Saloon (2007 18th St. NW, DC), which will host its 4th annual 1930’s-inspired party from 5pm-close today.

The party is free (although alas drinks are not), and includes burlesque dancers, specially priced cigars, bottomless champagne and complimentary “midnight snacks.” The bar will offer specials on Pappy Van Winkle bourbon and rye from Kentucky’s Buffalo Trace Distillery during a happy hour 5-7:30pm. You also can order a $45 four-course prix fixe tasting menu with a 1930s theme in the saloon.

Section 1. After one year from the ratification of this article the manufacture, sale, or transportation of intoxicating liquors within, the importation thereof into, or the exportation thereof from the United States and all territory subject to the jurisdiction thereof for beverage purposes is hereby prohibited.

Section 2. The Congress and the several States shall have concurrent power to enforce this article by appropriate legislation.

Section 3. This article shall be inoperative unless it shall have been ratified as an amendment to the Constitution by the legislatures of the several States, as provided in the Constitution, within seven years from the date of the submission hereof to the States by the Congress.

Section 1. The 18th article of amendment to the Constitution of the United States is hereby repealed.

Section 2. The transportation or importation into any State, Territory, or possession of the United States for delivery or use there in of intoxicating liquors, in violation of the laws thereof, is hereby prohibited.

Section 3. This article shall be inoperative unless it shall have been ratified as an amendment to the Constitution by conventions in the several States, as provided in the Constitution, within seven years from the date of the submission hereof to the States by the Congress.

Some may want to believe today is a federally recognized holiday (and Dewars campaigned for such a thing in 2007), but Repeal Day is actually a registered trademark of the Museum of the American Cocktail (located in New Orleans, La.). Visit http://www.cocktailmuseum.org for more information. 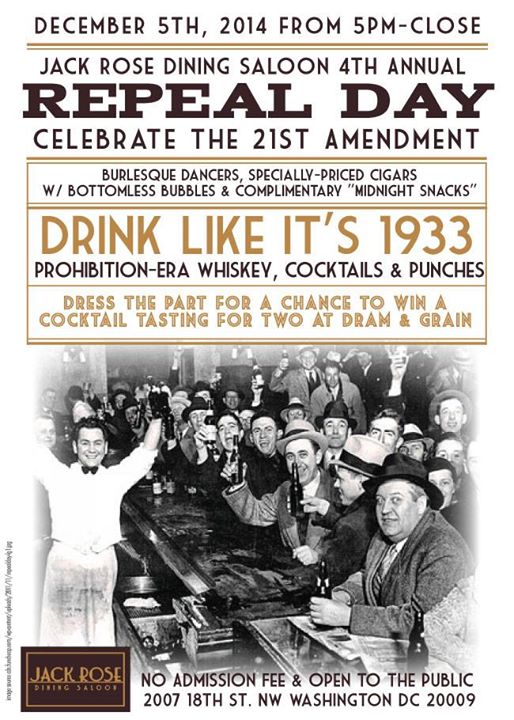