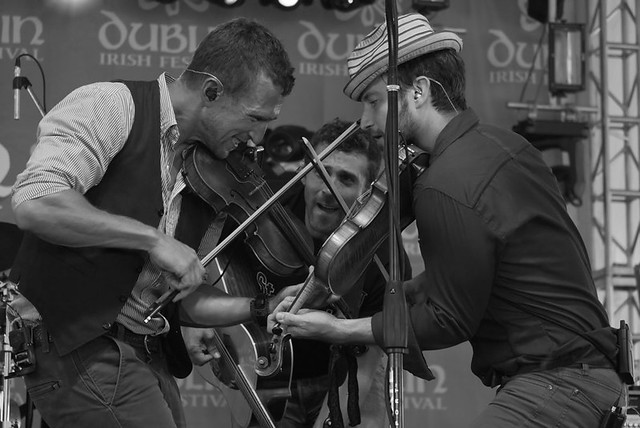 Early in the set, the band introduces “Paint This Town” as a song about moonshine and dancing, and they fire up some appropriately loose and rootsy barnstorming as Alexander takes lead vocals and his signature fiddle for the song.

They close out with “Fields of St. James,” which they dedicate to “Irishmen who don’t let the truth get in the way of a good story.” Danylo switches off from rhythm guitar to accordion for the number as Alexander spins a tall tale.

Scythian demonstrate some versatility in a slightly darker song, Whiskey, a sea shanty of sorts, from their 2012 album “It’s Not Too Late.” Josef and Alexander both take up violins as Josef leads some darker, mournful vocals in telling whiskey that “it’s a devil” that “has taken all that is good from me.”

The band sings as a chorus for the happier “Hey Mama Ya” a zydeco-style song from their fourth studio album, American Shanty. The audience embraces it as nonsensical, riotous fun.

Scythian celebrated its 10th anniversary last year, and the band is going strong despite some lineup changes over the years, including the addition of drummer Tim only within the last year or so.

As they do annually, they are performing several pub shows in the DC area as a nod to their roots. On Thursday, they play at Fado (808 7th St. NW, DC), and on Friday, they hit Flanagan’s Harp & Fiddle (4844 Cordell Ave, Bethesda, Md.), the new incarnation of the suburban pub where they actually got their start (formerly at 7637 Old Georgetown Rd., Bethesda). On Saturday, Scythian head to Baltimore to perform at Mick O’Shea’s (328 N Charles St., Baltimore, Md.).

Scythian have gotten really quite good and the core members have truly demonstrated that they know what it means to put on a show. It’s worth your while to catch them again soon, particularly if you’re inclined to see them in an intimate pub show this weekend rather than at a sold-out ShamrockFest with an audience of thousands last weekend.