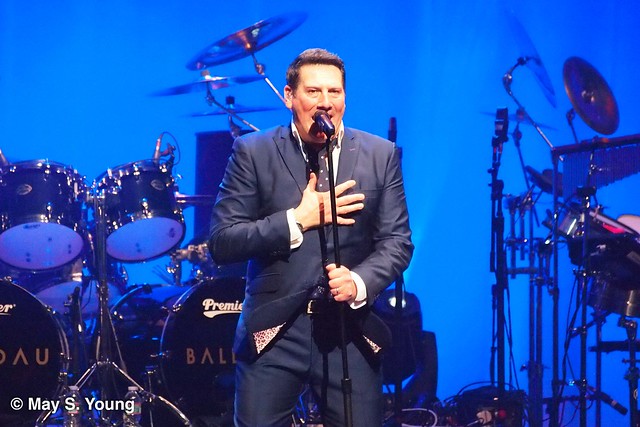 Watch a fan video of Spandau blowing the audience away with “To Cut a Long Story Short” in an Italian concert in March:

After other new songs like “This Is the Love,” Spandau Ballet move into some well-honed gems in the middle of their set, hitting “Chant No. 1,” a continually thunderous stampede of electric English power. Those audience members who don’t leap straightaway into dancing are left only to gape at the show of force as all five members of the band and their touring keyboardist strike as one cohesive machine into the heart of funk.

Here, as in many other places, nominal band leader Gary Kemp wields his guitar like the thing of power that it is. Gary’s gentlemanly swagger is infectious, and you can feel the renewed kinship between himself and Tony — and indeed all of the bandmates — as a palpable presence of its own. The sheer joy they express while performing is unmistakable — and a highlight of watching them play.

The high spirits come down only for a bit during a somber tribute to a fallen comrade. After “Chant No. 1,” the band perform a mix of some of their best electronic numbers in tribute to the late Steve Strange, the vocalist, club founder, fashionista and impresario who was a good friend to the band and helped them to get their start in London in the early 1980s at The Blitz Club. Steve Strange sadly passed away of a heart attack while in Egypt in mid-February, and Spandau Ballet served as pallbearers, mourners and eulogizers at his funeral in March.

At Tony’s introduction, the ensuing medley relied upon old-school four-on-the-floor, “a rhythm pattern used in disco and electronic dance music, which is a steady, uniformly accented beat in 4/4 time in which the bass drum is hit on every beat in common time,” according to Wikipedia. The medley included a bit of “Musclebound” and a lot of “Reformation,” “Mandolin” and “Confused” before closing with a flourish in “The Freeze.”

Through it all, the force of nature that is drummer John Keeble has drummed continually in an impressive demonstration of timing and strength. He takes the spotlight later in the concert for an instrumental interlude with “Glow,” at the end of which he rises up on his drum kit to cheer back at the audience like a champ. Tony and Gary have taken a break during “Glow” to return to the stage alone as a duo for “Empty Spaces,” giving Gary an opportunity to play a double neck 12- and 6-string on loan from Jimmy Page! — Tony and Gary then tease “Gold” with an incredibly moving audience singalong. 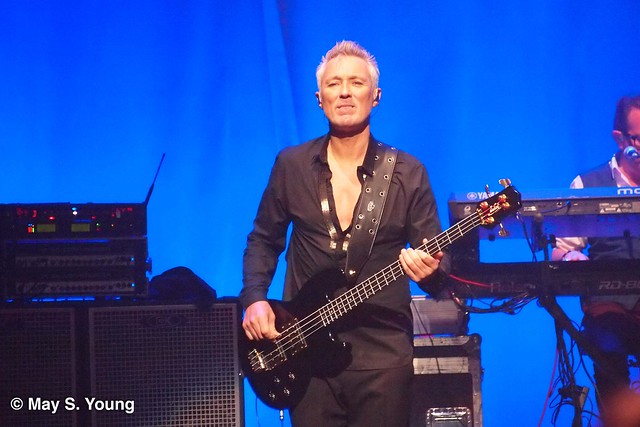 The dapper Martin Kemp on bass in New York City on May 2.

The gents close their main set with “True,” their most famous U.S. song, and their smooth groove envelopes the room, driven by a strong bassline from Martin Kemp, looking improbably dapper and relaxed. Indeed *this* much is true: The dashing Martin did much the same throughout the entire show.

An encore of “Through the Barricades” and a full-throated performance of “Gold” close out the performance, leaving an utterly hysterical audience calling out for even more from the band.

Spandau Ballet perform at the House of Blues in Boston on Thursday, April 30; at the Beacon Theatre in New York City on Saturday, May 2; and at the NYCB Theatre at Westbury in Westbury, N.Y., on Sunday, May 3. They then sadly leave the United States, only to return for some dates in California in July.

By the power of David Bowie, don’t miss this tour if it comes anywhere near you! You will be missing the show of the year, and perhaps even your lifetime.

Will they return to the United States in the future? It’s hard to say, but they are recording new material with super-producer Trevor Horn. And they really seemed to take a shine to DC.

As Gary said of Tony during the show, “He could be your neighbor soon! He kept asking about property values as we were driving around town!”

Your intrepid music reporter (between Gary Kemp and Tony Hadley) at Tuesday night’s show at the 9:30 Club