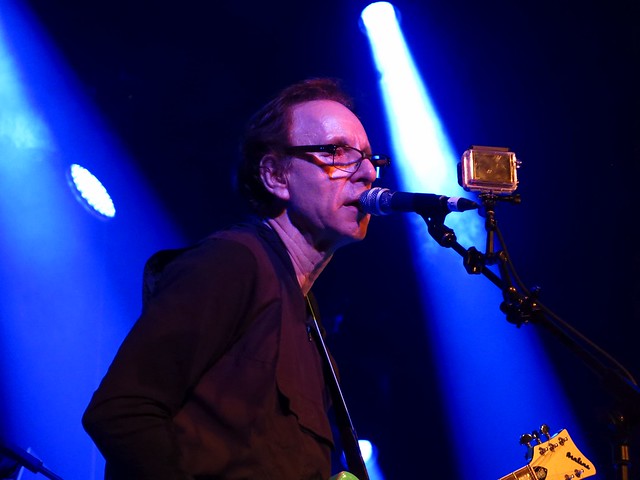 Colin Newman of Wire performs at Les Guess Who Festival in Utrecht on Nov. 22, 2014 (Photo by Rene Passet)

The guitars start out with a low, repetitive drone and then they break out into a trot.

A pleasant English voice begins to sing matter of factly alongside the guitars. The lyrics are conceptual not narrative. And as the song continues, the guitars hit peaks and valleys while the singer remains steadfastly laconic and sardonic.

This is Wire, and they have opened their concert Saturday night at the Black Cat with “Blogging,” the first track from their 14th album, the self-titled Wire, released in April. The band proves in this case to be much like many of their individual songs in that the more you get into it, and the more you think about it, the more it has to offer.

The London quartet, of course, practically invented post-punk upon forming in 1976, but they have not sat still, particularly since reforming after a break in the 1990s. Vocalist and guitarist Colin Newman is interested in what’s new. He likes to tinker and to move the dial forward, even if doing so within the predefined confines of the post-punk genre. I never previously saw a performer quite like him, and I immediately thought to myself that Colin is to the guitar what a Billy Currie or a Thomas Dolby is to the synthesizer.

No one in Wire plays a synthesizer, of course. But the sound they make — that beautiful sound!– nonetheless somehow encompasses the space age and the immediate. Somewhere, both contemporaries in the Buzzcocks and new kids in Prinzhorn Dance School are taking notes.

Almost immediately, Wire demonstrate their versatality with a jauntier tune from the new album, “Joust & Jostle,” which seems to be about keeping up with the speed of life. Appropriately, the song is speedier, and really rather resplendent. Colin looks up almost plaintively to the audience while bassist Graham Lewis keeps his head down over his instrument and drummer Robert Grey looks mysterious and wise as he practically meditates over sticks that never quit their speedy strikes on the kit below.

Fresh-faced guitarist Matthew Simms is a welcome addition to the band. He’s been there for a few years now, but Colin has credited him with significant contributions to the new album, and he no longer seems like a newcomer if ever he did.

A generous 20-song set played to a crowded and appreciative room Saturday included all 11 songs from the new album, emphasizing Wire’s desire to focus on its recent output. And the new album certainly thematically features songs of cautionary warnings, as with “Burning Bridges,” which offers a sort of story in which the narrator finds peace in love and then loses it somehow.

Here again, magnificent almost languid guitar work belies the potentially anxious nature of the lyrics. The guitars certainly don’t stress over anything — they take it easy even if the characters of the song potentially don’t.

Wire occasionally do revisit their back catalog, as the band does later in its set for “Blessed State” from third album, 154 (released in 1979), which features vocals by Graham. The bassist has a deeper voice, which while still friendly is certainly a touch more menacing than Colin’s voice.

As simple as “Blessed State” sounds, it still has all of the hallmarks of a Wire song, and it’s also full of wry commentary on life. Still, you can’t help but contentedly nod your head along to the lyrics, “Oh what a pearl/What a well-made world,” which sound warm and somewhat consolatory when Graham sings them.

And in the encore, Wire hits upon small gems like the short and sweet “Brazil” from 1977 debut album Pink Flag, spiking positively into upstart punk compared to some of their more stately post-punk compositions. They close the show with “Adore Your Island” and “Used To,” reminding the audience that they have been doing this sort of thing for a while.

Wire continue their tour tonight in Louisville, Ky., and then they perform for three nights in Chicago at three separate venues. They are experts at what they do, and they are a pleasure to see live. Catch them for refined post-punk melodies at their peak with a sound familiar yet experimental. You’ll undoubtedly depart oddly content. 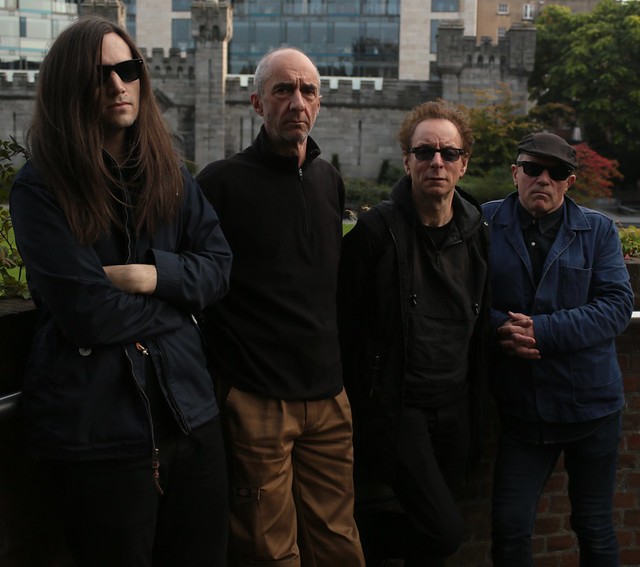