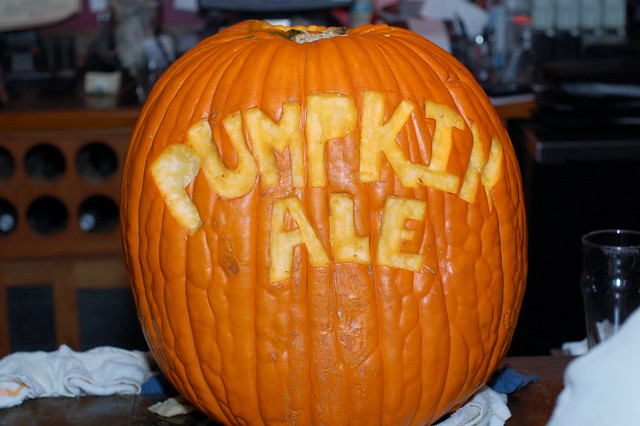 It’s that time of year. (Photo by Chris Romer)

Snallygaster 2015 offers revelers choices among more than 300 beers, roughly 50 of which are appearing at the festival for the first time. With only two days left to go until Snallygaster 2015, Jeremy and I spotlight a beer for your tasting pleasure.

Jeremy’s Beer of the Day: Schlafly Imperial Pumpkin Ale, ABV 8.0%
Part of what I like about Snallygaster is, to me, it signals the beginning of the pumpkin beer season. I know, I know, many breweries are releasing their pumpkin offerings earlier and earlier every year. Well, I haven’t had any yet. This Saturday will kickoff what I trust to be a productive season of imbibing all the pumpkin beers. By my count, there are at least 27 different pumpkin beers set to be available, as of today. I choose Schlafly’s version here, because a) I’m hoping to go to St. Louis in a couple weeks and invade the brewery, and b) it is consistently among the best pumpkin beers out there. I also like the Southern Tier Pumking and am seriously looking at the Avery Rumpkin (Vintage 2014), which has a 18.1% ABV!

Mickey’s Beer of the Day: Saucony Creek Captain Pumpkin’s Maple Mistress, ABV 9.5%
I’m sure glad Jeremy punctured the envelope around pumpkin beers first, as I know quite a lot of beer snobs hate them. He and I both love them, however, but I’ll blame him for bring them up first! I first drank a Saucony Creek Captain Pumpkin’s Maple Mistress, hailing from Pennsylvania, at Snallygaster 2014. Many of the good pumpkin beers taste quite a bit like pumpkin pie — like Schlafly above, Dogfish Punkin and the lovely Maple Mistress. Cinnamon, honey and of course maple wound out the package for this boozy beer. The Snallygaster beer list also has several pumpkin beers represented twice as they appear alongide their 2014 vintages. (I’m looking at you Heavy Seas The Greater Pumpkin and Southern Tier Pumking.)

C’mon! You know you want a pumpkin beer (or two).