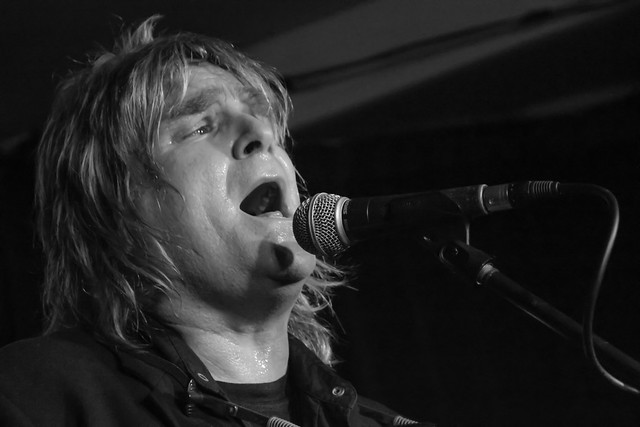 He walked out into a pitch-black stage to start the song “Majority,” strode out to where his bridge should be, and fell flat on his back into the pit.

Security picked him up, and he blundered through the song, disoriented. He regained his senses during the song, and he prepared to start the second song with his harmonica, which sadly was broken during his fall. By his third song, Mike thought he was back into the swing of things, but roadies had not plugged in his electric guitar.

A concert review the next day proclaimed Mike didn’t know the words to his own song, can’t play harmonica and was rubbish on guitar.

Thankfully, none of that was actually true, as Mike demonstrated in a crowd-pleasing lengthy set in celebration of the 30th anniversary of The Alarm’s second album, Strength. His voice was clear and sure; his guitar hand was steady and poised; and his harmonica was grounded and charming.

Mike began his set with “Howling Wind” from The Alarm’s first album, Declaration, before moving into “Unbreak the Promise,” “Majority” and “One Step Closer to Home” (a song he described as his favorite by The Alarm)—songs that debuted outside of The Alarm’s studio releases.

Mike then began to properly honor the album Strength with tracks like “Absolute Reality,” which inspired an audience singalong, and “Knife Edge,” which Mike delivered with passion.

Experience an audience singalong with “Absolute Reality” from a Mike Peters performance in Sheffield, England, on March 11, 2015:

While singing songs from the second album, Mike delighted the audience with a blue notebook, an artifact from The Alarm’s early days, which he occasionally referenced. He wrote the original lyrics of many of his second-album songs during the global tour in support of The Alarm’s first album, and he often revisited the book of lyrics to revise or extend his songs this year.

As Mike did so and played through the Strength album, he delivered an extended version of “Deeside,” a song dedicated to unemployed steelworkers in the early ‘80s who managed to pick themselves back up and soldier on for their families, with some of the original unused lyrics that he said he wasn’t brave enough to sing as a younger man.

Mike also played “Dawn Chorus,” “Father to Son,” “Only the Thunder,” “The Day the Ravens Left the Tower,” “Walk Forever by My Side” and a welcome rendition of “Spirit of ‘76” in honor of his punk rock roots from when seeing the Sex Pistols inspired him to become a musician.

He also of course performed “Strength,” the song that inspired the 2007 founding of his charity to fight cancer with its lyrics “Who will be the lifeblood coursing through my veins.”

And indeed, Mike invited concert-goers to “Get On the List” to become a blood donor to cancer victims — right there at the show. His Love Hope Strength Foundation has recruited more than 90,000 such donors to date.

Mike continues his tour tonight with a sold-out show in Byram, NJ, and goes on tomorrow to Philadelphia, and then across the United States to end his US tour at Red Rocks in Denver on Sept. 26.

The self-declared “first punk rocker” ever in Wales was in good form and high spirts, performing and telling tales like the reliable and experienced professional we’ve come to know and love. Welcome him like an old friend when he’s in your town.

Listen to Mike talk about the mission of his Love Hope Strength Foundation in this 2015 video: