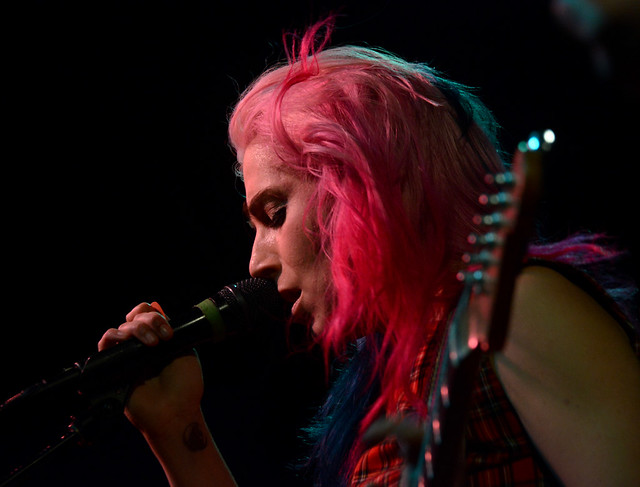 Sunny waves of dazzling surf roll out over the audience as High Waisted start to play.

The band waste no time in getting down to business on Sunday night at the Black Cat. Singer Jessica Louise Dye and her three bandmates are there to open for soul trickster Har Mar Superstar, but quite a crowded room has turned up early to see the surf rock quartet from New York City.

Sparking guitar from Steven Nielsen takes us back to the 1960s — even if we weren’t alive during the time, we feel like we are on a sun-drenched Technicolor beach with young Teri Garr or Toni Basil dancing on the sand.

Instead of those ’60s starlets, we have the capable Ms. Dye, who certainly holds her own as the center of attention with winsome looks, a magnetic stage presence, and a pleasant voice. With her guitar slung over her shoulder, she slinks and slithers along bright grooves, aided and abetted by bassist Jeremy Hansen and drummer Jono Bernstein.

Here are a few cool shots of Jess doing her thing, courtesy of our friend Ben. (Stay tuned for some shots of the band on film from Ben in the near future!) 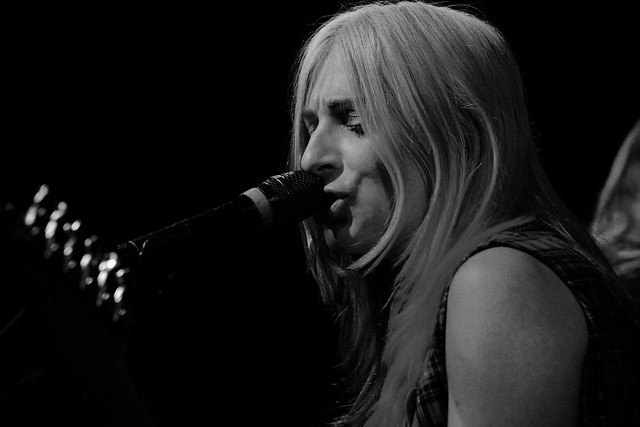 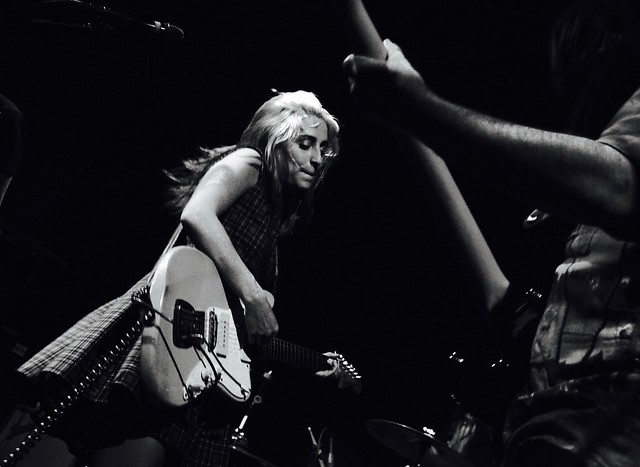 Last month, High Waisted released their debut album On Ludlow, named in tribute to a street in their home borough of Manhattan (and specifically the Lower East Side neighborhood), and it’s an immediate sensation. The first single, “Party in the Back,” is representative of the high-energy, celebratory nod to good times.

Elsewhere, Jessica’s pleasant cooing makes you comfortable rocking out to a song called “Shithead,” which is really quite an upbeat song despite the insult hurled at a disagreeable boyfriend. More agreeable is the buoyant invitation of “Door,” as she waits on the other side for yooooooou, punctuated by catchy “ooohs” and “aaahs.”

As much as the audience adores Jessica’s voice, some of the most fun and absorbing numbers from High Waisted are the instrumentals! I’ll sing again the praises of the vibrant Shanghai Spy, which should have been the theme music to a television caper starring Bruce Lee in 1966. It’s a thrilling bit of music exuding a sense of pop mystery. Similarly, the winning “Kitchen Safari” comes with the air of a spaghetti western, and the way it builds up slowly, you can easily imagine gunfighters glaring across a sweltering desert as they take the measure of the situation.

Fittingly, High Waisted close out their set as usual with a cover of Dick Dale’s “Misirlou” — and this time they are joined by the horn section from Har Mar Superstar. It was terrific pairing! 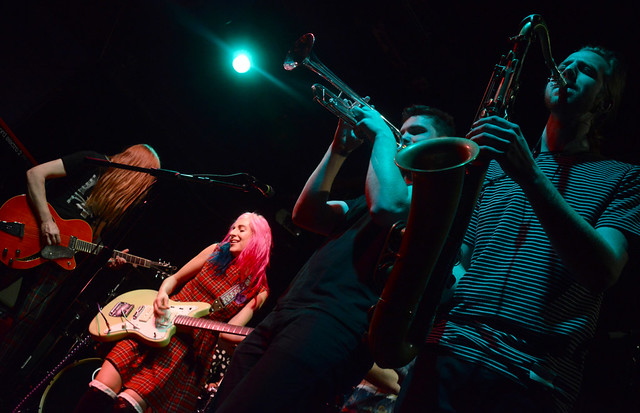 High Waisted are joined by band members from Har Mar Superstar for “Misirlou” at the Black Cat on Sunday, April 17. (Photo by Ben Eisendrath /Instagram+Twitter: GrillworksBen)

All in all, High Waisted are an exciting band that you must experience. I say experience because you have to go ready to have some fun. I imagine High Waisted are best enjoyed as they perform on a sunny deck overlooking an expansive pool somewhere. Alas, the band are not currently on tour, having wrapped up their stint with Har Mar Superstar. They do have a few shows coming up in New York City in May, however. They hop into the Market Hotel in Brooklyn on May 12 with fellow surf poppers La Luz from Seattle -– there’s a fantastic double bill for you -– and then Shea Stadium on May 18 with L.A. Witch and a few other bands.

I fully anticipate seeing them on a full headlining tour again here in DC quite soon. Don’t miss that show!