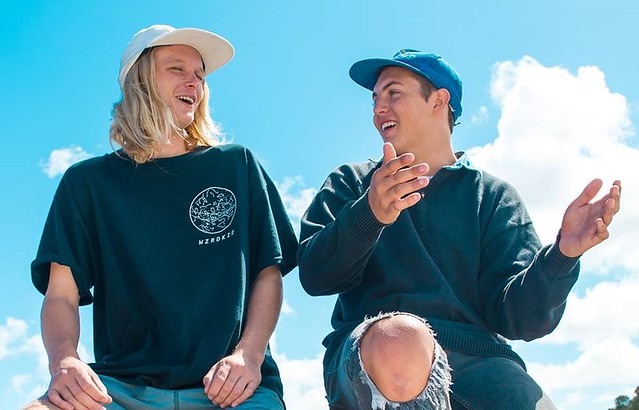 If you’ve followed this blog for a while, you know that I loooooove me some surf guitar.

Well, Australian surf punk duo Hockey Dad are about to kick up some punky surf in my face, and it will be good. They released their first album Boronia on August 12 via Kanine Records, and they promptly hit the United States for a tour. Tonight, August 19, Hockey Dad perform at Neurolux Lounge in Boise, Idaho, and they make their way to DC on Monday, August 29, to perform at DC9.

Guitarist and vocalist Zach Stephenson and drummer Billy Fleming grew up best friends on Boronia Street in Windang (hence the name of their album). Now, they like sunshine, women, and punk rock and they’ve combined their friendship and shared interests into some appealing music.

Hockey Dad caught fire with their EP Dreamin’, released via Australian label Farmer and the Owl, gaining admirers with songs like “Can’t Have Them,” “Seaweed,” “And I Need a Woman” prior to their 11-song full-length (which includes several of the EP songs as well).

Their first new single from Boronia is “Jump the Gun,” which Consequence of Sound said “wheels along jangly guitars that are distorted just enough to be comforting, like that slightly dazed feeling that comes with hours joyously soaking up sun and partying in the sand.”

Oh, yeah, you can listen to “Jump the Gun” by Hockey Dad on Soundcloud: