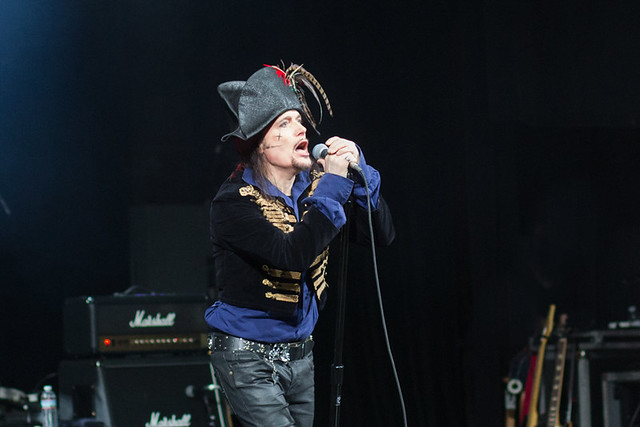 Adam Ant takes no prisoners in a great sold-out show at the Lincoln Theatre on Jan. 23, 2017.

With a gleam in his eye and fire in his belly, the iconic Adam Ant bounded onto the stage at the Lincoln Theatre on Monday night to shanghai us back to 1981.

In a thoroughly sold-out show, Adam sashayed his way through the entire album Kings of the Wild Frontier in a North American continuation of a 35th anniversary tour of the album that he began last year in the United Kingdom.

Kings of the Wild Frontier, the second full-length album by Adam and the Ants, was the U.K. #1 best-selling album in 1981, and won Best British Album at the 1982 Brit Awards. In the United States, the album produced three Billboard Top 20 hits — “Antmusic”, “Dog Eat Dog,” and “Kings of the Wild Frontier” — and garnered Adam and the Ants a Grammy Award nomination for Best New Artist.

Adam’s attention, however, was very much on the here and now as he ran through 12 tracks from the seminal album and then another 10 tracks from his historic catalog before closing the show with a three-song encore. Adam and his current band — known as The Good, The Mad & The Lovely Posse — damned the torpedoes and set their pirate ship to full steam ahead. Immediately thumping along to the tribal beats of “Dog Eat Dog,” the ensemble set the tempo high and gave a hearty heave-ho that set them assail for a solid hour and 45 minutes. 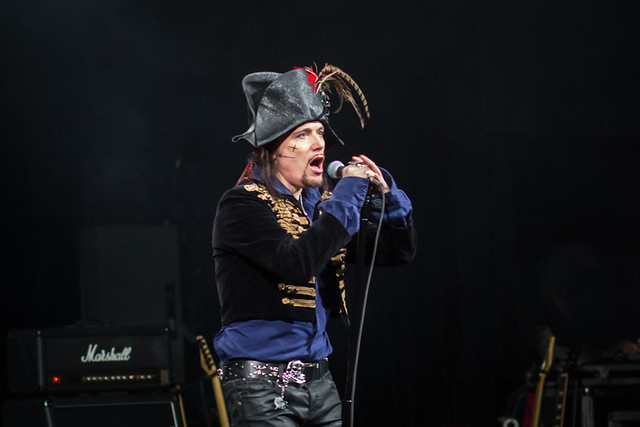 Capably supporting Adam, The Good, The Mad & The Lovely Posse are a talented crew indeed. A frenetic pace was ably maintained by Joe Holweger (bass), Tom Edwards (guitars), and Will Crewdson (guitars) as the night progressed. The pounding beats of many of the songs by Adam Ant, however, shine because of the unusual staging of dual drum kits, manned by Andy Woodard and Jola. Both are quite good, and work in tandem on complementary beats. The fashionable Jola also adds visual panache to the show with flair. For example, in DC, she wore a striking striped outfit with a black masquerade mask!

Adam looked great, wearing a fine version of his famous Blueblack Hussar hat and high pirate boots. The glam post-punk rocker remained in motion through the show, kicking up his heels and rising to the edge of the stage to look the crowd in the eyes. (Speaking of eyes, Adam left his spectacles at home, completing a flashback transformation to his very recognizable self, fresh from the MTV videos of his heyday.)

By the time Adam hit his second song “Antmusic,” the audience went absolutely wild and sang along at every turn. The jaunty riffs of “The Magnificent Five” kept the audience dancing on the heels of “Kings of the Wild Frontier.”

The second half of the set delivers more thrills as Adam blasts into the instantly recognizable “Beat My Guest.” Soon, he hits fan-favorite “Stand and Deliver,” and the already maddening crowd goes slightly madder for the signature song, singing along and jumping into the swing of things with abandon. Quite a few folks chimed in with perfectly times exclamations of “Hoh!” in the refrain where appropriate.

Perhaps the most impressive moments arrive later in the show. During “Desperate But Not Serious,” Adam sings the lyric–

But then he pauses for a long minute. The band freezes and the lights go down. During the long pause, the audience cheers fervently. Adam holds the moment as long as he can, brings the lights up, and slams into the last refrain in a remarkable demonstration of showmanship. 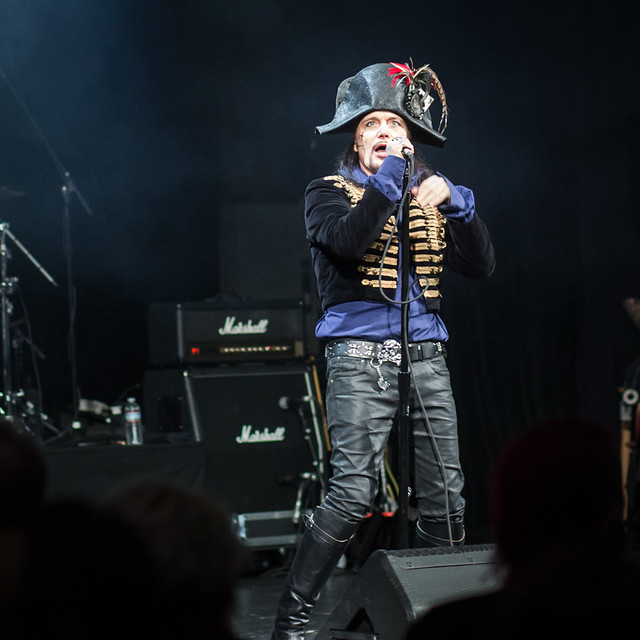 Adam ends the show with “Prince Charming,” where the audience once again becomes the star as he turns the last refrain over to us. We sing it to him in perfect unison, and he smiles in satisfaction. “Good night!” he proclaims, only to return for his encore after another round of extended applause.

[Updated Feb. 14] The sudden death of Adam’s friend and guitarist Tom Edwards forced a delay in some tour dates. The upshot is that Adam Ant returns to the East Coast on Feb. 21 to perform in the Philadelphia area and Feb. 22 to perform in New York City. These shows were previously sold out but rescheduling may have freed up some tickets. Go get them!

Many of the other shows sold out quite some time ago, but if you’re in the Southwest in particular, look around for tickets and go see this man! He is bringing fantastic energy to old favorites and thoroughly entertaining everyone in the process. The anniversary reprise of Kings of the Wild Frontier completely reaffirms Adam Ant’s unique place in modern rock history.

Encore:
Red Scab
Get It On (Cover of T. Rex)
Physical (You’re So) 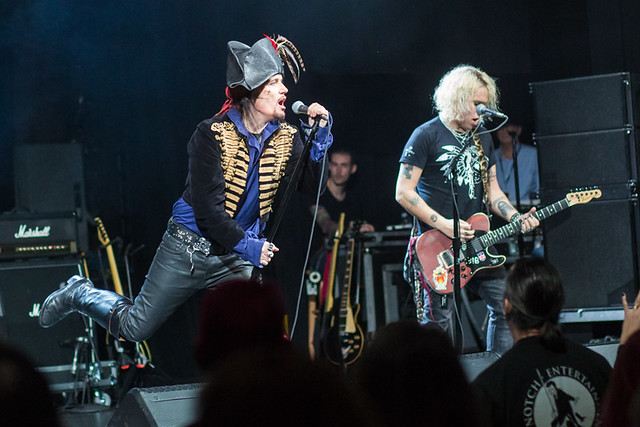 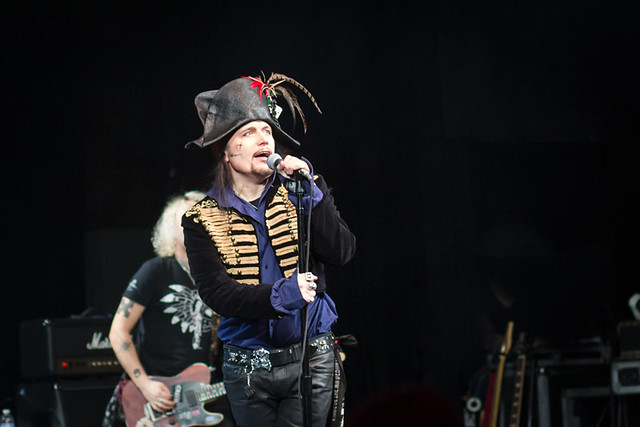 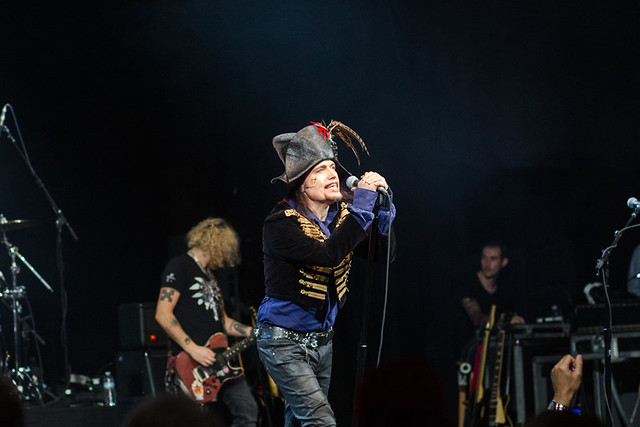 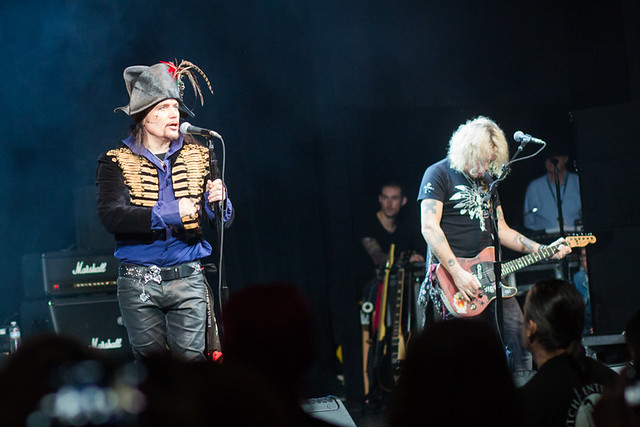 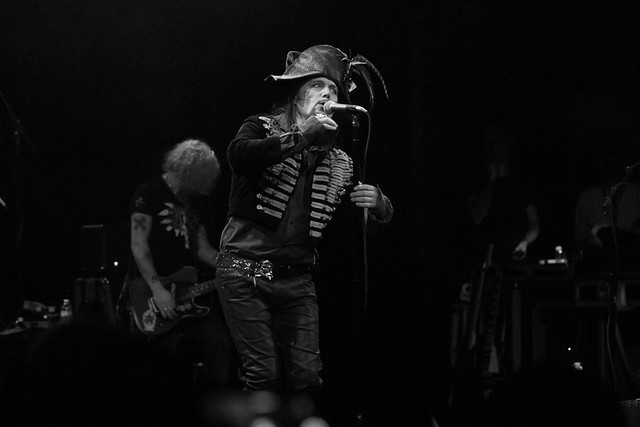 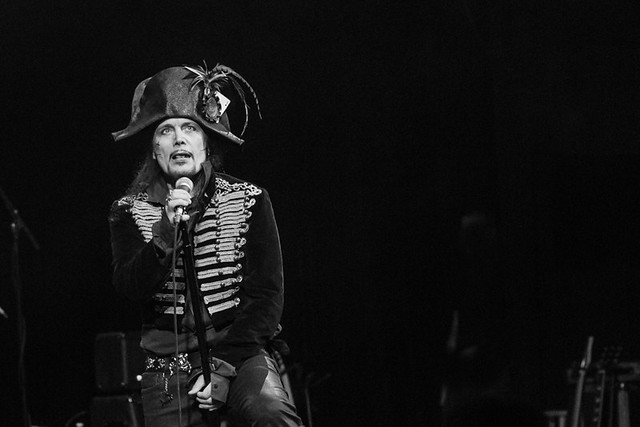