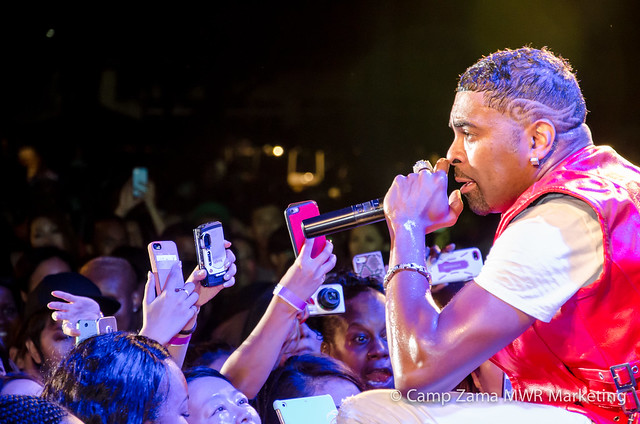 1996 was the year of attention grabbing breakouts: Hotlanta hosted the summer Olympics to catapult itself to the now entertainment mecca of the South, former Vice President Al Gore demonstrated the Macarena dance to the world, and Tickle Me Elmo arguably caused childhood frenzy. Though, in the world of RnB, Elgin Baylor Lumpkin, also known as Ginuwine, emerged out of the collaborative shadows of now superproducer Timbaland to start his solo career with the frenzied single, Pony! Two decades and seven albums later, the Grammy-nominated singer returned home to DC on Friday and reminded the Howard Theatre why he’s still the Same Ol G’.

Ginuwine expressed DC pride and fan appreciation throughout the evening. His six-piece band introduced him and started the show with an obligatory Chuck Brown instrumental which transitioned into the performance of Same Ol’ G. The diverse crowd of standing late 20-30-something singles, and sensual but seasoned, seated couples, tapped into their inner Chocolate City as Ginuwine transitioned into the Go-go backed “Hell Yeah.” The crowd appreciated his decision to remix his early songs into mini Go-go anthems and the walks down memory lane. Call-and-response style praises were exchanged as Ginuwine gave each DC quadrant and Maryland hoods of Baltimore, Suitland plus Oxon Hill much appreciated love.

Like the majority of ‘90s RnB singers, Ginuwine is a clear graduate of Black church vocal lessons, Ginuwine and his two male background singers engaged in three-part harmony mixes of “I’ll Do Anything” and “Stingy.” Fans were pleasantly surprised to notice that while he ditched extensive dance numbers, he experimented with genre blending and soulful instrumental rearrangements of his catalogue, which was a smart and creative choice. Case in point: The band helped Ginuwine to cover Michael Jackson’s 1982 single, “The Lady in My Life,” which showed love to DC’s lovely single women. The cover eventually led to a wardrobe change from streetwear to the mandatory grown-and-sexy attire, which helped during a breakdown when five confident women strutted on stage to show the audience how they danced and seduced, under the attentive eye and active pelvis of Ginuwine.

The latter portion of the show commenced when Ginuwine challenged fans to love and respect the lineage of DMV RnB that he named (Dru Hill, Marvin Gaye, Johnny Gill, and Mya). To satisfy the growing grown-and-sexy mood of the theatre, Ginuwine performed two of his biggest ballads of the early 2000’s — “Differences” and “In Those Jeans.” “Differences” was remixed with Jodeci’s cult classic, “Freek’n You,” which was supported by head-nodding and ad-libbing from both Ginuwine and each ‘90s RnB fan alike. To tame the crowd, Ginuwine and his two backing vocalists covered Prince’s “When Doves Cry,” which then transitioned to the performance of his 1996 single, “Only When Ur Lonely,” both a cappella.

To close, Ginuwine teased the audience of the show’s ending and in return the audience, in unison, began to shout “Pony!” and to their pleasure and excitement, he cued the band and the energy exploded word for word. Ginuwine even displayed his signature moves to the single, which were additional nods to Michael Jackson. The extended ending turned into a showcase for Ginuwine to put the spotlight on his background singers, bass guitarists, drummer, and congist individually.

Currently, 46-year-old Ginuwine is preparing to reprise his role in the stage play Married but Single, and he informed the audience of new music later in 2017. Takeaways from the show are that Ginuwine still maintains a loyal following — and while he may not dabble in extensive footwork, he still entertains with use of an arguably stronger and rawer voice with surprises of pulpit growls and responsible melisma. If the show is a positive indicator, then Ginuwine has the ability to refresh his career as a crooner of intimate RnB backed with Go-go inspired instrumentation, a decision that could make his fans, the genre, and his hometown proud.