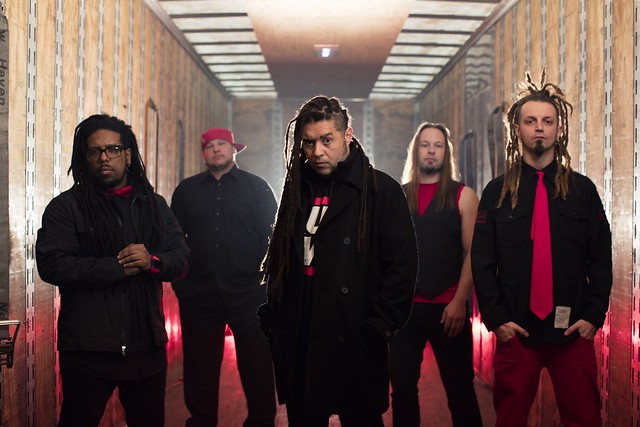 Fort Lauderdale heavy metal band Nonpoint published their ninth studio album, The Poison Red, last summer via Spinefarm Records. The album was the first featuring new lead guitarist BC Kochmit from the prolific band. These guys like to stay busy, and they are hitting The Fillmore Silver Spring on Friday, Feb. 10, to open for Alter Bridge on The Last Hero Tour.

Elias Soriano (vocals), Robb Rivera (drums), Rasheed Thomas (guitar/vocals), Adam Woloszyn (bass), and BC (lead guitar/vocals) most recently released their single “Divided… Conquer Them” from their new album in November. It followed on the heels of earlier singles, “Generation Idiot” and “El Diablo.”

Watch the official music video for “Divided… Conquer Them” on YouTube:

Writing for New Noise Magazine, Nicholas Senior praised Nonpoint’s lyrical and musical growth on the new album, saying, “As with the lyrical diversity, Nonpoint really pushed themselves musically here. Sure, their signature groove is on fine display throughout, but each of these songs has a distinct voice, and songs use blues, thrash, southern metal, and, of course, Latin flourishes to great effect.”

Be sure to get to the show early to catch Nonpoint when they open for Alter Bridge. Buy your tickets online.