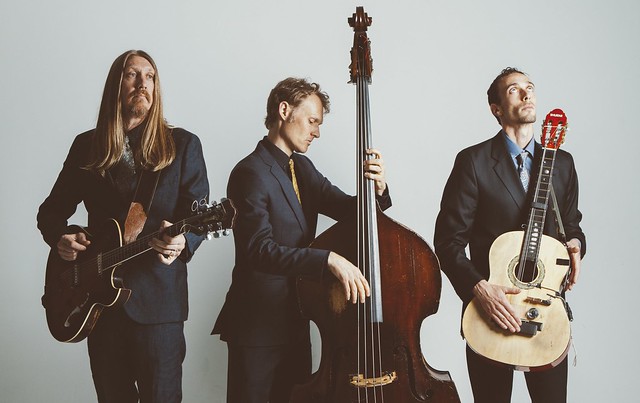 The Wood Brothers rocked 9:30 Club with a performance that left the crowd ecstatic on Saturday.

You could hear it as people made their way out; sometimes as you leave a show, you can notice some disappointment from the fans. Maybe the band didn’t play long enough. Maybe they played too much of their new material. Maybe they sounded bad. None of this was the case. The sold-out room enjoyed every bit of the show—and so did I.

Where do I start? The Wood Brothers consists of Chris Wood (bass), Oliver Wood (guitar, lead vocals), and Jano Rix (drums and keyboards). They play a mix of blues, folk, and rock. What makes these guys special is that they have taken their talent and invested it to create a really great sound. That being said, I am not going out on a limb when I say that Chris is the most talented bass player I have ever seen live, apart from Flea.

I enjoyed his bass playing on their album recordings, but I did not fully appreciate it until I saw it live. It was clear to see how heavily his basslines were influenced by his background in jazz. The things he was doing on the upright bass were incredible. His brother Oliver has a voice that only so many are blessed with. His singing and guitar playing are a throwback to the ’60s and ’70s, and it’s pretty clear that much of his inspiration comes from that era.

As for Jano, I don’t even know what to say. He played drums; he played keyboards; he played drums and keyboards at the same time. He played this strange contraption called the “shuitar,” which has the body of a guitar but it is a percussion instrument. Below is a video of him explaining it and showing how it works. SO cool. This is one of those bands that you can enjoy even if you have never heard their music before. Here’s a few of my favorite tracks.

They also have a new album that was recorded live (with the exception of one song) at Levon Helm Studios aka The Barn in Woodstock — called, you guessed it, “Live at the Barn”. You can check that out on their website at http://www.thewoodbros.com/music/.

This sounds cliche, but I will say it anyway: Do yourself a favor, and go see The Wood Brothers when they come to your area. If you have to travel a bit, do it. You will NOT regret it.

I enjoy almost every show I go to because I love music, and I am an optimist, so I can always find something good in a performance. I am not exaggerating when I say this was one of the coolest shows I have ever seen. If you have the opportunity to go see them, I think you will agree.