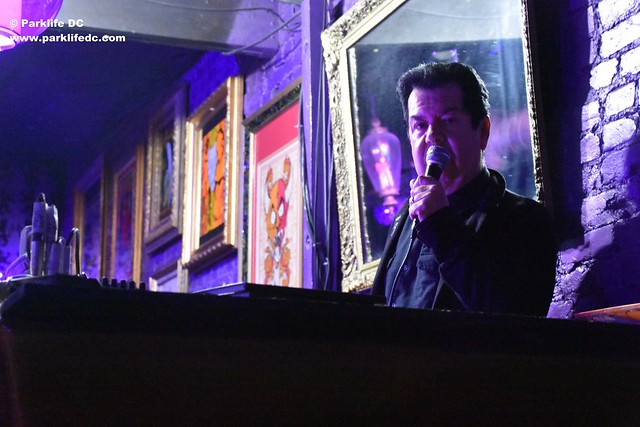 Way back in 1980, when I was in a grade school, a classmate brought The Cure compilation album Boys Don’t Cry into our classroom.

A handful of us gathered in a reading corner, where the boy sat his boombox and played “Killing an Arab” for us. Even though we were only aged in the single digits, we realized we were listening to something remarkable.

Appearing at Little Miss Whiskey’s Golden Dollar for the Kiss Kiss Bang Bang dance party on Wednesday, Lol Tolhurst, one of the three founding members of The Cure, recalled being a young existentialist in his early days of the band, citing it as a reason he didn’t record or take notes on much of anything. He was committed to living each day to its fullest.

In a group chat with Lol, I connected the same dots that I connected about a boy and asked him if his existentialism fueled The Cure’s songwriting, and if the other members also considered themselves existentialists at the time. “Killing an Arab,” you see, is inspired by the 1942 book The Stranger by the philosopher Albert Camus.

As he was on a tour to promote his own book, the memoir “Cured: A Tale of Two Imaginary Boys,” Lol acknowledged that he had not addressed a specific influence in his story of how he and Robert Smith grew up, formed The Cure, grew apart, and returned to being friends again.

A French family lived nearby Robert and him, Lol recalled to me, and the boys often would go over to see a young lass who lived there. The girl’s mother kept a library of French books, including Camus, that the boys would raid, absorbing existentialist literature as much as they could. That in turn helped to inspire their burgeoning existentialism, which of course would often show itself in its early songs.

As a DJ, Lol played the sort of stuff you would want him to play — Bauhaus, Siouxsie and the Banshees, Bauhaus, New Order, Soft Cell, and The Cure. I left the party with the satisfied memory of Lol singing along “One Hundred Years” to himself as he played it for the room.

In a small way, a circuit became complete.