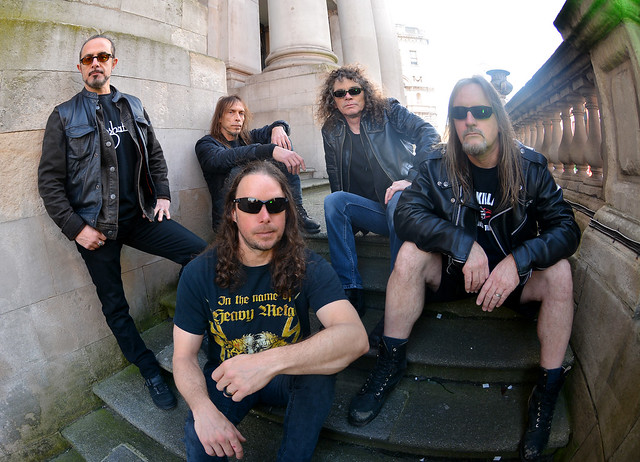 Thrash metal men Overkill are still going strong, releasing their 18th studio album, The Grinding Wheel, on Feb. 10 via Nuclear Blast and eOne Music. They are touring in support of it with a show at The Howard Theatre on Wednesday, March 8.

In a review for AllMusic, James Christopher Monger of AllMusic lauded the new album: “Produced by the band and mixed by Andy Sneap, the 10-track set… snaps necks with impunity, but it does so with a structural inventiveness that’s eluded some of Overkill’s most recent offerings. While the band hasn’t lost its knack for dropping unrelenting artillery blasts of breakneck, old-school thrash — “Goddamn Trouble,” “Red, White, and Blue” — there’s a nervy, classic rock/NWOBHM undercurrent that runs through Grinding Wheel that owes more to Judas Priest and Accept than it does Testament and Metallica.”

Watch the official music video for “Goddamn Trouble” by Overkill on YouTube:

Overkill founders Bobby “Blitz” Ellsworth (vocals) and D.D. Verni (bass) have been blazing this trail since 1980, and guitarists Dave Linsk and Derek Tailer have been thrashing alongside them for about half the life of the band now. These guys are ready to kick some ass, and they are bringing death metal band Nile and supporting bands Amorphis and Swallow the Sun along with them.