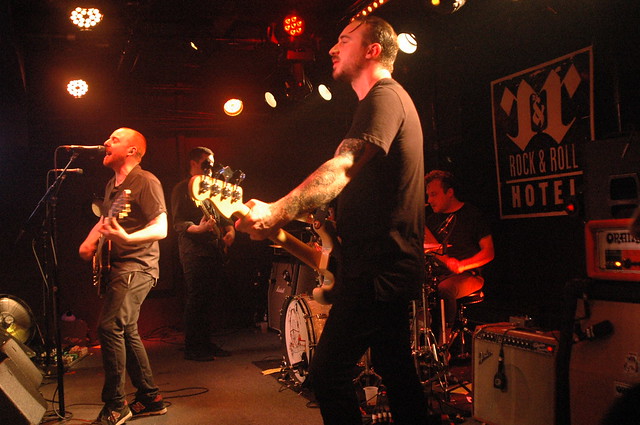 The Menzingers hit Rock and Roll Hotel on March 29, 2017. (Photo by Daniel Webb)

The Menzingers zipped into a sold-out show at Rock and Roll Hotel recently in the wake of the release of their fifth studio album, After the Party, their third on Epitaph Records.

The Philadelphia punk quartet visited March 29 while winding down a grueling lengthy North American tour before embarking on a European tour (where they will find themselves in a week).

So, I am a huge fan of The Menzingers, and they completely demolished the stage. The entire lineup was solid with openers Rozwell Kid and Jeff Rosenstock (yes, the frontman of the erratic punk/ska band The Arrogant Sons of Bitches), two absolutely kick-ass bands and excellent precursors to the exciting high-energy atmosphere that comes with The Menzingers playing live.

As the lights kick in after the setup, the wailing guitar intro of “Tellin’ Lies” (a song poignant to the late 20s/early 30s crowd) breaks through to usher in their set. The Menzingers’ set spanned their past few albums (predominately On the Impossible Past, Rented World, and the new After the Party) but focused mainly on the more kinetic popular songs in their repertoire, and there happens to be quite a few! 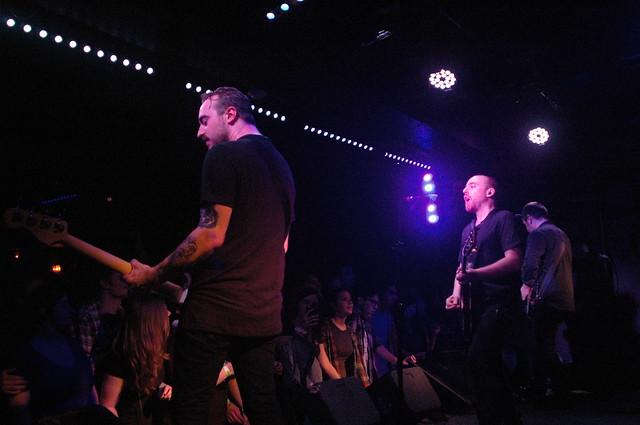 They played songs like “I Don’t Want to be an Asshole Anymore,” “The Obituaries,” “After the Party,” and “Your Wild Years,” to which the crowd belted every last word, or scream. Not for a second in their set was there a dead moment until they left the stage for a two-minute pre-encore breath-catching period. They came back to end on “In Remission,” a strong song from Rented World, before calling it a night.