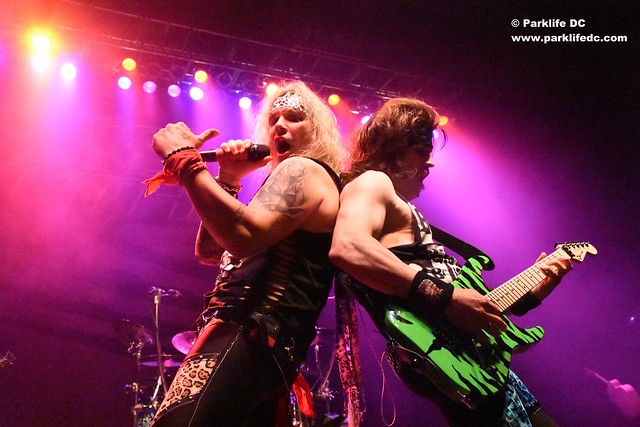 Steel Panther perform at The National in Richmond, Virginia, on Monday, April 17, 2017.

To hear the roar of Steel Panther is to flash back to glam metal glory days of the 1980s, emphasis on the flashing.

Part celebration and part spoof of the heyday of Van Halen, Motley Crue, Poison, and similar bands, Steel Panther presented a well-rehearsed comedy routine that emerged in their banter and their rudest and crudest songs. Clearly, band founder and guitarist Satchel did not actually recruit vocalist Michael Starr off the streets in 1981 to front a band known for songs like “Asian Hooker” and “Fat Girl,” as humorously discussed on stage. Still, there are points where the hard rock spectacle takes control, and women on stage are indeed “flashing” at the band’s behest as drunken men cheer their approval with the sign of the horns.

But as evidenced by a crowded, rowdy concert at The National in Richmond, Virginia, on Monday, April 17, the show worked, and worked well, because the members of Steel Panther are really quite good at what they do. Add strong comedic timing to the very real talents of Michael, Satchel, Stix Zadinia (drums), and Lexxi Foxx (bass), and you have a show that is all-around bawdy fun. 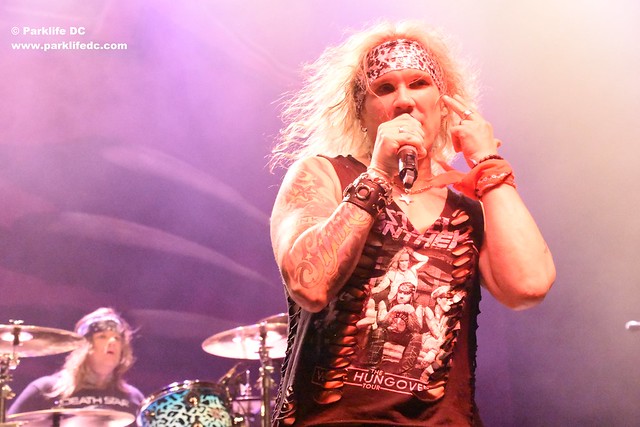 Steel Panther is touring on the release of Lower the Bar, their fourth studio album, published in March by Open E Music and Kobalt Music Recordings. The band performed songs from across their career, dating back to first major label album Feel the Steel in 2009.

But the guitarwork in homage to their favorite bands was rather spectacular, and Steel Panther played the hell out of their instruments. It came as no surprise to me that my favorite part of the show is when the muscular Satchel took the center stage alone while his mates took a break. Satchel shred through a guitar solo that left everyone in the room absolutely astounded. Satchel ripped through the very fundamental riffs of songs like “Eruption” by Van Halen, “Smoke on the Water” by Deep Purple, “Master of Puppets” by Metallica, “Sweet Child O’ Mine” by Guns N’ Roses, “Iron Man” by Black Sabbath — among others — and to the end with a very metal rendition of “Do-Re-Mi.” Sincerely impressive stuff, man! 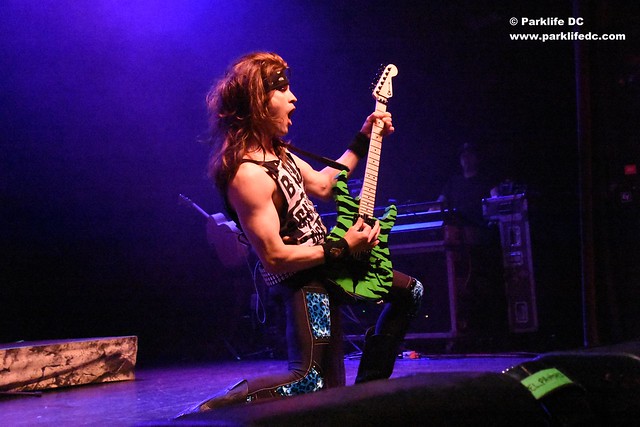 As Satchel seriously impressed on guitar, Michael proved a charismatic and fearless frontman, primping, posing, and posturing throughout the show with a tireless energy that would have left jealous even David Lee Roth at his most vital. Speaking of primping, my favorite comedic bit revolved around a recurring gag where bassist Lexxi is constantly checking his hair and makeup in a mirror whenever a spare moment allows him, prompting Michael and Satchel to throw barbs at his lack of machismo. 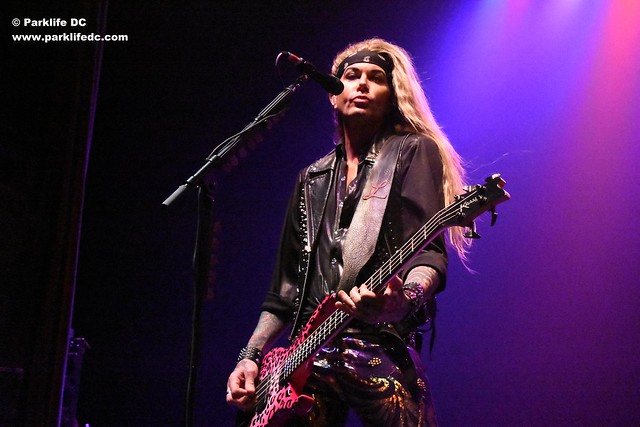 Of course, when called upon, Lexxi threw down with the rest of the band, forming a fearsome rhythm section with drummer Stix. Stix was a tireless piston of manic metal, sparking a combustive explosion of endlessly energetic drumming. The man is a master of percussion. 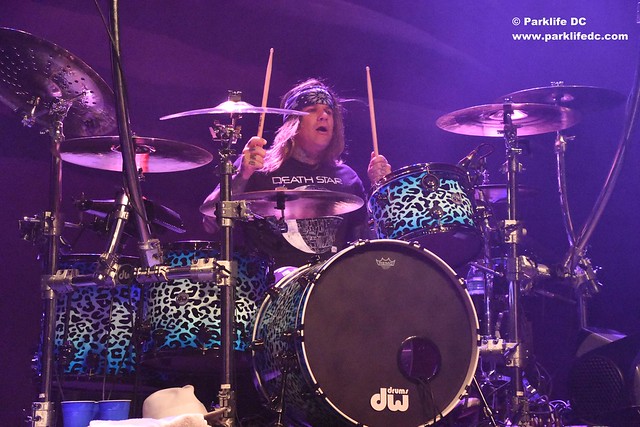 Usually, I am wont to give some analysis to the lyrical content of a band’s songs, but suffice to say that not much was left to the imagination with songs like “Back Door,” which you can suppose is not about a house, and “Tiger Woods,” which does nothing to suggest improvements in the man’s golf game. Steel Panther are best encapsulated by their closing anthem from Monday night, “Party All Day,” hailing from their debut album. It is what they do best.

Steel Panther continue their tour tonight, April 20, in Raleigh, North Carolina, as they blaze a trail toward wrapping up in Las Vegas on May 11. They will hit some dates in Europe and be back in the States for more rowdy fun later this year.

So celebration or spoof? If you see them, you’ll very much agree they fall hard on the celebration and less on the spoof than you might guess! Whatever the case, Steel Panther are truly a picture-perfect band. Here are some pictures of Steel Panther partying hard at The National in Richmond, Virginia, on Monday, April 17, 2017. 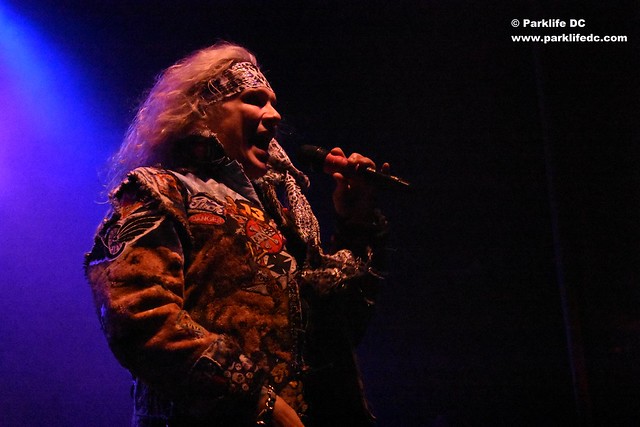 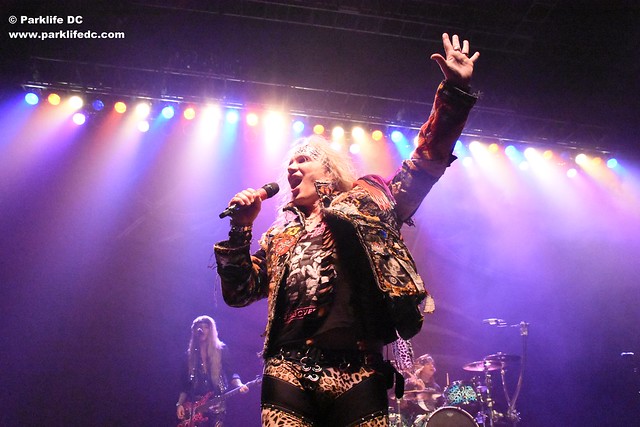 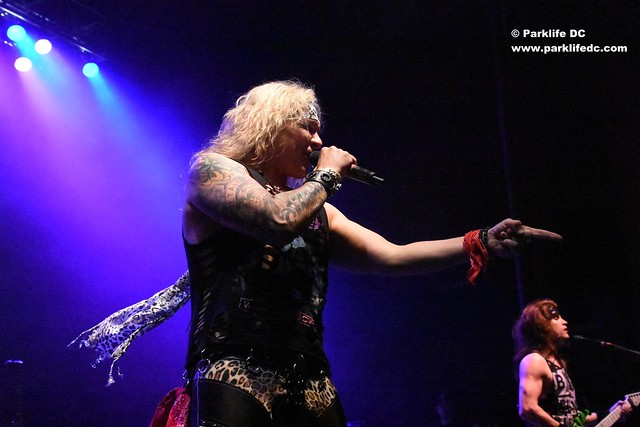 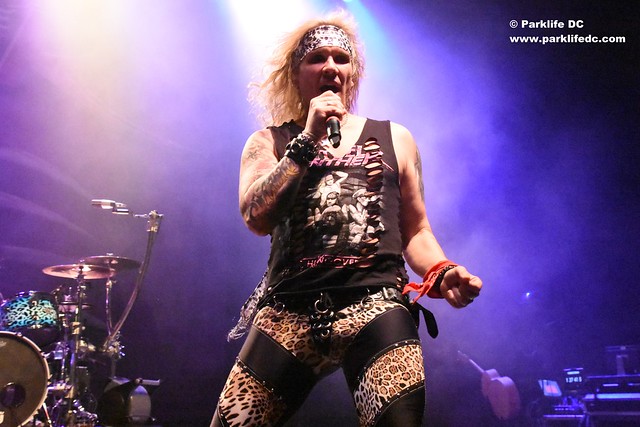 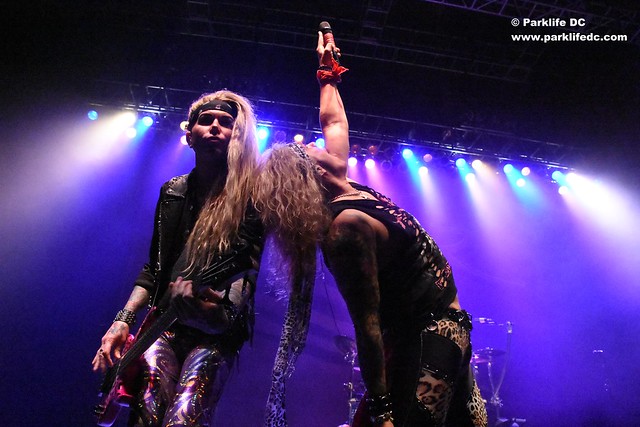 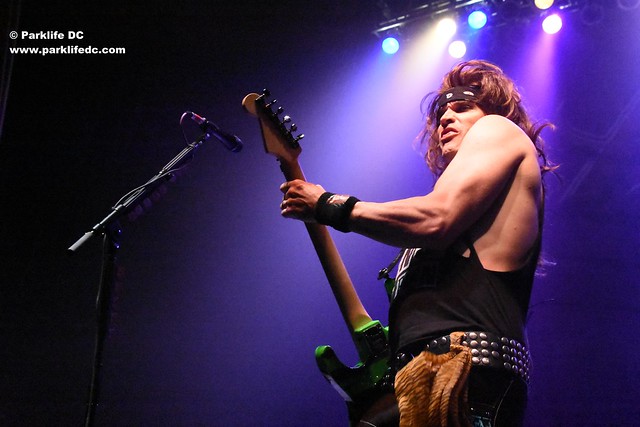 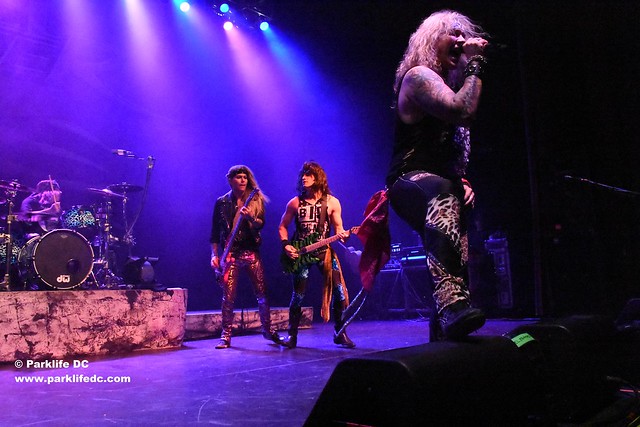 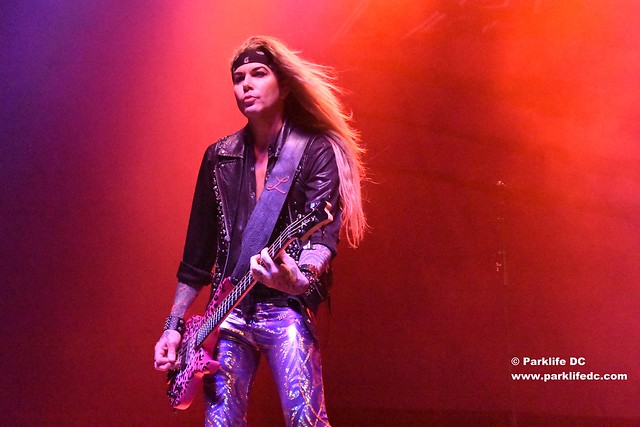 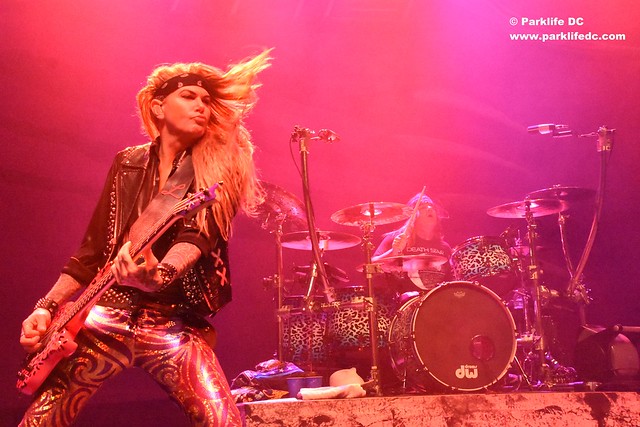 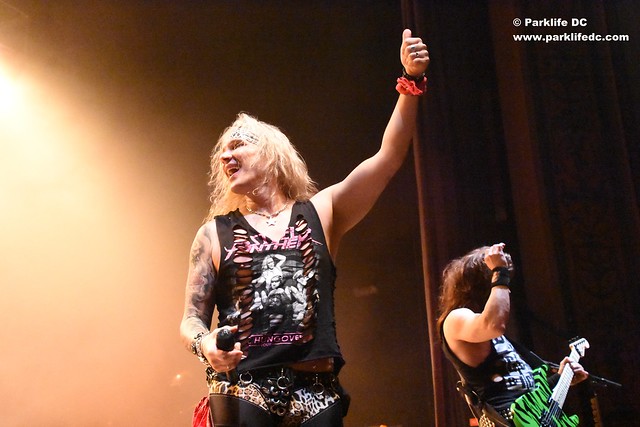 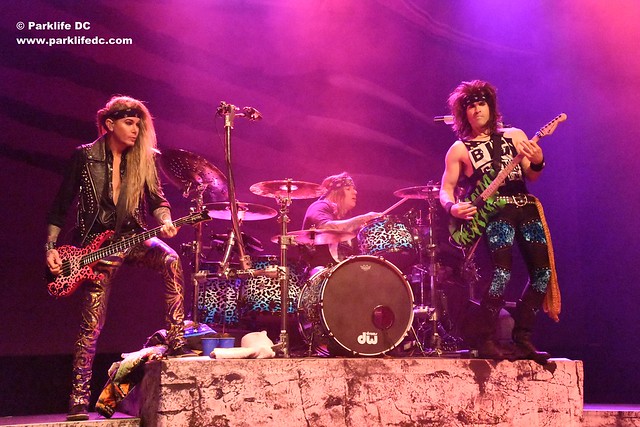 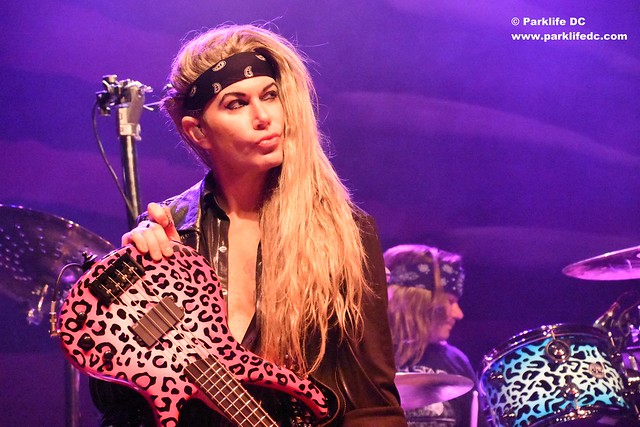 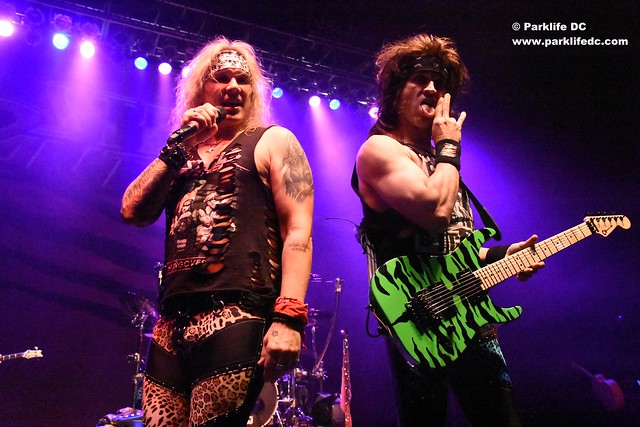