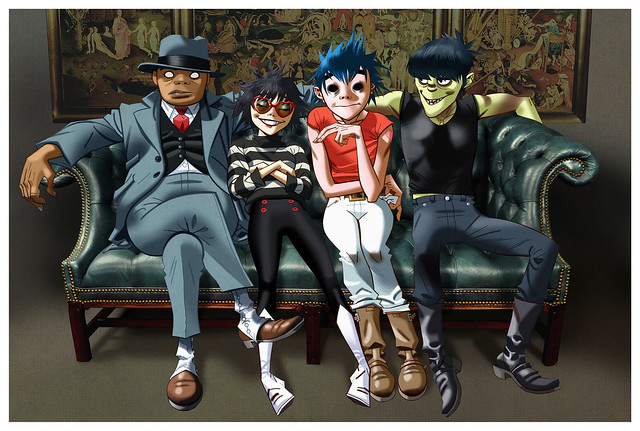 Gorillaz, the world’s must successful virtual band, will release Humanz, this Friday, April 28, via Parlophone and Warner Bros. Records. And your favorite animated band — Murdoc Niccals, Noodle, Russel Hobbs, and 2D – will hit the road for their first US tour in seven years, including a stop at Merriweather Post Pavilion on July 17. Tour venues in Chicago, Boston, and Philadelphia already have sold out, but tickets remain for Merriweather!

The UK quartet (the brainchild of Blur frontman Damon Albarn and Tank Girl cartoonist Jamie Hewlett) will tour North American for the first time since 2010, when they released their Plastic Beach album. Purchase of a ticket for the current tour includes a standard physical or digital copy of Humanz.

Watch the official music video for “Saturn Barz (Spirit House)” from Humanz by Gorillaz on YouTube:

“Humanz features guests at all stages in their careers, from reggae’s man of the moment Popcaan to gospel legend Mavis Staples. Albarn’s explained that each contributor was asked the same question: ‘Imagine a night where everything that you believed in was turned on its head. How would you feel?’ Regardless of the answer, the resulting collaborations had to convey ‘pain, joy, and urgency’ — and they do,” said Larry Bartleet in a four-star review of the album for NME.

Gorillaz is sure to provide a wholly unique concert experience. Buy your tickets online.